‘From a phenomenological viewpoint, in the photograph, the power of authentication exceeds the power of representation‘. (Camera Lucida: pg 89)

In my first review of Camera Lucida, I found the work depressing. Whilst there are important points of great merit (punctum, studium), ultimately I found it an overly-personal and complex exploration of death, especially as he considers the Winter Garden photograph of his mother. Camera Lucida also does not do justice to Sartre’s thinking, an overt inspiration for Barthes, in doing little to further the use of photography as a spur to innovation and creativity.

‘The circle is closed, there is no escape … I cannot transform my grief, I cannot let my gaze drift; no culture will help me utter this suffering which I experience entirely on the level of the image’s finitude.

On the other hand, I found Image Music Text had some very practical thoughts about analysing photographs. So, on this reading of Camera Lucida, let me try to be more optimistic about his logic.

Barthes states that he is a realist. He believes that every photograph had a real thing in front of the lens, without which there would be no photograph. He sees a congruence of reality and the past in each photograph – and given that this constraint only applies to photography, rather than, e.g. painting or sculpture, he considers this ‘capture’ of reality …

Depiction seems open to the interpretation of viewer, whilst a copy is exactly that – the same and only thing, with no hidden meanings. No codes.These would seem to be his root definitions of authentication and representation.

In Image Music Text, Barthes had maintained that a photograph holds a potential paradox. It contains the co-existence of denotation, a message with no code, which underlines his view that all photographs have a root in some kind of uncoded reality, and yet conceding that all images also have a connotation, a rhetorical code within the image.

Seemingly in contradiction, in Camera Lucida, Barthes questions whether asking how a photograph is coded can be a good means of analysis, as the photograph bears testimony to the effect of time and not to the subject itself.

So what does he really mean? First, some definitions to help unpack things.

Authentication: the process or action of proving or showing something to be true, genuine, or valid.

Reality: the state of things as they actually exist, as opposed to an idealistic or notional idea of them.

Representation: the description or portrayal of someone or something in a particular way.

If we take a literal view that the reality of an image may be less open to interpretation amongst different viewers than decoding its meaning, which could have many interpretations, then we would concede Barthes might be right. This requires that whatever is depicted is reasonably clear in the photograph, straightforward in its details, and not open to much debate.

Consider the Hindenburg disaster. Sam Shere’s image has considerable punctum. It is almost impossible not to be drawn to this image, and then ponder and linger on the details within it, especially on first viewing. 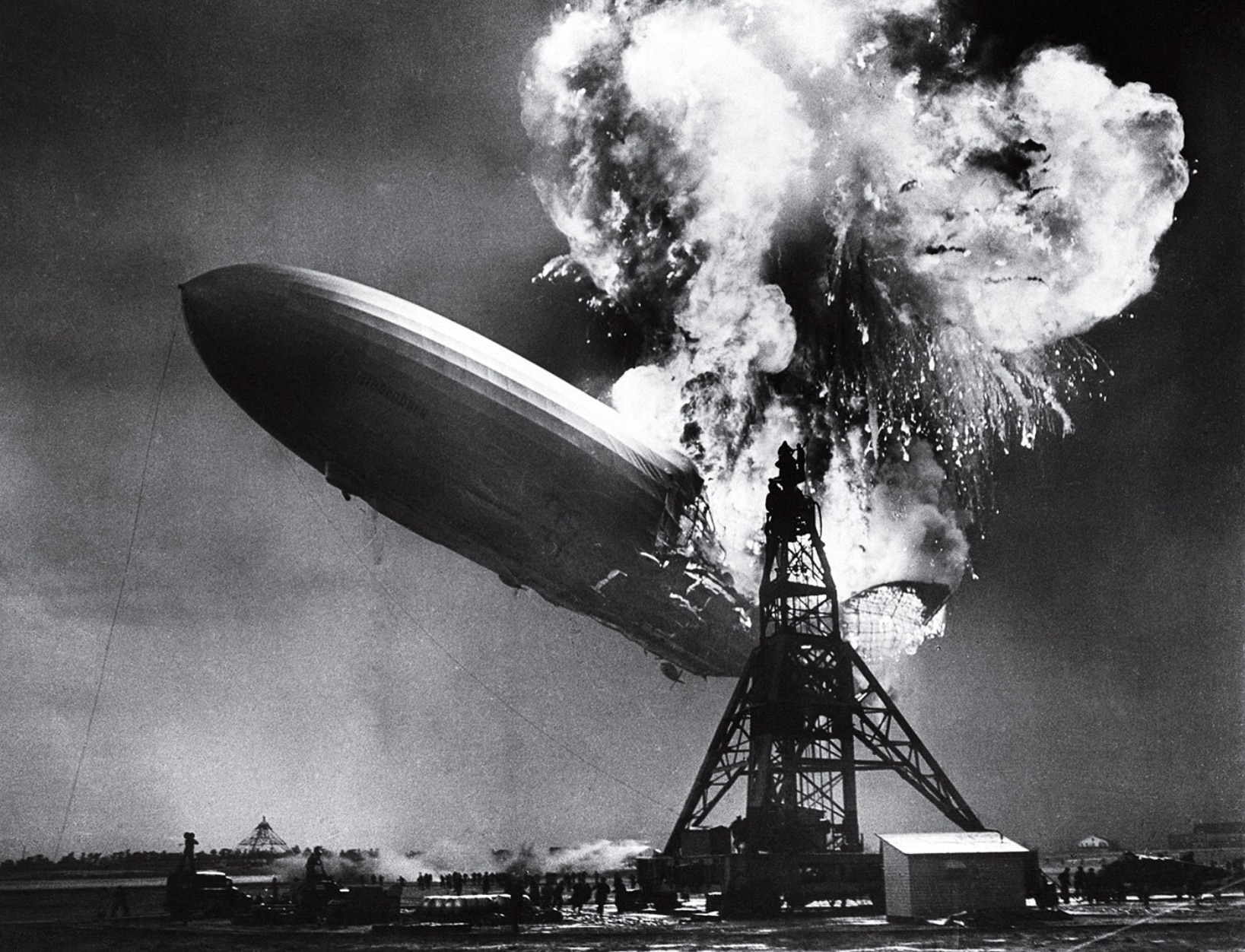 From an ‘authentication’ viewpoint, it is an accurate record of a real event. Other images were taken that day, by other photographers, with essentially the same view, confirm its accuracy. Analysing the image along Szarkowski’s lines, or those of Snyder and Allen would reveal much depth to the facts surrounding this photograph and the event depicted. There is a wealth of studium in this photograph.

However, from a ‘representation’ viewpoint, the image can have many different readings, beyond a simple record of events, depending on the predilection of the audience. The accident was an embarrassment to the pride of Nazi Germany (politics). It was a significant moment in the history of air travel (history). It impacted air traveller views of safety (psychology, sociology). The accident contributed to the demise of Zeppelin production (engineering) and the dominance of airplanes and airports as we know them today (economic, industrial history, urban planning). And of course the image contributed significantly to the history of photography itself (culture).

There is also power in this image, though in several ways. The historic nature of the event; the punctum of the overall composition; the punctum of the fine details in the image; and the range of denoted meanings, depending on the viewer’s own context. So, when Barthes talks of power, we need to be careful of the word. Wittgenstein would say that the definition of the word depends more on how it is used than some theoretical concept. Barthes would have done better to unpack his own meaning, possibly allowing the possibility that there is some congruence in his thinking between power and punctum.

Stepping back, I believe that the punctum of this image strikes first, especially if the viewer is not familiar with the history. There is then much studium to ponder, and various meanings to consider. Of course, others may see the studium first. Either way, Barthes’ fundamental distinction is helpful in considering a photograph and what truly engages the viewer. 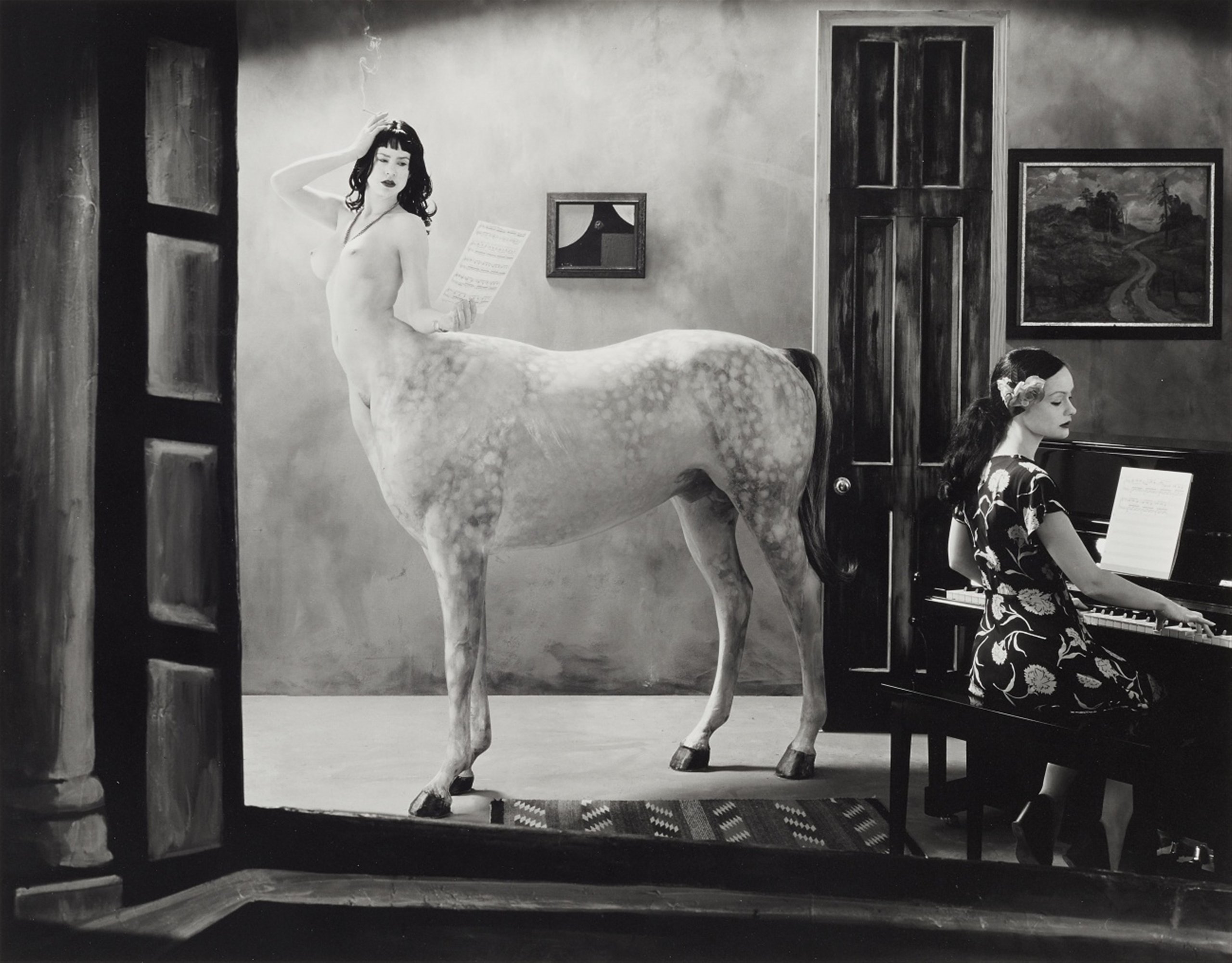 This image has both positive and negative ‘authentication’ value. The girl playing the piano looks like an actual person – a positive. The Centaur, however, just cannot exist, so in a sense is negative authentication. Taken together, however, the negatives outweigh the positives. The photograph has no overall reality, and is an artificially constructed image.

Yet, it could have several connoted meanings – an allegorical story (although that would work better with explanation), musing on the arts, a representation of a dream and so forth. In this case, the ‘representation’ aspect of the image has more power than its ‘authentication’.

I would conclude that generally speaking, Barthes is right – authentication before representation. But, and is is a significant philosophical but – Barthes’ logic in Camera Lucida remains imprecise, and he would have benefitted from using more examples and much tighter logical analysis to examine his point. It is interesting that Barthes, as a leading semiotician, doesn’t always drive home the deconstruction of his own thoughts on photographs, often preferring a rather subjective, personal view (witness his focus on the Winter Garden photograph).

For Barthes the semiotician, he believes that we seek signs everywhere. These signs are a combination of the signifier (the object) and the signified (the meaning). This distinction clearly underpins his definitions of denoted and connoted meaning of a  photograph. In the middle is the practice of semiology, the exploration of the relationship between the signifier and signified.  I suspect this weakness in Barthes’ analysis of photography may be directly related to the fact that, by his own admission, he is not a photographer.

Whilst the broad sweep of Barthes’ thought is both helpful and powerful (in the sense of thought provoking), I think other writers, such as Stephen Shore do a more thorough job of creating a framework for deconstructing the signs within a photograph, with a view to helping us both analyse and create.

As to the implications for my documentary practice, there are two.

First, I need to continue to capture the details of the narrative that I am attempting to create in as accurate a way as I can.

Second, I also must continue to find creative approaches to engage my audiences (in Cambodia, and also in the West), to help them fully understanding and contextualise the historic and social meaning of the genocide, and its impact on individuals who survived.