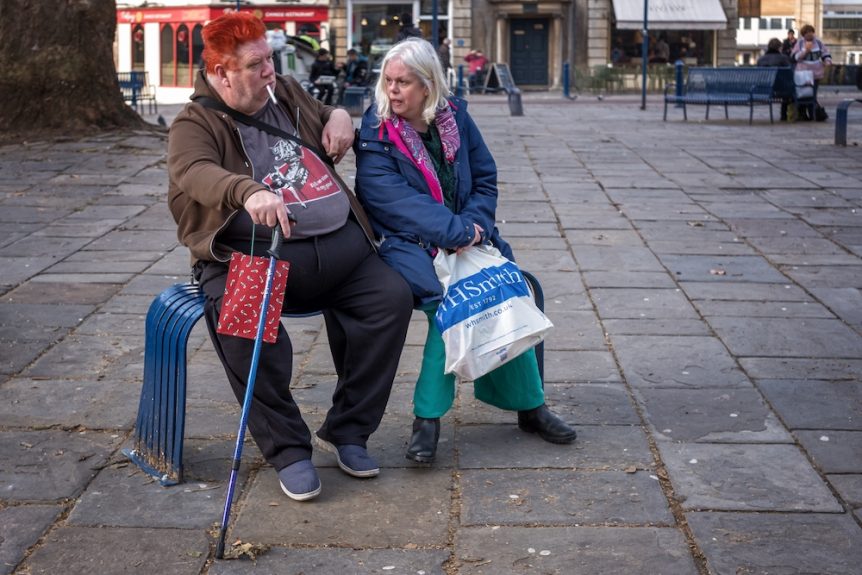 I used to do a lot of street photography, although most recently I have been a little bored by it – in the sense that there is a lot of ‘opportunistic’ street photography being shared on social media, rather than images with some meaning. Those images can also sometimes veer into exploitation of the subject – one could include some of Bruce Gilden’s work in that category – which raises questions about the ethics of street photography. Just because you are legally allowed to take a picture, it doesn’t mean you should.

I have come to think that a lot of ‘street’ is about capturing in a single image a moment of light or a dramatic composition, with relatively little thought about the people who are the subject of the photograph. Henri Cartier-Bresson has a lot to answer for. There is nothing wrong with that ‘decisive moment’ work, but it no longer really floats my boat. Instead, I am conscious of seeking a story whenever I pick up the camera.

For example, I took this last week, when meeting with some of my Frome Wessex Camera Club friends. I called it ‘Good News from God’, because, in the bottom left corner, the magazine title is exactly that. The image captures a group of Christians, who whilst not missionaries in the strict sense, are indeed propagating the world of God. 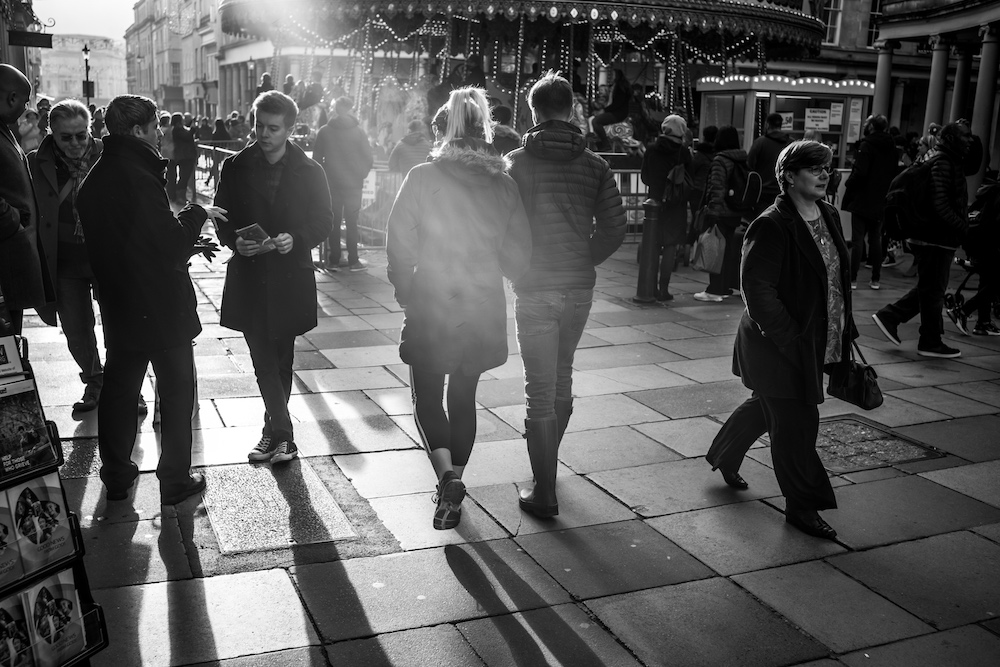 I also took the image in the header, which I titled ‘Ain’t no Shame in my Game’, because the man’s t-shirt has that written on it.

Both images were quite well received on social media, although a dialogue that ensued on the later image was quiet thought provoking.

A: This picture has been on my mind ever since I first saw it here. For me, it raises a lot of internal dialogue. Does street photography say as much/more about the photographer than the subject? Should I tell the man that his picture is here? Does he know that already? Do you know them? Did you know that this man continues to fight all manner of afflictions and recently lost 4 stone?

Mick: Indeed it does raise questions – deliberately. Photography is a triangle of subject, photographer and audience.

H: Clearly the cream of humanity … I do truly worry abut the world that my children and their children are going inherit.

T: How about the world that YOU have inherited? What will you do about this, amigo?

H: That is a good challenge. Like the rest of us I try to have my say at the ballot box in the hope that the UK will be steered in a direction that favours everyone. I also try and behave and treat others the way that I would like done to me.

P: Exactly. All too easy for the privileged middle class to demonise and blame others whilst remaining blissfully ignorant on the part they play in the very thing they despise. We’re all humans, sooner we accepted and embraced that the better place the world would be.

Well done Mick for making this a thing of interest and humour beyond the simplistic demonising of a different class.

Mick : I’ll take that as a compliment. Thank you.

P: And that is exactly why you are contributing to the problem that you fear your children will ‘inherit’. You expect others do sort stuff for you and you are totally hypocritical in your statement ‘treat others as …’ because you did the total opposite of the two people Mick has captured.

I think what you meant was treat others ‘like you’ in a way you would want to be treated, yet ‘others’ should be treated otherwise. That is the world your children are destined to inherit unless you stop expecting others to change things for you. But hey, maybe your right and the privileged middle class will inherit the world! Certainly what many seem to want …

H: Next time I’ll just keep my views to myself ..

Mick: I am very happy to have differing views on my timeline. I think that street photography always raises some interesting issues, that can sometimes go quite deep. And the viewer ‘projects’ onto an image of people in ways that are unpredictable. So that’s all fair enough.

T: H, I think they have been a bit harsh with you. I think your intention was fine, just a bit clumsy with wording. It would be sad if it stops you from freely expressing yourself.

H: Thank you. My wording is exactly how I feel – still is – and I still worry. What I choose to do about it to reduce that worry is for me to make.

P: I fully support freedom of view and the right to express them. Equally I fully support the right to have said views challenged and questioned. I am also very aware of the power of photography to portray people in a stylised stereotyped way. The current ‘fad’ of street photography does that all too often. I know that was not Mick’s intent, but I read your comment as demeaning of the subjects in the photograph. If I misunderstood then I retract my comment.

Mick: H, I always like honest views, my friend!

H: Demeaning the subjects, no. Their social choices are theirs to make, and I respect that.  P: ‘Clearly the cream of humanity’ as a compliment of the people portrayed then… as T says, choice of words too easily misread as meaning the opposite.

H: OK, so maybe it was “clumsy” in that respect. Perhaps what I’m trying to say is that their choices would not be the ones that I’d choose, but that is in no way intended to insult them. Additionally, appearances are deceiving (a point I should have considered before hitting Enter). Some of the nicest, politest, gentle, generous and caring folk I’ve ever met dress in black, had bright pink hair, have half a tonne of metal inserted in their face, and listen to electric guitars at ear bleeding volume! Yes, I did go through a heavy metal phase

H: … and the point about my children – I do worry about the state of British culture and values in the future.

P: H, all to easy to say things that others interpret differently than the intention. Believe me I know. (Mick will have no comment on that).

H: I know that P. If anything Mick’s photograph has illustrated that point perfectly.

J: What others ‘see’ in a photograph, and how they comment about the subject matter says so much about themselves. However, social media also has that special habit of allowing the reader of comments to misconstrue the meaning meant by the commentator 😉 Street photography starts with the choice of subject of the photographer. The rest is interpretation of the viewer.

Mick : I do agree. I would add that, whilst the photographer has a responsibility in his or her choices, then so does the viewer – and the editor/curator

So, what do I conclude from this?

I have noted elsewhere that I will not publicly show images which in some way demean or make fun of the subject, unless they are party to the capture.

In this case, whilst I was standing in full view taking this picture, the couple were so engrossed in their conversation that they did not notice me. I decided that the image was telling a story, and so posted it.

It is indeed fascinating how different audiences view images such as this, and the emotion it engenders.

The learning? Every image indeed does have three components – subject/photographer/audience – which are essential to its interpretation.

And whilst this image was in theory a simple ‘documentary’ one, it raised significant questions.