In a combination of interests, I have been creating a database of my Facebook ‘likes’ for quite some time, as a source of analytical understating, both of my photographs and on how Facebook works. That is the problem with being both a photographer and a data geek. I note which Facebook Groups are used, and record the details of the photograph – genre, camera etc. It has become automatic to check things with my morning coffee. Of course, some people will argue that ‘likes’ don’t mean very much, and others will argue that ‘likes’ are why we post. Either way, I see it as a way of gauging audience reaction. With a database going back over 5 years, it does give sensible reference points.

Until yesterday, my most ‘liked’ photograph was a rather grainy film image from 1972 of two dogs in a Land Rover. This had been posted in a few street photography and 35mm film-oriented groups, as well as on my own timeline. Click on the image to see it larger. 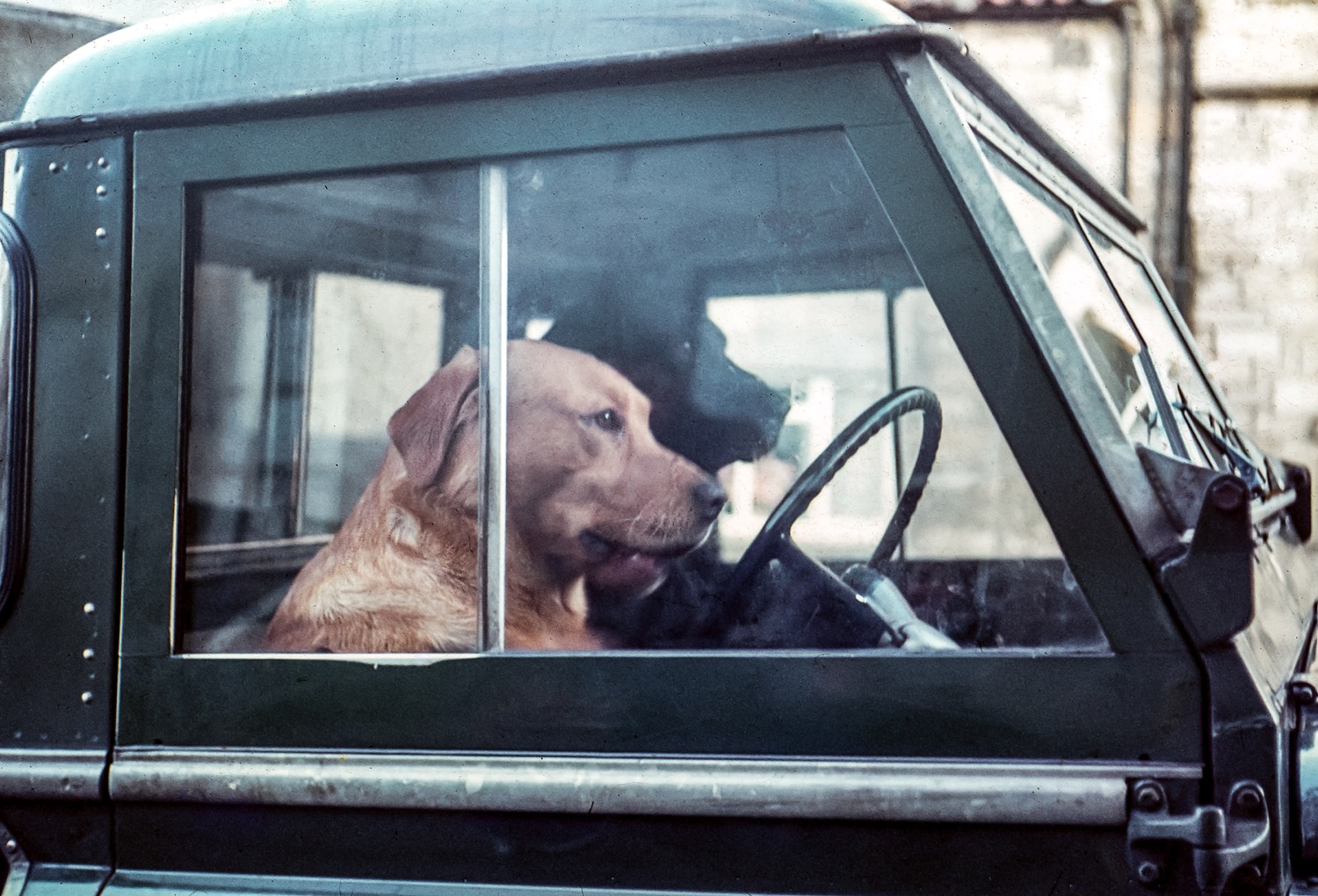 I have separately written how this image invited a little good-natured online debate about whether it was a street photograph or not, as whilst taken on the street in the normal, candid style, it has no people in it. These days I subscribe to the idea that ‘street’ is ‘candid public photography’, which really includes people in it. But maybe that is hair-splitting. Ironically this photograph was rejected by one of the leading Facebook street groups, yet accepted in a  portrait group.

It is not an exact science to compare ‘likes’ for photographs as they will feature in different numbers and types of groups, the membership – some big, some not – and the audiences have varying levels of engagement. Yet, it is striking that my top 4 photographs of all time are all scans of ‘old’ 35mm slides. In fact, 6 of the top 10 are film. 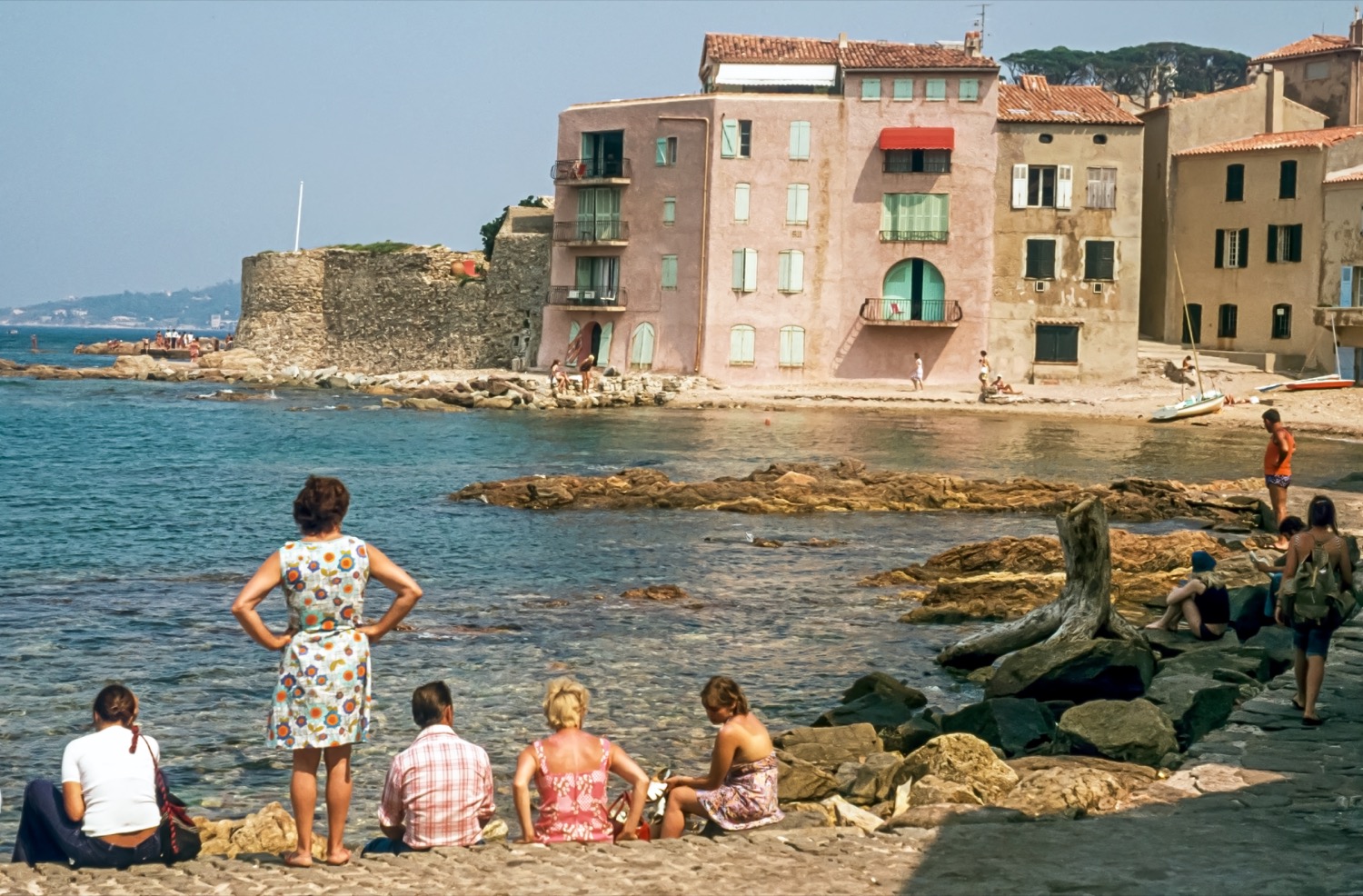 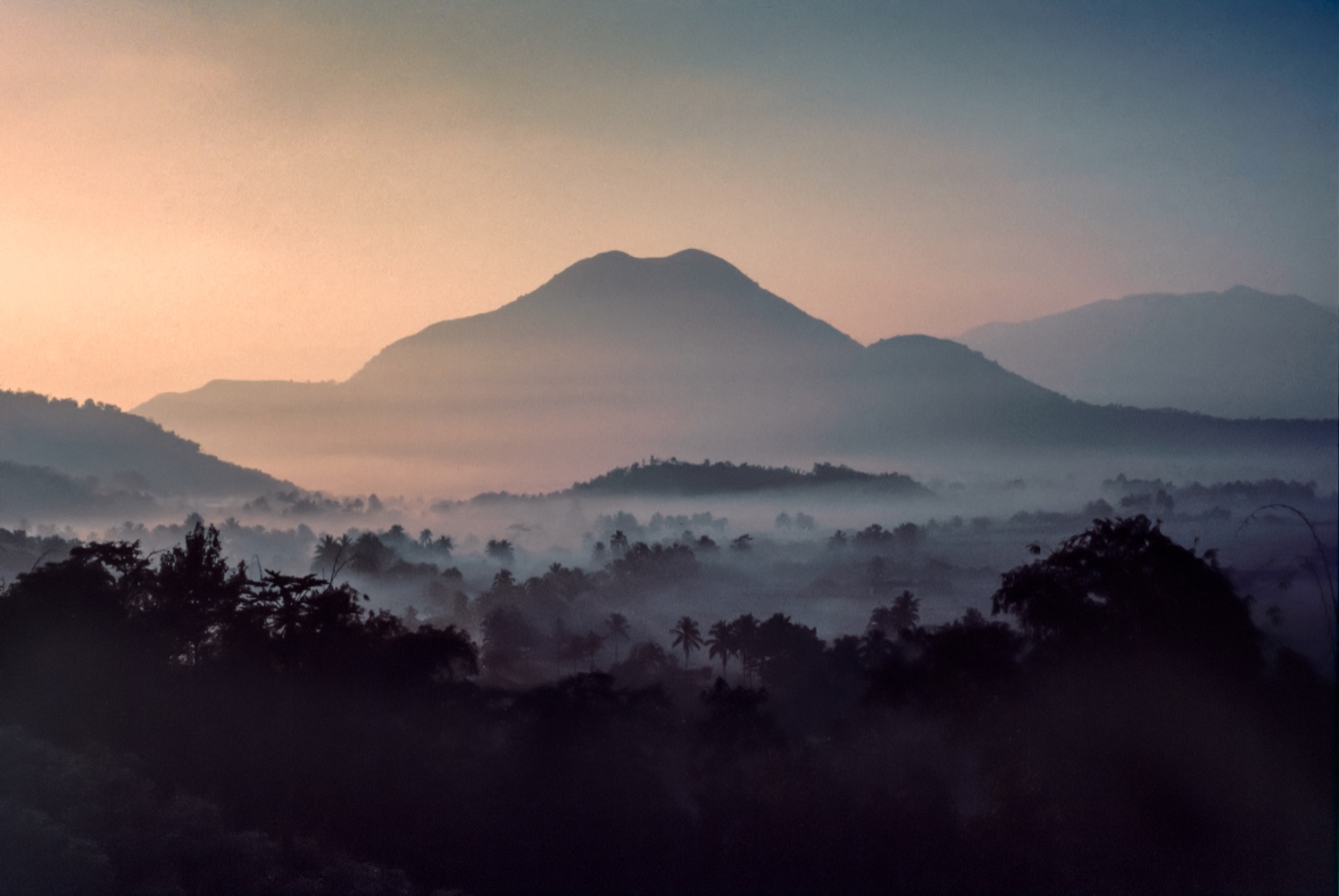 Today’s top image is now this one, below, The Boys are Back in Town. 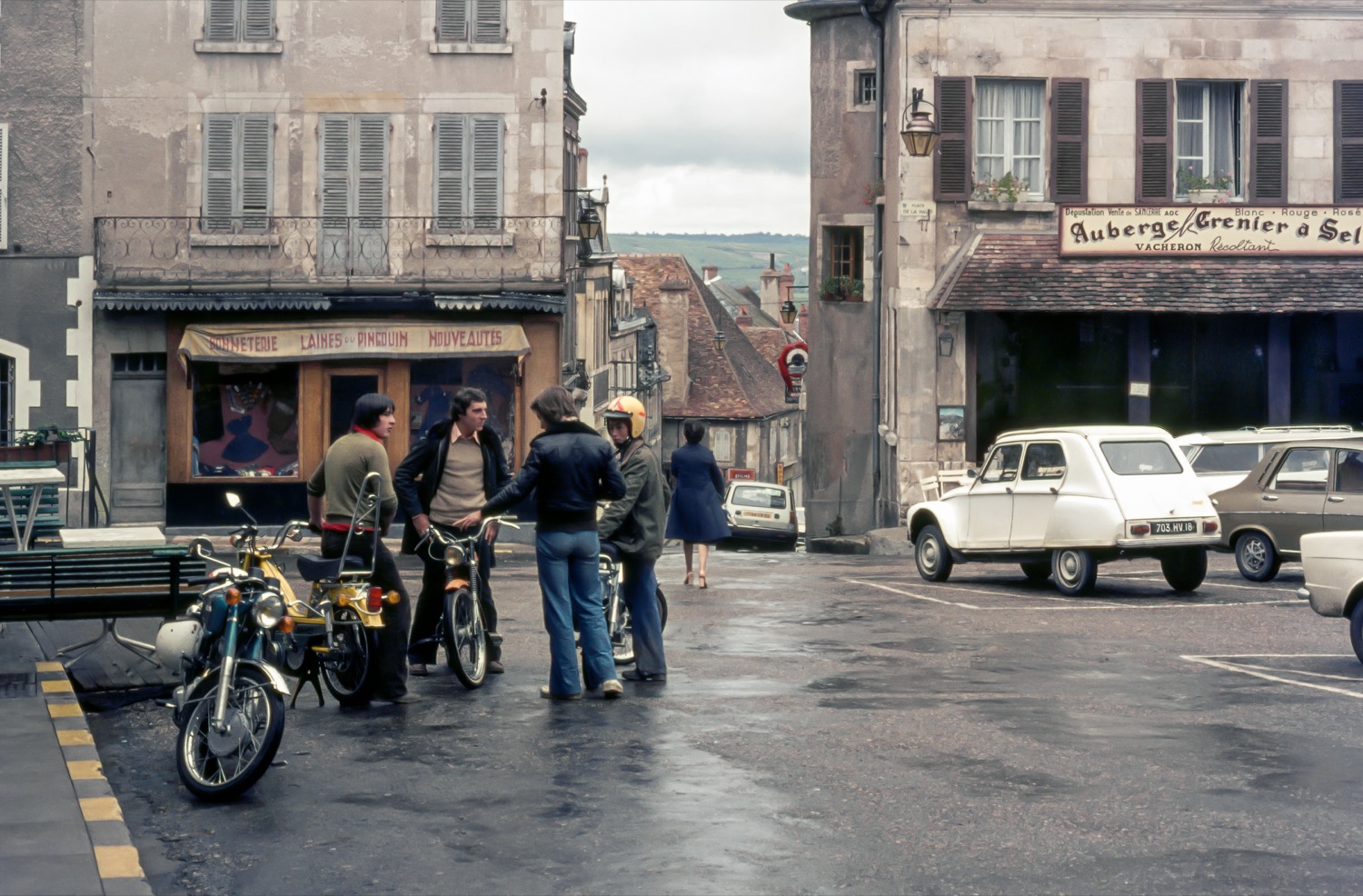 This photograph truly surprised me. It so far has received over 1770 likes, driven mainly by 4, 35mm film groups. By contrast, the other three images above received less than half that, at around 700 each, from the same groups. It is probably an example of the viral mechanism of Facebook’s algorithms, as when something is getting attention, it gets pushed higher up the group so others see it.

But why this photograph in particular? For anyone familiar with France, the colours seem typical of so many villages and towns. This sense of historic time and place is playing a role in audience response. Certainly that shows in comments on Facebook such as

‘Oh my! That’s exactly how I see my parents twenties’, ‘Your photos make me wanna go time travelling‘, or ‘Fantastic window back to that different era, nicely composed too‘.

Photographs seem to take on more meaning with the passage of time. And several people knew the location well enough that it had meaning for them.

‘I once drank Sancerre in Sancerre. Still my favourite white, when I can afford it!’

The original slide had discoloured and faded somewhat, although even then the street colours are clear. 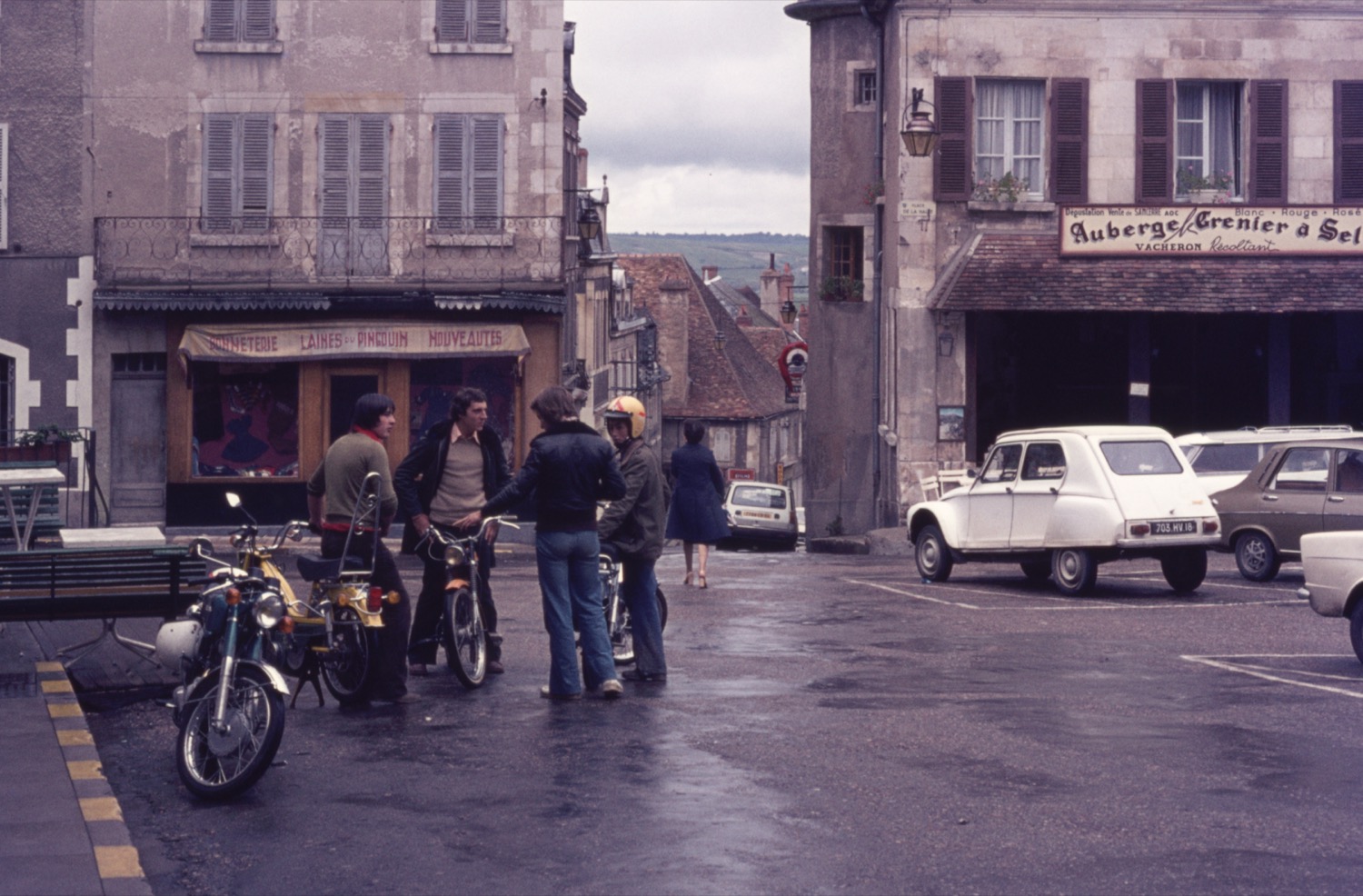 As is my normal workflow, I flat-scanned the slide, took out the purple cast, adjusted contrast (the original was also fading slightly) and corrected the white balance in Lightroom. The cars gave excellent reference points, so I am confident of colour match. I try hard not to over-process anything – I’ll leave the viewer to judge.

Technically, the loupe shows that the underlining image quality is good – the Pentax KX and the excellent 55mm F/1.8 lens was my staple apparatus for almost a decade, and it still delivers very sharp photographs. The camera is pictured in the header, above. It’s still lovely.

I have noted before that the discipline of shooting slides forced the photographer to consider ‘getting it right’ in the camera – exposure and composition. The image is full size and uncropped.

Perhaps the title also adds to audience involvement. Somewhat subconsciously, I called it ‘The Boys are Back in Town‘. This is a famous track by the Irish band Thin Lizzy, led by Phil Lynott until his untimely death. The title just seemed to fit the group of young people hanging out in the square with their bikes, like young people do all over the world. However, it needed a comment from a viewer on Facebook to remind me that the song was released in the summer of that same year, 1976. So, serendipity was at work in the choice of the title.

The photograph also seems to prove something of Roland Barthes’ suggestion that images have both Studium and Punctum – the former are the content and context, the latter is that often small thing which ‘pricks’ and make the viewer take notice of the image. Several people commented on the yellow bike, and those ‘sissy bar’ handlebars.

‘Love the yellow moped with the chopper bars and backrest’.

I’ll finish with my 5th highest-ranking image – this time, a digital one. 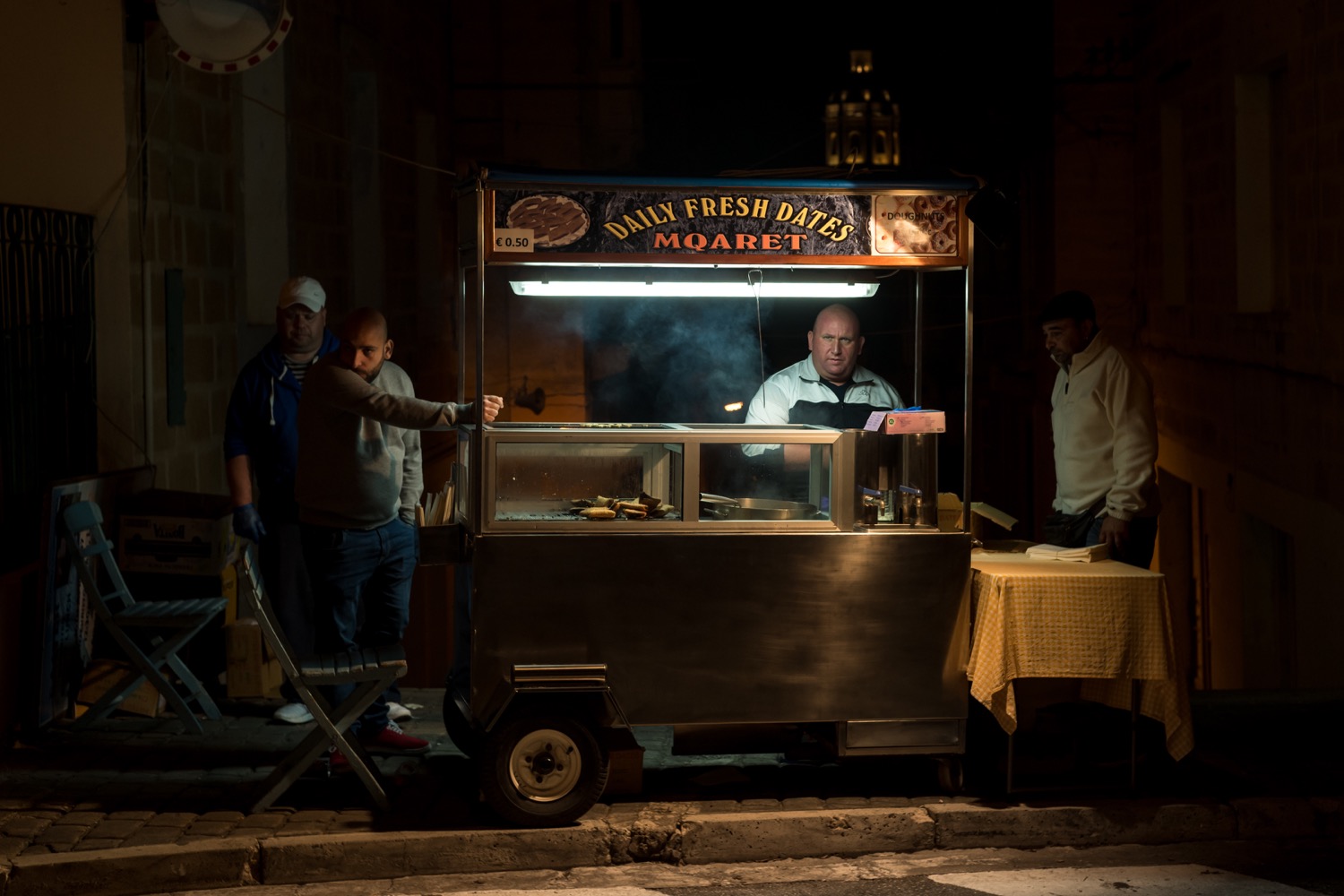 Interestingly, this was posted in more groups, yet ‘only’ got just over 500 ‘likes’.

Whilst I have found the Leica groups seem to be more active than, say, the Nikon ones, film seems to generate the most interest, at least with my photographs. And candid / street photography is most likely to offer ‘my greatest hits’.

Here’s a link to my Top Twenty 🙂