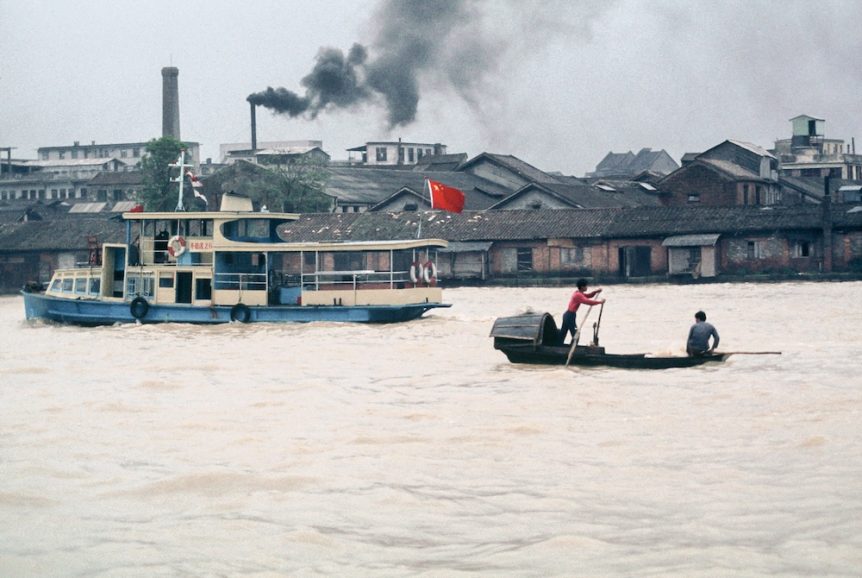 And I have known the eyes already, known them all,
The eyes that fix you in a formulated phrase,
And when I am formulated, sprawling on a pin,
And I am pinned and wriggling on the wall,
Then how should I begin?

Susan Sontag (1977: 155) accuses photography of being ‘acquisition’ and the ‘surrogate’ possession of the object. One that ‘means putting oneself into a certain relation to the world that feels like knowledge and therefore, like power’ (ibid: 4).

National Geographic, according to Andy Grundberg:

‘… present(s) our culture’s attitudes and preconceptions as if they were universal, or even nonexistent, the photography of the National Geographic produces a pictorial iconography that tends to reduce experience to a simple, common denominator‘. (1988)

Whilst we could not afford to travel much in my early and teenage years, when I started working I more than made up for this. In the space of 1975-1979, as a tourist I first visited Egypt, India, Russia, Nepal, China, Japan and more. A decade later I lived and worked in Asia Pacific for 11 years.

Always a keen photographer, I took hundreds of ‘travel snaps’. Whilst I was also a student of the societies and cultures that I travelled and later worked in, I was not really ‘aware’ of the notion of ‘gaze’. I was of course conscious of National Geographic, and for many years we subscribed. Had anyone at that time told me ‘your portrait photography is very Nat Geo’, I would have been very pleased, as it was the epitome of controlled, aesthetically pleasing and informative imagery. At the Falmouth F2F, the same line became a severe critique of some recent candid portraits that I made.

So, how do I feel about all of this? I am going to use some of my photographs from a 1979 trip to China. The country was only just opening up to the world and modernising under Deng Xiaoping’s leadership, and we had recently visited India and the Soviet Union. I distinctly recall saying at the time that ‘China would win’, as there was an energy in the air that was unmistakeable. 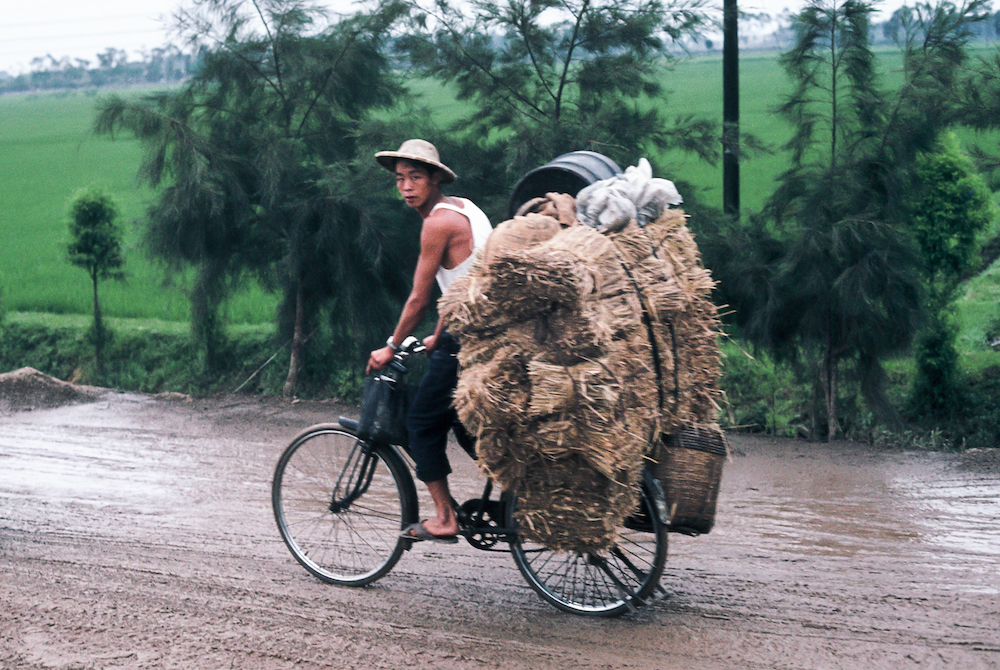 The quality of this image, and the header, is not technically to the standards that Nat Geo sets. At the time, I saw the pictures as records, indexical representations of what we saw, and perhaps as historical statements as I knew that I would be back. The meaning of photographs can change with time, of course, so as an aside it’s fun and illuminating to go back to the archives.

The header, with the pollution of China’s new ‘industrial revolution’ is unmistakable, and the flag situates the scene absolutely.

Arguably, looking at the cyclist today, it could be also seen as a cultural stereotype – the over-laden bicycle and that hat. Yet, it was also exactly what was there. It’s a street photograph, unposed and un-manipulated. And, whilst I may be wrong, I do not see a colonial gaze here – in essence, it’s a snap shot.

There is no question that, as a ‘modern Westerner’, I came with some cultural baggage, though I do believe I had a fledging awareness of the issues, not least as I had spent many years studying the philosophy and art of that part of the world. We spent as much time as possible talking to our guides, trying to understand what was happening in China.

And that’s also why we left our small, organised group to go it alone as much as we could, walking the streets of Guangzhou. 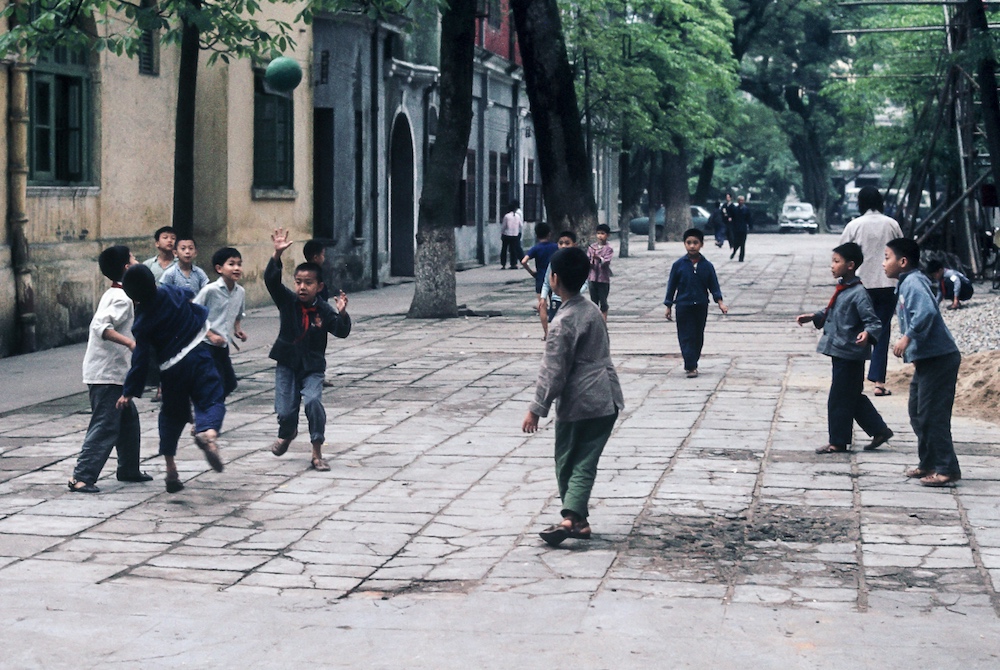 The photograph above is another street picture – but one that also captures a moment of joy which is universal – children at play.

And this, one of a few school visits we made, shows both the spareness of the classrooms and the intensity with which children studied. Perhaps at the time I was subconsciously using a reverse ‘Western gaze’. As we have travelled and worked across the world, the power of education has always been evident – as has the intensity with which parents in Asia (in general) encourage and support education to help their children prosper, something it seems we often lack today in the West, taking such things for granted. 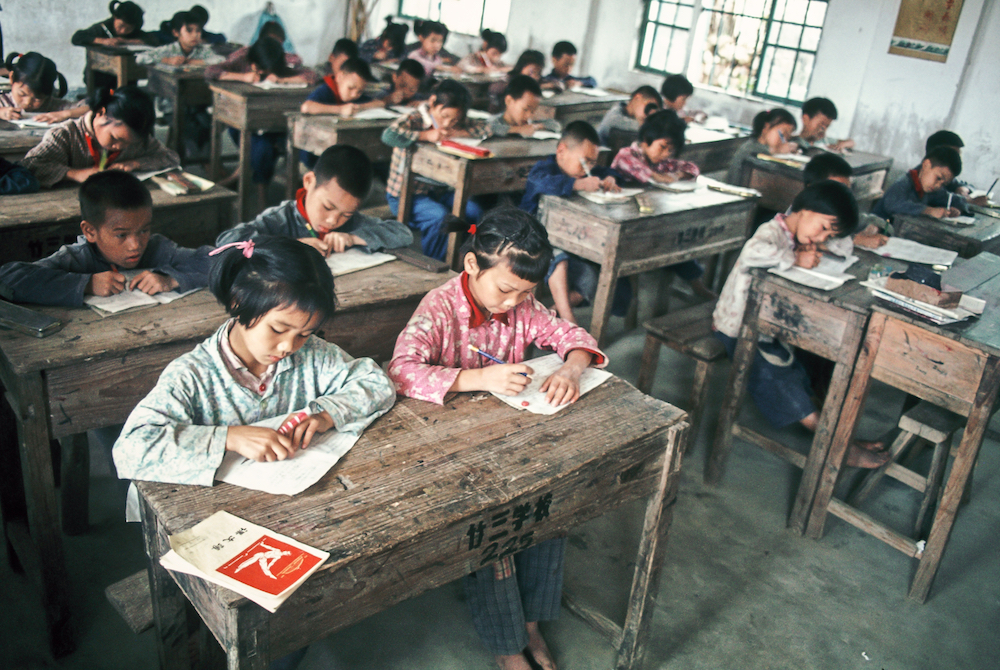 So, where does that leave me, thinking about Nat Geo? I agree with Grundberg, that the sanitised, aesthetically perfect images can give a distorted view of the world – though a picture of an elephant remains exactly that, and what is wrong with making a bird look pretty? Where it goes wrong is ‘othering’ the society the story is portraying. It is when the photographer (or the editorial brief) consciously or unconsciously portrays ‘the other’, without critical reflection, that problems arise.

Ken Domon, in Photographic Realism and the Salon Picture (1953) wrote:

‘Realism is not found in the cold, square device we call the camera. The person who shoots, his (sic) view of the world, and his method of expression are what contains Realism’. (Setting Sun, 2006: 26).

In other words, all photographs contain the photographer, and it is their approach to each situation that partly determines the end result. Equally, it is a triangle of subject-photographer-audience. Nat Geo was (and still is) very aware of its audience, and creates imagery and narratives to meet that audience’s needs. I personally see no problem if they want images of a certain aesthetic style to meet those needs. All publications have a right to choose an aesthetic approach, should they wish. It is then up to the audience to accept or reject that.

But, as others have noted in the Canvas forum, Nat Geo has mistakenly perpetuated stereotypes in the content of its stories. Whilst aesthetics and content are linked, my view is that, as Nat Geo’s mission is to educate, the content is the main debate. Over the decades, Nat Geo’s approach might be uneven, but I believe that they do educate, with their circulation on various platforms never being higher. Yes, perhaps more sensitive narratives are needed, and critique of Nat Geo is essential. I see this as a learning process. Society and our cultures evolve. Nat Geo has evolved and will continue to evolve, as will their audience.

Stepping back, as I look at my own work, whilst sometimes messing up, I never knowingly take what I call ‘disrespectful images’. This is especially true while travelling, as I am very conscious of stereotyping, and do not want to express some kind of ‘cultural supremacy’. As a documentary photographer, that is a hard thing to do.

The way forward is personal education and collaboration with people on the ground, who live in a particular culture. And each photographer must develop their own ethical code about how they take photographs, and what they photograph.
…………………….

Note: All images taken with my trusty Pentax KX, which I still use. Nothing is cropped – just restored given the damage of the years. The series is here.