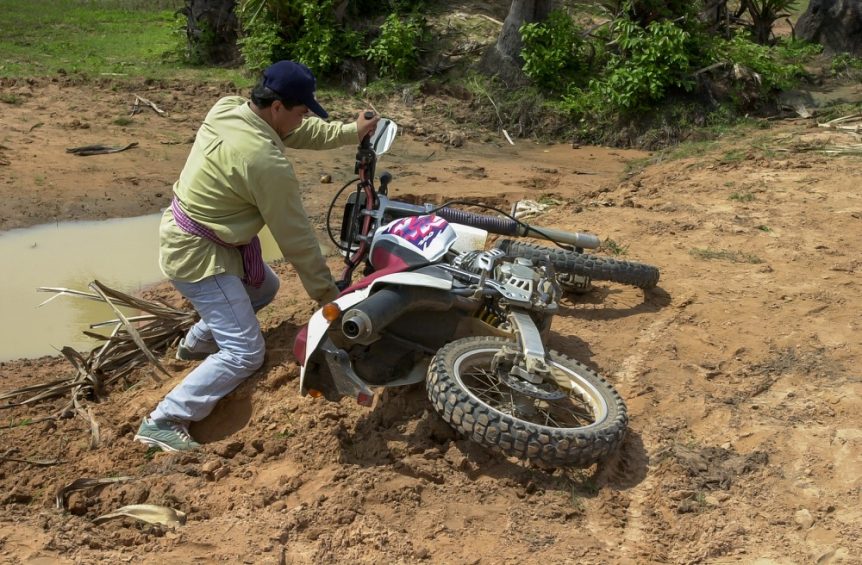 One story that will not feature in the book is one that concerns our family. It also is an exercise in rephotography, in the sense of going back to the same place, and in using photographs again.

Angkor Chum is to the west of Siem Reap, and had been under Khmer Rouge control until the Reconciliation Area process started in 1998/99. 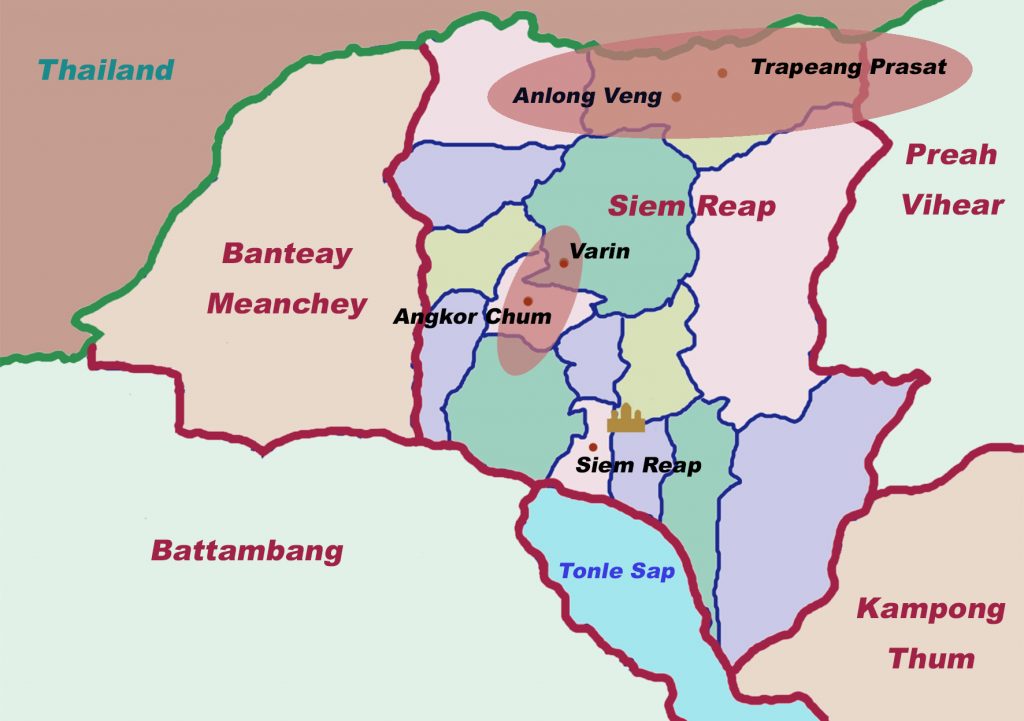 The school at Angkor Chum was one of the largest that the family built, on a  totally new site in a very inaccessible area. On our first visit we had to get there on motorcycles as the tracks were too bad even for the Land Cruisers to navigate. And this was the dry season! At times we had to dismount and walk. 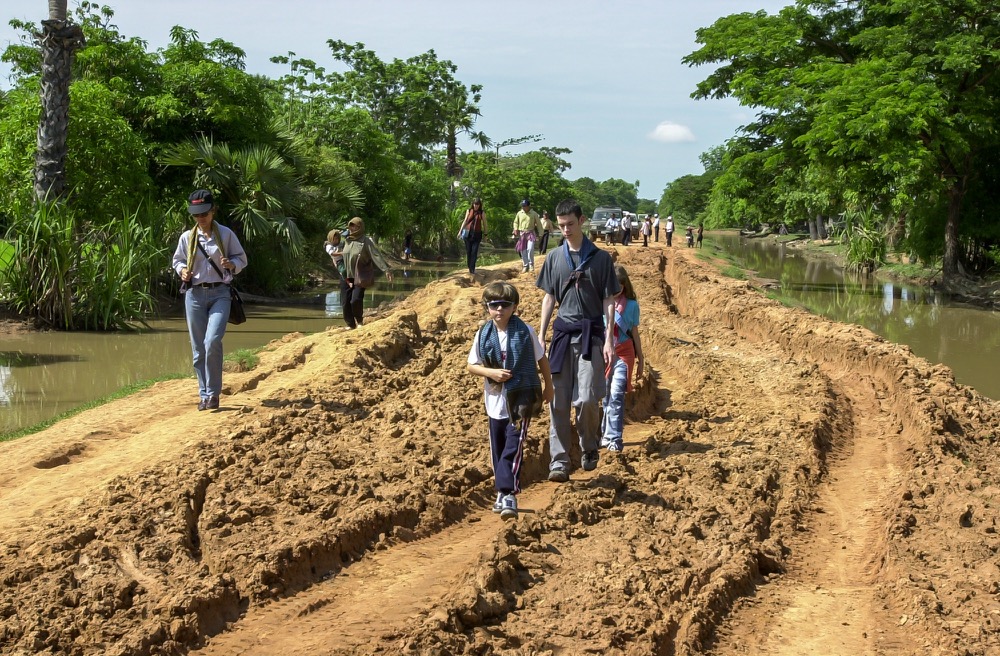 The Yates Charaka school was designed to hold 600 primary students with a library, latrines and so forth. When we first visited, in summer of 2001, the teachers got the kids to line up as we entered the school – not what we wanted but something we got used to. 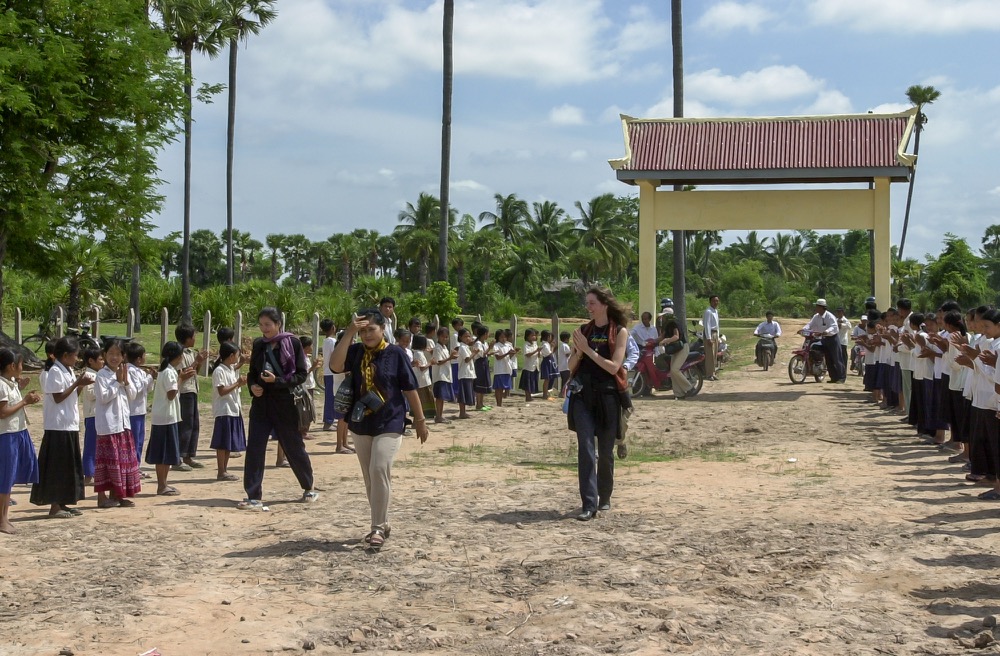 The facility was only partly finished. 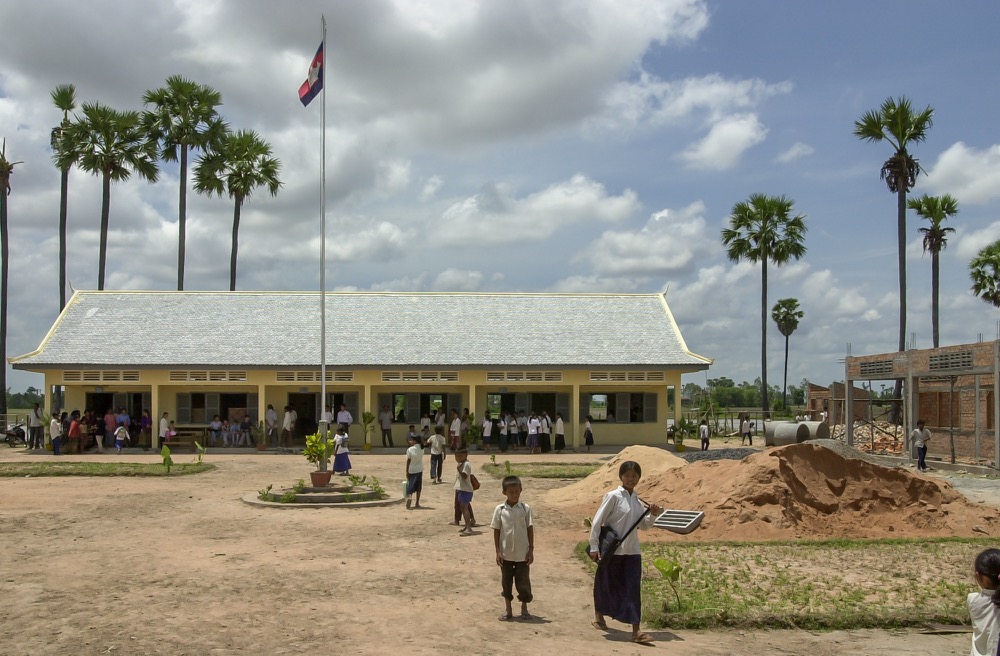 And many of the parents (and grandparents) were there, too. 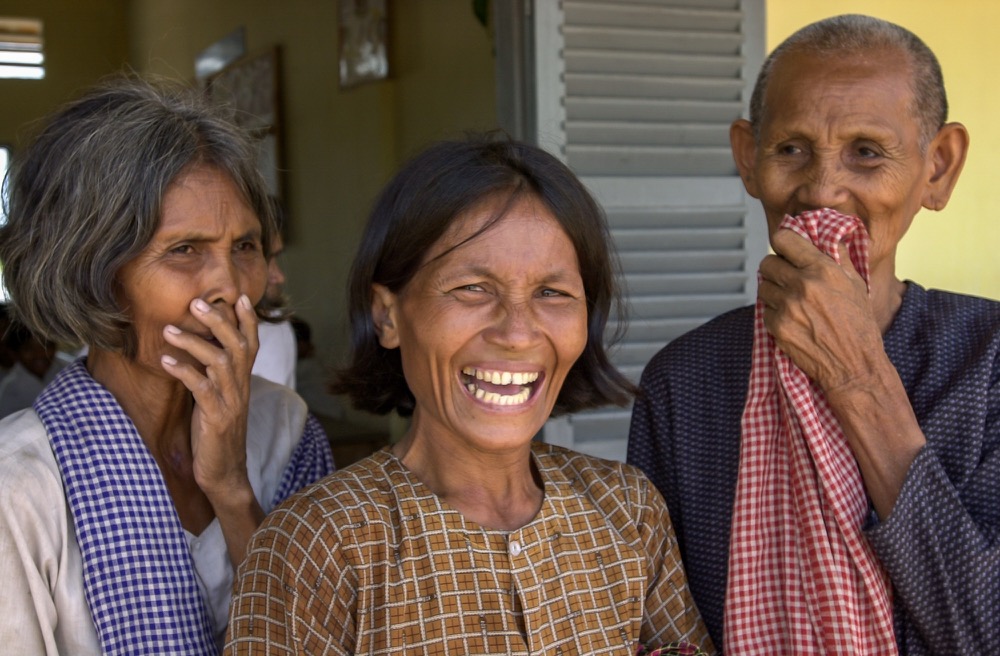 Sarath asked us to go back the next year, for the proper opening, which we did.

Well, things got even more formal. That was not totally surprising, as the Minister of Education, Im Sethy was with is, as was both the local MP and the Deputy Provincial Governor. It was one of the bigger schools built in that area in the reconciliation process, which seemed to explain the interest. 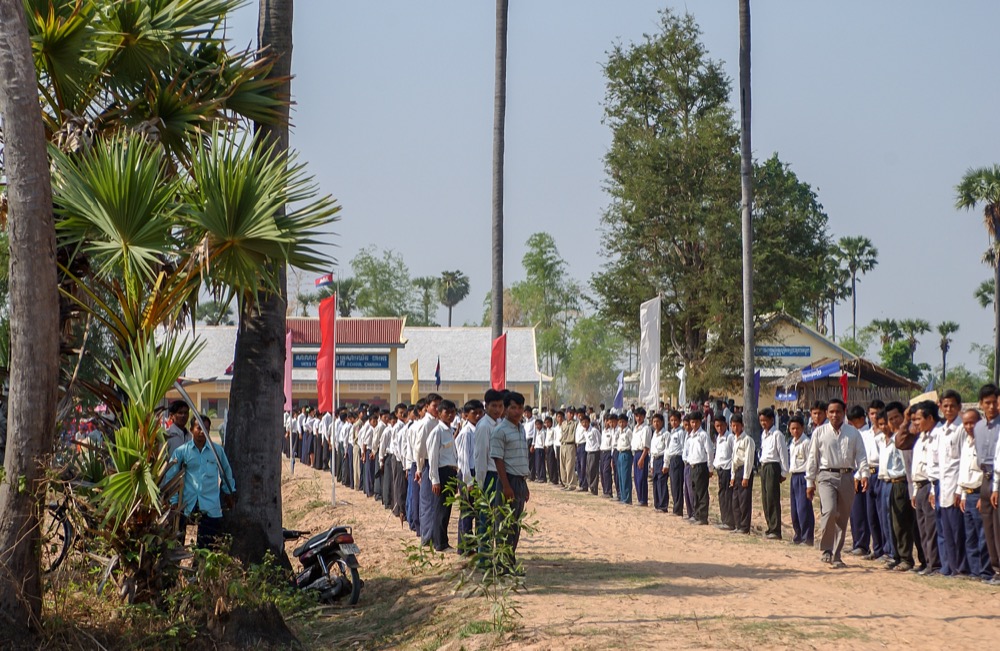 It was an extremely hot day, yet everyone was dressed up. 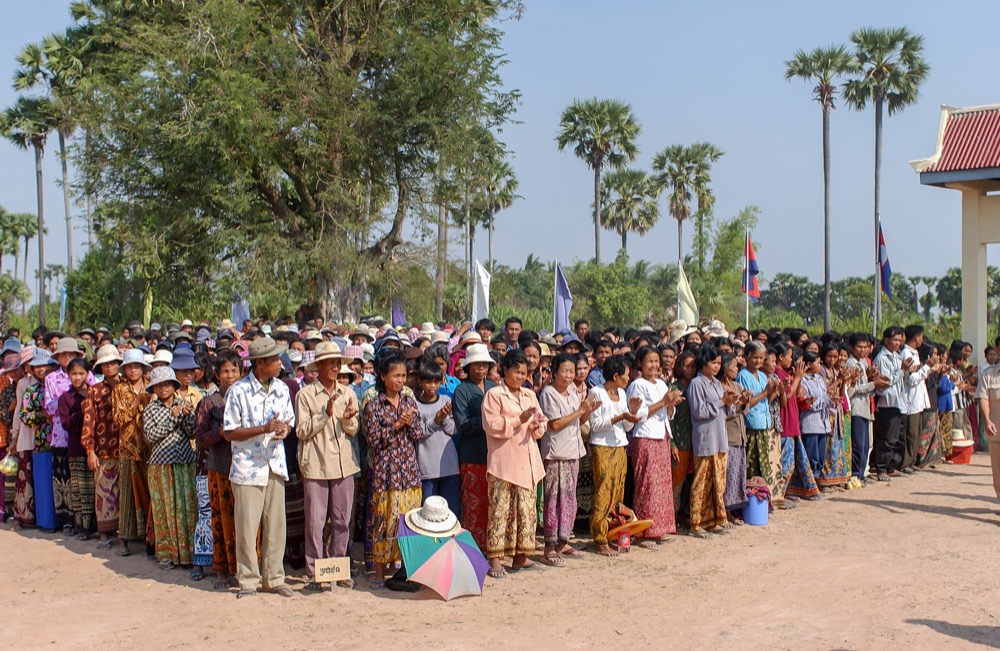 We had long realised that the grandparents were often the driving force behind the schools, as they had been educated before the war, whereas often the parents themselves had struggled during Khmer Rouge times. 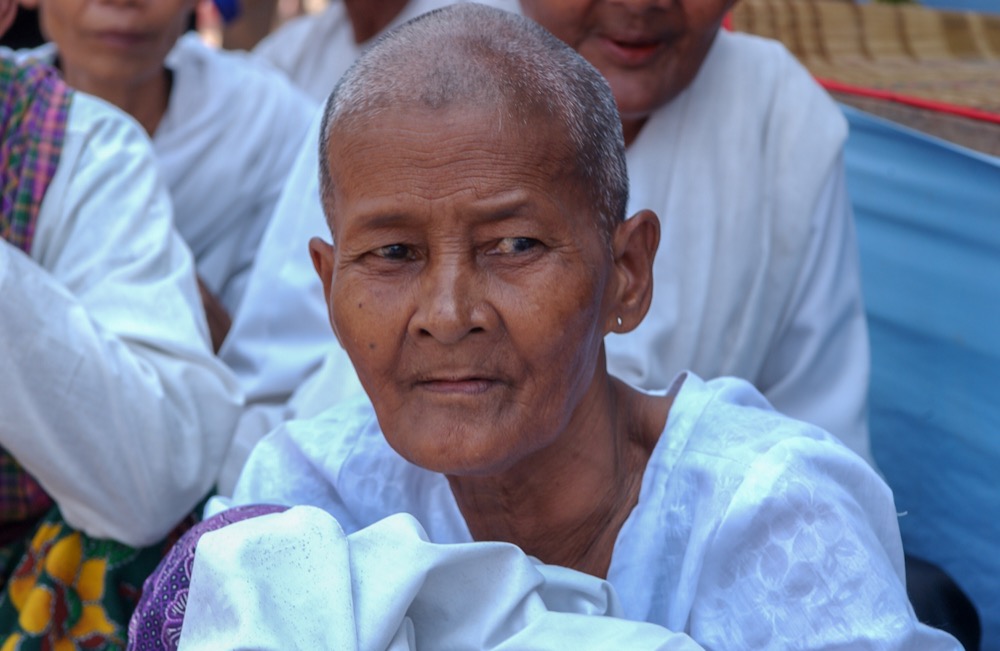 A large dais had been set up, and speeches started, after the traditional blessing. 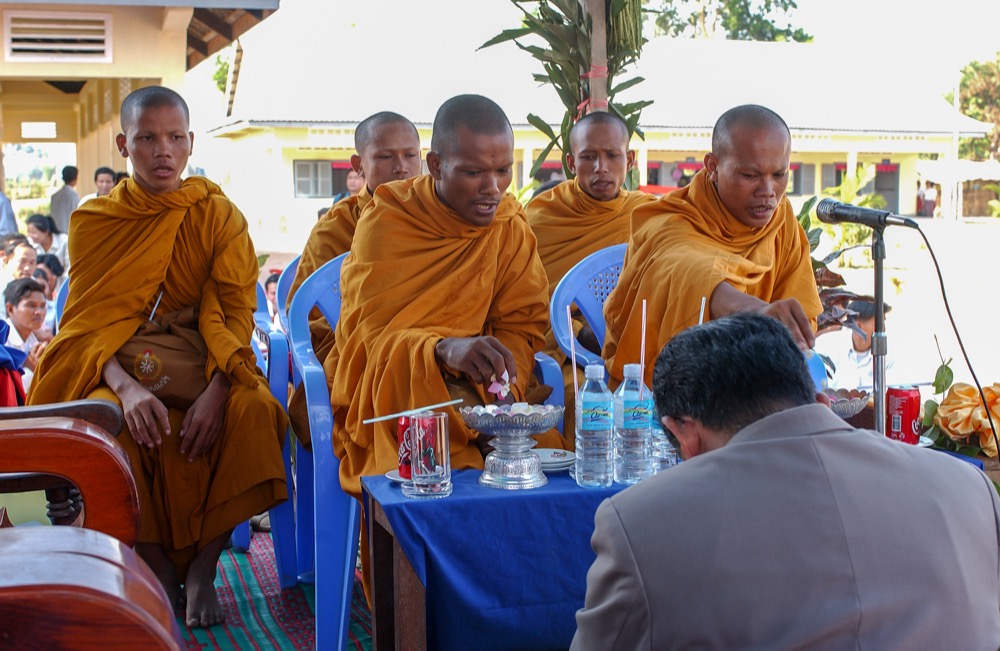 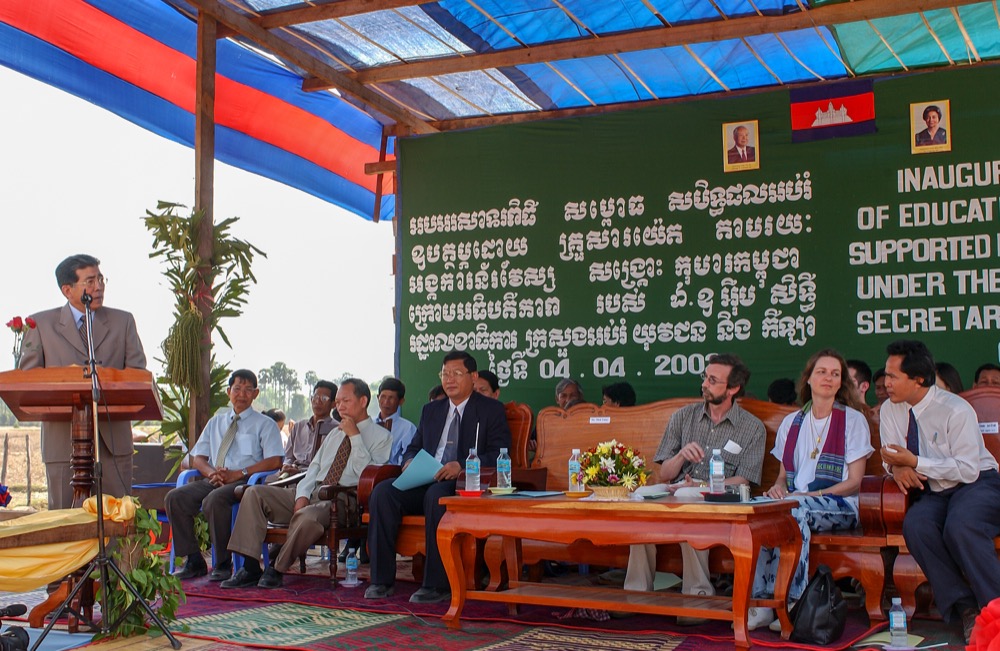 Im Sethy discussed the Government’s ‘Education for All’ program, and went on to review the progress made in the Province. Charaka was now seen as a model school for such development activities, not just for Siem Reap but in fact for all Reconciliation Areas across Cambodia.

In that, it had joined the school at Trapeang Prasat to become one of two national models.

Then, a surprise. We did not know until the very last minute that Im Sethy was to give Ingrid and I medals of National Reconstruction, from the Royal Government of Cambodia. 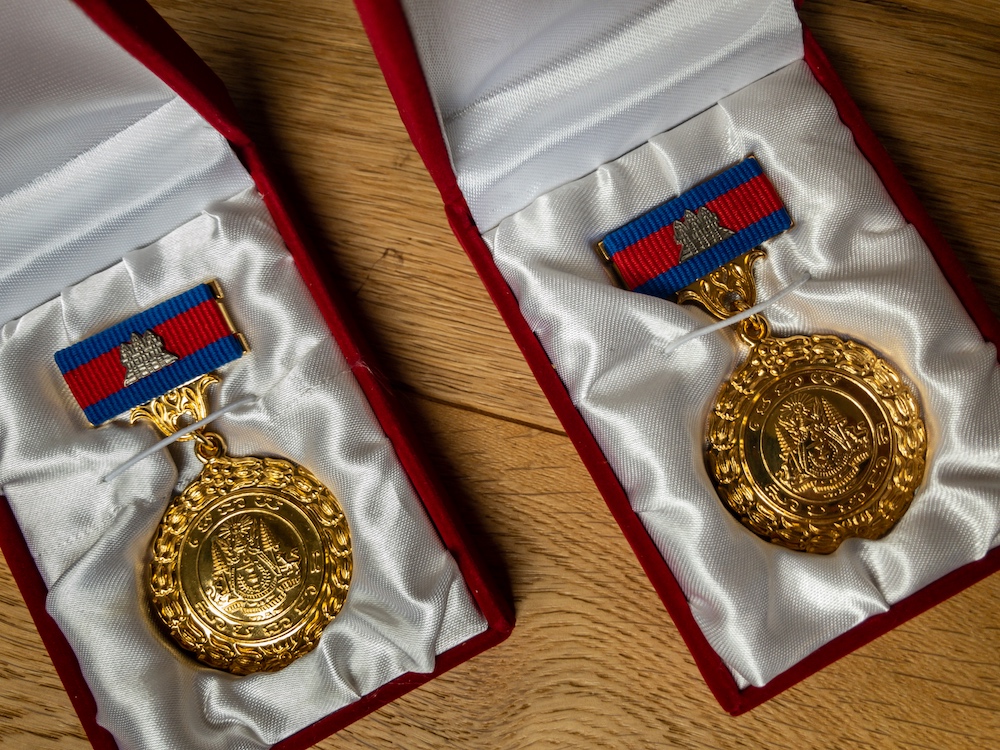 The citations were signed by Prime Minister Hun Sen. 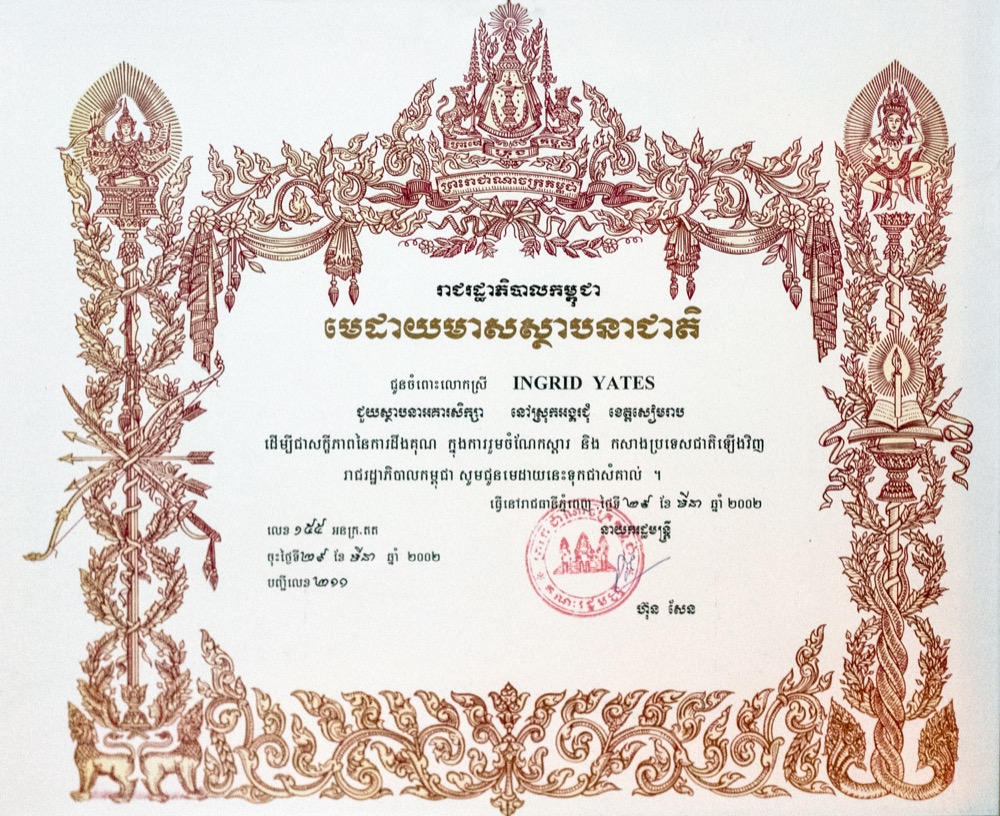 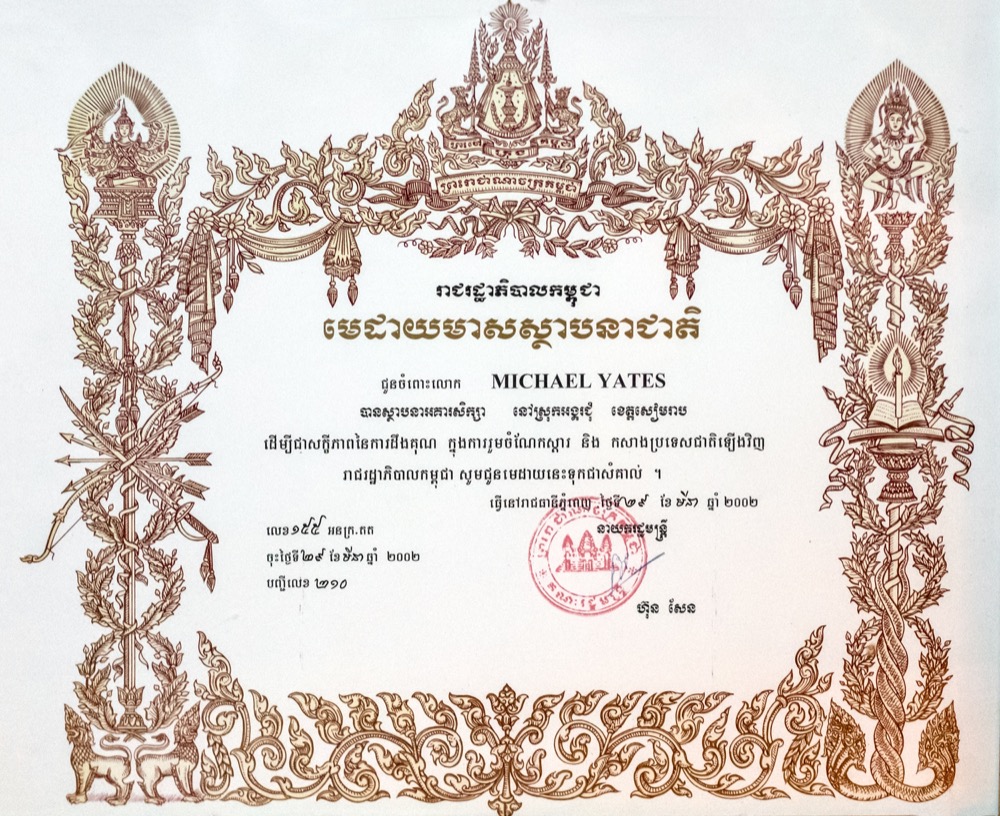 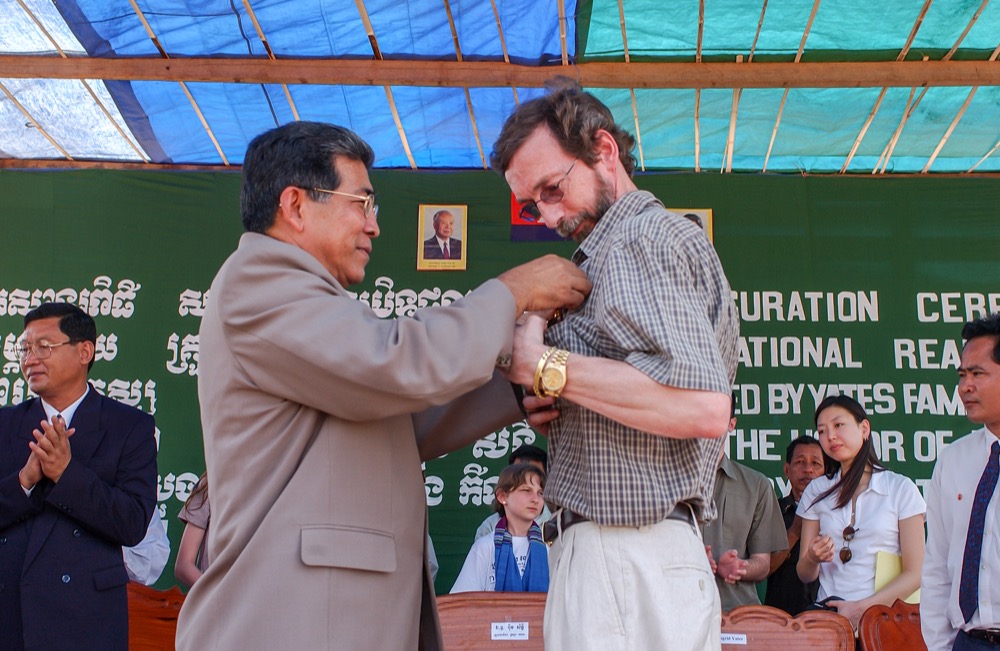 Despite the formality, it became a totally family affair. 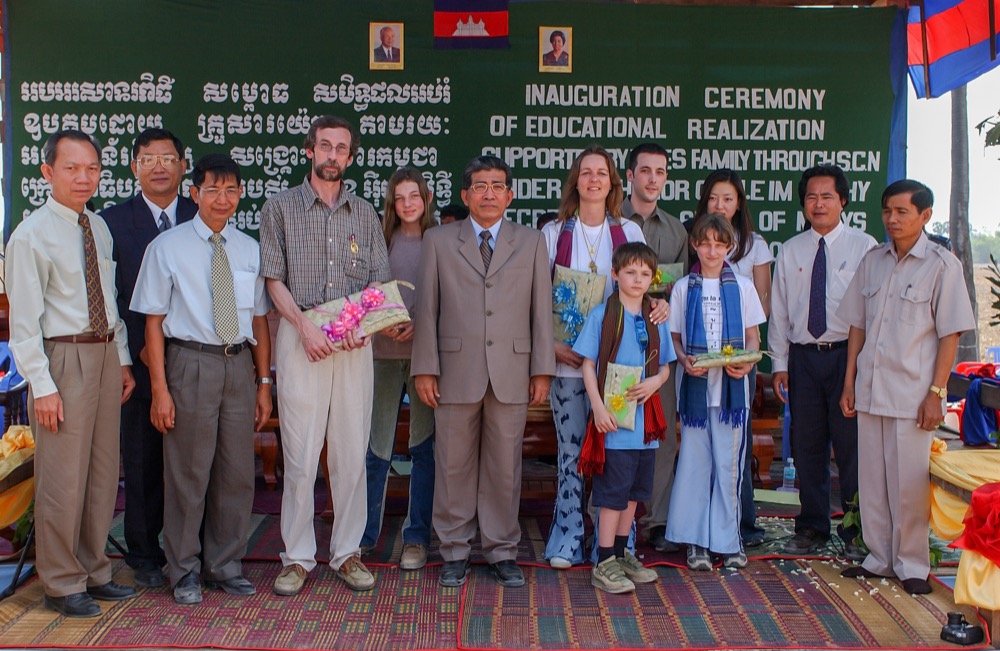 Dave and his partner Eugene, Michala, Victoria and Dan were with us. All of our children were presented with gifts of appreciation (silk krama, scarves), as Im Sethy and the PEO realized how much of a family program this is. Second, we were all invited to cut the ribbon to open the school, with Daniel, the first Yates to brandish the scissors carefully leaving several inches of ribbon for the rest of us to cut.

And everyone got to plant trees behind the school. 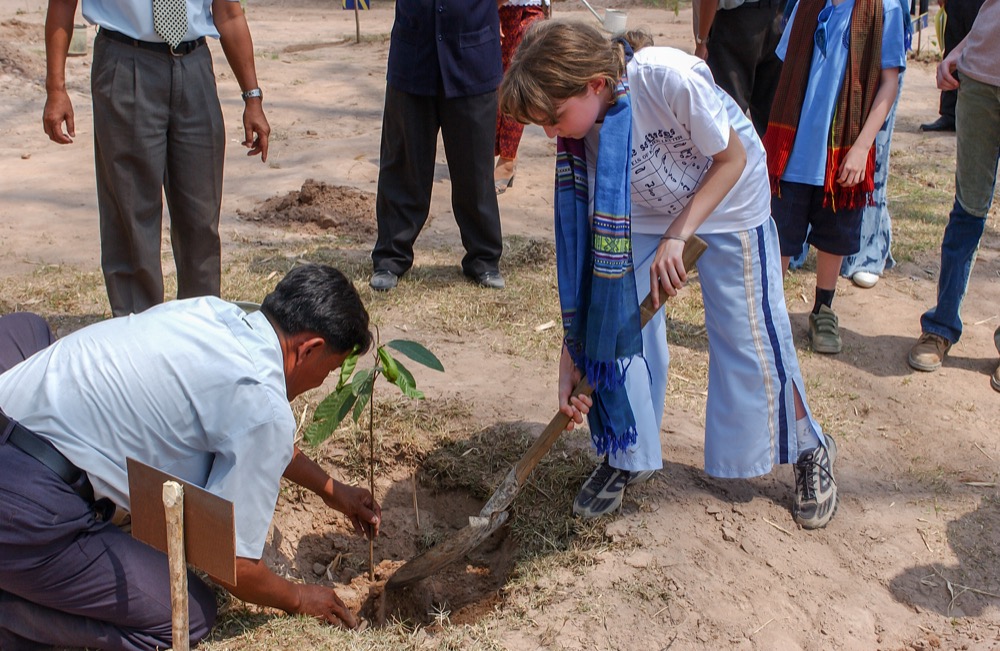 It was quite an event. And Im Sethy became a good friend, until his untimely death in 2018.

Naturally we have re-visited the school many times, meeting staff and parents that we had got to know over the years. From the beginning, we had made it a practice to send photographs to the schools and villages after our visits. Perhaps today this, and the totally collaborative approach to the project might be considered ‘socially engaged’. I’ll write more on that in the coming weeks, as I do find that phrase is overused by artists and often simply self-serving.

In 2009, the photographs of that opening ceremony were still on the wall in the school library, 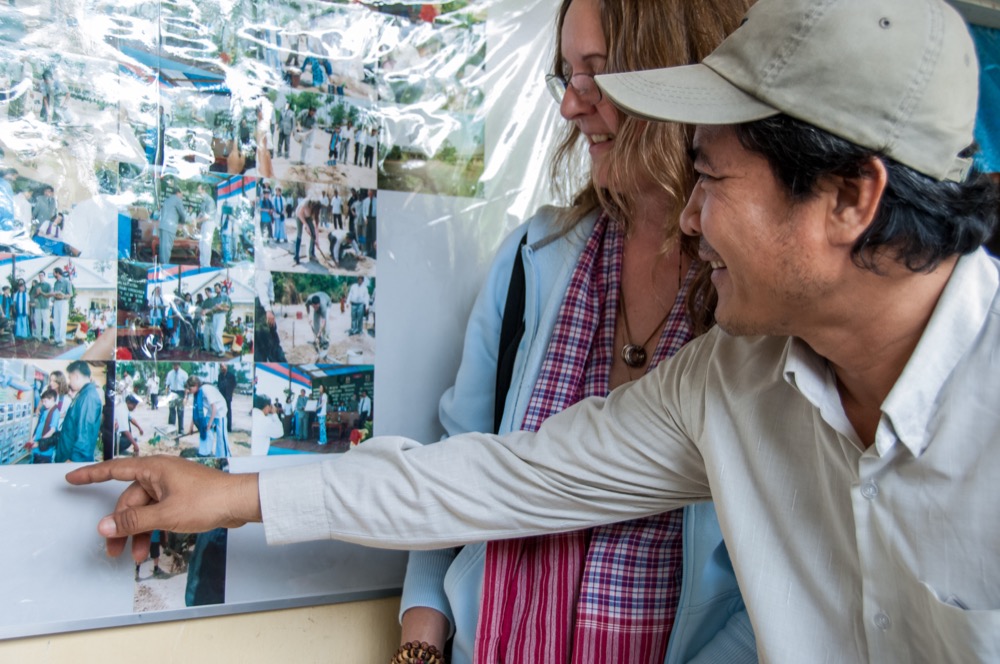 And the trees were growing nicely. On this occasion, as well as Sarath, his entire family was there: his wife Vanna, daughter Mary and son Rattanak.

Second from the left is the School Principal, Chun Sek. 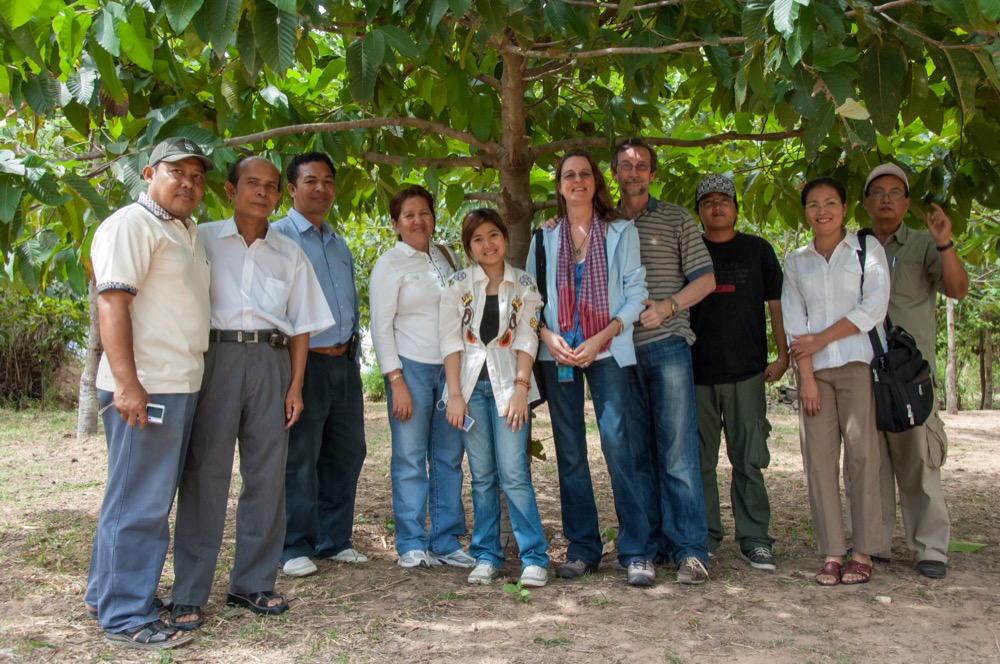 I visited the school again in 2018, as part of the MA project. It was not quite as full as it once had been – partly for a good reason, as new schools had been built to provide easier access for children nearer to where they lived.

Still, the photographs of the opening were in the school office. I do not think many of the teachers knew who we were, or even really understood what the photographs were all about.

But it was perhaps an interesting example of photographs standing in for time passed. 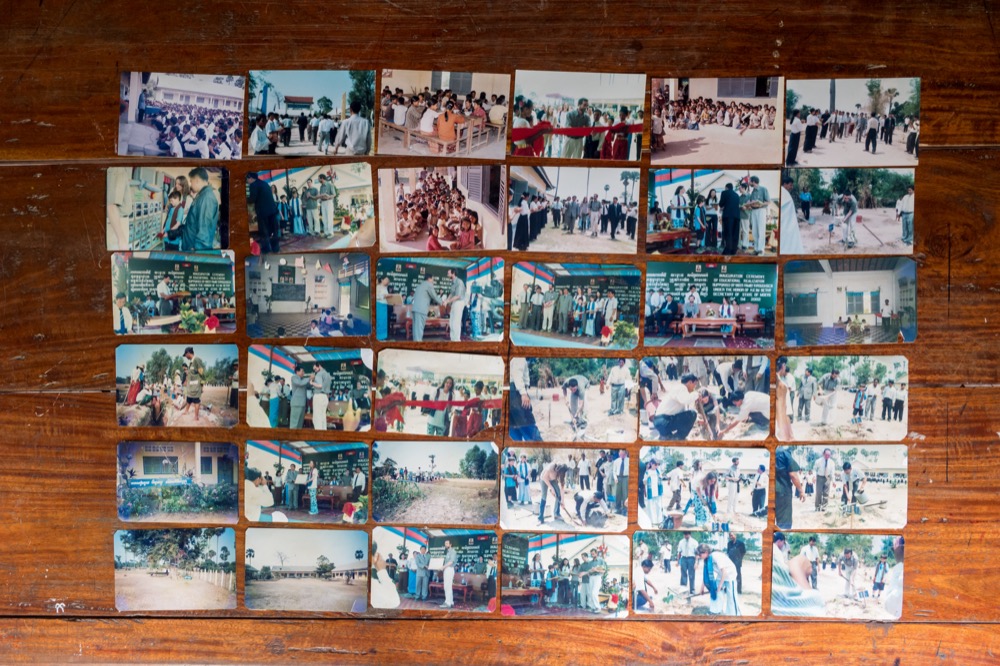 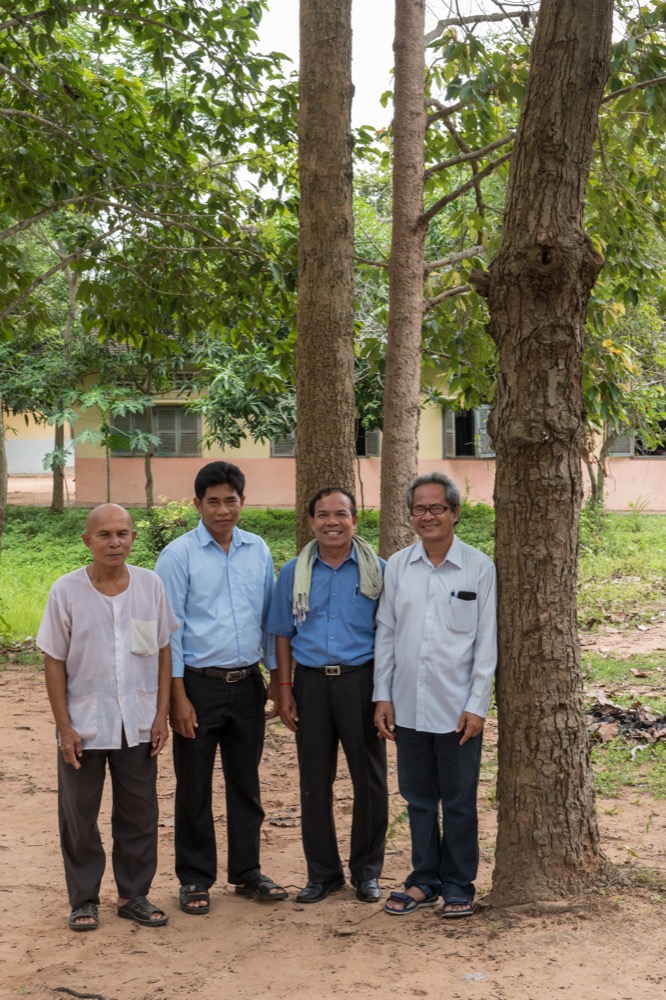