I was in Leeds this week,  giving my first lecture to the MA Media and Communications students. I had been invited by Dr. Jim Brogden, Programme Leader MA Film, Photography and Media.

The subject of the lecture was my work in Cambodia, and how I had arrived at the current FMP work. I spent quite some time discussing ethical issues of documentary photography and how that had impacted my research, covering Genocide, aftermath, and dark tourism, and connecting with my role at the Interdisciplinary Ethics Applied centre. I also discussed the use of text, starting with Brecht’s War Primer, and video.

From the beginning of my work in Cambodia (and I include the educational programs), the lack of public discourse has meant that scene setting is essential with almost every audience. Thus, in the lecture I briefly touched on Mao’s Cultural revolution as a precursor of Khmer Rouge ideology, and the impact of the US bombing.

Scholarly studies of the current Cambodian political and social context illustrate that even today the root causes of the Genocide are rarely discussed. In so many ways it remains a ‘hidden’ Genocide. Instead, the political narrative has focused on a handful of top Khmer Rouge leaders. Even Sarath, who naturally understands the entire context, usually refers to ‘Pol Pot Times’ as do most other Cambodians, defining the Genocide in personal rather than systemic terms.

Rebecca Gidley, in a recent paper, comments that even the important work of the UN-Cambodian Tribunal (the ECCC) to some extent perpetuates this narrative. She writes:

‘The ECCC international staff is also pursuing two additional cases against four suspects, but these are unlikely to go to trial. Both the government and the national judges at the ECCC have consistently opposed these cases. Prime Minister Hun Sen told UN Secretary-General Ban Ki-moon that these cases “will not be allowed.” The main reason appears to be that these cases expand the government’s definition of those individuals responsible for the Khmer Rouge regime and thereby run the risk of implicating people with links to the current government’. (2017)

The majority of the students were international, many from China. Perhaps unsurprisingly, even these students had little knowledge of the history. To make this practical, we had a group conversation about story and narrative documentary, first understanding the broad historic sweep as the storyline which then requires narrative choices.

From an FMP viewpoint, it once again confirms the need for such scene setting (albeit simply) in the upcoming show in Bath.

Jim and I will be discussing future lectures as part of the upcoming ‘Cultures in Contemporary Documentary’ module – perhaps broken into deeper dives into some of the subjects covered (including street photography as a documentary form), all related to ethical questions.

I also met and had dinner with Professor Frank Finlay, Executive Dean, School of Languages, Cultures & Societies. Frank is an old friend, and we were joined by Professor Paul Cooke, Centenary Chair of World Cinemas at the University, who I had not talked with before.

Paul’s work includes the Changing the Story program, which explores intergenerational memory within the context of peace and reconciliation in various locations across the world, including Cambodia.

The Anlong Veng project was conducted with DC-Cam (Documentary Center of Cambodia). This video does a good job of explaining the program.

The project is in its dissemination phase, best illustrated by the program of events. 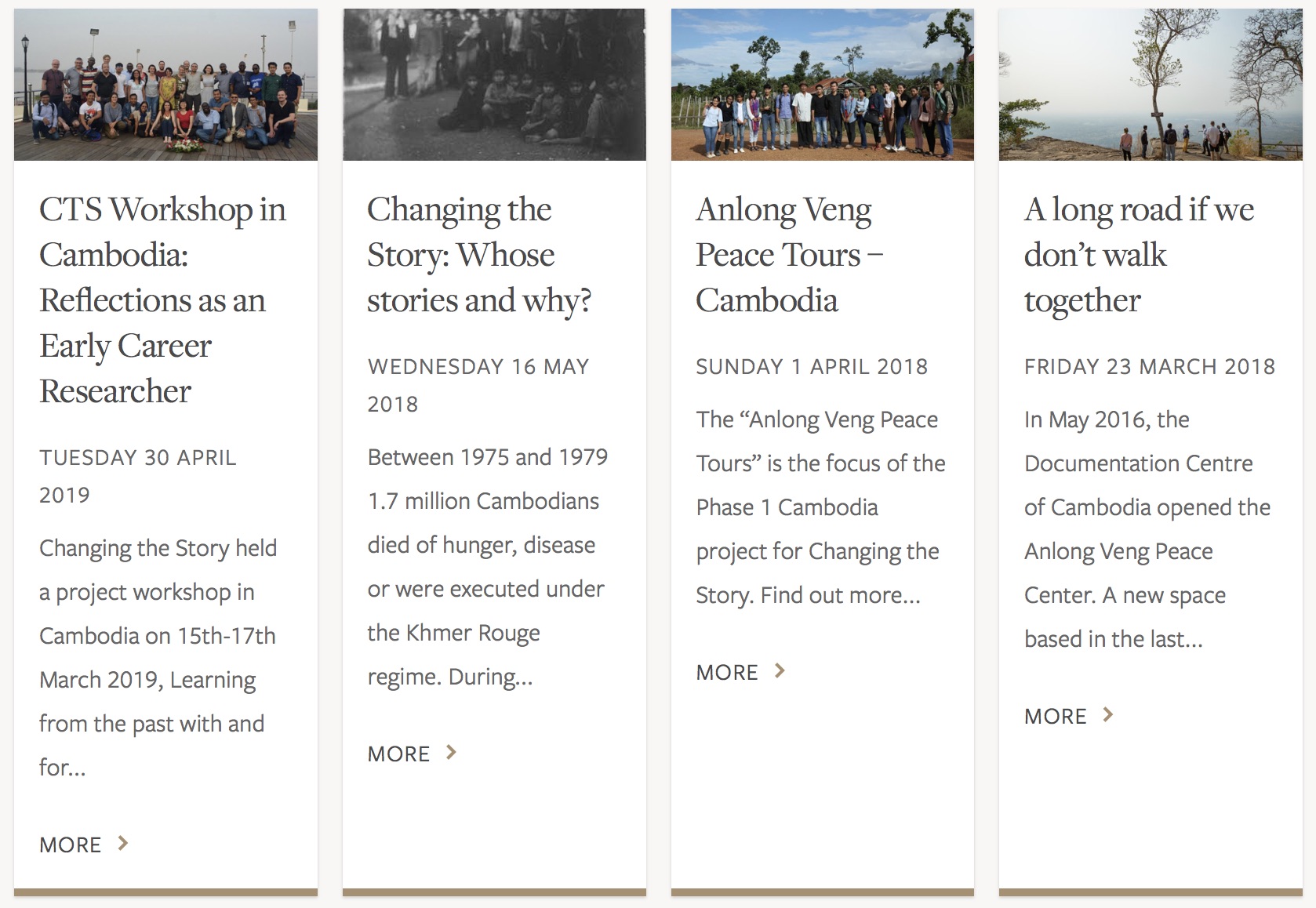 Beyond talking Cambodia politics and Genocide, we had a conversation about ‘social engagement’ in photography, and to what extent change is effected. I am not sure we reached total consensus, which only adds to my desire to dig deeper into this subject after the MA is over.

There was much common ground, and it is surprising Paul and I had not met before. We will stay in touch, both on possible new visits to Cambodia and events at the University.

We will also explore a possible exhibition of my Cambodia FMP in Leeds in 2020.

Finally, I met as usual with Professor Chris Megone, the leader of Interdisciplinary Ethics Applied (IDEA CETL). The one thing to report of relevance to this blog is that, for the third time during the visit, I had to state “no, I am not now going to do a PhD” …. but I will privately research for a book on photographic ethics 🙂

GIDLEY, Rebecca. 2017. The Political Construction of Narrative and Collective Memory in Cambodia. Situations: Cultural Studies in an Asian Context, 10.1 (2017): 99–118. Available at: https://www.academia.edu/32111852/The_Political_Construction_of_Narrative_and_Collective_Memory_in_Cambodia_by_Rebecca_Gidley (accessed 6/05/2019).