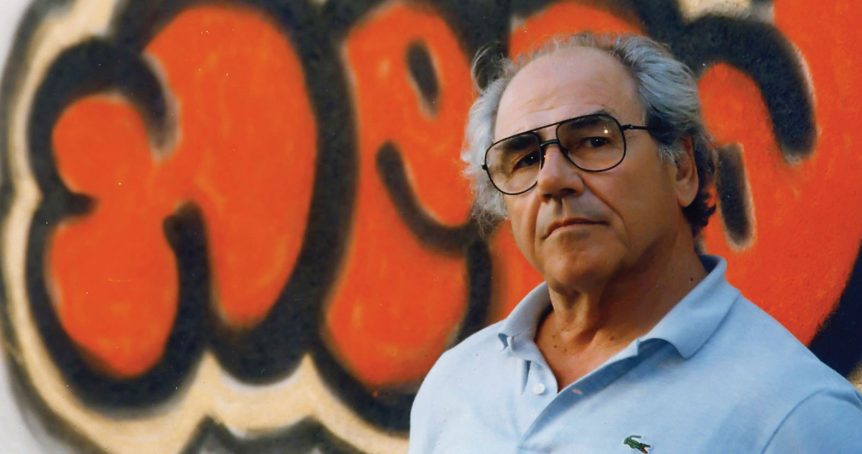 ‘Simulation is no longer that of a territory, a referential being, or a substance. It is the generation by models of a real without origin or reality: a hyperreal. The territory no longer precedes the map, nor does it survive it. It is nevertheless the map that precedes the territory – precession of simulacra – that engenders the territory‘. (Baudrillard, 1981: 1).

And he went on to write:

Modern (postmodern?) culture is not artificial – we do not live in a computer game – but we have lost the ability to decide what is real. What is natural, the real world, and what is artificial.

He goes on to show how these levels of simulation affect many fields.

Manufacturers exploit this tendency in their advertising, underpinning the capitalist system. Can any of us identify coffee plants? Yet, Starbucks populates and to some extent defines our global, urban reality. The concept of ‘Free Trade Coffee’ is better known than the actual process of coffee production.

Marx noted that some kind of false consciousness keeps us from seeing the real workings of the world – government, industry etc. We ought to be able to analyse our way to understanding such power relationships – as suggested in Baudrillard’s second level of simulation – but we don’t.

Postmodernism, with its lack of one underlining ideology, relies on articulating everything via language, and combining all kinds of ‘centres’ of thoughts, themes and executions. And language is always ideological rather than perceptual – it is constructed with simulacra.

Related, I am reminded of Hassan’s comparison of Modernism and Postmodernism (1987) .. a very useful ‘cheat sheet’ 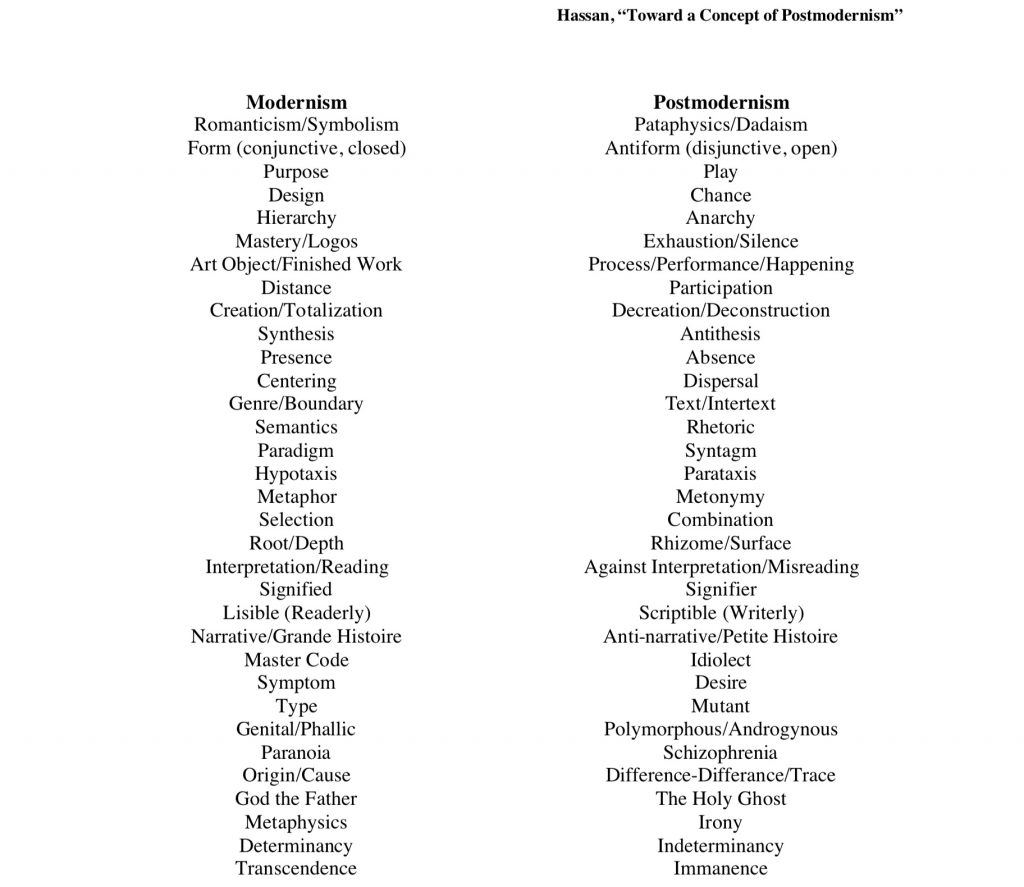 When creating photographs, are we addressing the modern, post-modern, or (as is more likely) something in between?

The more I ponder this, the more I consider that it’s becoming a blurred issue in the way that we today strategise and then execute things – maybe it always was blurred in reality? Perhaps just the ‘Theory-Nazis’ want to keep it all separate? Maybe we need new definitions?

To quote Alison Gibbons , in the Times Literary Supplement (2017):

‘Postmodernism seems essentially to involve a questioning of the real, both in terms of the actual world, and in the representational efficacy and fidelity of fiction.

Postmodernism might not be as emphatically over as some critics like to claim, but it does seem to be in retreat. Its devices have become so commonplace that they have been absorbed into mainstream, commercial and popular culture. Postmodernism has lost its value in part because it has oversaturated the market. And with the end of postmodernism’s playfulness and affectation, we are better placed to construct a literature that engages earnestly with real-world problems.’

So, postmodernism is not over – but we are trying to engage again in real-world problems (and thus, in  representation). The best of all worlds? I can see another blog post there.

Back to Baudrillard. He writes:

Such would be the successive phases of the image:

When we create photographs, an open question is what level of simulation are we aspiring to?

The examples Baudrillard uses – coverage of 9/11, the Gulf War and so far, all decry the mis-representation of events by the media. Yet it seems logically impossible to deny an event unless one ‘knows’ that it has happened – anything else is pure guesswork and fantasy.

None of Baudrillard’s simulacra examples are pure fantasy – that requires The Matrix, which overtly paid homage to his ideas.

I would concur with Baudrillard that today’s audience no longer always looks for the truth, but often lives with the media simulation of it. His call for us to wake up against being programmed is both valid and urgent. He is in effect arguing that we should be seeking ‘truth’, and in the complexity of the modern world, I would suggest that we are looking for both correspondence and coherence to find that truth.

We can see things in The Matrix movie which are real (the actors, even Baudrillard’s book). We know the actors are just that – real people, playing a role, a simulation. We follow the story, judging the coherence of the various narratives within it, as believable or not. Yet we also know that it is a movie.

We know it is just not ‘true’.

GIBBONS, Alison. 2017. Postmodernism is dead. What comes next? TLS. Available at: https://www.the-tls.co.uk/articles/public/postmodernism-dead-comes-next/. (Accessed 29/03/2019).

HASSAN, Ihab. 1987. Toward a Concept of Postmodernism. Available at http://faculty.georgetown.edu/irvinem/theory/HassanPoMo.pdf. (Accessed 29/03/2017).