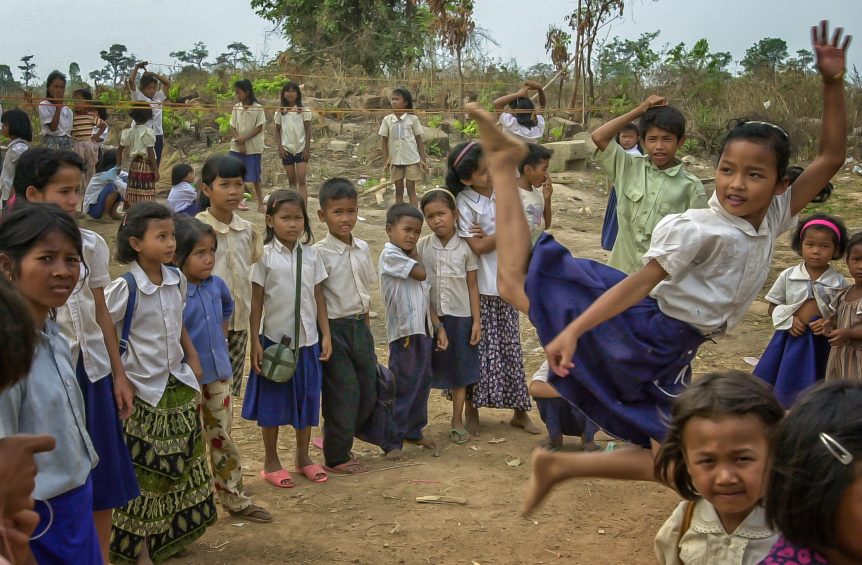 This week I am going through the archives, for rephotography purposes, as on my next trip I will be travelling up to Anlong Veng, and I want to ‘remember’ our first visit there. I plan to retrace our road trip to Anlong Veng from Siem Reap.

As noted elsewhere, we first visited the ex Khmer Rouge ‘Reconciliation Area’ around Anlong Veng in March, 2000. Ingrid, Victoria (aged 10) and myself made the trip, with Sarath, Gunnar and other Save the Children personnel. We were also accompanied by National TV and had a small, armed, Army escort. In 2000, there were landmines to both sides of most of the 120km dirt track, and now there will is a road. In 2000, the trip took over 6 hours. Now, it should take less than 2.

This post is about the images that I took, from both the technical perspective and how I edited the original series.

I used a Nikon D1, arguably the first ‘professional’ digital camera. It created 2.7 megapixel images, and I had the so-called ‘holy trinity’ of zooms to accompany it. Unfortunately I wasn’t smart enough to shoot RAW (partly because I didn’t have any software at that time to process the files). So everything is JPG, shot at a 2000 x 1312 size (the DI had effectively an APS-C sensor, not a full frame).

Straight away, I was frankly pleasantly surprised by the technical quality of the images. With the passage of time, these images now seem to me to have an almost film-like feel.

The colour balance is ‘as shot’, and the images have only been tweaked for clarity and contrast. I have also restored everything to the full frame size, rather than rather ‘random’ crops. There is an entire sequence on a deserted Khmer Rouge camp. I am looking to tell Sarath’s stories of his survival in the forest in Khmer Rouge times, and these images could be very helpful to that part of the project.

Interestingly, when I first documented the trip, I omitted to use many of these images, simplifying the edit mainly to schools and people.

It’s clear that I brought preconceptions to that edit, focused on just the school project, rather than a including a broader, historical context. I also paid attention to details, as in the butterflies, which again I omitted from the series I published.

However, my interest in what we know call ‘street photography’ was alive and well. There was no road, just a dirt track for almost 120 kilometres. And there were mines everywhere, with the Halo Trust starting clearance. Looking at this work suggests once again that it is not the camera, it is the photographer that is the key (as if I needed reminding of that fact!). But it is not just in capturing the images. It is also in subsequent edits and choices, important as I consider the ‘Landings Exhibition’, the Workshop and Publication for this module.

The full gallery is here.