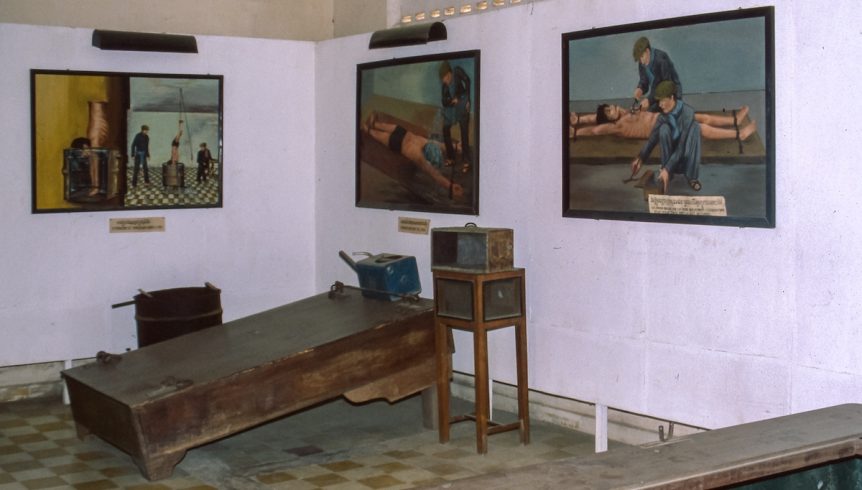 There are several layers in any ethical discussion of photographs. I am researching new ways to address these issues, with global relevance. This includes research into current best practice. There is a need is to have a framework which is accessible and useable both in situ (as the photograph is taken) and after that fact (as it is edited and used).

My start point for development is a twelve point framework that I am researching, and I will use my own Cambodian project to illustrate.

First, the photograph itself. I have always tried to present things in a factual way. Whilst a photographer always comes at a project with a point of view, I do not see ethical concerns with my mode of presentation.

Second, subject matter of Genocide and then children in primary schools is sensitive.  I have always taken photographs with respect and permission – either by the subjects themselves or with the agreement of the schools, teachers and families. During the school project, we supplied prints of images, especially as Khmer Rouge families had little photographic record. Our first involvement in Cambodia was before the guidelines such as those created by Save the Children appeared, although it seems that we anticipated that general approach. For the FMP, I am not using portraits although I have visited many schools and communities. I have adhered to the same principles.

Third, Genre. My work falls squarely into the documentary category, and I have been conscious of good  journalist practice, such as that suggested by National Professional Photographers Association (NPPA),  and the Associated Press (AP).

Fourth, cultural and religion. Cambodian society has deep Buddhist roots, albeit in sometimes hidden ways. We have constantly ‘checked in’ for local views on our work, starting with the education program and now in photography terms. My images take a respectful approach and never portrays either the culture or the subjects in an ‘othering light’. Whilst this arguably is less ‘punchy’ than a journalist might be, it has still led to a unique and, I believe, impactful result. There is some photographic work on the Genocide produced locally, including by Mak Remissa in Left Three Days, and Rithy Panh, in his movie The Missing Picture. The use of metaphor and allegory seems a central ethos. Whilst local executions have not driven my work, the use of metaphor in my FMP images seems appropriate.

Fifth, place. My work has evolved towards landscapes and other places of cultural, historical and spiritual significance. This includes graves and human remains. Like all aftermath photography, I have taken conscious decisions as to how to depict these places. In so doing I have studied the historical record, and sought local counsel. I have tried to avoid the tropes of dark tourism in the work presented, although I am aware that some of my earlier work fell into these traps.

Six, time. In my candid, street and portrait work I have long decided to avoid ‘decisive moment’ photographs which show individuals in a disrespectful light (e.g. candid ‘street’ images of the homeless in the UK, sadly a trope on social media today). Genocide and its associated emotional and psychological impact is a hugely sensitive subject across time. Time is fundamental in telling the personal stories of Sarath et al. There is a need to tell these stories accurately but also in ways that today’s audience can relate to, without falling into rephotography tropes. I will leave it to my audience to decide the level of my success.

Seven, change. There is always an ethical question as to what extent a ‘change agent’ pushes against norms. In our school development case, this was clearly the case as were were involved in programmatic change. Yet all was done collaboratively and was enthusiastically received by the Government, local authorities and families concerned. In the FMP, the intention is impactful education. Whilst this must challenge the perceptions of the audience (e.g. to what extent was the US bombing responsible for the rise of the Khmer Rouge and thus Genocide), my intent is focus on the ‘Unfinished Stories’ rather to engage in political polemics, although I will also provide material that encourages legitimate self-reflection.

Eight, power relationships. As both ‘change agents’ in education and a documentary photographer, we tread carefully in Cambodia, to be sure that we do not cause any issues for our friends and colleagues. The personal reputation of my wife and myself in Cambodia is good as we acted in principled ways, including an overt decision to work with ex Khmer Rouge. This led to us receiving medals from long-standing Prime Minister Hun Sen, who frankly has a poor international reputation in human rights. We accepted on behalf of the children and our partners. That said, in the past two years there has been a severe crackdown on journalism during the election period, and many foreign NGOs have pulled back from the Government. It is all about being sensible and practical.

Nine, network effects. We have witnessed the Khmer Rouge Reconciliation areas going from zero connectivity with the world to Facebook sharing. All of our work in Cambodia, educationally and Cambodia, has been online since 2000, and we have not once had any concern raised or misinterpretation of our work. That said, whilst the photos taken of children when younger were within the context of approval by schools and family, things are changing.  The same children have grown up to be connected online, and I am watchful on any claims these children have to curating their current digital identity. That said, the usual reaction on re-visiting the villages and schools is almost celebratory, and selfies with me seem to have become de rigueur.

Ten, individuals versus institutions. There are no institutional influences on the content of my work.

Eleven, roles. I intend to publish a book in Cambodia and will do so by working with local firms. All content and photography is being presented with the agreement of Sarath and Simeth, although the local printers do not her an editorial control.

Twelve, the law. My work raises no unusual legal issues, either in the UK or Cambodia.

One current ‘best practice’ is Paul Martin Lester’s SEA (Systematic Ethical Analysis) Framework. Whilst I have questions about his approach (see my notes on his book –  Paul Martin Lester), it is one of the more comprehensive and practical ‘ethics checklists’ out there. Lester focuses on context, roles and uses western ethical ‘syllogistic’ models, in a largely ‘post shooting’ framework of questions. But he does not deal with culture, power, change dynamics or network propagation.

Using the Cambodian project as a case study with Lester’s SEA:

Step1: What are three significant facts in the case? Genocide happened, my friends suffered, they consequently dedicated their lives to education.

Step 2: What are three facts you would like to know? At this point, merely ensuring that the facts I will be presenting in the FMP are totally accurate.

Step 3: What is the ethical dilemma? I see none, other than as described and dealt with above.

Step 4: Who are the moral agents and what is their role? My friends, Government contacts, School teachers and families involved, my wife and myself (as change agents).

Step 5: What are the stakeholders and what is their role? My friends, my wife and myself (both as change agents).

Step 6: What are all the positive and negative values of the agents and stakeholders? There has always been uncertainty over the roles of the Khmer Rouge in the reconciliation areas. Whilst there are no clear indications of genocide as such (in fact, Cheat Chum was cleared by the UN Tribunal) it was war and bad things happened. Since that time, and for twenty years, we have seen nothing but good actions in our area of concern, education. There has been no evidence of financial corruption, either, as meticulous records were kept by Save the Children.

Step 7: What are the loyalties of the agents and stakeholders? It is probably fair to say that there is significant loyalty, locally, to my wife and myself. Even today, our names are used by the Ministry of Education, for example. There is also a quite intense loyalty between the key local actors – Sarath, Simeth and Sereidy – and in fact we all share mutual personal loyalty forged over the years of working together.

Step 8: Consider against 6 ethical philosophies – Golden Rule (do as you would be done by), Hedonism (do what makes you happy), Golden Mean (Aristotle – find a middle ground), Categorial Imperative (Kant’s deontology –  an objective, rational, necessary and unconditional principle that we must always follow), Utilitarianism (maximise good), Veil of Ignorance (anonymity). I think the project passes all of these tests, though Lester misses other issues – culture, power, politics and the like.

Step 9: What creative and/or credible alternatives could resolve the issue? Other than to continue as we have been doing, I see no actions arising.