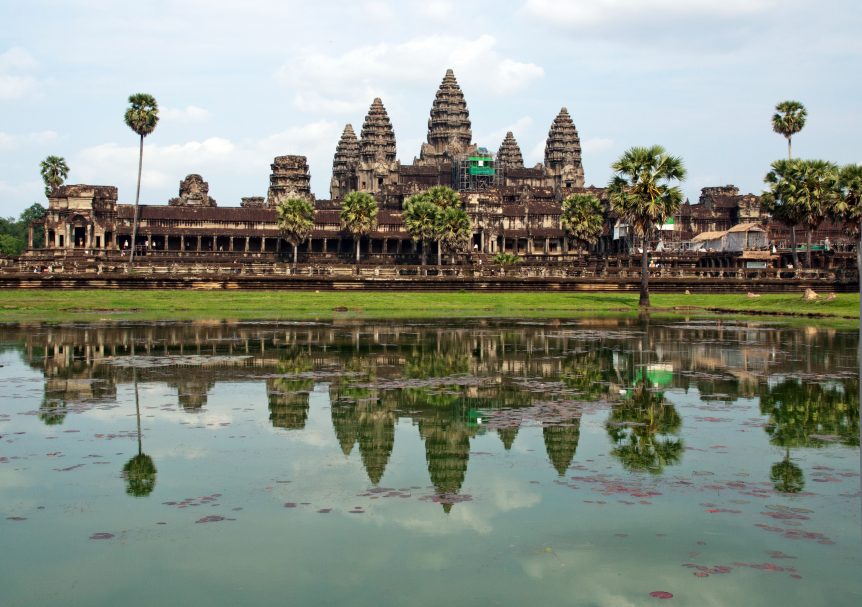 1863 – Cambodia becomes a protectorate of France.

1945 – Japan takes control of Cambodia from France, and then exits.

1953 – Cambodia wins independence, the Kingdom of Cambodia is declared.

1965 – Sihanouk breaks off relations with the US over the Vietnam War. He allows North Vietnamese guerrillas to set up supply bases in the country.

1965 – Secret bombing of Cambodia authorised by President Lyndon B. Johnson.

1967 – As part of Sihanouk’s attempt to re-normalise US relations, Jacqueline Kennedy visits Cambodia on a personal trip.

1969 – Sihanouk re-establishes diplomatic relations with US; orders attacks on Vietnamese Communists in the country.

1970 – US continue bombing in support of South Vietnamese operations in Cambodia; Nixon announces US forces enter the country to disrupt North Vietnamese and Viet Cong bases.

1970 – May 4th, Kent State Shootings during protest against US in Cambodia. Four students killed by National Guard. Nationwide protests in US.

1970 – Congress stops combat forces and advisors in Laos and Cambodia.

1971 – By year end, about 30% of the Cambodian population has been displaced.

1973 – Paris Peace Agreement for Vietnam cease-fire; does not include Cambodia.

1973 – US resumes bombing in Cambodia; ended by Congress in August.

1973 – Sihanouk says he will negotiate with the US but various attempts from all sides fail.

1975 – US airlift of supplies into besieged Phnom Penh.

1976 – Khieu Samphan is Head of State; the country is re-named Democratic Kampuchea.

1977 – Fighting breaks out with Vietnam.

1977 – Pol Pot emerges as ‘Brother Number One’ and aligns openly with China.

1981 – The pro-Vietnam Kampuchean People’s Revolutionary Party wins general elections. The international community does not recognise the new government.  The government-in-exile, including the Khmer Rouge and Sihanouk, retains UN seat.

1989 – Vietnamese troops withdraw. The State of Cambodia is declared. Buddhism re-established as the state religion.

1994 – Many Khmer Rouge surrender in a government amnesty.

1997 – Pol Pot is put on trial by the Khmer Rouge, led by Ta Mok (Brother Number Five, aka ‘the butcher’), and sentenced to life imprisonment.

1998 – Ranariddh is tried in absentia and found guilty of arms smuggling but is pardoned by the King.

2004 – King Sihanouk abdicates and is succeeded by his son Norodom Sihamoni.

2005 – Rainsy is convicted in absentia of defaming Hun Sen.

2007 – Ranariddh is sentenced in absentia for selling Funcinpec party’s headquarters, despite denials.

2009 – Parliament again strips Sam Rainsy of immunity. He is charged but fails to appear in court.

2010 – Duch is found guilty of crimes against humanity and given 35-year sentence.

2012 – Duch loses appeal against conviction and has sentence increased to life.

2012 – Cambodia and Thailand withdraw their troops from Preah Vihear area.

2017 – Sam Rainsy resigns as head of CNRP. Parliament amends a law to bar anyone convicted of an offence from running for office.

2018 – Lèse-majesté law passed, making it a criminal offence to defame the king.