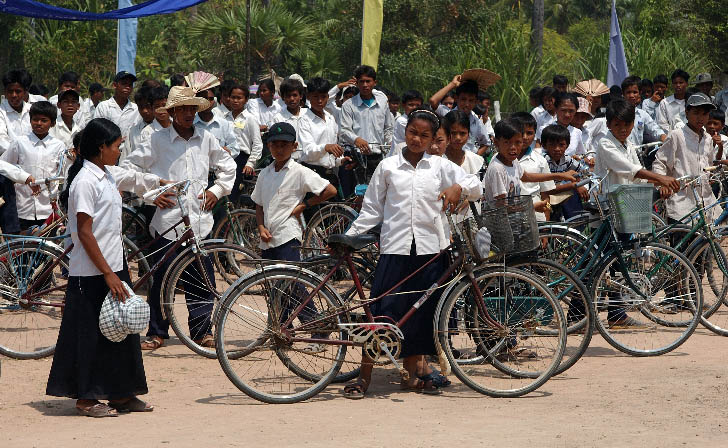 Today was going to be rather different, as there was to be a formal opening of the Charaka School at Angkor Chum. We had visited there last summer, just after it was completed. As we then noted, the local people had insisted on calling it the ‘Yates Family School’, despite our protestations, and also that we needed to return. But we did not yet realise the significance of either fact.

The trip started with a short drive to the Siem Reap Provincial Education Office (PEO), where we met Im Sethy (Minister of Education) and his team. Whilst we did not realise it at the time, we had caused a bit of consternation; we were all very casually dressed, and we had not expected that the day’s events were going to be quite formal. Most of the other people we met were dressed in formal shirt and ties – and suits in some cases.

In any event, there was a fleet of 7 white Land Cruisers lined up, complete with an armed escort, and we set off. We stopped for a breakfast of coffee and bread at Puok, on the main M6 highway which connects Phnom Penh in the South with Sisophon in the West. Last year we had to go by motorbike to Angkor Chum, but this year it was relatively easy by car. Easy, that is, except for the thick dust thrown up by our convoy. And easy, because for many kilometres we left the road proper, and travelled on a well worn track across dry paddy fields.

It was a relatively short trip of about two hours in total, and everyone enjoyed the conversation in the cars, and the beautiful blue skies. As we approached Charaka, it was clear we had totally misunderstood the significance of the ‘grand opening’. All 600+ schoolchildren were lining up at the entrance, and they were joined by (probably) 350 parents and 100 grandparents – not to mention the staff, the PEO, the local MP, Deputy Provincial Governor, Commune leaders and all. The temperature was in the high thirties, and our krama (scarves) were an essential item, not a fashion accessory.

The ceremony started with a sombre Buddhist blessing received by Im Sethy on behalf of everyone present. And then the speeches started. Tor Kimsean (the PEO Director) led off, reporting on the  dramatic progress of education in the District, and in the Province as a whole. This was followed by Sarath, who light heartedly embarrassed us by explaining the details of our involvement, including the financial aspects.

Next, Mick had to speak. It was really a touching moment. Many hundreds of people had been waiting in the hot sun, some under umbrellas – so what does one say? The Yates kids were pretty much fed up with Mick’s normal line of bad-joke speech making, so it was time to be a little different, and in fact rather serious. It was striking, once more, how much the parents and grandparents were involved in the school. It was, in fact, far more than a school. It was a centre for the community. That therefore became Mick’s theme.

It was now Im Sethy’s turn. He discussed the Government’s ‘Education for All’ program, and went on to review the progress made in the Province. Charoka was now seen as a model school for such development activities, not just for Siem Reap but in fact for all Reconciliation Areas across Cambodia. In that, it had joined the school at Trapeang Prasat to become one of two national models.

Then came the most surprising part of the ceremony. We had not been warned. Mick and Ingrid were awarded Medals of National Construction by the Government. Truthfully, we had very mixed feelings about this. On the one hand, like any such award, there is a moment of pride. On the other hand, the hard work had really been done by so many other people, and we were just symbols. Hopefully it was in that latter spirit that we accepted the medals. 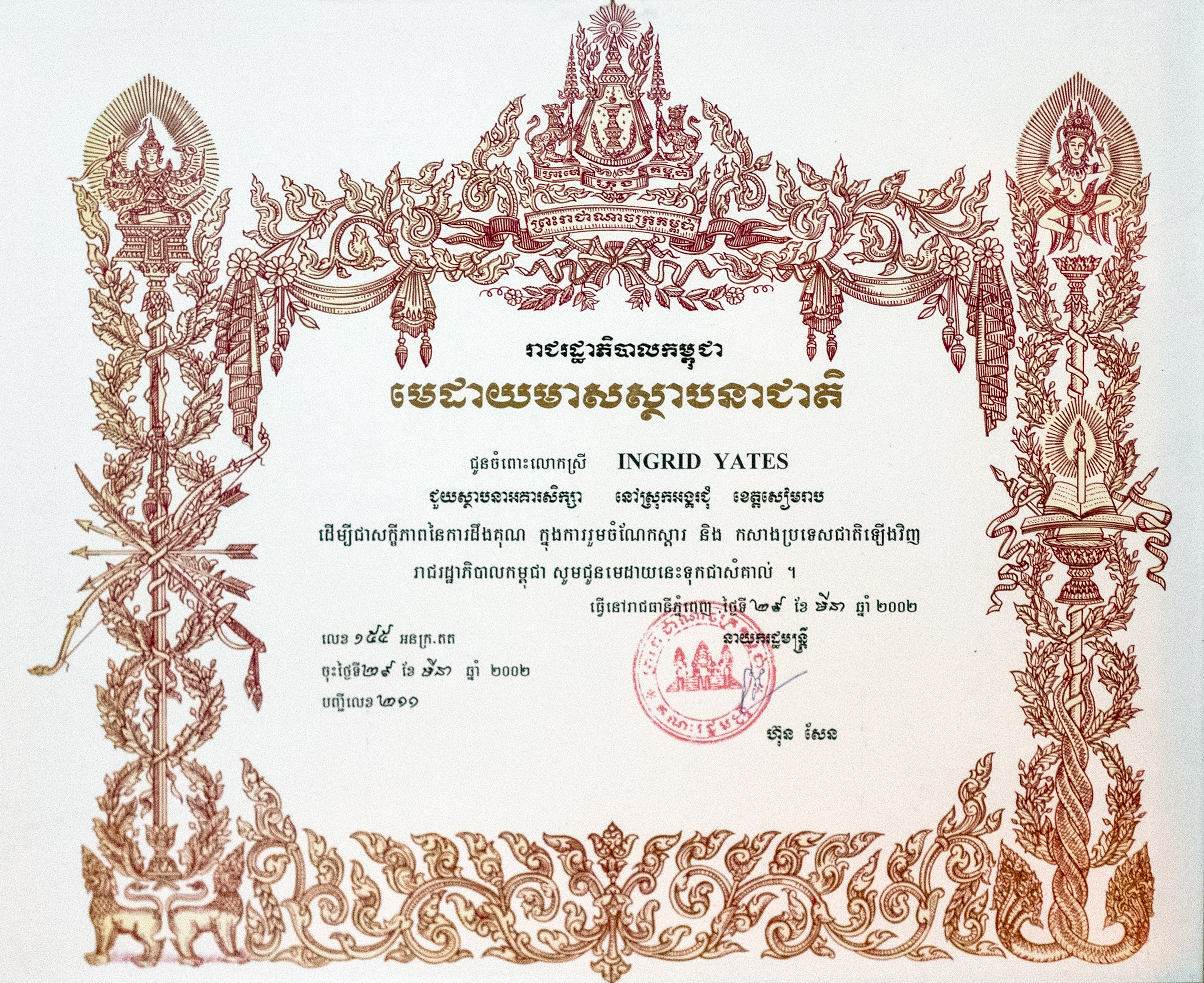 The most wonderful part of the entire ceremony, though, was yet to come. First, all of our children were presented with gifts of appreciation (silk krama, scarves), as Im Sethy and the PEO realized how much a family program this is. Second, we were all invited to cut the ribbon to open the school, with Daniel, the first Yates to brandish the scissors carefully leaving several inches of ribbon for the rest of us to cut!

And, finally, after a tour of the school library and resource facilities, and the obligatory TV interviews, we were all invited to plant trees in what was to become the garden of the school. It was a very happy occasion for everyone involved, and a lot of fun as water spilled from oversized watering cans.

In any event, proceedings had to draw to a close. We said our goodbyes to the children at the school, and to the staff, and then went into Angkor Chum for lunch. Baked fish, rich, soup and fresh fruit – all accompanied by the obligatory Tiger Beers – made for a much appreciated break.

Im Sethy now had to go in a different direction, to carry out yet more official duties, and talk with local education officials. So we in turn said our goodbyes, and headed north with the Save the Children team.

We visited the new Beng mini-school, which now had over 150 children attending, and was still growing. The building was a long way from the grass-roofed structure which stood in its place on our last visit. It was terrific to see the smiles on the kids faces – although it was clear that this area is still one of the poorer ones – and we chatted with several of the parents that we had met last summer, to try to better understand their situation and their future needs.

We also visited the Roumdoul mini-school, but at that point it was getting late, and we turned around to the south, to head back to Siem Reap. It was a pity, as we had hoped to keep going north to Varin. That will have to wait for the next trip.

I am always at a loss to sum up each trip, and this one was perhaps even tougher to do. So I will simply say that it was a great few days for the whole family, in one of our favourite places in the world. And we are both pleased and humbled to be involved in this project.