The trip started early as usual, meeting our Save the Children and Siem Reap Education Office friends outside the hotel.

But today was a bit different, in that we would be taking motorcycles. Although the destination was much closer to Siem Reap than Anlong Veng, the roads are much worse. In fact the first time that he had visited Angkor Chum, in the rainy season, Sarath had traveled waist deep in water.

Last November we had agreed to start new programs around Angkor Chum, and this was the first chance we’d had to visit. We started in the Land Cruisers to the outskirts of Siem Reap near Puok. Turning due North, we managed to get about 5 kilometres before the roads basically disintegrated – and this was the dry season. At that point we all needed to mount up. Sarath had managed to get hold of a serious dirt bike, and thought that Mick should be his passenger (victim?). Everyone else was on a moped of some description, including the local police chief who had decided that we needed an armed escort to Angkor Chum, a further 15 kilometres or so. The farms along the road looked relatively prosperous, with fields in good condition, even if the people looked poor.

This entire area was one of the last active battlefields with the Khmer Rouge, even after the fighting stopped around Along Veng. Still, the mines have mostly gone, and whilst most of the people are still ex-Khmer Rouge, there are quite a few ‘immigrants’, and the area is peaceful and calm. The road was long and straight, with small canals on either side, but the houses were very spread out which makes it very difficult to efficiently organize schooling – hence the need for both “core schools” and “cluster / mini” schools” – more on that below.

It turned out to be a lot of fun, even though we often dismounted to get across the muddy ruts in the road. Still, it only took just over an hour of riding to travel to the core school on the outskirts of Angkor Chum. Our first view of it was from across the fields – a brand new facility built in just the last few months. We were totally unprepared for what happened next. Sarath, in what we all called his Martian helmet, fell of his bike, which amused us all but damaged his dignity at least a little bit, something tough to achieve.

As we walked into school, two hundred children lined the walkway, and waved and clapped. As if that was not enough, the same number of parents and grandparents were waiting for us by the new school buildings, and all the local dignitaries. It was gratifying yet embarrassing, especially for our children who are (rightly) not used to be treated as VIP’s.

After a welcome refreshment of fresh coconut milk, it was time to hear the parents, the local government, and the chairman of the community association – a monk – on the school’s progress. Mick once more annoyed the family by using his standard speech for this trip. It seemed no one wanted to hear that “it was nice to see the smiles on the children’s faces, but it was even nicer to see the smiles on the adults faces”. That is, no one except our Cambodian friends who could not agree more.

To be serious on the point, it has been very instructive to see how a primary school can be a clear focus of development for the entire community. Too often in the so-called developed countries, we take education so much for granted that it hardly figures on anyone’s radar screen. Here it is different: education is believed by everyone to be the key to an entire community’s future.

For the record, the participants in the meeting were:

The local people had insisted on calling this the ‘Yates Family School’, and despite the great welcome, also insisted that we come back for the official opening in 2002. So, that will be our plan – probably in April. The school has three building: two 5 room classroom blocks, and an administration / library block. Even so, it is being outgrown already. Just as in the other schools, once it is in operation, more and more children make the effort to walk to classes. Word of mouth, ambition to learn and perhaps a modicum of parental pressure are wonderful motivators.

With some emotion, our group had to leave, to make our next appointment with the Angkor Chum District Government. They had kindly offered us lunch. Some of the village girls had put on their best dresses and jewellery to wait at the table at the District Office. We felt genuinely honoured and more than a little embarrassed. Conversation at the table was a bit thin, as our Cambodian is almost non-existent, and English is not a local skill. Nevertheless, we left the best of friends, with promises to return. 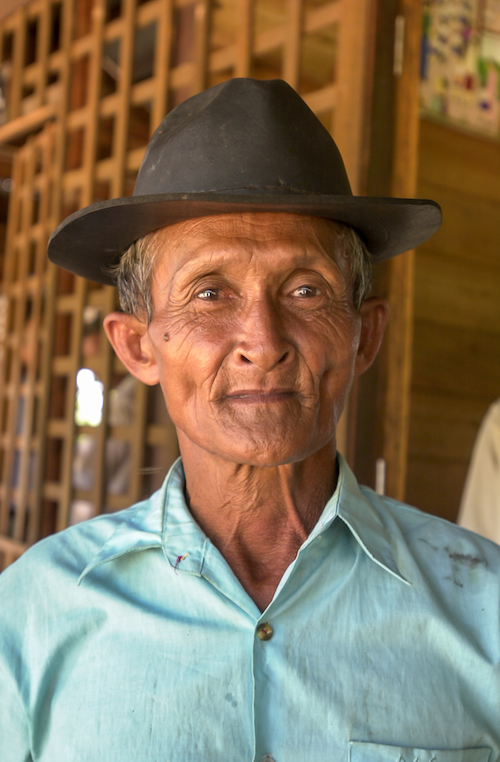 We then headed towards Beng, a small community on the Varin road. A very small grass hut school in bad repair had been replaced with a new, two classroom mini school, and it may one day become a core facility. It was already being used by almost a hundred children. The kids in the school were not yet in uniform, as the school had only just got underway – and we even heard that the local people had debated whether to await opening the school until we arrived. Fortunately, they had been persuaded otherwise.

A lively conversation ensued with the parents and grandparents, all gracefully and patiently sitting on the floor outside the school . We especially loved kidding around with the Leader of the Village, Yer Youg, a most dashing man in a wonderful trilby hat. By now it was mid afternoon, and the rain clouds were beginning to appear. But the Beng people insisted we visit another village, where we had no direct involvement, to meet the community.

So that is what we did, heading on the bikes across paddy fields to the east. We never did figure out the name of the village, but they had a small school built a little while ago, we think by one of the UN agencies. They were in need of furniture and books, so the PEO and Save the Children Norway agreed to see how they could help. It was a wonderful detour, for a couple of reasons. Firstly, even though there was no direct involvement from us, the people were warm, friendly, talkative and happy to have guests. It was nice to see such a crystal clear expression of the family values of the Cambodian people.

Second, we met Myra. She was 101 years old, and had obviously survived all the troubles of the Country. she had seen it all. Yet she had a wicked sense of humour, and was more independent than many we see at home. Myra was accompanied by two of her granddaughters, one of her great granddaughters and her daughter – Myra’s great great granddaughter. In all of our travels, we had never met that many generations of one family in one place. It was truly a memorable event.

All good things must end, and the weather was definitely getting a bit uppity. So we said our farewells. and headed back. We promised to send some of our pictures, as most of the villagers had no photos of their own. The road somehow seemed easier going back, and we were very quiet on the bikes, as we each reflected on the day. There is so much to do, yet today we all felt – Save, PEO and our family – that things were improving, step by step.

As we rode to where the Land Cruisers waited for us, the sky got darker, but no rain came. In fact, it only started once we were saying our goodbyes to our Cambodian hosts. And even then, the weather was kind enough to let us take a few group pictures for all to enjoy later. It even held back whilst we had a celebratory can of Tiger, our traditional farewell toast.

Another trip, another menu of food for thought.