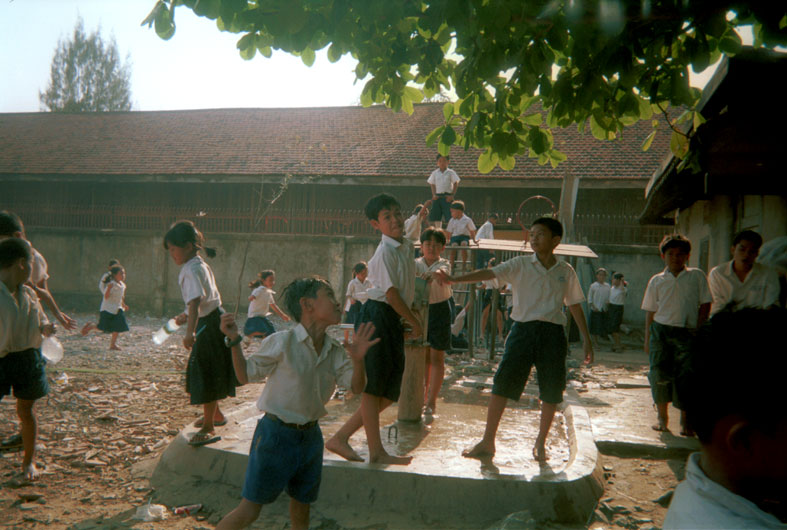 A photo documentary by Anne-Lise Aakervik In February 2003. I went to Cambodia for the first time. I am a Norwegian journalist, my name is Anne-Lise Aakervik, and my knowledge of the country at that time was of the terrible civil war in the 70’s and the killing of millions of people during the regime of Pol Pot.

Still, after 20 years, the wounds from Pol Pot’s regime haven’t healed. Even today a lot of children don’t go to school. Their parents don’t know how to read and write, as they grew up during Pol Pot times, and they were sent to labour camps. They lived in fear. Since 1980 the country has struggled to build up the

education system. I wanted to see for myself how the children manage their everyday life.

Cambodia is the land of children. They are everywhere, playing, working, going to school or begging. Over 50 % of the country’s population is children under 18 years. And nearly half of them have to work to support their families.

To be a child in this country is hard work, and the future prospects are uncertain. Even though many have a chance to attend school, few manage to complete elementary school and start senior education. To start to get an answer I needed to get close to the children. But when you use a translator it is difficult. I therefore brought with me disposable cameras and gave them to 5th grade pupils attending Baktok School and Norodom School in Phnom Penh, pupils at the floating school in the village Kampong Our and paper-collecting street kids at the Olympic Market in Phnom Penh.

I asked them to take pictures from their everyday life, the life that I as a foreign journalist, who doesn’t speak Khmer, will never get to know. “The purpose is to show children in Norway how your life is”, I told them. I wanted to make an exhibition back in Norway.

All of the children I had contact with responded positively to this challenge.

Photography is universal in its way to communicate. The cameras worked as a tool for the children in this connection. With them they could tell Norwegian children and adults about their everyday life, despite the lack of a common tongue and a distance half the world away.

The motifs are entirely the children’s choice. The only thing I asked them to do was tell stories from their daily life with the pictures. Otherwise they had free reign. Some of them had taken pictures before, others held a camera for the very first time. That fact made it very exciting for both them and me. From the huge amount of pictures, I’ve tried to pick motifs that I think show different sides of these children’s lives. On the way I had many surprises and acquired new knowledge.

The pictures show eagerness, interest and joy. I hope the exhibition touches those who attend it and that maybe they will be inspired to reflect upon

their own daily life. The pictures you see are all taken by different children, at home or school. I’ve never seen such pictures before. I could never have taken them myself.

I have cooperated with Save the Children, Norway, and they helped me to get in touch with the children in Phnom Penh.

The exhibition has already been shown in Norway twice. In February it will open at a conference for journalists, and later at a museum in Trondheim, where children from different schools will be invited to take part. My plan is to take the exhibition to Phnom Penh in October. Then the children who took the pictures finally will have an opportunity to take part in the exhibition. More information will follow at this website.

I want to thank Mick for letting me write about the project, and Save the Children Norway for helping me get in touch with the photographers.

Anne-Lise has just brought us up to date on the status of her project. She says:

“I worked all spring to get money or sponsors to take the exhibition. Save the Children, Norway, decided to help me. So I was planning my trip the last week of October (2004) and had started to plan workshops and other things to do. But suddenly everything changed for me, since I had got ill. Still, now I am feeling very well, and are working and living as usual. But because of the illness I couldn’t go to Cambodia this autumn. Lena (Richter, Save the Children Norway’s Director in Cambodia) promised me that the exhibition will be taken care of, and that all the children involved will get to see it, and write their own texts to the pictures.

I also have a copy of the exhibition in Norway so it is possible for local Save the Children groups to use it.

In fact this summer the exhibition attended a big culture festival in the north of Norway”.