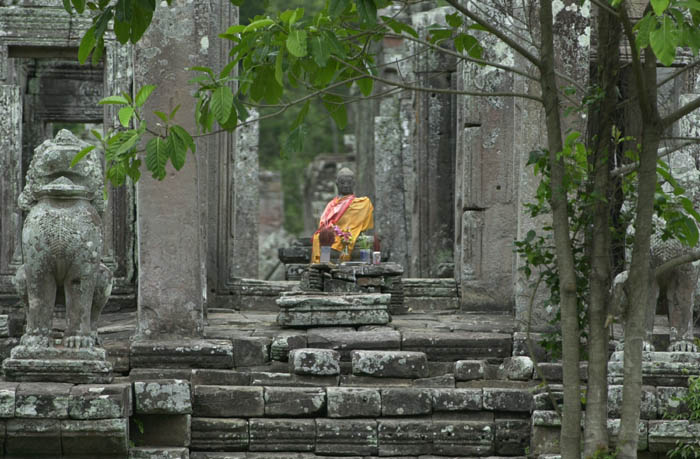 Ingrid, Mandy and I managed a “flying trip” to Siem Reap, to meet with Save the Children Norway and with the Provincial Education Office (PEO).

It is the rainy season, but then the area around Angkor Wat is always beautiful, especially as the light changes.  Clouds, thunderstorms and a certain darkness added to the mood.  One could walk though Angkor forever and never see or feel the same things twice. The Bayon is especially magical in the gloomy and damp pre dusk light (pictured in the header).

The PEO people are a great group.  They have good hearts, and good ideas for the future. It was very much like meeting old friends.  Save the Children Norway had worked with the Siem Reap PEO since 1993, so a well-established working relationship exists.

As we talked, on one side of the table was seated Gunnar, Save Norway’s head in Cambodia, and Sarath, that irrepressible teacher, project leader, and raconteur!  On the other side, the PEO was lead by Director Tor Kimsean, and our friend Ung Sereidy, the Primary Education chief who had visited Anlong Veng with us in March.

The essence of the work we have collectively started is to create new models to jump-start the Khmer Rouge Reconciliation Areas. At the same time, the program is designed to create sustainable quality school programs, and be a model for the future. The PEO Director estimated the sustainability/quality goal  would take 6-8 years to complete throughout the area. Another estimate was that, if you grade the Siem Reap teaching capacity as a ’10’, most of the areas they were working with were only 1 or 2 … that is, if you ignore the ‘ideological aspects’ of the ex-Khmer Rouge education.

In any case, the project is actually moving more quickly and more broadly than we had originally hoped. Kimsean and Sereidy brought us up to speed on where the project stands in detail:

1. Trapeang Prasat: The school building and teacher training program that we started this year was well on track. The first 5 classrooms at the cluster school are about 65% complete, and will be finished by end June.  Library and resource facilities are almost complete at the main school in Trapeang’s center. A major delivery of Save the Children Norway’s kids magazine ‘Mom & Map’ was due in June – in fact, we heard that this free, educational magazine is now one of the highest circulation items in Cambodia, and is eagerly devoured by the children at each issue.

The first teacher workshops have been done, and the essential school administration workshops will take place in the near future.

Sereidy’s teams have a good process in place to work with all districts – first, assess the competencies; then, design the program; next, implement the training;  finally, and, perhaps most importantly, establish ways for the District to self-manage and develop their own programs.

The goal is always self-sustainability.

The PEO now wants to focus on Trapeang Prasat’s program becoming a model for all such future activities in the Reconciliation Areas. As we had noted, the local government and the teachers in that area are most open and enthusiastic – and thus created a great environment for such modeling. In a sense the goal is to recreate very happy pagoda, much as existed pre war.  The pagoda was more than a school – it was the main community centre in every village.

About 50% of this years’ funding is going to Trapeang Prasat.

2. Anlong Veng: First, it seems the road to Anlong is about in place, and the journey time from Siem Reap only took 2 1/2 hours – it took over 5 hrs in March this year, and last year it could take days in the rainy season.

The area is also now getting a lot of publicity, some of it increasing with the March trip, as there was a gratifying boost in coverage in Cambodian newspapers about the children’s plight.  Anlong Veng also gets good funding from high profile donors and Government – the Hun Sen school opens soon, next to the Ta Mok school we mentioned in the Anlong Veng Diary – March 2000.  Thus, in this area, our assistance was more targeted towards training and administrative development than it is to school building.  The training program is identical to that being implemented in Trapeang Prasat, and is well underway.

The PEO have also about finished a 3 class room building at Lam Tong, about 3 kilometres from the main Ta Mok school. This is part of the project’s cluster strategy to start moving the schools to where the children are –  both to encourage attendance and cut down their walking time. It also puts schools in places where the bigger donors are not yet focused, and away from the land mines.

3. Angkor Chum: The very first schools are now being built in this District – 6 classes, about 65% complete. The local community is really enthusiastic about the program.  More work needs to be done in assessing needs and capabilities as we move forward.

4. Varin: The PEO and Save Norway have started assessment work in this district, and we agreed to bring forward the building of the first school from 2001 into the end 2000 dry season. There are just under 6,000 children of school age in Varin, and about half get some basic schooling today.

The infrastructure in the Varin area is essentially non-existent. This area is geographically closer to Siem Reap, yet because it was the last ‘hot battlefield’ in the area between the Government and the Khmer Rouge, it is even more poorly developed than Anlong Veng and Trapeang Prasat. It is still often easier to reach Varin by motorbike than it is by truck.

One key to success will be getting a ‘buddy’ relationship going with the Angkor Chum people, as they have a similar situation but somewhat better human resources. Sereidy has involved the Varin head teacher in training sessions at Angkor Chum.

The PEO and Save Norway will now be preparing a detailed project assessment and proposal.

5. Svay Leu: We discussed extending the project beyond its original geographic brief. In 2001, the PEO will use the Varin approach in the Svay Leu area (also one of the last battlefields). Just as in Varin, the PEO hopes to engage resources from the nearby Soutr Nikom District to work with Svay Leu people. They target to have a 2001 plan ready to go by about November, so we can catch the dry season.

6. Technology:  This is a new area for the project, which was put on the table recently.  The core idea is to provide better two–way communication between the PEO in Siem Reap and the Schools – only simple radio exists right now, and that is only between the PEO and the District offices, not the schools themselves.  And telephone development is still uncertain.

Eventually we foresee connecting the schools together, and also connecting to the Internet – to train teachers, children and parents alike.

Whilst there are several ‘high tech’ NGO ventures starting in Cambodia schools (including Apple and MIT), these tend to be further south.  We also believe it is necessary to make the system more robust than the average PC or Mac allows so it can operate stand alone and in remote / bad conditions … and at lower cost so we can get maximum reach.  Finally, given most of the children can hardly read Khmer, never mind English, we also need local language software.  We are talking with some Linux experts.  Still, we do not want the technology to drive the project, but we must let it be needs driven. Earlier evaluations have taken place, and we will start with actively pursuing linking Siem Reap with Trapeang Prasat.

Some good thoughts for the future also came up in discussion.

First, the projects would probably benefit from more ‘single point’ coordination in the various Districts.  Because so many NGO’s and others want to help in Cambodia, and because the Authorities are so eager to receive the help, sometimes projects trip over each other.  The PEO are keen to be sure that only things that are needed or which further the master plan are executed – but we need to help set up some better mechanisms for this coordination, without upsetting other NGO’s and donors.

Second, we need to explore more just what it means to develop a truly Child Friendly School system.  This is a great concept, and has success in many other countries – but because of the ground zero nature of the situation in the Cambodian Reconciliation Areas, it will be a long road to travel.  Still, we need to be sure we are setting the principles for this eventual goal, as we build the programs.

All in all, it was a trip that was over too quickly, but one that was very worthwhile. There is so much to do, but there are some very willing hands and brains at work in the Siem Reap area. We came away feeling that we wish that we could do more, and faster.

The children are so eager to learn, and the communities have already proven their enthusiasm to support them.