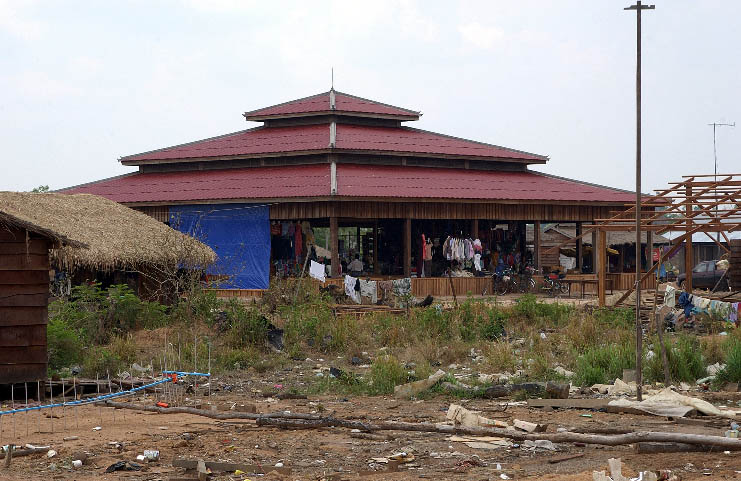 All but Eugene had been to Siem Reap before, not only to see the sights but also to make the trips up country to see the school projects.

What was very different on this trip, though, was that we were joined for our days in the field by H.E. Im Sethy, the Secretary of State in the Ministry of Education of Cambodia. We had met before, on a previous visit to Phnom Penh.  But this was our first joint field visit. Of course, we had the usual film crews from National Television, although this time they were more interested in the Minister and his impressions than in us.

We all met outside the Grand Hotel D’Angkor in Siem Reap. It is a wonderful place, as we have noted before, and we are so lucky to be able to stay there.  Whilst Siem Reap now has many new hotels and tourist facilities, the Grand still is a refuge of tranquillity, and it stands in marked contrast with its surroundings. The hotel also has a well-regarded program to train local people in the hospitality industry.

The first (and best) news of the day was that the Government and Save the Children had just formally signed the contract for major new money ($1.6million) from the Japanese Social Development Fund (JSDF), as referred to in the June 2001 diaries. This means that the projects that we have started can be extended across the entire Province of Siem Reap. Good news indeed, and a great credit to the Provincial Education Office (PEO) and Save the Children.

The group included our old friends the PEO Director Tor Kimsean, Ung Sereidy, the Primary Education chief, and Phalla. Sounds silly, but we all feel rather like brothers and sisters these days.

Anyway, we climbed into a small fleet of Land Cruisers, and set off. As we drove past Banteay Srei, it was very noticeable that the entire road had many new houses and small businesses along both sides, a far cry from our first trips. There were also more (creaky) buses and (pick up truck) taxis on the road, so progress is not always for the better. Lots of dogs ran alongside, and for the first time we saw many ox carts. Most of the mine clearing signs along the road were now gone, yet deaths still occur when the rainy season waters shift mines in unexpected places.

As we drove along, Sarath gave us an update on all he had been up to since last June, in his own inimitable style. Of particular interest was the joint Save the Children / UNICEF work in the ‘floating village’ areas.  This raises unique schooling issues, and as the boat dwellers want to stay on their boats, it also leads to unique social development issues. Maybe on a future trip we can visit.

We got to know Im Sethy a little better as we travelled.  He trained as a high school teacher at the Royal Phnom Penh University, graduating  in 1969.  He then worked at an Upper Secondary School and in the Ministry of Education before the Khmer Rouge takeover.  Im Sethy’s  family were also teachers, and they suffered severely in the late 1970’s at the hands of the Khmer Rouge. Many of his immediate family died, some in Tuol Sleng. He himself was forced to be a slave labourer. Like most Cambodians of his age, he had thus been through many hardships, but he recounted them with modesty and grace.

In early 1979, he was among the first ten people to restore from scratch the Ministry of Education. His political career really started when he became a Member of Parliament in the 1993 elections, and he is very firmly focused on trying to improve the education situation for all. The more we got to know him, the more we respected his open and determined approach.

MOEYS (the Ministry of Education Youth and Sports) has developed an ‘Education for All’ strategy based on three principles:

Sounds good in theory, and it is actually happening. In 2001, a National Committee for ‘Education for All’ was formed with the composition of concerned ministries and international organizations and NGOs, and progress is reported regularly.

The road to Anlong Veng from Srey Noy seemed to have deteriorated, and the bush and trees were once more encroaching. It was not quite as bad as our first trip (in 2000), but it took 50% longer than last June.  Sarath noted that Malaria was still a problem in the area. He also pointed out one of our new mini-schools about 5 kilometres north of Srey Noy, built where villagers had previously started their own.  There was a lot of forest clearing on the way, and the Red Cross (France) was helping support new settlements with wells and clean water, especially just south of Anlong Veng.

The Halo Trust was also active in odd spots clearing (hopefully) the last mines from the settlement areas. Rather ironically, as we got closer to Anlong, not only did the number of new houses increase, but the density of TV aerials sprouting from these houses grew exponentially.

We stopped at the Lumtoung School.  This is a two building school – one section built by Carre, and the other by our project.  It has decent facilities, and it is still overflowing with playful children.  People were moving their families to be close to school, as it often happens. We talked with Tang Van Dat, a volunteer who came in 1999 to the region, and who taught at the school.  He lost his arm in an accident but his good humour and sense of purpose was irrepressible.

No matter how many times we travel here, we cannot but admire the people trying to do so much with so little.

Passing through Anlong Veng quite quickly (although we did get a late morning Tiger beer), we arrived in Trapeang Prasat for lunch. Cheat Chum, the District Governor, was his usual friendly self.  He already knew Im Sethy, so we all settled down for a fairly serious conversation about how things were going. Incredibly, he could now report that the Trapeang Prasat Commune had achieved almost perfect 98% primary school attendance – well up from 50% just two short years ago.  Their record was still ahead of Anlong Veng, and the school system was firmly in place not only as a Provincial model, but now as a National model. In fact Im Sethy remarked that at 98% they were only 2% short of the Government’s “Education for All” target,  a score even many city schools struggle to reach. We met lots of kids and parents at the school – including one lady who we recalled from our very first visit.  Mdm. Roeun was with her family in fairly poor living conditions. But now, she was a proud mum and a very active member of the Commune committee. (Update: in 2019 she was the Vice Chair of the Village Commune Committee). We talked about her youngest son who, two years ago, had difficulty moving and communicating.

He was standing by her side as we talked, he was doing well at school, and she smiled broadly.

With Cheat Chum we visited the nearby minority O Son tribal commune.  Their school was still a grass roofed one, although the hope was to rebuild in the coming year. Interestingly, the original community lived in the middle of nowhere, 30 kilometres from the nearest mainstream village. They had all moved to be near to Trapeang and its facilities, and to get closer to schooling for their children.

On the way back to Anlong Veng, we briefly visited the school that the project built outside of Trapeang. We had reported on this in the last diary and gallery.

We also visited a school along the road built by the Government. It is not our role to criticize, as all schools are valuable. But its location was not exactly ideal. The strategy of the PEO and Save the Children – to put the schools closer to where the majority of the kids are – is the right one, if you want to build strong attendance records.

Anyway, we got back on the road to Siem Reap. Unlike our trip in March 2000, we saw many birds in the evening air. We also saw many paddy fields.

And we did see a lot more hope.