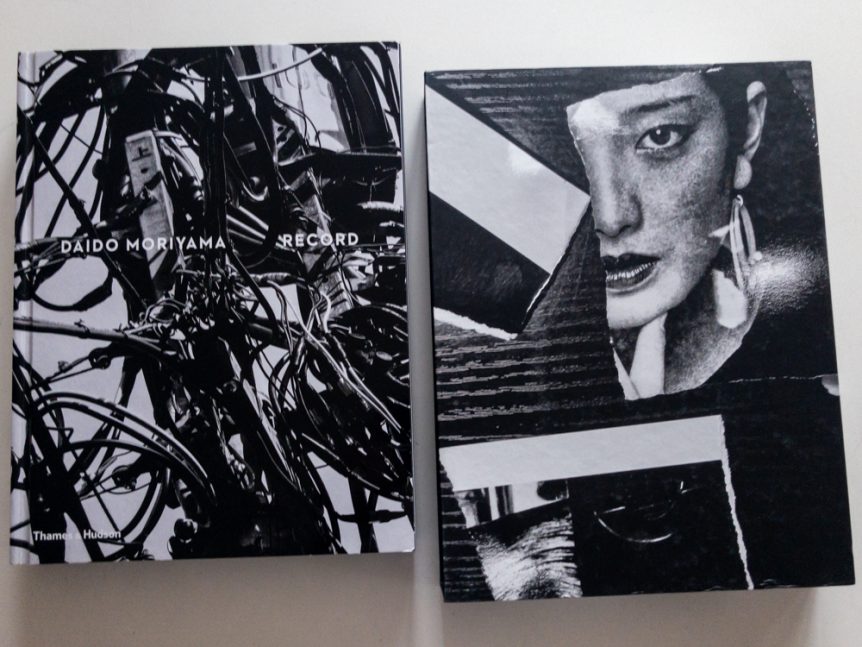 Daido Moriyama, when history is written, will be noted as one of the greatest photographers of his generation.

Japanese photography has always interested me, even before we lived there. Yet it still seems under-appreciated in this part of the world. Witness Bystander by Westerbeck and Meyerowitz – even in the latest (2017) edition they totally ignored Japanese Street Photography, marring an otherwise excellent history of the genre.

Record is a compilation of Daido Moriyama’s first 30 editions of his magazine series. He is arguably one of the greatest living street photographers. Born in 1938, Moriyama continues to astound with his eye and his output, being one of the most prolific photo book producers, and a perpetual traveller.

On Moriyama’s wall in his Tokyo home hangs Nicéphore Niépce‘s “View from the study Window“, reckoned to be the first ever permanent photographic image.

He says it is his constant inspiration, seeing the image first thing in the morning, and last thing at night.

Moriyama was a member of Provoke, a movement born in the 1960s seeking some new truths about art and Japan’s role in the world. Provoke paralleled, but was different to, similar ‘protest’ movements in the West. Its focus was not anti-war, as in the US and Europe, but pro a unique Japanese way of seeing and being, rebelling against the American occupation which, whilst long over, had lingering influence with US bases on Japanese soil.

I have written about Provoke here.

After being part of the Provoke group, between June 1972 and July 1973 Moriyama produced his own magazine, Kiroku. This was later referred to in English as Record, and is an ongoing diaristic journal of his work.

Ten years ago he was able to resume publication of Record, and to date he has published thirty seven issues. Moriyama was influenced by the American photographer, William Klein, and especially his book New York from the mid 1950s, with its graphic, almost violent style, full of social critique.

Moriyama on Klein, in Record:

“My encounter with Klein’s new book New York when I was just twenty two and still loitering at the door of the photography world was a defining moment for me.

The abundant results of extremely violent and freewheeling camera work made me dizzy”.’

“So many photographers, HCB is one, keep telling us life can be beautiful. But for Daido, life can be, and is, pretty shitty … and photography, as well. Now, after rubbing our noses in that for years and years, he has just put together a show in Paris – the first show of his that I’ve seen – and it’s like in the movies, when the man says to the girl, ‘hey take off your glasses’ … and she does. ‘But, but … you’re beautiful!’… and she is.

And today we see Daido’s tragic, despairing, no way out, end of the world photos for what they always were, fucking beautiful, like he is himself. So … more power to him!” Moriyama also read Jack Kerouac‘s On the Road, like so many other photographers at that time. He travelled around Japan, taking pictures from the cab of a truck, hitching across the country.

“As a photographer, I regularly talk about ‘snaps’ as if it was perfectly natural, but as soon as I think about what a ‘snap’ actually is, then I’m usually at a loss for an answer.” The book collects work from the original thirty published issues of Record, edited into a single sequence, with Moriyama’s text as it appeared in the magazine.

Produced at the magazine’s original size, with an introduction by Mark Holborn, it features more than 200 images.

Japanese photographers were both energised by and perfected the photo book, rather than focusing on any one specific image – Ravens by Masahisa Fukase being perhaps the ultimate example.

Whilst some single images of Moriyama’s have become ‘iconic’, I tend to see his work in a series, as story telling. Record demonstrates that superbly. There is a fascinating interview with him on YouTube, courtesy of the Tate, which is well worth viewing. He continues to publish Record, now in the 37th edition.

At Paris Photo, I also purchased issue 32, Kobe. From the publisher’s blurb:

‘In his twenties Daido Moriyama spent a short period wandering the streets of Kobe. Particularly drawn to the harbour, he delighted in watching countless ships being loaded, walking around the foreign settlements in Yamate and Kitanocho, or helping to print souvenir pictures at a small photo shop. For an exhibition of his work at the Hyogo Prefectural Museum of Art in 2016, Moriyama was asked to dedicate a section to his Kobe photos. Discovering he had surprisingly few, considering his affection for the city, he decided to take more. Traveling back in time to chase that romantic dream of his youth, he discovered a completely different place, but one nevertheless just as thrilling’.

By contrast, the 34th Record focuses on the city of Chichibu, a place which has traditionally depended on silkworms and limestone as economic staples, with quiet backstreets and parks. This is in stark contrast with his early work recording the violence and drama of road traffic accidents in the metropolis, yet maintains the same purity of vision. In fact, Record ends in Afghanistan. Moriyama is famous for his gritty, grainy high contrast black and white imagery, often picking up and refining the Are Bure Boke style of Provoke.

Yet he has increasingly shot in colour, and Record is one of the better selections of this side of his art. Moriyama is quoted as saying

“When I go out into the city I have no plan. I walk down one street, and when I am drawn to turn the corner into another, I do

I am like a dog: I decide where to go by the smell of things, and when I am tired, I stop”.

One of the last images in the book was taken in Morroco, where Moriyama’s iconic image of the Stray Dog was hanging on the wall.