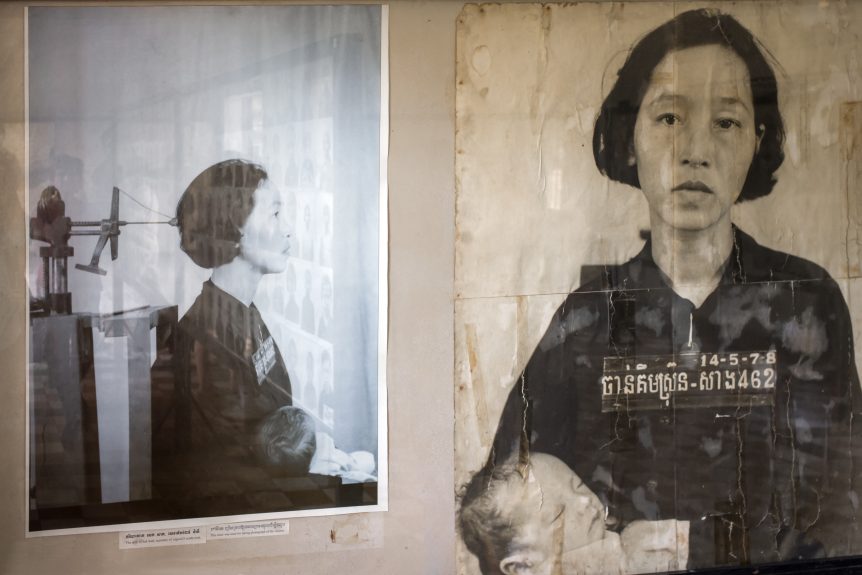 To me, ‘Dark Tourism‘ is rather inevitable. Places like Tuol Sleng in Cambodia seem to do a better job of earning tourist dollars than in aiding national reconciliation. But a glance at the visitor’s book (and the limited academic research available) shows that most visitors come to bear witness and pay respects.

Craig Wright, in his chapter ‘Contested National Tragedies‘ in ‘The Darker Side Of Travel‘ notes that:

Tourism activity offers a rare, observable form of ethical behaviour. Tourists ‘vote with their feet’, and, as such, demonstrate in visiting ‘dark’ heritage sites that these are morally acceptable spaces to occupy. (pg 143)

Sadly, there is little research on the victim’s names, so their photographs appear anonymously on the walls of the prison – even those noted by history, like Hout Bophana and Chan Kim Srun (above) are not named in English for the many tourists to understand their history.

The focus therefore inevitably drifts to the instruments of torture rather than the victims themselves.

Richard Sharpley, in his chapter ‘Dark Tourism And Political Ideology: Towards a Governance Model‘ in ‘The Darker Side Of Travel‘ suggests three problematic areas with Tuol Sleng (and Choeung Ek).

To compound this, in 2005 Choeung Ek was ‘privatised’ with a lease to a Cambodian-Japanese company, to develop its tourist potential.

Related, the photography and recording of violence and atrocity is essential, as authors like Susie Linfield argue. The key is to educate and not trivialise or titillate.

What is more problematic is burial sites which can become objects of tourism and even ‘pilgrimage’ – Pol Pot’s cremation site, for example, north of Anlong Veng. And yes, I am ‘guilty’ of taking photographs there.

It is not surprising that no one wanted a Hitler memorial, though the Mao and Stalin mausoleums were interesting counterpoints.

A subsequent conversation with Stella Baraklianou

There is a lot of food for thought there Mick, definitely.

I would however perhaps point back to the “ethics” and alongside some of the critical readings, add some key texts

There is also an edited volume that is electronically available through Falmouth Library “Cultures of Fear. A critical Reader” (2009) London Pluto Press

I don’t have ‘Cultures of Fear‘, so will add that. Thanks for the reference.

If I recall, Rosler quite liked Adam Clarke Vroman, as she believed he was trying to portray ‘things as they are’. I must admit, I enjoy his work too, and he should be better known and studied. That said, how we really know how things are remains a question for the ages.

It’s fair to say that Rosler comes at most things from a ‘political’ viewpoint – hence her comments that most documentary photography is essentially Imperialist in intent (or at least in end-result). And ‘liberal do-gooding with a point to make, supporting the elite’ (my paraphrase) permeates her line of attack.

Yet, again, without such imagery, how can we even begin to know what is going on? On this, Susie Linfield, like many others, makes the point that this involves both the photographer and the spectator. She specifically addresses ethics.

Looking a bit more into my notes, in the intro to her book, Linfield writes:

‘ I am writing, even more, against the work of Sontag’s postmodern and poststructuralist heirs, and their sour, arrogant disdain for the traditions, the practice and the ideals of documentary photography’. (pg XV).

I happen to agree with that.

Stepping back, we could all pay more attention to the individual victims, and their stories. In that regard, bringing alive the impact of the camera (Caswell) on those anonymous ‘mug shot’ victims may be, in the absence of solid biographical data, one of the few things that we can do to help educate our audience.