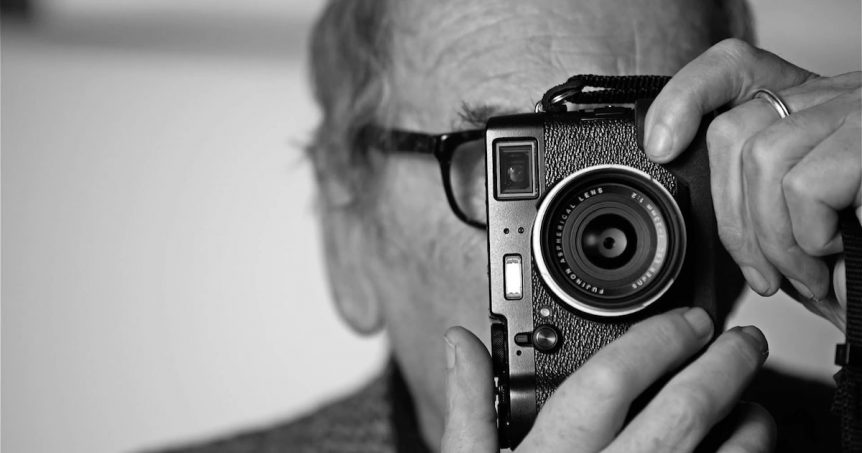 Just finally catching up with the excellent documentary on David Hurn from the BBC. It only has a few hours left to be available – and outside the UK it can’t be viewed. So here is a version from dailymotion:

The video gives great insight into David’s working practices, and especially his ability to engage at an emotional level with his subjects. He’s clearly a bit of a cheeky chappie, even now, at 84 years old, so that helps!

David was filmed for BBC’s Monitor programme by his friend Ken Russell, in 2017. As he was getting started, he was in a creative circle including Sir Don McCullin and Philip Jones Griffiths. David reflects on how his practice grew, his younger self and the Swinging Sixties. The Sixties is, of course, ‘my era’, so it is delightful to go through his images of that time in the 2015 book, The 1960s: Photographed by David Hurn.

“Life as it unfolds in front of the camera is full of so much complexity, wonder and surprise that I find it unnecessary to create new realities. There is more pleasure, for me, in things as they are.” (pg 9)

His life’s work, though, is much more than about a period in time. David covers so many of the people and events of the past 60 years. His work ranged from portraits and movie sets, pop culture to newsworthy events. The Beatles, Aberfan, Grosvenor Square demonstrations, Barbarella. It’s all there.

‘You shouldn’t be giving your subjects many instructions. It’s a case of sitting down and talking to them, to the point where they can be themselves, rather than a person who is self-consciously aware of having their photograph taken’. (pg 200)

Looking at pictures he took at events, it’s clear that the anonymous participants were just as interesting to David as the main attractions.

Whilst design is not the ‘end game’ for David, patterns are certainly intrinsic to his work.

‘You need a good sense of geometry when you are taking pictures in a situation like this’. (pg 88)

For example, on the street, he gets into an interesting space, and then is very patient in waiting for things to unfold in front of him. This is a classic: The Promenade at Tenby (1974). Picture from National Museum of Wales

Martin Parr described it as ‘the perfect picture‘ in the video. I am not sure I agree with that, as there are a few overlaps in the image which slightly annoy – but it is damn good.

In many ways, I would consider him ‘the street photographer’s photographer’, amongst other possible titles we could bestow.

Back to the video, David says photography is:

‘ … like a game, trying to capture in one picture how you feel about something’.

And, whilst he says he is not good at posing people, he does

‘… just go up to them, take an interest in them and then take a picture’.

‘… gets right inside the story, gets accepted as part of it, stands in the right place at the right time, and presses the shutter’.

He also notes that a good picture can beat propaganda every time (the story of the Russian soldier buying a hat for his wife).

The video prompted me to re-read his book with Bill Jay, On Being a Photographer (1996).

It is full of practical and pithy wisdom – and not without its humour. I had to smile at this quote:

‘I was discussing [my frustration with photography academics] with the chair of a University Philosophy department when she stated that most academics in photography of her acquaintance would not even pass the interview to become a beginning student on a rigorous philosophy course!’ (pg 74)

More seriously, I think his attitude is not anti-academic, but more pro-action. David goes to great lengths to explain how he works, how much practice we all need in our craft, the important of the apparatus, and the value of a well-defined personal approach to working with subjects and scenes.

Both he and Bill Jay and accomplished photographers and educators. I found David’s focus on the importance of a perfectly exposed contact sheet fundamental to his work – to be able to look at the totality of a body of work, and to make both processing and editing decisions as a result. That of course is still possible with film, and I imagine we all do it, though not as rigorously as David. We can do something similar by printing from Lightroom – but how many of us actually do?

I also greatly admire his dedication to print swaps. He has amassed an amazing collection, essentially for free, and this is now being made available at the National Museum of Wales. That’s a project I should be more active on.