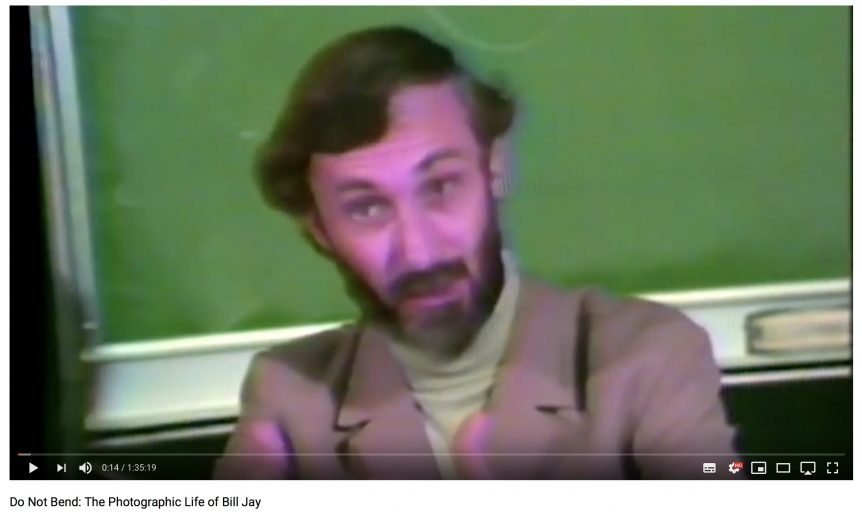 This brilliant and insightful movie has just been made available on YouTube.

For anyone that hasn’t seen it.

From the United Nations of Photography announcement about making this available:

‘Bill was a great believer in the sharing of knowledge, experience and beliefs and we therefore felt it was appropriate to make our feature length documentary on his life available for all to see. The film features exclusive interviews with Martin Parr, Brian Griffin, Daniel Meadows, Paul Hill, Alex Webb, Brookes Jenson, Homer Sykes, Anna ray Jones and archival footage of Bill himself telling his story his way!

Bill Jay was a photographer, writer on and advocate of photography, curator, magazine and picture editor, lecturer, public speaker and mentor. He was the first editor of the immensely influential magazine Creative Camera and the founder and editor of the equally influential Album magazine. He opened the first ever photography gallery in England. He is the author of more than 20 books on the history and criticism of photography, approximately 400 essays, lectures and articles and of the Lens Work magazine column EndNotes’.

‘I have tried to indicate that disturbing images are inevitable – and that they are always healthy. Even those that fill us with disgust and abhorrence can indicate we care about moral values, that we are part of an upsurge in human consciousness. They act, paradoxically, as indicators of the state of our society’. (1992: 43).

‘While images still have the capacity to disturb us, I have hopes for both the human race and the medium of photography’. (1992: 43).

United Nations of Photography. Do not bend: the photographic life of Bill Jay now available for free on YouTube! 2019. Available at: https://unitednationsofphotography.com/2019/04/21/do-not-bend-the-photographic-life-of-bill-jay-now-available-for-free-on-youtube/ (accessed 25/04/2019).