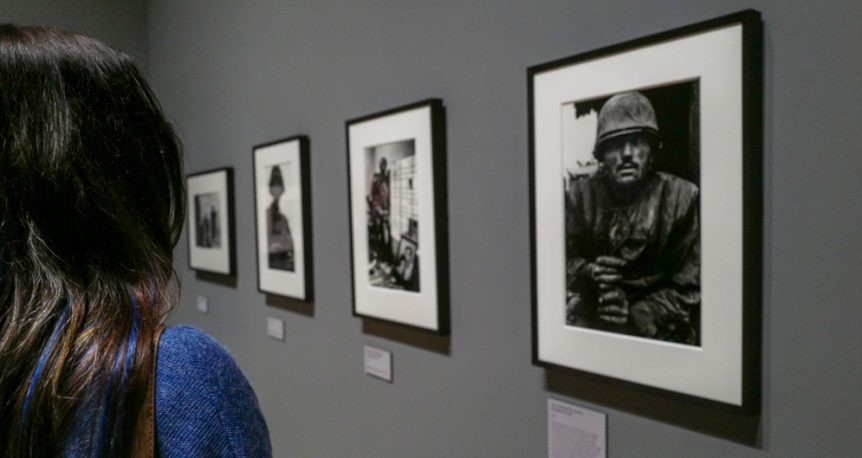 Ingrid and I have seen a lot of exhibitions over the years, but the current Don McCullin show at Tate Britain really rates as one of the best. If McCullin ever took bad photographs, they were well hidden.

I’d compare that with the concurrent Diane Arbus: In the Beginning show. Lots of historically interesting images – beautifully laid out with a separate ‘column’ for each image – but frankly some real duds. I sensed a perplexed audience., which only really got satisfied with the ‘Box of Ten’, added to MoMa’s original show by the Hayward.

I am not going to write a full review here, as that’s been covered by Adrian Searle at the Guardian – Witness for the Persecuted, with which I can only agree. There is a rather more contrary view. This addresses McCullin’s possible (initiated?) complicity with the terrible situations he saw. It also notes that later in life he ‘walked away’ from photojournalism, and thus to a degree disavowed its effectiveness.

There is another review is by Lewis Bush, Nihilistic Photojournalism. It’s a fair review, though seems to be attempting a tilt against non-existent windmills. If McCullin was so worried about the genre, why exhibit at all? Isn’t the most honest response to put the work on show, and let the audience decide?

In his autobiography, McCullin said:

‘I had long been uncomfortable with my label as war photographer, which suggested an almost exclusive interest in the suffering of other people. I knew I was capable of another voice and now, I realised, I had the chance to prove it, almost on my doorstep‘. (McCullin, 2015: 291).

He comment reflects the time when he became preoccupied with landscape, and he decided to build a studio extension to his Somerset property.

He goes on to write:

‘I was resolved that there could be nothing chocolate-boxy about a  McCullin landscape‘. (2015: 291).

I read this not as a denial that his war photography meant nothing, but rather that he recognised his own position in the photographic canon, and was determined to do more than live on his past fame – albeit with recognition that he was, to some extent, trapped by his own style of photography.

I want to add some personal take-aways from the show, especially as regards to my future practice, and in particular the modes of presentation.

Firstly, I was a huge fan of McCullin’s ‘back in the day’. In fact, I recall seeing many of the images when they first appeared in the Sunday newspapers. For a while I wanted to be a photojournalist, and particularly a conflict photographer. Life, probably fortunately, got in the way of that dream.

The other inspirational figures of the time in the UK (Bailey, Lichfield, Duffy ..) never really hit me as hard. Recalling that the 1960s were probably the first time that named photographers became public, media stars, in many ways the choice was binary. Doo you aspire to be a celebrity photographer – drugs, sex rock ‘n roll (Bailey) –  or do you want to make a difference (McCullin).

Of course, now I am better equipped to articulate those feelings and critical context. But from the beginning, there was always something about the composition and sheer emotional, human power of McCullin’s photographs that caught my attention.

These quotes from McCullin help me understand.

‘Photography for me is not looking, it’s feeling. If you can’t feel what you’re looking at, then you’re never going to get others to feel anything when they look at your pictures? (McCullin’s website, biography).

‘The photographic equipment I take on an assignment is my head and my eyes and my heart. I could take the poorest equipment and still take the same photographs‘. (McCullin, 1983: 11)

Digging into my art archives, I used his work to sketch from. 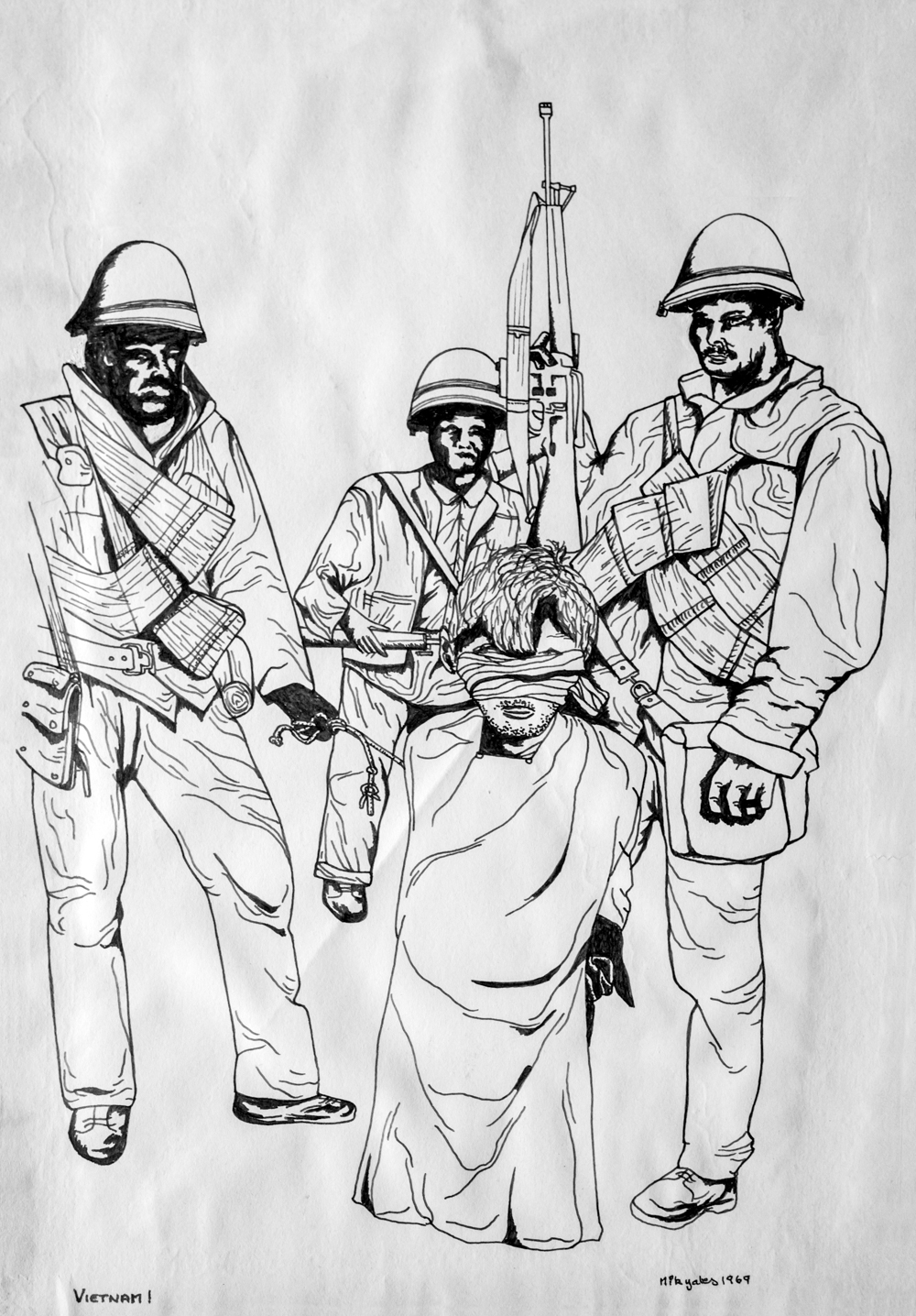 So it was more than a little exciting to actually see this photograph printed by McCullin, right in front of us. 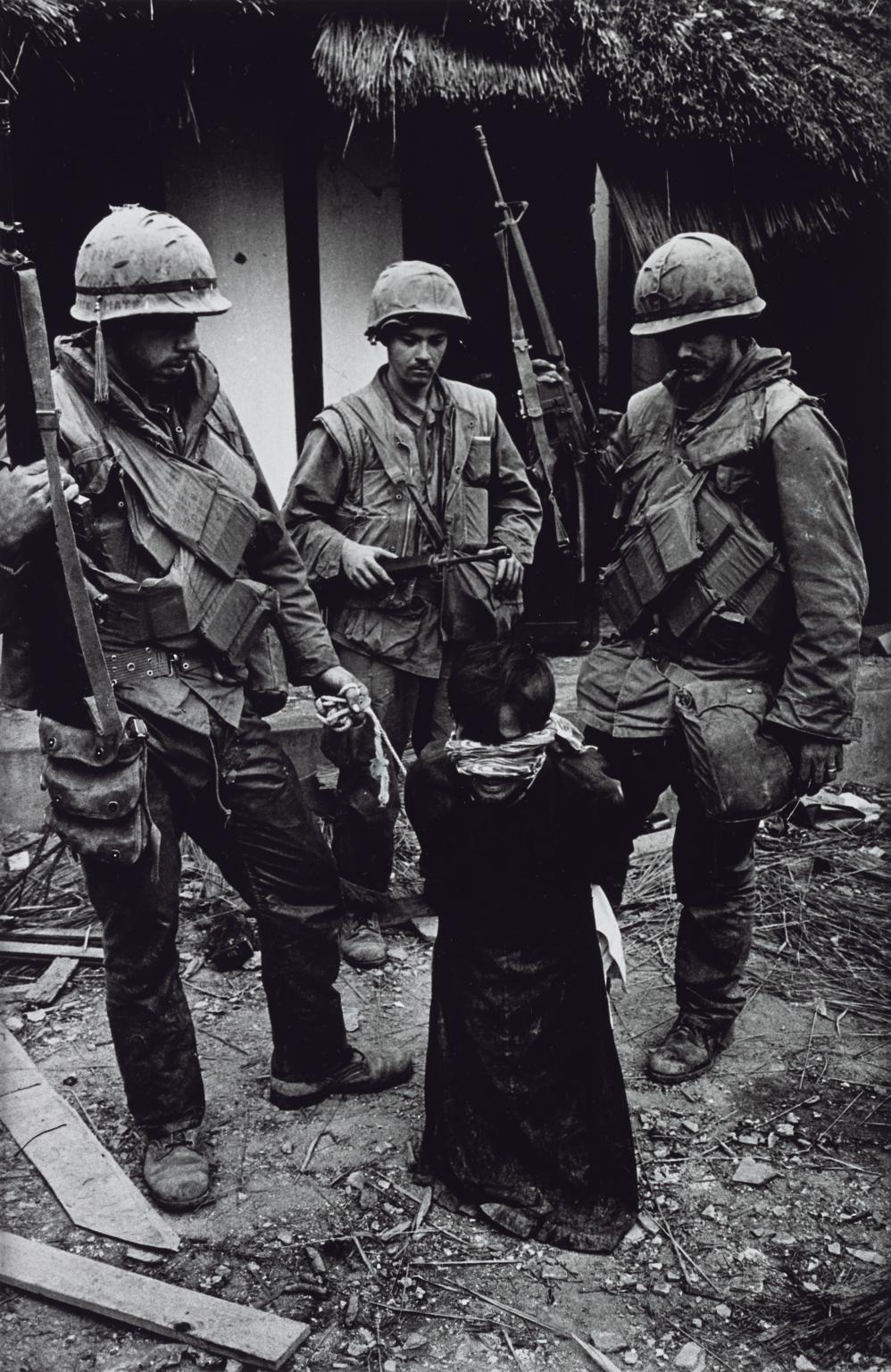 Don McCullin. 1968. US Marines Tormenting an Old Vietnamese Civilian, The Battle for the City of Hue. Printed 2013 Don McCullin born 1935 ARTIST ROOMS Tate and National Galleries of Scotland. Purchased with the assistance of the ARTIST ROOMS Endowment, supported by the Henry Moore Foundation and Tate Members 2014 http://www.tate.org.uk/art/work/AR01199

So, what are the lessons that I am taking away from this exhibition?

First, we must look. For me, the debate about the viewing of atrocity images is well past – Elkins, Linfield, Batchen, Struk, Caswell, Azoulay were all right, from their varying perspectives. Sorry, Susan.

‘If I could, I would take this day out of my life, demolish the memory of it. But like memories of those haunting pictures of the Nazi death camps, we cannot, must not be allowed to forget the appalling things we are all capable of doing to our fellow human beings‘. (2015: 136). 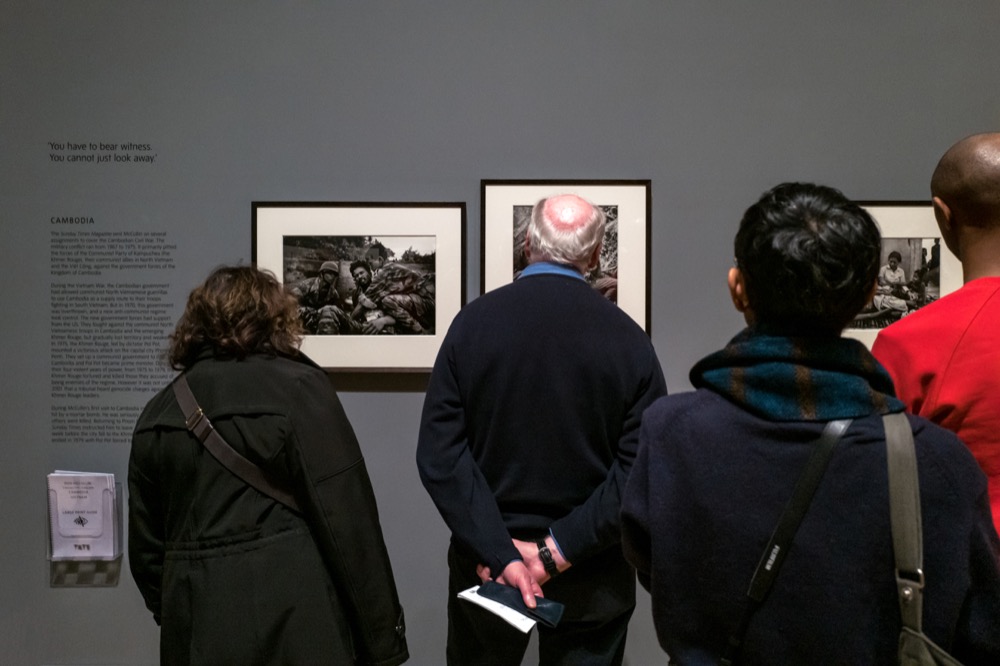 Second, respect. McCullin keeps coming back to both having the responsibility to take the pictures, whilst also respecting the subject. In some cases, he walked away as he knew his presence would cause a death. In other situations, he tried to get tacit, eye to eye approval, whilst taking the photograph.

‘Photography has given me a life… The very least I could do was try and articulate these stories with as much compassion and clarity as they deserve, with as loud a voice as I could muster. Anything less would be mercenary’. (McCullin’s website, biography).

I could not agree more, and have this reflected in my artist statement.

Third, keep taking pictures, of all kinds. McCullin’s work on landscape and still life was excellent, even though his reputation lies elsewhere. In fact, this change in his practice is very important to McCullin. Although printed a little too dark for my taste – McCullin has his reasons, he sees battlefields – every image was beautifully composed and carefully thought through, to printing.

Fourth, the print. McCullin printed everything himself, mainly silver gelatine. I looked very carefully at many photographs – the deepest blacks, subtle greys and almost chromium whites. The impact of his work was intensified by his craft, and that is something I need to consider very carefully for my future exhibitions. 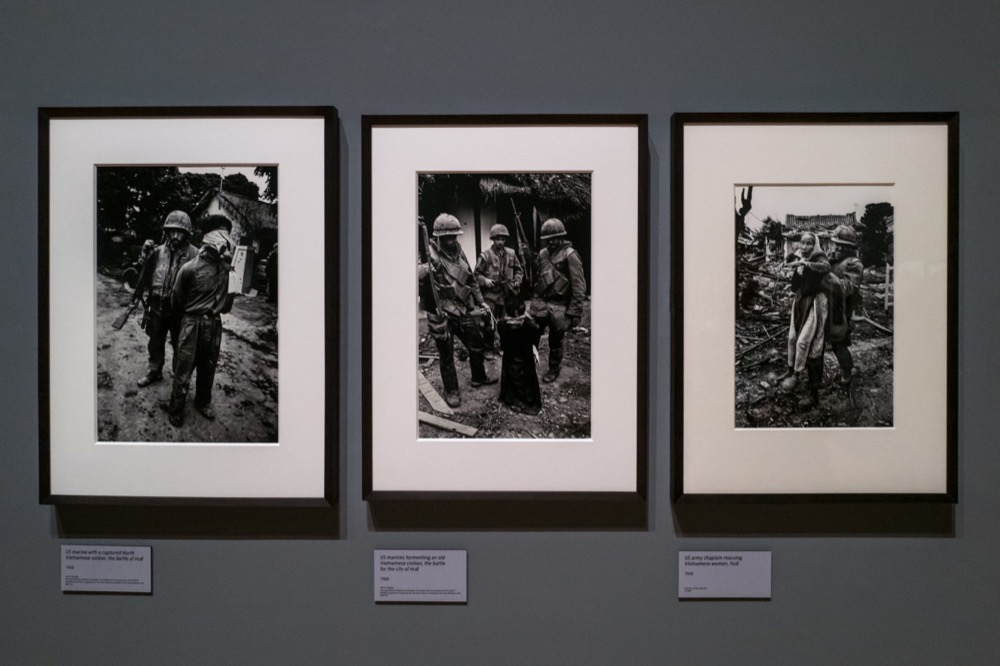 Fifth, the edit was subtle but ever present. In each series – Biafra, Cambodia, Cyprus, Northern Ireland, Vietnam et al – the images flowed naturally, and without forcing the viewer. Throughout, there was encouragement to study everything.

Ingrid and I noticed how people seemed to be reading everything, as well as inspected the photographs.

Sixth, presentation. The colours and layout in the gallery was simple but effective. Grey walls, with everything printed on the walls, easy to see. The show was punctuated by quotes, which, as it progressed, revealed McCullin’s beliefs about photography, and his personal role in communicating important issues. There were no ‘tricky’ lights – everything was evenly lit. 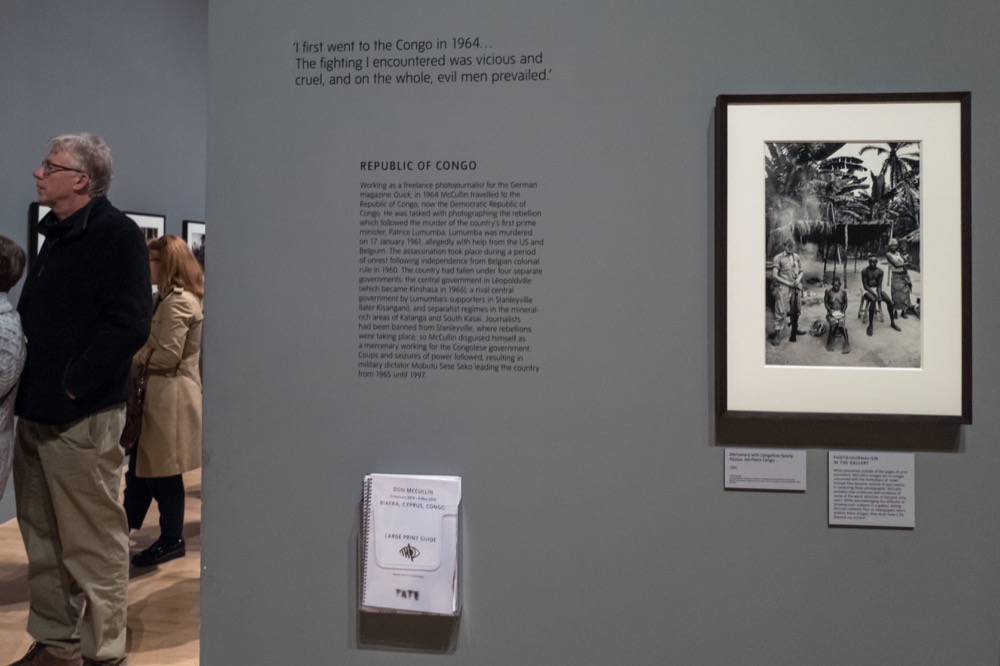 That is perhaps where I would likely differ. I hope to see my final images large and starkly lit, as I think that better fits the storytelling I seek. The aim of a  retrospective is to ensure every image is ‘seen’, and there were dozens. Few images were printed especially big, so the effect was a form of historic continuity.

Seventh, the video, of images as originally shown in the magazines, was well produced, and essential to understanding the McCullin story. I remember seeing many of those magazines, and it was a perfect way to see the original context for his work. It was consistently packed with viewers and was, in many senses, McCullin’s version of rephotography. 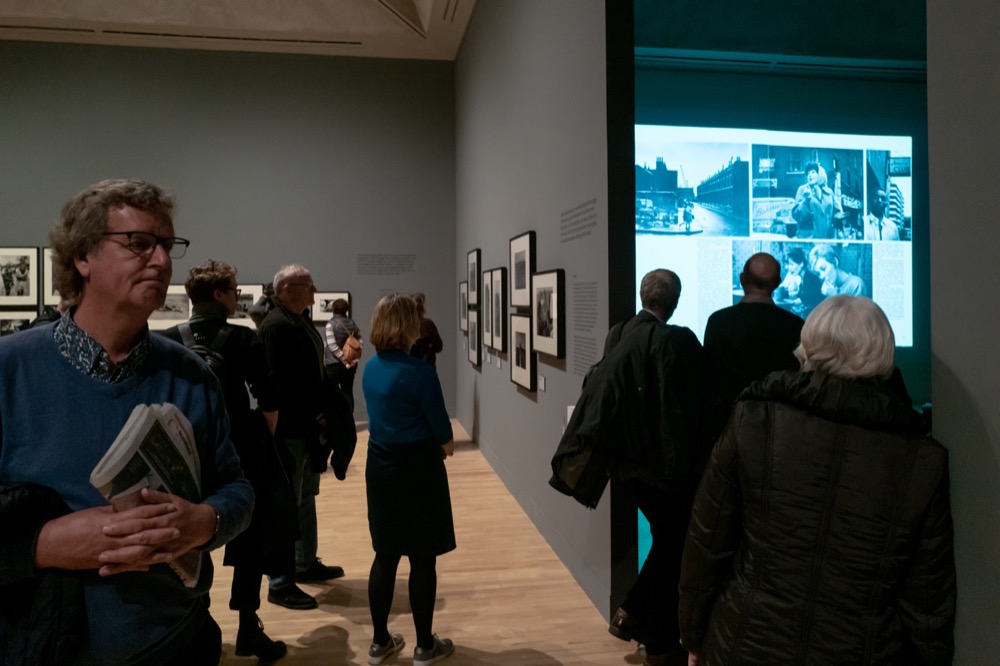 Eighth, art and photography. On the wall in the exhibition was written this explanation as to how McCullin views his work.

‘McCullin has always avoided the term ‘art’ when discussing his work. Yet through careful, intuitive composition and framing he creates images that have a formal clarity and even an uncomfortable kind of beauty. The ethical dilemma involved in producing beauty from tragedy has been a concern in the field of photography almost from its inception. But McCullin hopes that his skilful composition helps these images stick in people’s minds. He attempts to make it impossible for us to ignore the atrocities taking place in the world in which we live‘.

All I could think was ‘Yes!’

Ninth, the book. We have a collection of show catalogues, going back over the years. But the McCullin version, edited by Aïcha Mehrez, did more than most to capture the exhibition’s presence than most. It included all of the quotes and contextual comments.

It is much more than a catalogue, and I would recommend it as a reference work on McCullin, for anyone that doesn’t have one.

We had seen the Van Gogh and Britain exhibition directly before this one (I might do a separate post). That audience was enthusiastic, picture-taking, noisy. 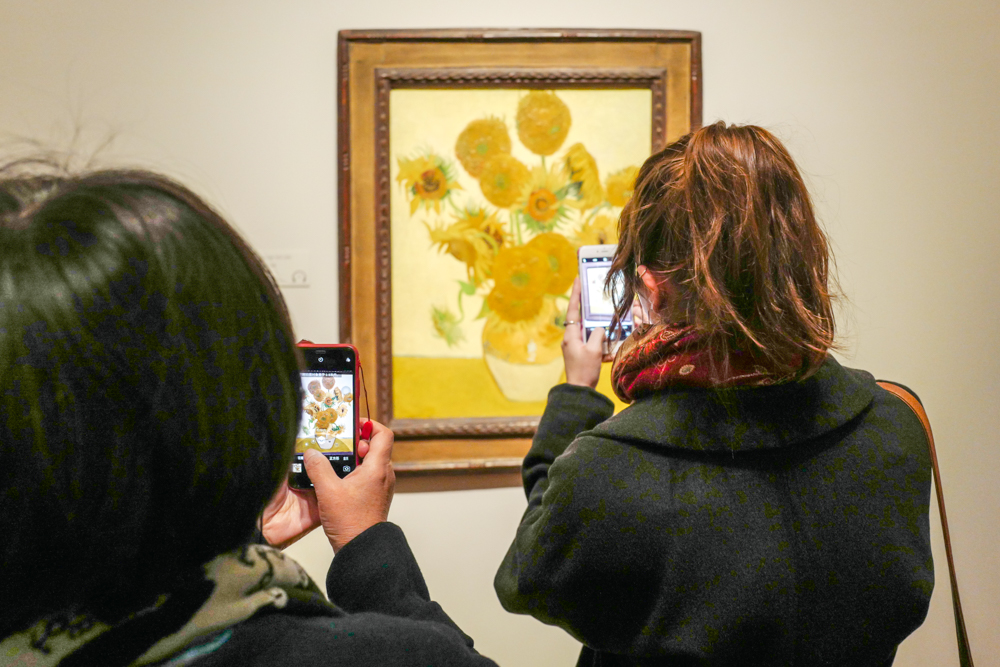 It was great to see such an enthusiastic response, and people were reading the assorted materials in the exhibition – essential, to actually understand the ‘British Connection’.

But the McCullin audience was almost reverential, there to study and learn, poring over the details and examining photographs at length. That in itself was an object lesson in how to craft a show, where the intent is to consider the serious issues of the day.

Even the detritus of McCullin’s life was being studied. 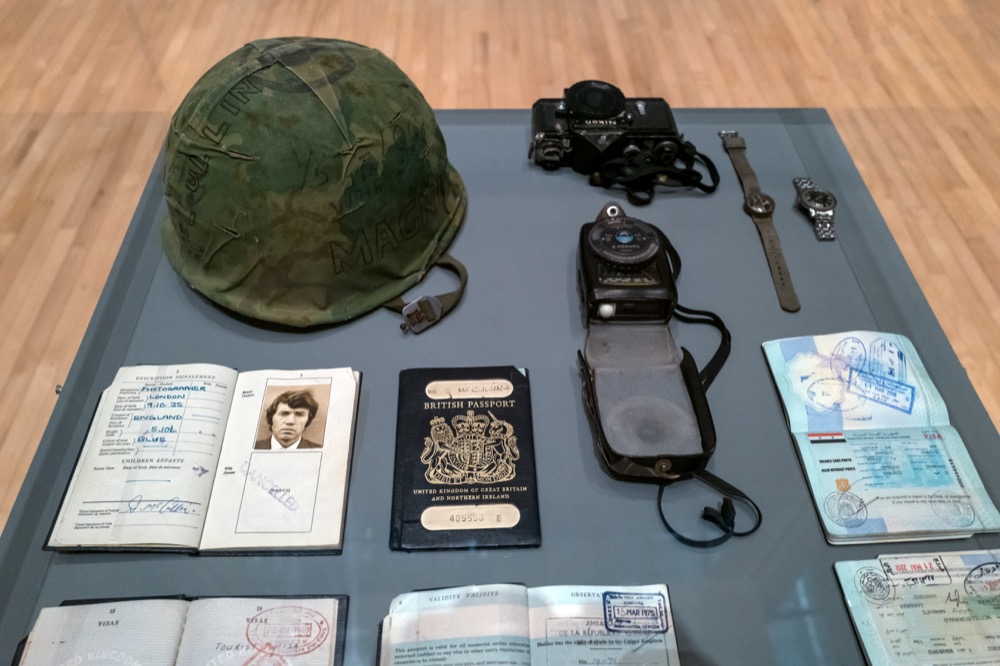 That is what I must strive for.