A while back I was asked to make a short presentation to the PhotoBath group on an image that has always inspired me. It didn’t take long to decide that it was Dorothea Lange‘s photograph taken during the Great Depression, in California (Nipomo), in 1936.

It is generally known as Migrant Mother. 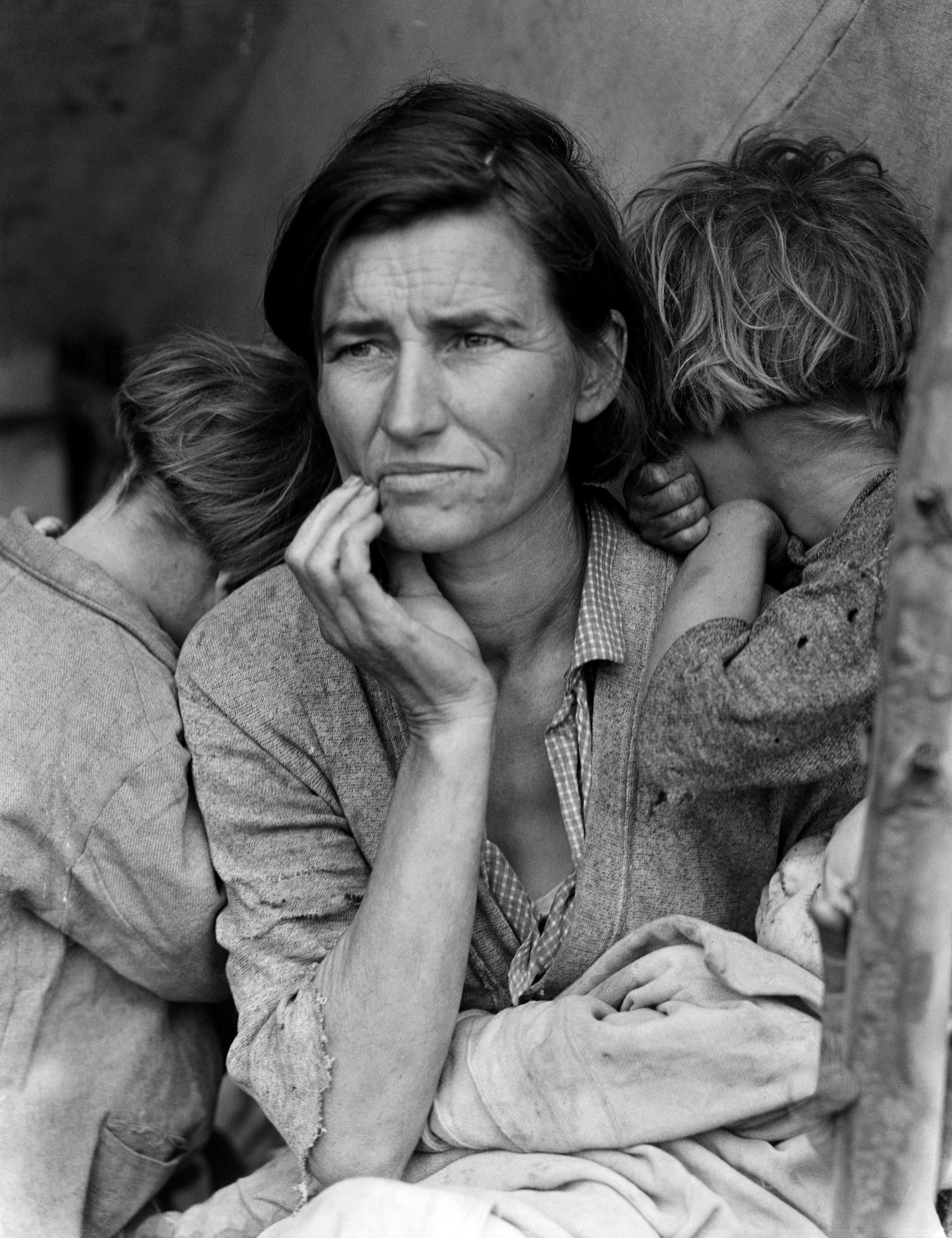 Dorothea was commissioned by the Farm Security Administration to document the impact of federal programs in improving rural conditions. It was a picture that literally changed history. That day, Dorothea took only seven images (originally thought to be only six – see below), using her Graflex series D 4×5 camera. Note, only seven images … how many would most of us take today? Also, at that time, she did not really take critical, documentary notes about her subjects, even forgetting how many photographs she took.

‘I made five exposures (sic), working closer and closer from the same direction. I did not ask her name or her history. She told me her age, that she was 32. She said that they had been living on frozen vegetables from the surrounding fields, and birds that the children killed. She had just sold the tires from her car to buy food. There she sat in that lean-to tent with her children huddled around her, and seemed to know that my pictures might help her, and so she helped me. There was a sort of equality about it’.

There are contradictory accounts here. In a 2014 PBS account for The Antiques Road Show, by Ben Phelan, it was noted:

‘In 1978, a reporter from the Modesto Bee found the Migrant Mother, tracking her down to a trailer park outside Modesto, California. Her name was Florence Owens Thompson; she was 75 years old. Lange had promised Thompson that her name would never be published — Thompson wanted to spare her children the embarrassment — but once she was discovered, she revealed her name and told her story.

Thompson was born Florence Leona Christie, a Cherokee, in a teepee in Indian Territory, Oklahoma, in 1903. She married at 17, then moved to California for farm- and millwork. When she was 28 years old and pregnant with her sixth child, her husband died of tuberculosis. Thereafter Thompson worked odd jobs of all kinds to keep her children fed. For most of the 1930s, she was an itinerant farmhand, picking whatever was in season’.

‘Lange had promised Thompson that her name would never be published — Thompson wanted to spare her children the embarrassment — but once she was discovered, she revealed her name and told her story’.

Lange herself said that she did not know Thompson’s name. Yet, in the PBS account, Phelan says:

‘Thompson was a model; she was posing, and she knew why. She was to represent the very Figure of Poverty. So she organized her posture and set her expression just so for Lange’s camera. And that is a talent, too. Thompson and Lange, for an instant in 1936, were collaborators‘.

I find that a bit of a stretch (see comments below from Susan Stein), but looking at the image one can understand the viewpoint. It is quite a sophisticated pose. Susan Meiselas and Wendy Ewald repeated Phelan’s ideas on pose in a Magnum Foundation seminar in 2017, as one of their bullet points on Collaboration:

‘3. Collaboration Precedes Iconization: For Dorothea Lange’s photo, Migrant Mother, Lange convinced Florence Owens Thompson to be photographed, to make her and others’ conditions known. Thompson posed herself as the figure of poverty, but never saw the picture until 1978′.

Frankly, I can find little other corroboration of this collaboration. Rather, it seems to me that Lange observed and listened, but did not actively collaborate. Geoffrey Dunn concluded that Lange had not taken her usual copious, documentary notes in this case (Photographic License, 2002).

I greatly admire and respect Meiselas and Ewald, but I do wonder if history is being re-written to favour the photographer?

‘After returning home, Lange alerted the editor of a San Francisco newspaper to the plight of the workers at the camp, presenting him with two of her photos. The editor informed federal authorities and published an article that included Lange’s images. As a result, the government rushed a shipment of 20,000 lbs. of food to the camp. The mother and her family had moved on by the time the food arrived.

The photo’s wider impact included influencing John Steinbeck in the writing of his novel The Grapes of Wrath’.

As she was funded by the federal government, the image was in the public domain and Dorothea never directly received any royalties although it ‘made’ her reputation as a photographer. The image was issued as a 32 cent U.S. stamp in 1998.

The mother’s name was only discovered in the 1970s. She was Florence Owens Thompson, mother at that time of seven children, and there is some evidence that she hadn’t expected the picture to be published. She never made a penny from the photograph, although she went on to build a much better life, and she died in 1980. Thompson confirmed  her side of the story to the Modesto Bee in 1978. 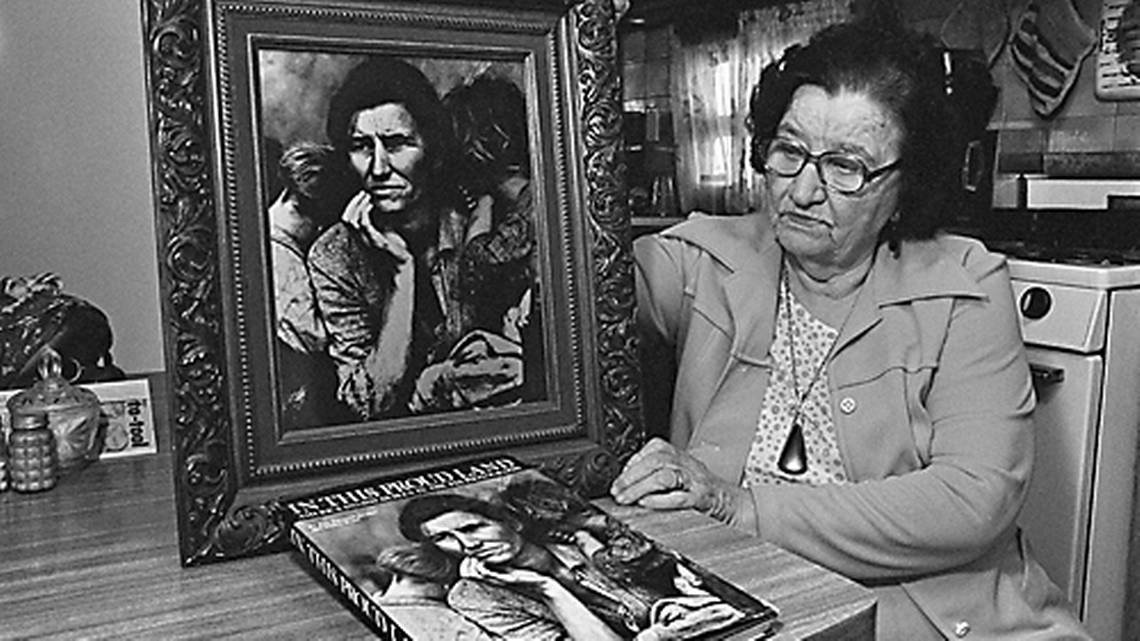 Florence Thompson is shown in Oct. 10, 1978, during an interview with Modesto Bee reporter Emmett Corrigan. Acting on a tip, Corrigan found her at Modesto Mobile Village. THE MODESTO BEE

Dorothea Lange had died in 1965, apparently without knowing Thompson’s name or history.

From an image perspective, there are a couple of very interesting points to note. First, the original image had the mother’s thumb showing in the bottom left, as shown by the original record held by the Farm Security Administration. This was retouched out, and that version became the picture that we all know.

Once you know this, you will for ever see the thumb, even in the modified image. Not an issue at all for me, but Photoshop ethics, anyone? I believe that this is acceptable, as the thumb doesn’t change the ‘story’ either way., making it more or less accurate, more or less believable. 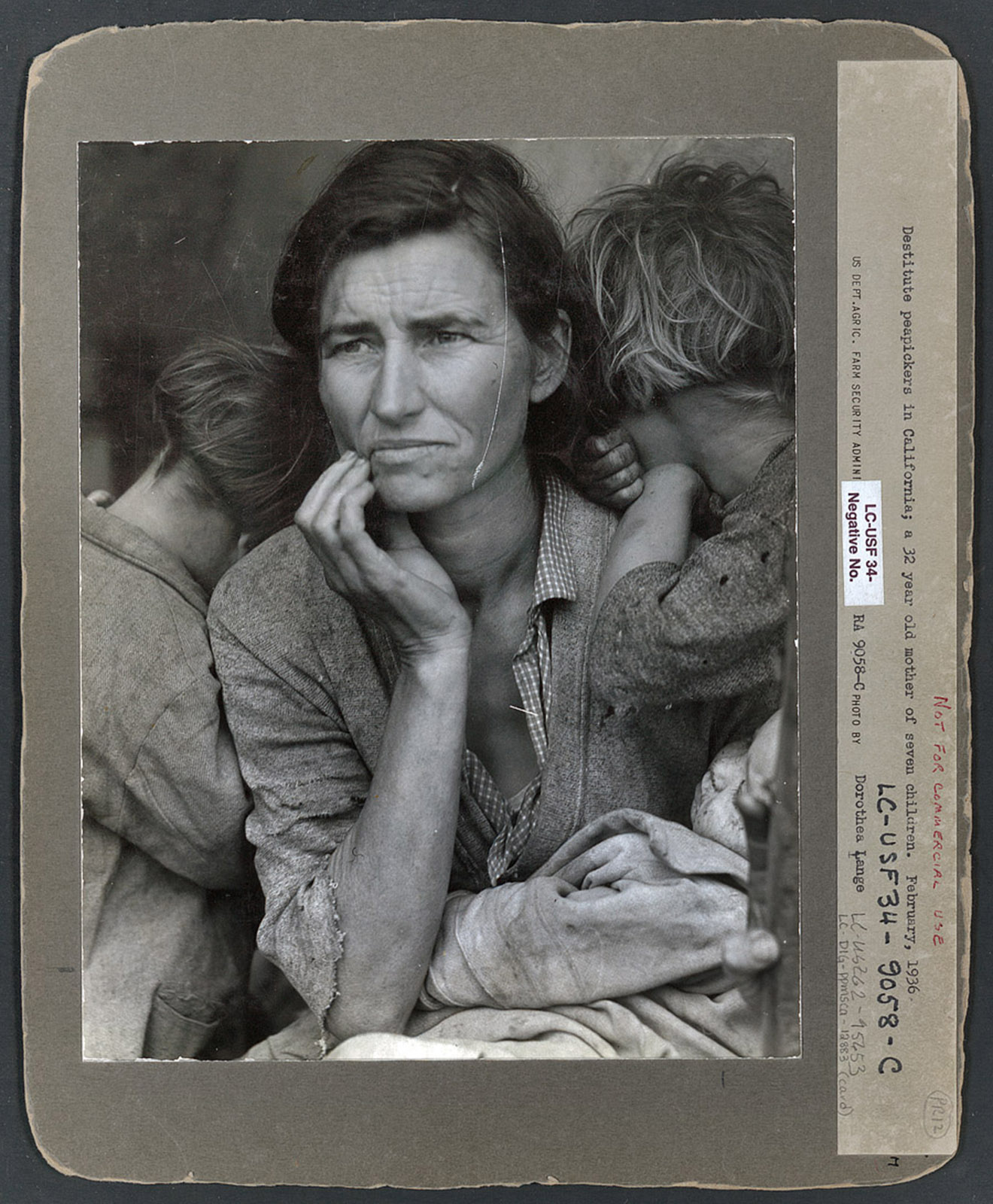 Secondly, the other frames taken by Dorothea had the children facing towards the photographer. She then asked the children to turn away, and the iconic image was born.

It could be argued that the result wasn’t really ‘documentary’, as the posing makes it a manufactured image.

Here are the other frames:

Until fairly recently, the normal record shows five frames taken before Migrant Mother, making six negatives in all. The sixth was only found after Lange’s death. A seven negative surfaced around twenty years ago, found by photo-historian Susan Stein. As it was something of a ‘blooper’ because of the child pulling a funny face (Stein’s words) it seems Lange discarded it. 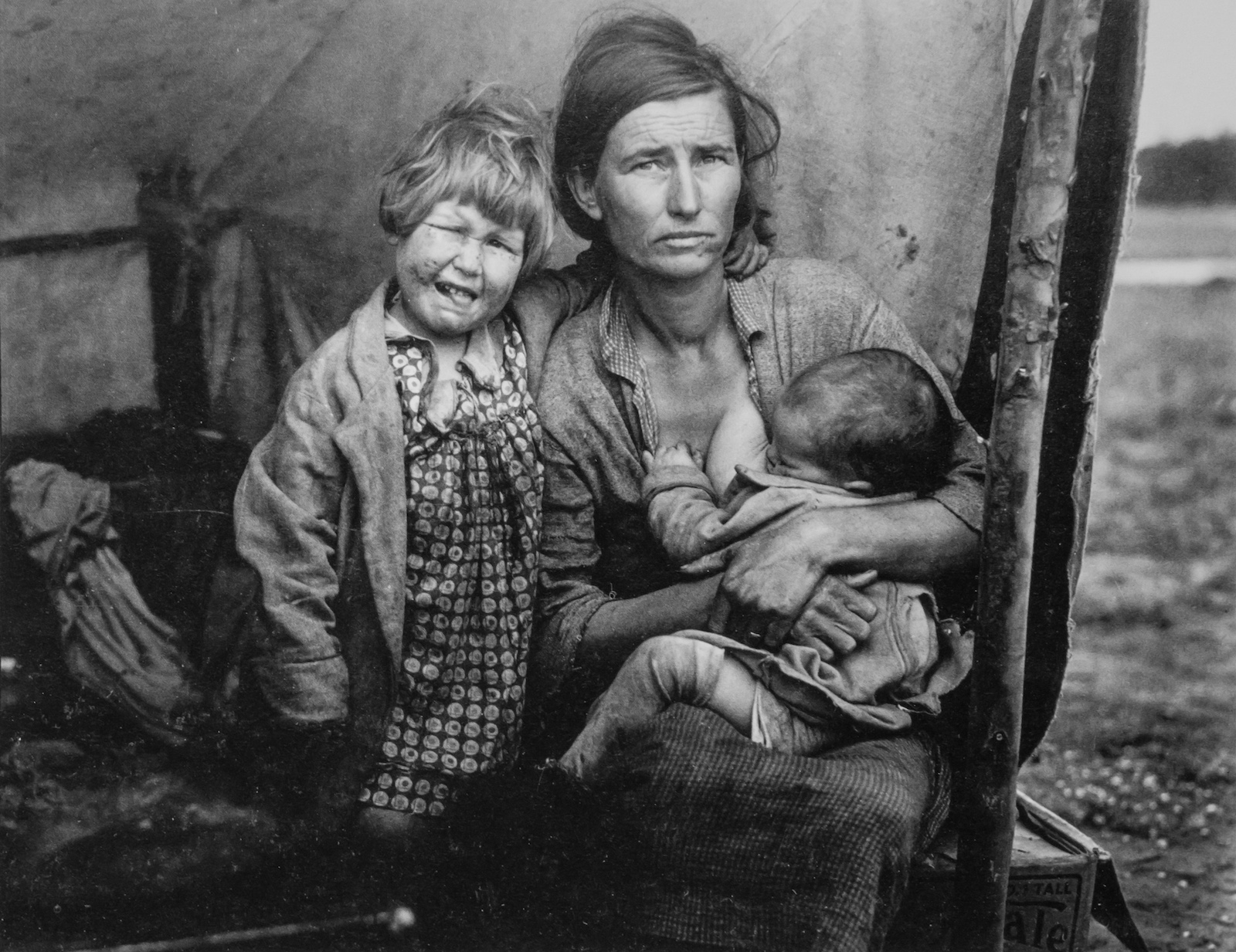 This ‘seventh image’ features in the major retrospective of Lange organised by The Barbican and Jeu De Plume, in 2018, The Politics of Seeing. Stein suggests this was the sequence of frames taken, leading up to Migrant Mother. Note, both that image and the last in Stein’s sequence are portrait format. 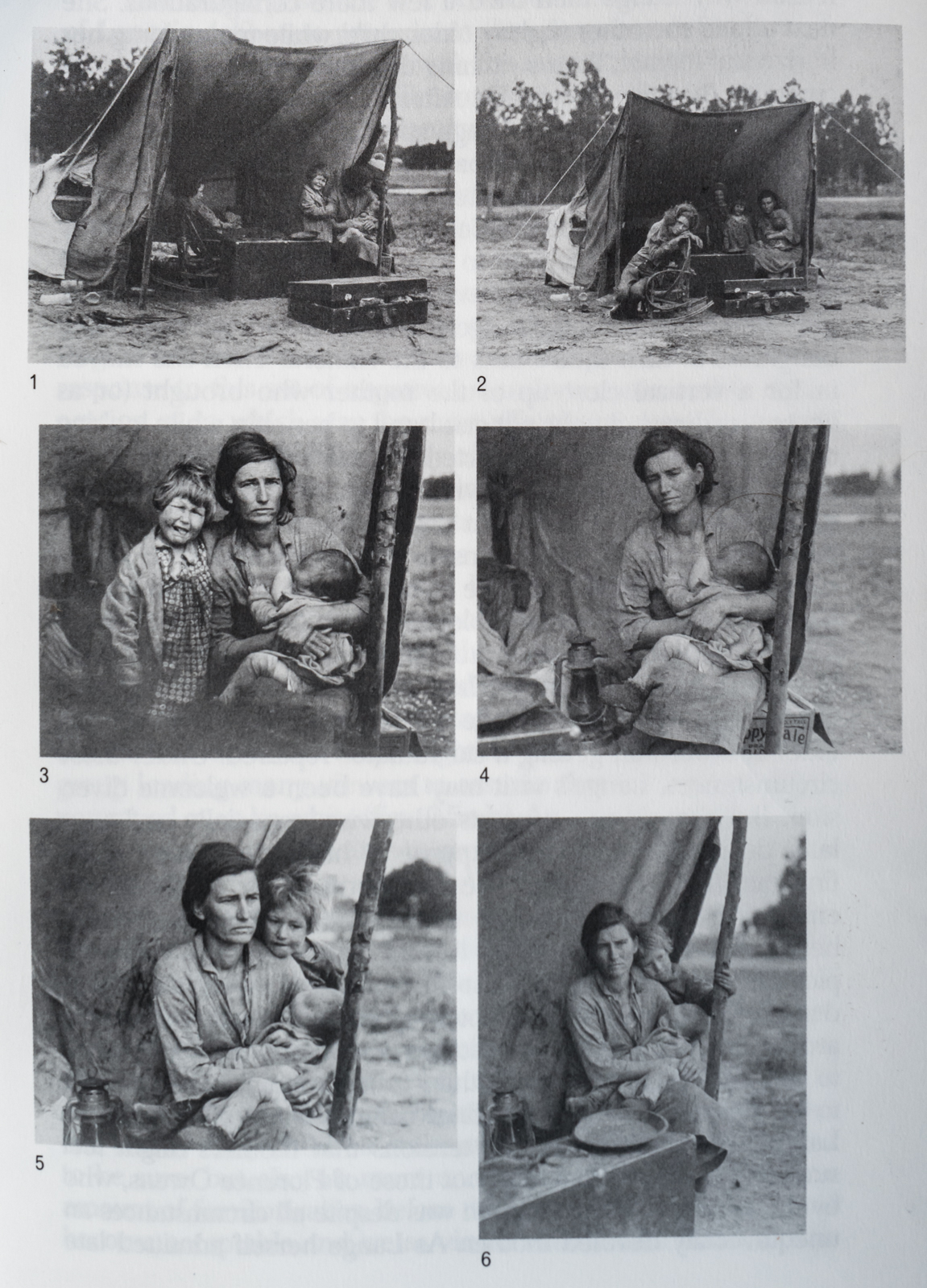 Whilst I am troubled by Lange’s lack of referencing notes, very surprising given her collaborative work with her sociologist husband, I am not particularly troubled by Lange’s final posing of the family, and her final choices. To me, this falls into the category of the artist’s vision of events. The essence of the massive problems faced by Florence and others really shone through because of the photographic intervention by Lange. Isn’t that what documentary is all about?

However I do believe that the work is moving across the fine line between documentary and propaganda. The FSA project was an example of Government propaganda, albeit well intentioned and fact based.

“Everything is propaganda for what you believe in, actually, isn’t it? I don’t see that it could be otherwise. The harder and the more deeply you believe in anything, the more in a sense you’re a propagandist. Conviction, propaganda, faith. I don’t know, I never have been able to come to the conclusion that that’s a bad word.

‘There is a difference between propaganda and an advocacy documentary that says what its subject and point of view are up front, and then explores issues surrounding the topic – whereas propaganda hides its true intent, inventing fictional realities while pretending to be non-fiction’.

Susan Stein’s fascinating book goes deep into the sequence of photographs and the interpretation of Migrant Mother itself. She make a strong case that, far from being an exemplar of motherhood, Lange’s image suggests a more nuanced, gender-referenced interpretation, including noting a rather awkward pose somewhat separating the mother from the children. Throughout her career, Lange also took many photographs of males with children, showing a caring father, and contrary to the prevailing stereotypes of ‘strong males’ and ‘caring females’.

Additionally, as Stein points out that, Lange was not aware of Thompson’s Cherokee heritage – in fact, the FSA was more interested in photographs of white people than either Native Americans or Blacks – setting Migrant Mother as the epitome of Euro-American culture is wrong. I thoroughly recommend Stein’s book as perhaps the most complete analysis of Migrant Mother so far published. It turns established wisdom about the image defining ‘maternity’ on its head.

To complete the history, there was an image taken of Dorothea with her camera, by Rondale Partridge, son of Imogen Cunningham.

Dorothea is holding her Graflex 4×5 single lens reflex camera. This camera took single sheet film, and the image is flipped upside-down and backward. When the photographer trips the lever, the lens stops down, the mirror goes up against the ground glass, the fabric shutter in front of the film slides up and allows the light to expose the film. The photographer then changes the film to the next sheet and sets up the next image. 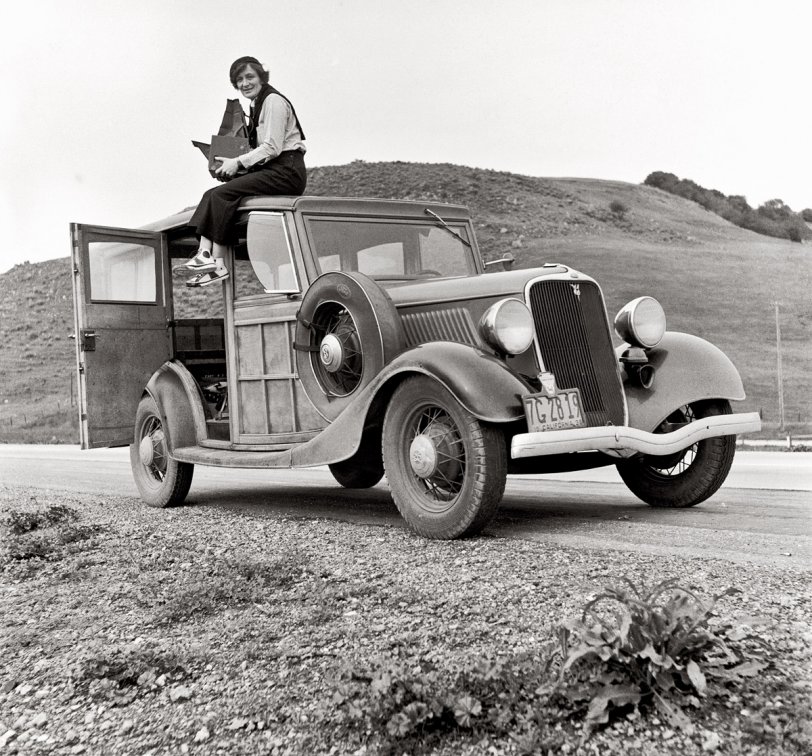 Adding a personal twist to the story, in 2000 Ingrid and I were starting our Cambodian school building program, and we visited the Khmer Rouge Reconciliation Areas (with Save the Children). These areas of the country had remained under Khmer Rouge control since 1979, with extremely limited schooling and very poor, subsistence living conditions.

Now, I do not want to claim to have any of the skills or vision of Ms. Lange, but I took this image. It was one of the families at Trapeang Prasat, and was shot with a Nikon D1 in 2000.

In retrospect, compositionally I should have tried to eliminate the people standing behind. The image was not posed, though I have always thought that a little of the mournfulness in the picture is in some way reflective of my long standing inspiration from Dorothea’s work. Perhaps I should have posed the image?

More importantly, on reflection my practice at that time was not sufficiently oriented to note taking and consent. Whilst I have met this lady a few times, subsequent to this photograph – and she has prospered – sadly I still do not know her name or those of her children. 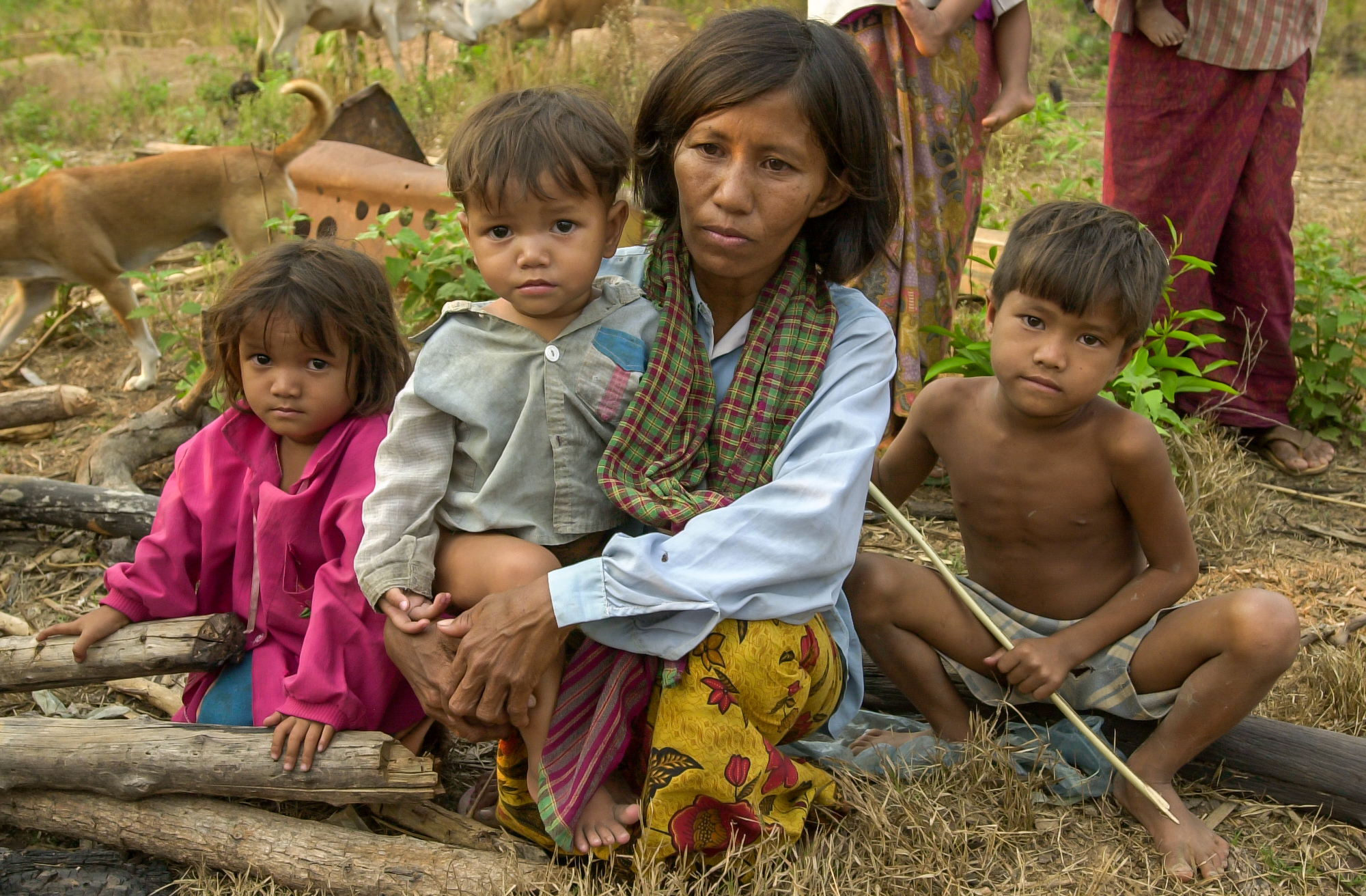 There is an excellent monograph on Dorothea Lange published in the Aperture Masters of Photography series.

And notes on the 2018 exhibition Politics of Seeing at the Barbican and Jeu de Paume are here.