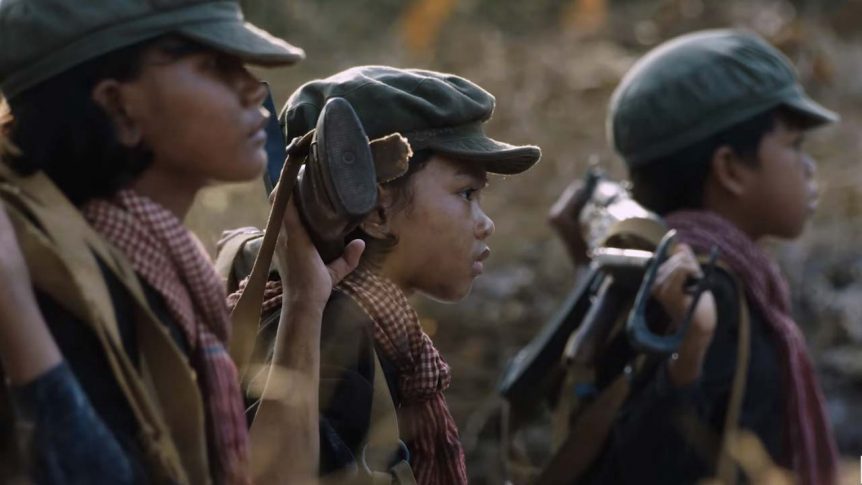 In 2017, the movie First They Killed My Father was released. It was directed by Angelina Jolie, and producers included the acclaimed Cambodian filmmaker, Rithy Pahn. It is based on thel book of the same name by Loung Ung, who was a child during the Khmer Rouge times.

The movie is available on Netflix.

One of seven children of a high-ranking government official, Loung Ung lived a privileged life in the Cambodian capital of Phnom Penh until the age of five. Then, in April 1975, Pol Pot’s Khmer Rouge army stormed into the city, forcing Ung’s family to flee and, eventually, to disperse. Loung was trained as a child soldier in a work camp for orphans, her siblings were sent to labor camps, and those who survived the horrors would not be reunited until the Khmer Rouge was destroyed.

I have noted elsewhere that I am shooting video to capture stories in my project, though in no way comparable with a Hollywood Movie.

My eventual work should be more in the style of Jan Krogsgaard & Thomas Weber Carlsen, Voices of Khmer Rouge. This installation consists of interviews with ex Khmer rouge members, capturing their recollections. It was included in an exhibition curated by Lukas Birk at Hong Kong University Museum, 2014.

In my case, video is a relatively small part of the envisaged likely final project, not the total focus of it. I do however find the techniques employed in Krogsgaard & Carlsen’s work really instructive, and will endeavour to create a more consistent (and holistic?)  approach to shooting video interviews on future working trips to Cambodia.

In any event, back to First They Killed My Father. This is not a ‘movie review’, though I had an email conversation with Cemre about this, last week. Some of the points I noted:

This is both a decent and frustrating film.

Very decent, in that Jolie really wants to tell the story with compassion, and (I believe) wants to bring the story to a broader audience, going beyond the ‘Killing Fields’ stereotype which seems to define Cambodia to most audiences across the world these days. The ‘dialogue free’ approach also rings true, as people became desperately afraid to admit anything to anyone.

But frustrating in two ways.

First, I find Loungs’s reaction to events a bit like an observer, not a participant. There’s a watch out for me in that. It is absolutely true that most survivors of KR times find it hard to express themselves emotionally, ‘after the fact’. But at the time, a young child would have been sweeping rapidly through so many conflicting emotions, I think, and yet Loung sails through the movie, at times with little passion.

And, second, the portrayal of the Cambodian countryside. Whilst it is very authentic (beautiful, even in accurate colours, despite what critics say about ‘supersaturation), it can come across a little bit too ‘Hollywood’ at times. It does this by focusing a lot on the landscape rather than the people in it, perhaps? Almost a cinematic parody of those difficult days, though fortunately no flowers or butterflies.

Nevertheless, one of the better films on the subject. Perhaps its downfall is that it’s still a ‘white guy observing’ movie, rather than something by Rithy Panh.

My comment on the countryside reflects my desire to portray the Cambodian context in my project more by implication than by direct ‘landscape’ representation. I think that there is a role for both. As I wrote recently, I want to find ways for an audience to have to consider what they are viewing, and ponder. I also need to beware of falling foul of a ‘Hollywood’ treatment, however well intended.

That means to continue to pursue ways to capture the emotion and intimacy in the story telling, without falling into some kind of glib or saccharine execution.

And, in setting the scene, experiment and eventually resolve where I am trying to balance ‘traces’ with my more traditional documentary imagery.

Exhibition. 2014. Refuse The Shadows Of The Past. Hong Kong University Museum. Available at: http://www.embassyofthearts.org/?portfolio=refuse-the-shadows-of-the-past-hong-kong-university-museum-2014. (Accessed 13/07/2018).