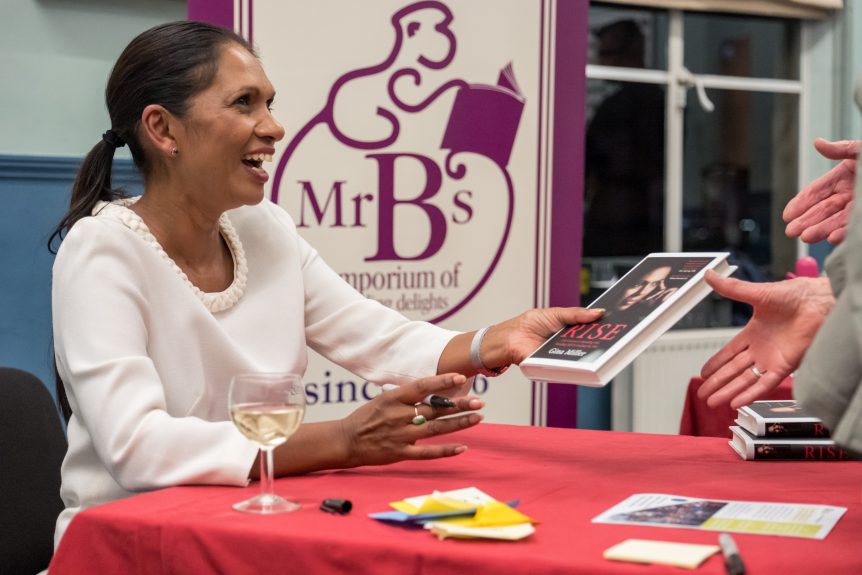 I was asked to shoot Gina Miller’s book signing this past week. Gina is the legal activist that took the UK Government to court, to ensure that Parliament has a say on Brexit – and won. As a result, she is both famous and vilified, depending on your viewpoint.

It was quite a difficult event to shoot, as the setting for her interview  was challenging (especially with background detritus). And a packed crowd meant space to move around was at a premium for the signing. Still, what does the event show about my practice?

Ingrid was there, and she made two broad comments. First, I fussed over the equipment more than I used to. And, second, I was much more likely to move people and things around to get better pictures – including Gina.

On the cameras, I noted elsewhere that I tend to use the same gear for such events, the Leica SL and a  couple of lenses, with M’s as second cameras. I do need to get a second SL, when the new version is released. I am very comfortable with the equipment, though as I almost always shoot available light my ‘fussing’ is in doing test shots on WB and ISO.

As to moving things around – yes, I do. Whilst I prefer environmental style work, you can only take too much detail around the subject. I have always been a rather ‘precise’ shooter on such events, but I am conscious now that I am quick to adjust the setting if needed, where I practically can.

There were a couple of other observations.

First, I positioned myself wrongly for the opening interview. I had an agreement with the sponsor to only shoot for the first 10 minutes of that session, and not move around. I guessed wrong where Gina would sit. Next time, either ask or intervene!

I still about made it work, but only just. Second, whilst I was there to ‘report’ the event for blogs and social media etc., I wanted to capture a bit more of her character than just report an event. Gina is a lovely lady – smart, intense but friendly and photogenic.

She gets horrendous attacks in the media – threatening rape and worse. That said, she was extraordinarily open, and very focused on hearing what people have to say. She also laughs and smiles a lot. If there is any kind of theme of her presence that night, it would be the good humour.

When I started to take some close-in shots of the book signing, she surprised me by saying she remembered me taking pictures at the London ‘People’s Vote’ march. A nice touch.

Here’s the gallery that was sent to clients.