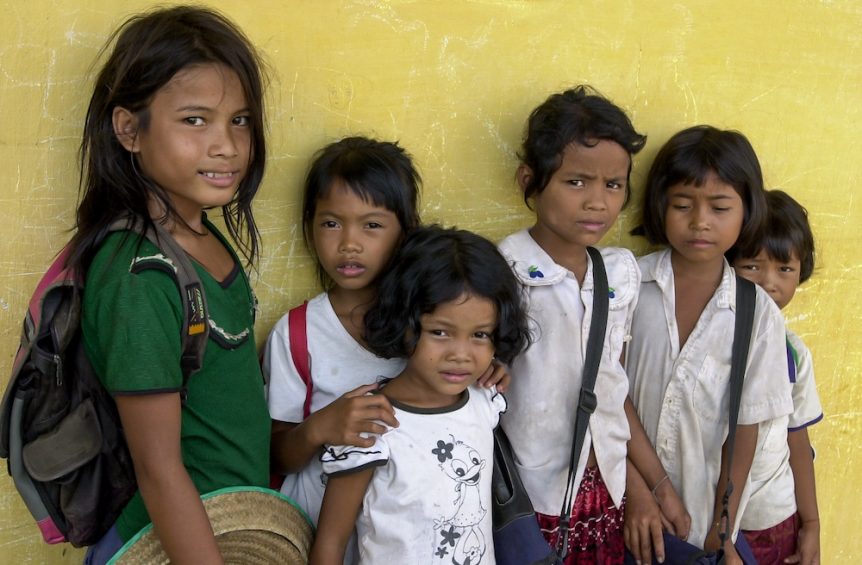 Partly because of some misguided feedback at the Falmouth F2F, and partly because I felt a need to ‘go back the beginning’ to explain my practice and my evolution as a photographer, this is something of a history piece – though hopefully clearly pointing to where I am going in my practice and the Cambodian project.

It’s probably also worth noting that the project hasn’t really changed since the beginning of the MA, although my photographic approach has evolved a great deal.

It was a sunny day, and the ruins of Angkor were majestic. Then we heard the distant rumbles. It was shellfire … Khmer Rouge against the Royal Cambodian Army.

The year was 1994, and the guns started our fascination with and love for Cambodia and its people.  We started to study the Genocide – what happened at Tuol Sleng, the torture centre in Phnom Penh, and Choeung Ek, the Killing Fields.

Ingrid and I have a deep personal belief that education is critical to development.

So, after Pol Pot died in 1998, we thus funded a primary school project, with teacher training and libraries, in the Khmer Rouge reconciliation areas. We met the local Khmer Rouge leadership, and our program, administered by Save the Children, gathered significant Cambodian and international support.

When it concluded, more than 130,000 children were affected. We also found ourselves networked and connected into several levels of Cambodian society.

As this MA project has progressed, our involvement has re-energized – including being asked to lead workshops for the Ministry of Education.

To critique my practice, I will go back to the beginning. I was a painter – particularly inspired by JMW Turner, with his energetic and sublime landscapes.

Wassily Kandinsky was another influence, with dynamic, pure abstractionism.

This led to a wide range of work, all rather reminiscent of those psychedelic times.

The1960s was also the time that photographers became media stars – and Don McCullin was high on that list. In fact, I used his photographs as a basis for some of my sketches.

My painting developed into a more formal, graphic style, though my intensity slowed down. Eventually I stopped, in favour of photography as my chosen art-form.

Yet, despite the experiments in my painting, my photography remained rather indexical.

For a while, I wanted to be a photo-journalist, but business life put paid to that.

Fortunately, my job took us all over the world. Travel photography was a staple.

I was not aware of the ‘colonial gaze’, though as I now look back at the work, I consider it respectful.

I have always been drawn to people, and their real stories.

And when I shoot street photography, I’m also looking for stories.

‘Above all, life for a photographer cannot be a matter of indifference, and it is important to see what is invisible to others’.

My photographic intent is to make a difference.

The MA project is ‘Unfinished Stories’ -Cambodians that we have known for two decades, who survived the Khmer Rouge Genocide. Their stories have never been heard.

There are two audiences for my photography.

First, in Cambodia, I want to contribute to opening up the discussion about this painful subject. I am deeply aware of the cathartic impact of the project on Sarath and my other friends.

And, second, internationally, I want to reach an audience who may have forgotten (or not even know) about the history and lessons of the Genocide.

I aim to put the stories of Sarath, family and friends into context with their positive, future-oriented dedication to Education. This is not, therefore, a ‘truth and reconciliation’ process.

It’s a multi-faceted project, with activities that will go on past the MA. Photography, text and video are all part of it, for future installations.

As noted, Don McCullin and other journalists have always been an inspiration for my work.

‘Seeing, looking at what others cannot bear to see is what my life is about’

And he also commented that he tried to take a compassionate, respectful view of his subjects, to give them a voice.

Still, unlike McCullin, I am not recording events as they happen. I am going back in time.

In researching aftermath, Sophie Ristelheuber has been instructive. She said:

‘I have these obsessions … with the deep mark, with the ruptured surface, with scars and traces, traces that human beings are leaving on the earth. It is not a comment on the environment … it is metaphysical’

Her work is engaging, almost poetic, though perhaps a little impersonal.

I MISSED MY MOTHER

In an earlier Work in Progress, I created metaphorical work, whilst still remaining focused on a specific story.

That story was Sarath’s walk through the jungle to see his Mother.

He left the Khmer Rouge camp overnight, afraid, escaping wolves. The effect is personal, and intriguing, but still rather literal and indexical.

A PRAYER FROM HELL

In further research, I noted Antony Cairns, who said:

‘I .. want to capture the atmosphere that I feel in these big cityscapes’

The feeling is powerful, and his solemn use of black and white adds to the mystery.

His work seems to illustrate Baudrillard’s point, that:

In my last Work in Progress, I used ‘digital negatives’, to not be ‘real’. I was seeking to intrigue, and show something that is present, but in an otherworldly way.

The aim was to get the audience to stop and think again about the Genocide.

The series was well received in Cambodia by local photographers and others. In fact, the title ‘Prayer from Hell’ came from Youk Chhang, the founder of the Documentary Centre of Cambodia.

A recent eye-opener was Judy Glickman Lauder’s mix of black and white, negatives and infrared. This was used in her work on the Danish exception to the Holocaust.

I love the eclectic and highly aesthetic process she employs.

‘In the darkroom, if the negative itself expressed more of what I was seeing and feeling, we created a print in which the light and darks were reversed’

Glickman Lauder’s infrared photographs punctuate the other types of image, without disconnecting the audience from the story.

The work is ghostly, eerie and has a melancholy sense of time.

Compare this with the garish, faux-colour, in Richard Mosse’s infrared photography.

Challenging work. But, unlike Mosse, and more like Glickman Lauder, I am seeking a quieter, more respectful and yet still impactful narrative, to do justice to deeply personal stories.

In the last year, I have met several Cambodian photographers, including the most influential working today, Mak Remissa.

‘The story of the genocide … has faded gradually away from people’s mind, like smoke being blown away by the wind’

In talking with Remissa, he noted that he used black cut-outs, the colour of the Khmer Rouge, and he saw congruence there with my work.

I have also re-looked at Paul Seawright’s Sectarian Murder.  He combined a present-day landscape with details of a past murder committed at that spot. His work:

Unlike Seawright, I want my photographs to convey a dichotomous sense of place or even non-place.

I am drawn to the idea that, in narrating one Genocide, we can point to them all, rather than illustrate specific geographies.

A PRAYER FROM HELL – TWO

In my latest Work in Progress, I am combining an infrared photograph with an actual quote from Sarath.

I want the image to engage with its implied meaning, yet not be literal. I want to pull the viewer from image to text, and back again.

I want to create beautiful images which only give up the horror of place when studied.

And I want the images to be self-contained images, to be installed large and presented impactfully. Yet, whilst each bears a personal story, the series creates a compelling narrative about Genocide.

As next steps, I am continuing to extend our Cambodian network into printing, marketing and galleries, as well as national documentary organisations and academia.

This year we will publish a book in Phnom Penh.

I am also discussing a future collaborative exhibition with local photographers.

The work is not yet finished, but I think I can now see a pathway.

Thank you for listening.