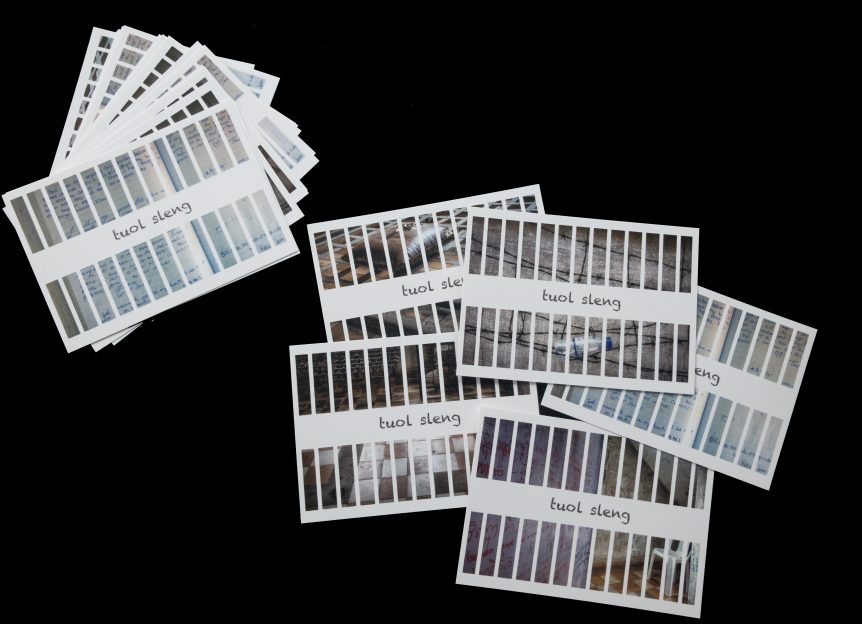 Just trying to pull together some ideas on a possible installation – not for August, as part of Landings, but looking to the future.

I envisage an immersive space. The main objective of the show is to tell personal stories, bringing these to some kind of public closure. At the same time, I want to help visitors understand the historical context, but in almost an interactive way.

So, as visitors enter, they will have their ‘mug shot’ taken (with their agreement) and then exhibited. This gives an opportunity to discuss the power of photographs to be judge and jury.

There are two, broad components of the installation. The Stories, exhibited in a rather traditional way, through using  mix of photographs, video and text. And the traces of genocide, exposed to visitors only when they enter ‘life size’ cells, in the shape of Tuol Sleng. Stories will dominate, only  limited number of small ‘exhibition cells’.

And there will be ‘take aways’ – possibly postcards that visitors can send to friends, with their comments. Overall, the problematics raised are important but I would be cautious about the ethics when involving members of the public. All of your critical references are important, however I would argue that taking “mugshots” of the public in this context would perhaps shift the focus of the narrative into other areas of photography.

Genocide is a very serious issue not to be taken lightly – especially if you have members of the public that have been directly affected one way or another.

I would advise to look at the works of Alfredo Jaar Rwanda, Rwanda as well as other works. Video here Images are not Innocent.

Also his most recent retrospective at the Yorkshire Sculpture Park The garden of good and evil.

Alfredo Jaar’s work involves archival footage but also a conceptual approach to how he re-works these images for presentation within the context of the gallery/museum space.

Of course I totally agree on the possible ethical issues. The mug shot idea would be totally inappropriate in Cambodia, where people still occasionally visit the museum looking for lost relatives, even after all this time.

What is, however, interesting to me is Michelle Caswell’s work (referenced in the link in my post), as it applies potentially to other audiences. The most profound point in the book (for me) was that the moment people were photographed, they were sentenced to death. The subsequent confession (and torture) was a bureaucratic not judicial act. The photograph literally signified your death.

It seems to me that is worthy of exploration, not least in a society where we are surveilled and photographed everywhere? To be clear, the mug shots are not of ‘the public’. I am not Gilden. They would be taken only with their permission, when they visit the installation/exhibition, and that would lead to a conversation (participation?) in what that signified.