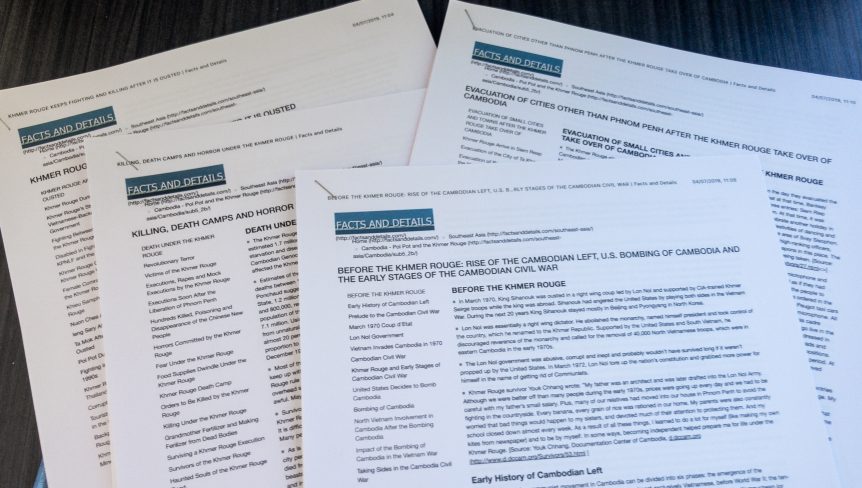 It is terrific when one find new sources of information on Cambodia and the Khmer Rouge, even though I am reasonably well acquainted with a lot of what is out there. One of the values is, of course, to confirm things.

Jeffrey Hays has run a website called Facts and Details for a long time. Jeff is an American teacher, based in the Hiroshima area of Japan. To quote his website:

‘When I started this project in the 1990s I used mostly print sources such as the New York Times, Washington Post, Los Angeles Times, Daily Yomiuri (a Japanese newspaper), The Times, National Geographic, Smithsonian magazine, The New Yorker, Time, Newsweek, U.S. News and World Report, The Guardian, Atlantic Monthly, Archeology magazine, Natural History magazine, news services used by these periodicals such Reuters, Associated Press and AFP, information from national tourist offices, tourist brochures I have picked up from places I have visited, Lonely Planet Guides, other travel guides, Compton’s Encyclopedia and various books and other publications.

Now in addition to sources listed above I use: 1) Google searches; 2) public domain sources found on the web such as those from the Library of Congress, CIA World Factbook, U.S. State Department and Project Gutenber; 3), blogs that have collections of articles; and 4) searches of news sources such as the Guardian and the New York Times. Books I have used have included ones about world religions, animals, funeral customs, marriage customs, eyewitness history accounts, the Encyclopedia of World Cultures, The Rough Guide to World Music, Paul Theroux travel books, Daniel Boorstin history books, regional customs and manners books by Nancy Braganti and Elizabeth Devine, The World Almanac, The Guinness Book of World Records, and art and history books for regions such as the Middle East, Southeast Asia and Europe. I try not use Wikipedia except when I am desperate as I find it annoying that Wikipedia is the primary source of information on so many things and I want to offer a different perspective in my site.

Most of the images come from Wikimedia Commons, which I really like. Sometimes I snatch pictures off the Internet and then e-mail the source and ask if it is okay to use or take them from academic sources and use them under the “fair use” policy. There have also been times when I have taken images from a tourist office or company and have used them with the understanding that they help promote the place or company the pictures are from and I don’t make any money from them’.

He is trying to cover literally every country in the world (!), and he updates things regularly. His posts on Cambodia are comprehensive, detailed and well-researched. I will be reading all of it, and I also plan to contact him to compare notes.

HAYS, Jeffrey, 2008. Before the Khmer Rouge: Rise of the Cambodian Left, US Bombing and the Early Stages of the Civil War. 2014 Revision. Available at: http://factsanddetails.com/southeast-asia/Cambodia/sub5_2b/entry-2848.html#chapter-8 (accessed 04/07/2019.

HAYS, Jeffrey, 2008. Evacuation of Cities other than Phnom Penh after the Khmer Rouge take over Cambodia. 2014 Revision. Available at:http://factsanddetails.com/southeast-asia/Cambodia/sub5_2b/entry-2853.html (accessed 04/07/2019).