The photograph in the header shows Óscar Alberto Martínez Ramírez, 26, and his 23 month old daughter Valeria, lying face down in shallow water on the Mexican border. Valeria has her arm draped around Óscar’s neck. The news reports say that he had crossed with his daughter, then went back to get his wife. Sadly Valeria went after him, and in the ensuing attempt at rescue, both drowned.

The photograph was taken by Julia Le Duc, a photojournalist for La Jornada in Matamoros, the Mexican city directly across the Rio Grande from Brownsville, Texas.

The image is drawing comparison with that of Aylan (Alan) Kurdi, taken by Nilüfer Demir in 2015. Alan drowned whilst trying to cross the Mediterranean to reach Europe. 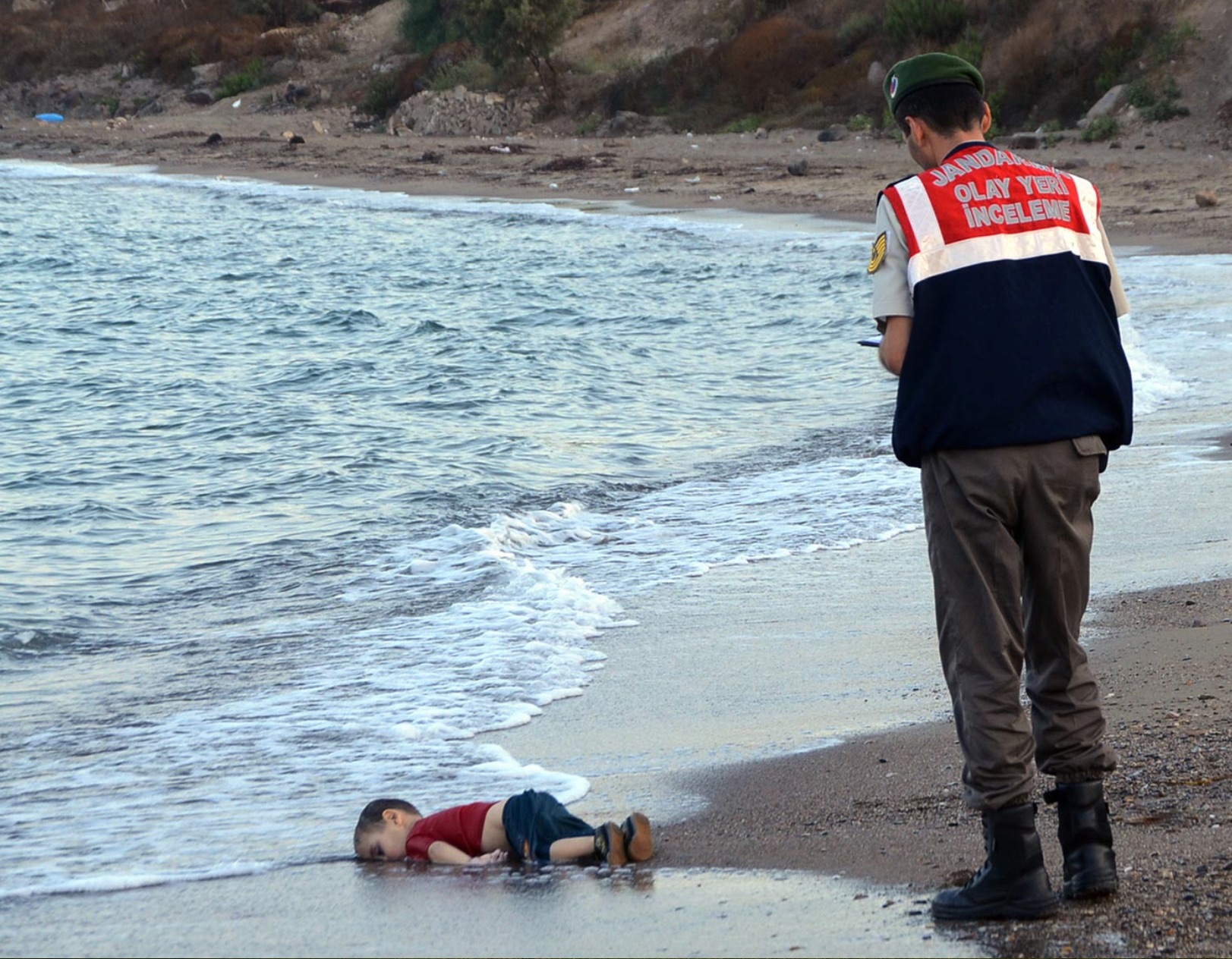 In a previous post on Demir’s photograph, I wrote:

[Demir]  felt a personal, ethical responsibility to take that image, and share it with the world. For a while, it seemed like it might change public perception about refugees. But the ongoing social rhetoric seemed to quite quickly cast this image to the past. In other words, the context of the image outweighed its intrinsic power.

There is of course considerable noise in the media about the latest sad news, though I think that my comment stands as correct for both images.

Let me use the ethics framework that I am developing, and see what that might reveal.

First, the photograph itself. LeDuc’s image appears to be without manipulation, is technically well constructed, and seems to be completely indexical. In other words, it is ‘just’ a photograph.

Second, the subject matter.  Any death raises questions about how to report it, but the death of a child is an issue of intense pain and scrutiny. It is hard to conceive this situation as anything other than hugely emotive, at both personal and societal levels. A strong case could be made that both the father and daughter have a right to privacy. Yet, what this image represents is also a matter of real public interest. The subject is not being presented in a sensationalist way, and the photographer is literally a reporter.

The journalist had both a right and responsibility to photograph the scene, as respectfully as humanely possible, as was done in both cases. The public has a right to see the photograph.

I would suggest that in this case the public interest outweighs the personal privacy rights.

Third, Genre. As a news photograph, there are many existing codes of conduct as to how this image should be accurate, not manipulated and so forth. I see no spacial issues.

Fourth, from a cultural perspective, we all have deep taboos about death and children. The portrayal of dead bodies predates photography, and persists in all cultures. There would not seem to be a particular cultural thread (Mexica, US, Global) which changes the way this rather indexical image could be viewed and interpreted. The exception could be that some (but not all) Muslim countries might not want to portray images of people. The Koran, however, provides no specific guidelines for the use of human imagery.

So, it would appear the issue is again one of personal privacy versus public interest, or media interpretation.

Fifth, place. There is no particular spiritual or cultural significance to the places where these photographs were taken. In fact, the banality of the places underscores the power of the meaning of both photographs.

Sixth, time. There is, of course, the question as to whether these photographs should have been taken and then shred in the first place. My view on that is absolutely, as noted in point two above.. The photographer is responsible for the ethics of taking an image – the audience for viewing (paraphrasing Martha Rosler and others). Again, there is no particular significance to the time these photographs were taken, except to underscore their sadly everyday nature.

Perhaps there is a more involved dimension as to how these photographs will stand the test of time, which leads to considerations of perception and change.

Seventh, in any program of change, there are ethical dimensions. To what extent can (or should) a photograph attempt to change the audience’s perceptions of what has transpired in the past and what should happen in future? And, to what extent was the image maker involved in creating work to motivate a change in attitudes?

The image itself does not offer up many clues as to LeDuc’s intentions, in being rather indexical. Research into the photographer’s views suggests that she has a been working on such issues for a while, and that therefore this is sadly just another image.

That said, even whilst the photograph is a factual news item reported after it happened, there are clues in the editorial coverage. This suggests how the media would like the public to perceive what happened.

After highlighting the personal, human tragedy, the The New York Times offered a slightly depersonalised summary.

‘The image represents a poignant distillation of the perilous journey migrants face on their passage north to the United States, and the tragic consequences that often go unseen in the loud and caustic debate over border policy‘

Whilst LeDuc, in La Jornada, was more direct about what caused the tragedy:

‘Tired of waiting in Matamoros, the time to request political asylum from the authorities of the United States, on Sunday afternoon, Óscar Alberto, his wife Tania and their little Valeria, decided to cross the river.

This Centromerican family is one of many who wander in the vicinity of the Puerta México crossing, waiting to be called, and present the request for political asylum to the government of Donald Trump’.

By contrast, the Fox News report had messages of warning for would-be migrants.

Jessica Vaughan, an official with the Center for Immigration Studies, said

‘Of course we should provide adequate care to migrants who come into our custody, but the real goal must be to end the policies that are encouraging people to make the dangerous choice of trying to come here illegally.

… we need to work with Mexico and the Central American countries to discourage the illegal migration, as the Trump administration has done, but we also need to negate the judge’s ruling that requires the government to keep releasing anyone who crosses with a child … so that people in their home countries see that this is no longer an option worth risking their lives for’.

The same image was thus ‘pitched’ to its audiences in subtly different, political ways. None seem to transcend an ethical boundary, and none lie. But all interpretations suited the narrative of the media outlet concerned.

Further quantitative research might be useful, comparing other stories across the same papers, longitudinally.

Eighth, ethics involves power relationships. Who holds the power in this image? Certainly not the victims, nor the photographer. Editorially, somewhat different approaches have been taken to the same basic facts (see point 4 above), but these are subtle and, depending on the viewer’s own political views, easy to accept.

The power relationships in this case seem to reside more in to what extent the politicians take differing views on the immigration issues – and how do they ‘exploit’ the death of innocents in future.

As noted, Fox News led with the ‘migrant’ story, and risks:

‘A harrowing image of an El Salvadoran migrant and his 2-year-old daughter lying face down on the banks of the Rio Grande River after drowning is highlighting the risks that those face while trying to enter America’.

On the other hand, Kamala Harris, US Presidential Candidate, tweeted about families and conscience, interestingly reported in the same Fox New article.

‘These families seeking asylum are often fleeing extreme violence. And what happens when they arrive? Trump says, ‘Go back to where you came from.’ That is inhumane. Children are dying. This is a stain on our moral conscience‘.

And a Guardian headline reads:

Perhaps the most extreme so far is George Osborne and the Evening Standard. 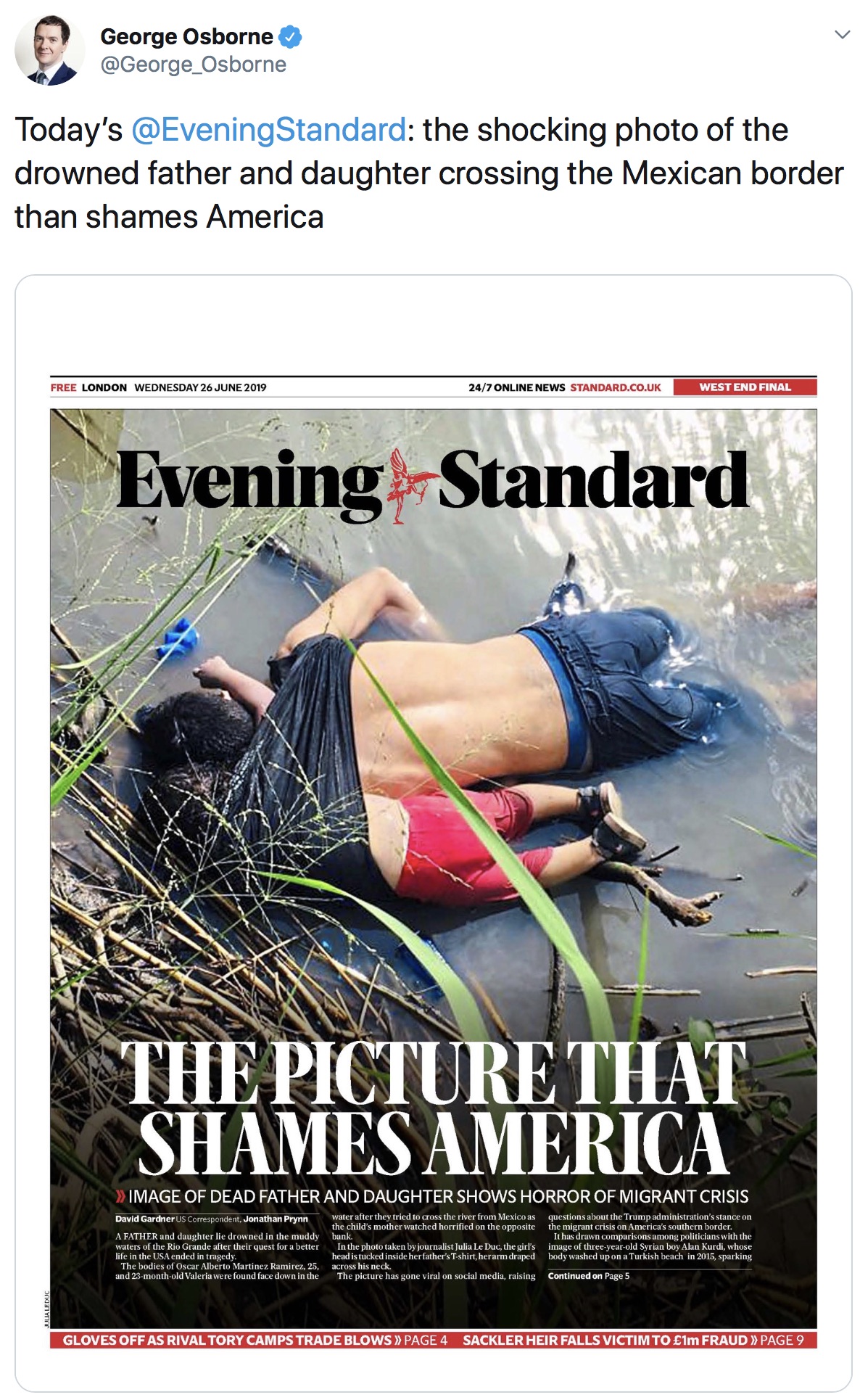 That would be a ‘wow’. Journalistic hyperbole at its worst. Blaming ‘America’ is a catch-all phrase, and smacks of ‘the other’. To those US citizens who object to the current Administration’s policies, it is an undeserved insult. And where was Osborne during the Mediterranean refugee crisis? This smacks a little of both opportunism and hypocrisy – and a misuse of the original work by LeDuc.

Yet, when one just pauses, isn’t it simply just reinforcing established views – ranging from immigrants to Donald Trump?

Nick Ut’s image of Kim Phuc dramatically reinforced  public opinion against US involvement in South East Asia, to the point that Nixon was concerned that the image was faked.

But, so far in this case, it seems to be reinforcing existing perceptions. Sadly this might become a case of time diminishing the issue, rather than pushing  change, just as in the case of the photograph of Alan Kurdi.

Ninth, today’s networks amplify concerns. The photograph has ‘gone viral’, just like the photograph of Alan. This seems an inescapable fact of life today. What would be interesting would be to measure ‘vitality’ – speed, reach, re-purposing and so forth.

Tenth, individual versus organisational concerns. It seems to me that the photographer, in taking this image, was acting in a fully autonomous capacity. And the  image, whilst having impact on many institutions as detailed elsewhere in this blog, was taken in witness to the terrible and avoidable deaths of the father and sun. A single, autonomous photographer was witnessing a terrible personal tragedy.

Eleventh, there are multiple roles in any photographic activity.  Across the world, how the drownings actually occurred was presented in slightly different editorial ways.

‘First, Óscar Alberto took Valeria in his arms and managed to cross the Rio Grande. He left the child on dry land and returned swimming for his wife; in an instant, she realized that the youngest, when she was alone, had thrown herself into the water, so she immediately returned and grabbed her but the current dragged them and ended up submerging them in Tania’s presence’.

The summary includes lots of ‘action’ and personal language. The Guardian reported what LeDuc said, although with less dramatic words. The copy editor at work, perhaps?

‘He crossed first with the little girl and he left her on the American side. Then he turned back to get his wife, but the girl went into the water after him. When he went to save her, the current took them both’.

‘As Mr. Martínez approached the opposite bank, carrying Valeria, Ms. Ávalos could see he was tiring in the rough water. She decided to swim back to the Mexican bank‘.

We get a small sense of the editorial stances of the papers, reflecting in their editor’s work.

Twelfth, the law. As far as I can tell, the photograph raises no direct, legal issues anywhere.

I will persevere with developing the framework, and using case studies to test it against.