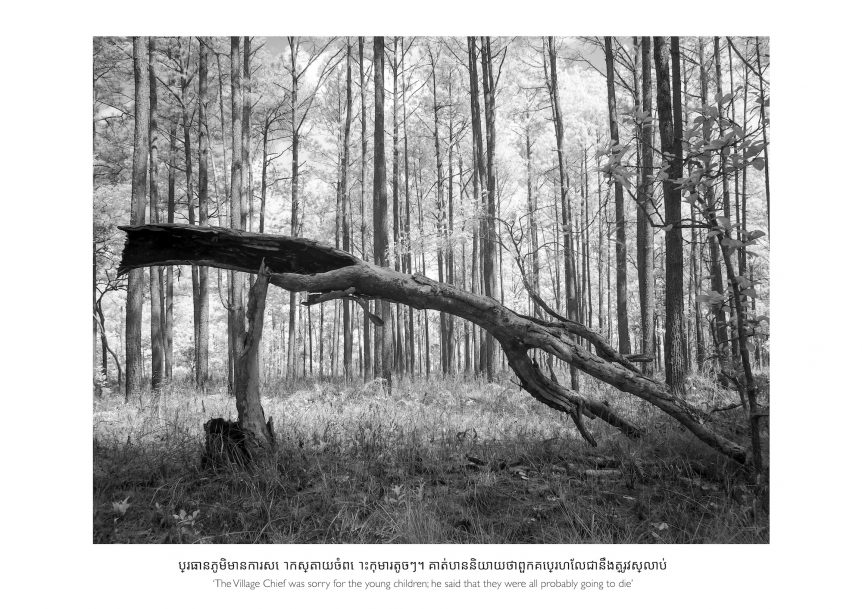 Thanks to input from both Gem and Richard Young (a fellow member of the PhotoBath collective), I think I had a bit of a breakthrough on the exhibition images. That is, to use Khmer text for the quotes, with a small English translation underneath.

I believe that this makes the image intrinsically more interesting (maybe Barthes ‘punctum’ for some viewers?). It also more clearly anchors the place to Cambodia.

I shared the idea with Paul, Krishna and the Cromarty group – and got a favourable response. Danny went so far as to comment that:

I think it looks good and hold full respect for the people and subject matter. It stands out because an imperial or colonial way of acting would not put the local language first in the case of work shown at home. It’s very respectful, and I like it a lot.

Paul suggested a book by Hannah Darabi which explored the use of photographs, text and slogans during the Iranian revolution. It’s on order!

I have asked Sarath to help me with accurate translations into Khmer.

For reference, here are the quotes that I have included in the book, and a  few extra that I used earlier in WIP. A subset of these will be used in the exhibition at BRLSI in December.

I will be explored different layouts and use of text over the next couple of weeks.

I have already downloaded the same font (Khmer OS) that Sarath uses to be sure I get an accurate representation of his translation. Early exploration using the UK Mac OS had errors.