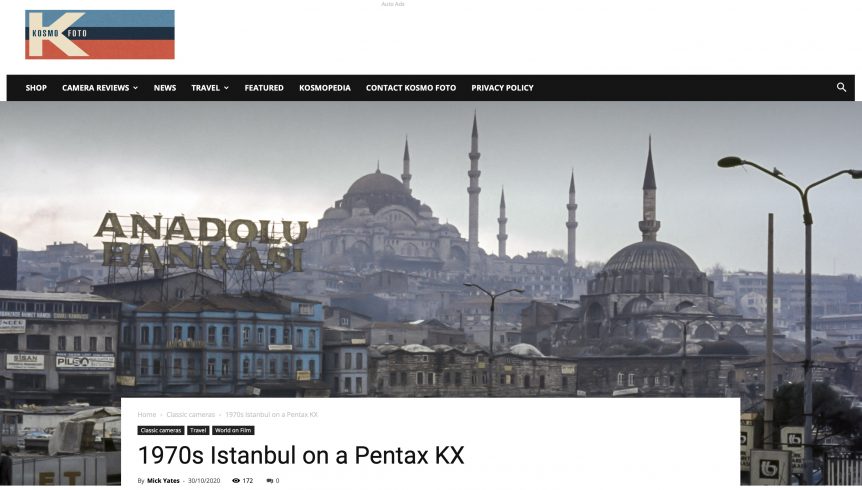 Stephen Dowling, who runs Kosmo Foto, a site dedicated to all things analogue (and a boutique film brand) saw my 1977 Istanbul pictures. He asked if I would do a write up, telling the story of the photos and my thoughts on the Pentax KX. I also wrote about how historical photographs take on new meanings.

This has just been published.

Here is my article. 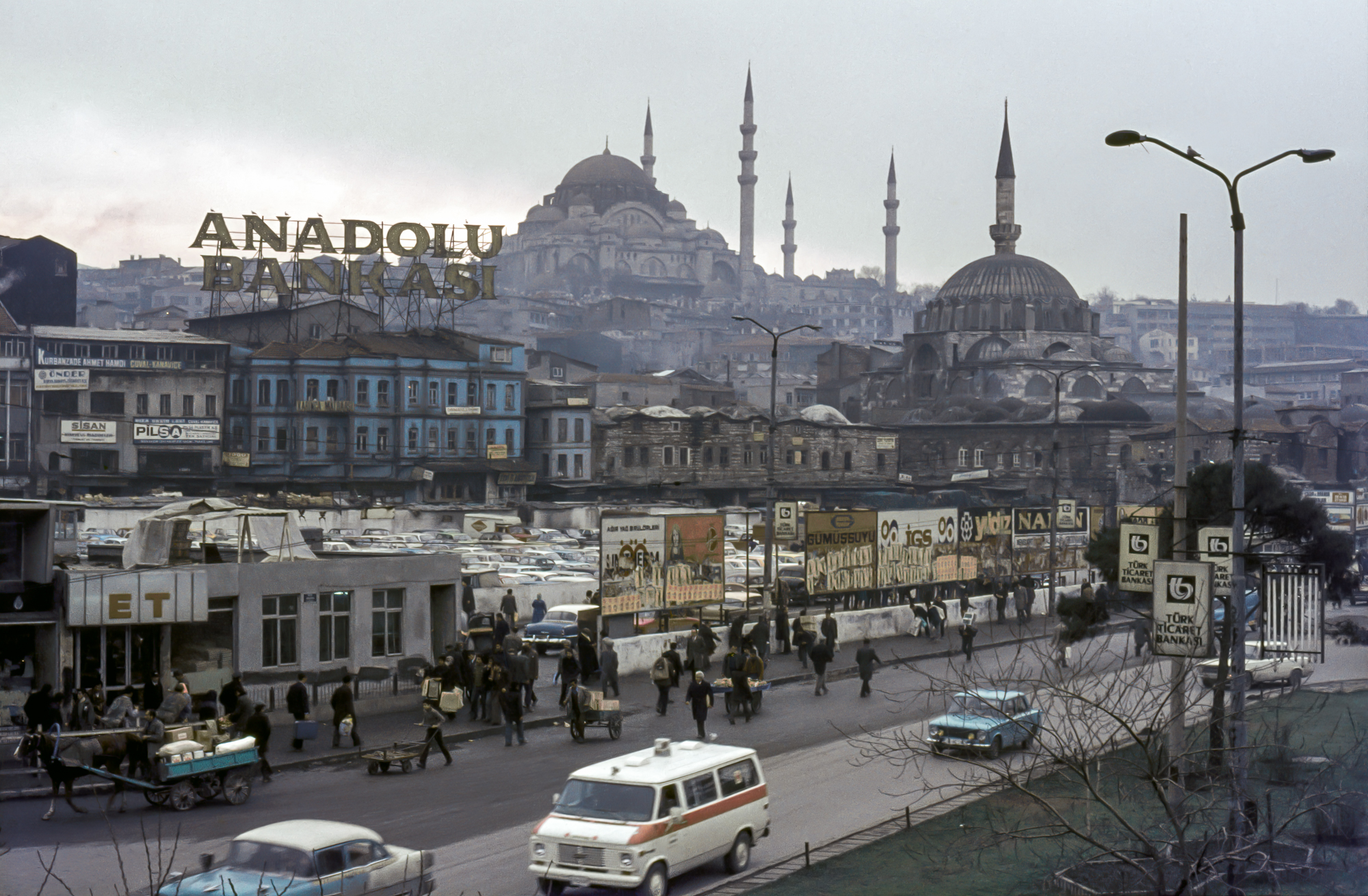 The Romantic Streets of Istanbul

We have been lucky to live and work across the world for many years, but there is always a first time for everything. Istanbul was one of those most memorable first times.

January 1977 was my first trip to that fascinating city – something repeated many times since. Geography situates the city at the crossroads of Asia and Europe. History defines it as one of the world’s oldest and most important cities. The city has seen it all, and it is a heady mix of cultures and religions, the old and the new.

Whilst the mosques, museums and bazaars are memorable, it was the people that intrigued me the most. Life was everywhere on the streets.

I started taking photography seriously in my teens, although my budget limited choices of cameras and destinations. In 1976, I moved from a Praktica LTL to a Pentax KX. The camera became my go-to for almost a decade, and I still use it occasionally. The Pentax 55mm F/1.8 is one of my favourite lenses. Pentax pioneered multi-coated lenses, and the 55mm is sharp, has great contrast, nice bokeh and lovely colour rendition.

January in Istanbul was chilly and rather grey, but that added to the mood. We visited all the usual tourist spots, although I think I made better images on subsequent trips.

Istanbul is a fabulous city to walk, and the ferry trips zig zagging across the Bosporus are a must. Every street corner opens up a new vista, and a new encounter. The city seems to be making a point of showcasing its intense yet very human history.

Life was lived on the streets, with a market or street vendor everywhere.

These days I occasionally do academic lectures on photography and club talks. I recently completed a master’s degree in photography, and I find the history and the analysis of the craft almost as interesting as picture making itself. Several things strike me when I go back and look at my old work.

First, I am amazed at how few photographs I took. Today we are used to the almost infinite possibilities of digital, and the cost of ‘one more image’ is zero. But with film, every shot had a cost. Occasionally there might be a couple of alternate views of something important, but each street photograph was unique.

Secondly, we tried hard to get the picture ‘right’ in the camera. I usually shoot colour, and invariably used slide film. In Istanbul I had Agfa CT 21 which at 100 ISO is still quite tricky to use in poor light. ‘Get the highlights right, frame the photograph properly, and fingers crossed on the shadows’ was the mantra. The KX has a very accurate and easy to use match-needle light metering system, building on the Spotmatic’s breakthrough of being the first to offer TTL metering. When I process these images today for digital use I very rarely crop, and if I do, I maintain the original 36 x 24 format. The discipline of slides helps my digital photography, too.

Thirdly, as a tourist, one is conscious of being an ‘outsider’, an observer, influenced equally by lavishly coloured guidebooks and their perfect photographs, and the personal need to take snapshots of everything. Most tourists take photos of local people either as part of a broader scene, or to get some local colour. Yet we might not do something similar on the streets of our hometown. Are we being shy or unnecessarily fearing recrimination? What chip in our head changes when we become tourists?

And, fourthly, time changes how we see images.

Like most photographers, I had to learn how to really ‘see’ the subject in the viewfinder and not just make a rapid snapshot. Owning the Pentax was the first time that I thought that I had graduated to the big league. It was (and is) a serious camera. So, I wanted more than snapshots, and strove to create something more lasting. In many ways Istanbul was the beginning of my desire to find and tell stories.

Slides lent themselves extremely well to this task, as home-projection and sharing with family naturally meant some kind of thoughtful sequencing was needed. Slide shows are virtual photobooks.

But time also changes the way that viewers see images. The photographs move from being a personal record of a fleeting encounter to having historic, documentary value which is worthy of study. A photograph increases in meaning over time.

I use social media a lot to share my work, hence Stephen’s invitation to write this article. On Facebook, a few people referenced Ara Güler’s brilliant photographs of Istanbul. He spent a lifetime walking the streets of the city, and created an intense, romantic yet ultimately sympathetic view of the city and its people.

I have long held the view that whilst we have cultural differences across the world, people are people. We have much in common. I want my photographs to tell some kind of ‘truth’, yet I also try to portray people in a respectful way. I want my images to stand up as strong compositions, and I see no paradox between aiming for good aesthetics and documentary imagery. In looking at my Istanbul series, I think I began to achieve that.

Both the number of likes and the comments on social media reflect audience interest. It is not just about creating some superficial composition with dramatic lighting or colour – people get attracted to what a photograph actually means. What is going on in the photograph? How have things changed? As I go back through my archives, I see many new details or actions that I either had forgotten about or not even noticed at the time. And I find photographs that I had discarded yet now find interesting.

As I mentioned, I have been a photographer my entire life, and am blessed that I still have all of the slides, negatives and prints amassed over 50 years. I am working my way through digitising that archive, in a methodical and frankly rather time-consuming fashion.

Agfa CT 18 and CT 21 produced lovely neutral colours, with sometimes a slightly ‘cool’ feeling despite intense reds, which I liked. Sadly, today some of the original material has either slightly faded or developed a purplish cast. Modern software can deal with these problems, and I am at pains to keep the final colours as natural as possible. Trial and error have led me to a workflow that fits my needs.

The Istanbul light that January was quite dull, and some of the photographs have a monochrome tonality. Yet many are pierced with vibrant splashes of colour.

To me this sums-up Istanbul.

It is a human, vibrant city whose mood changes constantly with the shifting light. Above all, Istanbul is a romantic city with a welcoming heart for photographers. It always was, and always will be one of my favourite cities.