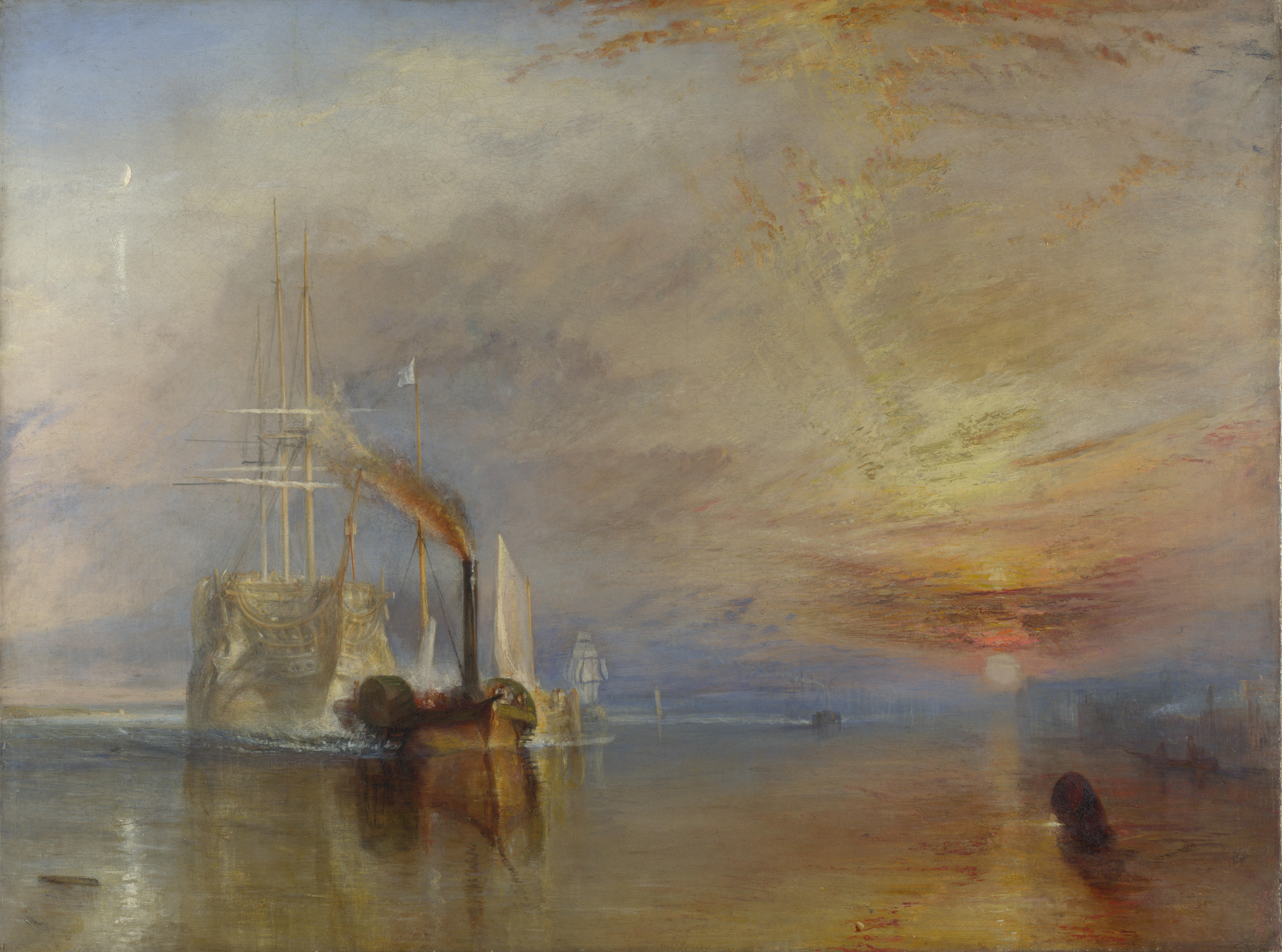 I have been studying the materials for Positions and Practices, and was quite taken with the chapter on Territorial Photography by Joel Snyder, in the book Landscape and Power by WJT Mitchell. Landscape is not really the centre of my practice, though I am always attracted to the genre, which probably goes back to my painting days, and studying art in the 1960s.

The header above, JMW Turner‘s (1775-1851) Fighting Temeraire (1839), was always a painting that inspired me, as did all of Turner’s work. Most of his later paintings can be considered “sublime”, and in many ways I consider his art a precursor of expressionism. This particular painting was voted ‘Britain’s Favourite’ in 2005. I find it fascinating that Turner actually created this scene – in reality, the sunset should have been geographically behind the artist.

‘It shows the veteran of the Battle of Trafalgar being towed up the Thames by a steam tug on its way to the scrap yard. The painter had used considerable artistic license to show the ship travelling east so he could include a spectacular setting sun.

But while Turner strove to evoke a sense of loss for these old sailing war dogs, the painter had also sought to capture the dawn of a new steam-powered era.’ (2013).

Turner, alongside Constable, were chroniclers of the impact of the Industrial revolution, each from their own perspective and artistic style. Constable is a natural precursor to the impressionist, modernist movement, painting ‘what is there’.

Turner, on the other hand, painted ‘what could be there’, with enough reference to reality to persuade the audience of the ‘truth’ of what they were seeing.

I am especially drawn to Turner by the power and energy in his work, capturing an age. He portrayed that age, yet, more importantly, suggested its possibilities. One of his works, Rain, Steam and Speed exemplifies this. It goes far in its abstraction, whilst it is still seemingly true to the shape of the landscape. “The passion caused by the great and sublime in nature is astonishment, and astonishment is that state of the soul in which all its motions are suspended, with some degree of horror. The mind is so entirely filled with its object that it cannot entertain any other, nor reason on that object which fills it. Astonishment is the effect of the sublime in its highest degree … No passion so effectually robs the mind of all its power of acting and reasoning as terror; and whatever is terrible with regard to sight, is sublime”. (1757, Part II, Section I).

By contrast, John Constable‘s (1776-1837) equally famous Haywain is, in my opinion, a superb exemplar of Beautiful-Picturesque painting.

Constable made several open air sketches of the scene, and then created the painting in his London studio. As noted above, his work is that of an early Impressionist. Turner and Constable were of course ‘artistic rivals’, battling for honours at the Royal Academy.

If I place these artists in the context of my photography, I am indexical, in the Constable sense.

My early artwork, however, was far from indexical. Pop, yet expressionist – a blend of styles. And I was conscious at the time of being very much under Turner’s influence. 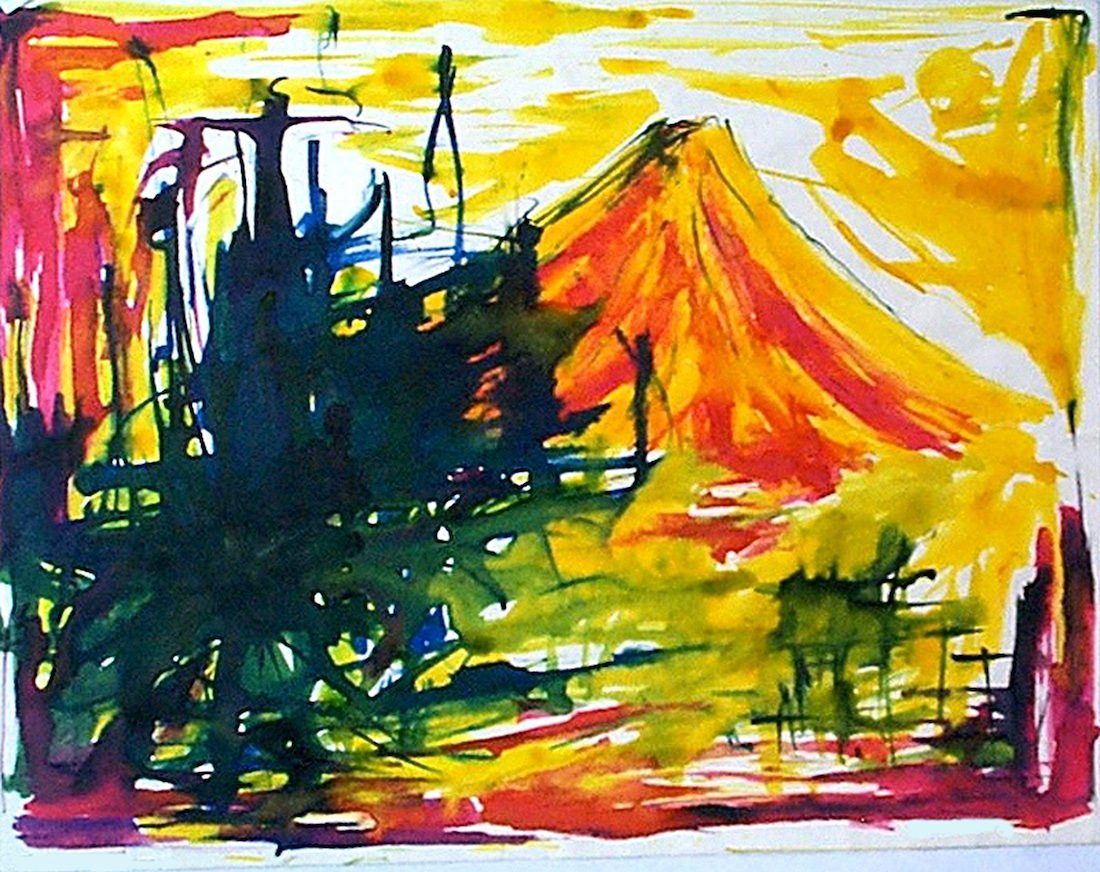 Perhaps I need to explore that apparent contradiction in my photography in the MA?

Somewhat before Turner and Constable, an early theorist, Sir Uvedale Price (1747-1829) placed the picturesque between the serenely beautiful and the awe-inspiring sublime (from An Essay on the Picturesque: As Compared with the Sublime and the Beautiful, Robson, 1796).

Immanuel Kant (1724-1804) in the Critique of Judgment (Part I, Critique of Aesthetic Judgment, 1790) took Burke’s concept further. He noted that the viewer projects beauty onto natural objects, and that experiences of beauty create universal feelings of delight. Beautiful objects need no underlying concept.

‘The beautiful and the sublime are similar in some respects. We like both for their own sake, and both presuppose that we make a judgment of reflection rather than either a judgment of sense or a logically determinative one’ (1790: 97).

First Part, Section I, Book II Analytic of the Sublime, #23.

Allan Sekula, in Fish Story, wrote about Friedrich Engels’ understanding of the role of the working class in the success of British industry in the mid-19th century.

‘Standing on the deck of his ship as it sailed upriver to London, Engels was straddling two very different ideas of panoramic space: the older pano­ramic tableaux of the Dutch and the new mobile panorama of an accelerated age of steam. He described a liminal maritime space that was just beginning to be enveloped by the polluted miasma of urban industry‘. (Sekula, 1955: 45).

Sekula went on to relate that to the paintings of J.M.W. Turner.

‘This collapse, or blurring, of panoramic maritime space in painting was first grasped by J.M. W. Turner, in works produced coincidentally with the first appearances of ace.ingoing steam-driven ‘ships in the decade preceding Engels’ voyage up the Thames. This is not to reduce the Turneresque sublime to a simple technological determinist explana­tion, but rather to suggest that a painted sky that presumed the wind to be a motive force had a dif­ferent referential status from one in which steam and smoke were introduced as evidence of new powers. (Sekula, 1995: 45). 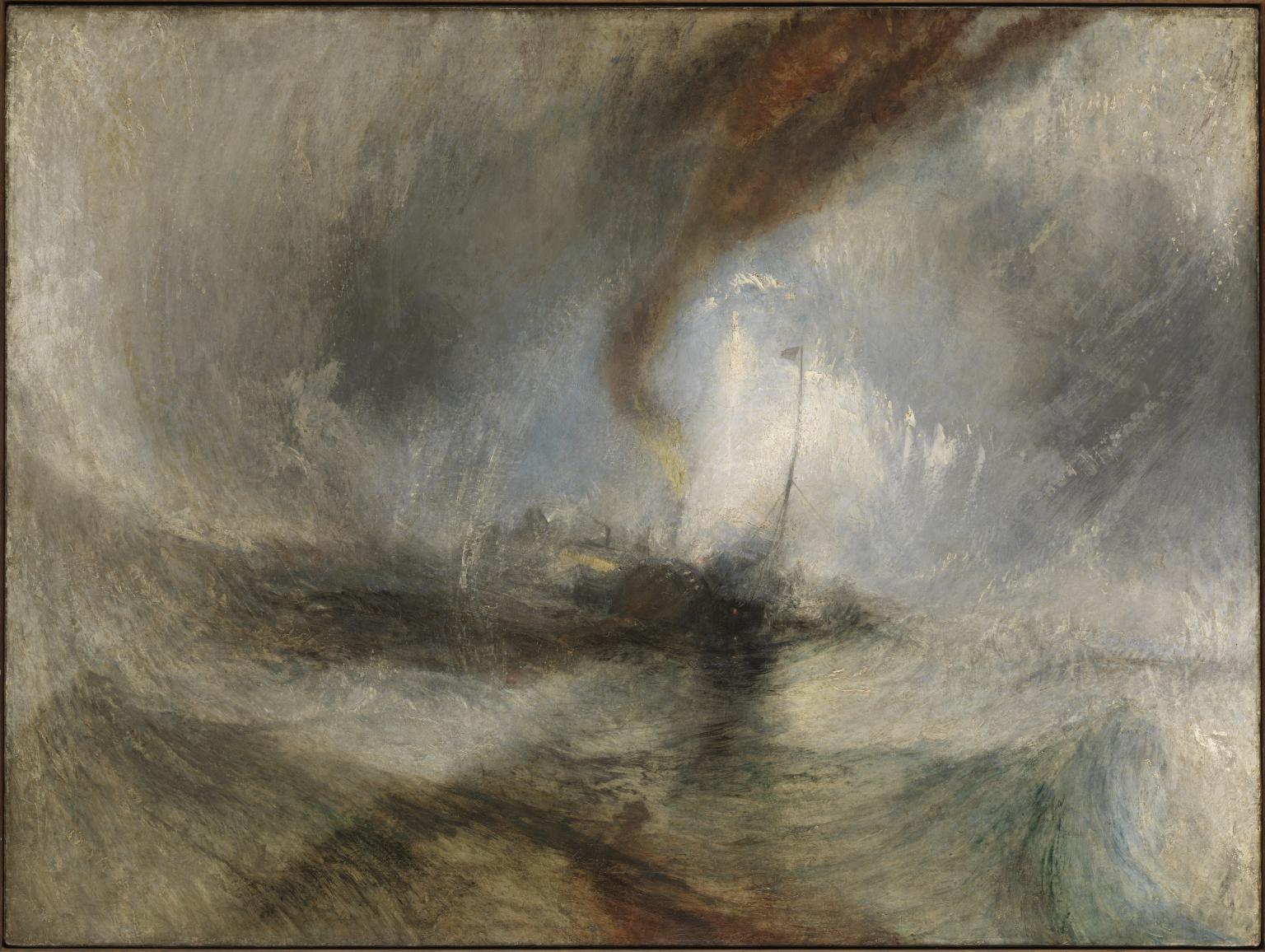 ‘Steam cut an imaginary straight line through a space previously governed by the unpre­dictability of the wind. Paradoxically, however, steam made the possible directions of movement less evident in the aggregate view of ship and sea and sky. A line of smoke from a funnel is not always an indication of the vector available to or taken by a ship. Only if the speed of the ship greatly exceeds that of the wind, or if the ship steams directly into the wind, will this line indi­cate the ship’s path. Weather became paramount in painting as its actual power over human move­ment diminished, and transit times became more predictable. Turner’s exorbitation of weather occurred at the very historica I moment when it was widely imagined to be vanquished‘. (Sekula, 1995: 45).

Sekula wrote this analysis in explaining his own documentary series – the political, cultural and social importance of (and changes in) man’s relationship with the sea.

Fish Story was a redefinition of contemporary documentary photography. But what I find very interesting is Sekula’s interpretation of  Turner’s work. He was doing the same job – storytelling, combining the power of modern technology and the forces of nature – with a picture of the real and the unreal.

Turner was more than an expressionist – he was a narrative poet, and a modern documentary photographer can learn a lot from his practice.

W.J.T. Mitchell, in Landscape and Power  noted that “Landscapes need to be decoded, they don’t merely signify or symbolise power relations; it is an instrument of cultural power. Landscape is a dynamic medium, in which we live and move and have our being, but also a medium that is itself in motion from one place of time to another. Landscape circulates as a medium of exchange, a site of visual appropriation, a focus for the formation of identity.”  (1994: pg 5)

Liz Wells, in Land Matters: Landscape Photography, Culture and Identity also commented that “The content of images may seem natural. But representational and interpretative processes are cultural in that they are anchored in aesthetic conventions. Photographs substitute for direct encounter; they act as surrogates, mediating that which was seen through the camera viewfinder”. (2011; pg 45)

Culture and context thus create considerable impact on the way the photographer views the scene and creates the image.

Snyder’s chapter in Mitchell’s book discusses Carleton Watkins (1829-1916). Watkins was a very early example of a photographer working to explore the capabilities of the still new plate technology, to document the landscape of the American West in essentially a picturesque vein. Snyder makes reference to Watkins’ work as ‘picturesque-sublime’. It strikes me that whilst the American landscape Watkins portrayed is beautiful, the term ‘sublime’ does not strictly apply – as Watkins was capturing ‘what is’ rather than ‘what could be’.

Recall that Turner changed the angle of the sunset in the Temeraire to portray the scene as he imagined it, not exactly as it was. Turner interpreted his scenes, often never even seeing them first hand. Constable painted essentially what was in front of him, albeit with his own interpretation of light, colour and composition. Both men delivered beautiful paintings, yet Turner seems to me to be appealing more to the concept and ideas behind the scene, even when depicting an actually existing landscape (a la Kant).

In the essay, Snyder also references Timothy O’Sullivan (1840-1882), O’Sullivan worked as a teenager for Matthew Brady (1822-1896) in recording the American Civil War. O’Sullivan then went out on his own to provide his interpretation of the American landscape, which, in Snyder’s words “.. were made for the first modern surveys of the American interior, the first surveys managed and directed by civilians working for the government” (Mitchell, 1994: 198).

O’Sullivan remains in the ‘picturesque’ camp, although Snyder also places him as ‘picturesque-sublime’. O’Sullivan actually ‘arranged’ the buggy in the image below by dragging it into position to his liking, to create a scene which is both documentary and of compositional interest. By placing humans in the scene, O’Sullivan creates images of wildness and desolation. I view O’Sullivan rather like Roger Fenton (1819-1869), who reportedly arranging the cannonballs in the Valley of Death, to document the impact of war. After all, it was rather hard with the technology of that time to capture the actual battle. No embedded reporters with high speed cameras. Brady dealt with this by portraying the aftermath, the dead. Fenton showed the desolation. Roger Fenton. 1855. The Valley of the Shadow of Death. Library of Congress.

A photographer that is not as well acknowledged, though one of my favourites, is Adam Clark Vroman (1856-1916). In 1895, Vroman started work on a series of California missions, and for the next ten years he photographed the American Southwest. His work was documentary in intent, capturing the landscape but as lived in by native America Indian Tribes. Unlike much other photography of that time which either glamourised or (unfortunately) trivialised the people, Vroman set out to record their lifestyle and habitat with precision and, to his best ability, objectivity.

Arguably ‘picturesque’, in some ways he is a forefather of the New Topographic Movement, reflecting human impact on the landscape, depicted with a lack of emotion. I should note that Vroman’s dignified yet honest portrayal of the people of the Tribes and their habitat very much influences my own documentary work. Looking forward to exploring that in the MA program. As noted, landscape is not a principal focus of my photographic practice, though landscape can teach so much about photography. I look forward to learning a great deal more.

BURKE, Edmund.1757. A Philosophical Inquiry into the Origin of Our Ideas of the Sublime and the Beautiful. Oxford: Oxford Paperbacks.

PRICE, Sir Uvedale. 1796. An Essay on the Picturesque: As Compared with the Sublime and the Beautiful. London: Robson.