Leang Seckon was born in Prey Veng Province in the early 1970s, and thus was a child during Khmer Rouge times. He graduated from the Royal Academy of Fine Arts, Phnom Penh, in 2002, and has been exhibited widely in Cambodia and overseas.

In 2010, Rossi & Rossi hosted his first solo exhibition in Europe. The gallery staged a major exhibition of his work, When Head and Body Unite, in Hong Kong, in 2017.

From Peter Sharrock’s introduction to the catalogue of that show:

‘Leang Seckon’s paintings and collages are dense tapestries that attest to a magnificent, ancient sensibility that has survived the vicissitudes and periodic nightmares of Cambodian history. His draughtsmanship and technical innovation articulate the living presence of the artistic gift that produced … Angkor a thousand years ago. The Cambodians, from their apogee in 1200 CE – when they constructed and sustained the greatest empire on earth outside China – declined over the centuries in economic and political sway into a dignified impoverishment, then were plunged into decimation in the twentieth century under Pol Pot’s Khmers Rouge. Seckon’s new works trace this brilliant and terrible past in a synthesis that searches for regeneration’. (Catalogue, 2017: 3).

I am intrigued by his use of multimedia, including photographs, and his blend of the distant past, the recent past and the present.

This is illustrated in Independence Monument, which features ‘mug shots’ from Tuol Sleng (S21), the infamous Khmer Rouge interrogation and execution centre, in Phnom Penh. Whilst the Monument was only constructed in 1958, after independence from France in 1953, it was designed to echo the splendours of 13th/ 14th century Angkor. 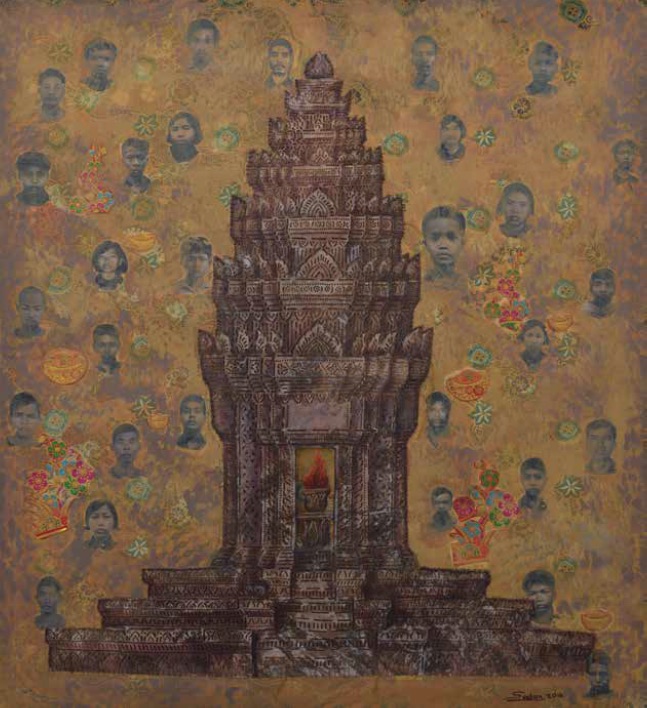 He also references Cambodia’s mixed colonial and violent past.

The artist also uses text, and notes on Tonle Sap River Circulates that:

‘With writing in an eight-word poetry style, this painting details the lives of animals in Cambodia, especially in its central plain. It also uses the names and characteristics of each animal to draw comparisons with the country’s present, ever-changing society. This is the first time I combined painting and poetry. For the Khmer people, the riddle written on this work might be easy to understand; but for foreigners who do not know Khmer, it might be hard to grasp. However, everyone can derive some understanding by looking at the characteristics of each animal’. (Catalogue, 2017: 27). 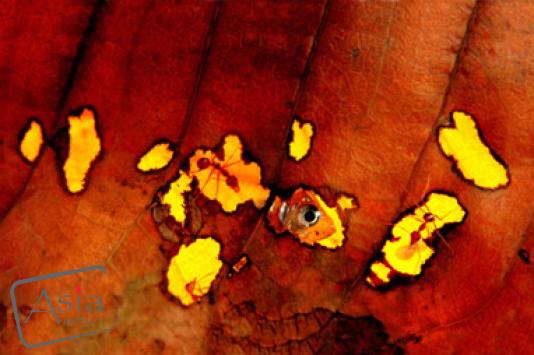 In today’s Cambodia, politics often refers back to the days of Angkor, and, whilst the Vietnamese Liberation (1979) from the Khmer Rouge is commemorated every year, there is scant attention paid to the suffering of the survivors. Often the survivors do not want to recall what happened, for complex personal reasons, ranging from a desire to block the memories, to ‘survivor’s guilt’.

In some senses, the constant reference back to Angkor blocks a healthy and open debate about the current state and aspirations of a modern Cambodian society.

David Ayres, in Anatomy of a Crisis. Education, Development and the State in Cambodia, suggests that since the times of Angkor, education has been used as an instrument of control by the controlling elites (the Buddhist Pagoda, French Colonialism, Sihanouk’s Independent nation and so on) rather than as a way to create an entrepreneurial, open, innovative society. This is particularly needed today, in all fields, including the arts.

Ege goes on to write:

‘Explaining what it means to be Khmer versus what it means to be Cambodian is an ever-present struggle for Cambodia’s youth. … Younger artists struggle in this world of past and present; constantly pushing to create art which is representative of their individual aesthetic, while simultaneously being accepted by the public at large. In post Khmer Rouge Cambodia, artists are wrestling with how to find a creative and free voice while still staying true to the traditional forms of artistic representation which make Cambodian art unique’. (Ege, 2016: 2).

I wonder whether a non-Cambodian could execute such works, referencing both the glory days of the Khmer Empire, and Colonial rule, without falling into an observational, Western, cultural trap.

On the other hand, whilst focusing on personal stories of survivors also has many aesthetic and ethical complexities, in some senses being an ‘objective outsider’ can be helpful. My experience over the past 15 months has been that Cambodians seem relatively open to foreigners on their experiences. There have been multiple occasions where even the immediate family did not know the story, until this project started.