In 2003 the United Nations General Assembly adopted a resolution approving a proposed agreement reached between the UN and Cambodia concerning the prosecution of those holding major responsibility for the crimes committed between 1975 and 1979. This was later ratified the Cambodian Nation Assembly. It led to the setting up of the Extraordinary Chambers in the Courts of Cambodia (ECCC), with  jurisdiction over crimes of genocide, crimes against humanity, war crimes and the violations of the Hague Convention.

Three Khmer Rouge leaders have so far been convicted, two others dying before proceedings were completed. Other cases are ongoing.

Yim Tith was born in the Tram Kâk district of Takeo province in Cambodia. He is married to Ung Ken, the sister of the accused Ta Mok.

Buddhist monk in Takeo and Phnom Penh at first, Tith then became a member of the Cambodian Communist Party in the 1960s. During the 1970-1975 civil war, Tith became a high profile leader of the Kirivong district.

In 1976, Tith allegedly became party secretary of the Kirivong district. Reportedly, he exercised effective control over the individuals, security centres and other crime sites in the area. At the Kraing Ta Chan security centre, it is estimated that almost 15’000 individuals – so-called enemies of the regime and its ideology- were imprisoned, tortured and killed under his authority.

I am posting this as today two diametrically opposed decisions were given by the judges.

This is the kind of ‘artefact’ that I might make available at the FMP installation, for visitors to read and ponder. 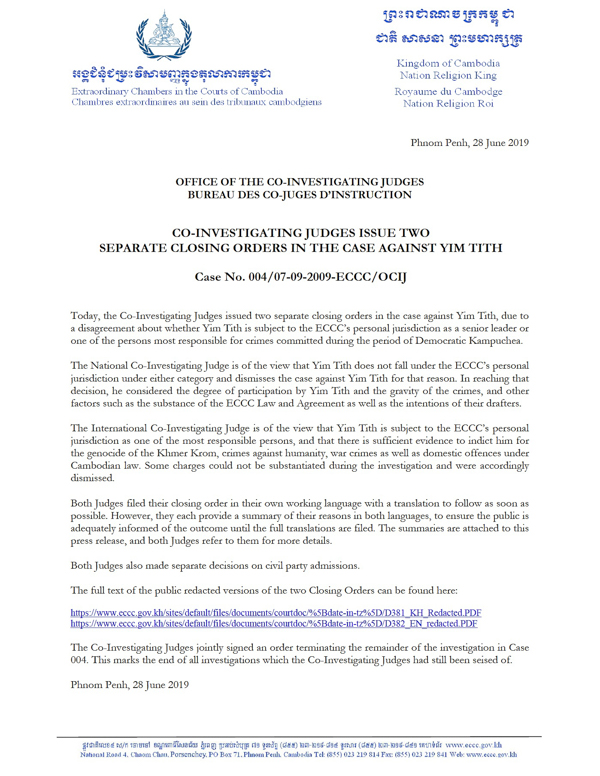 From the Cambodian judge, Chea Lang: 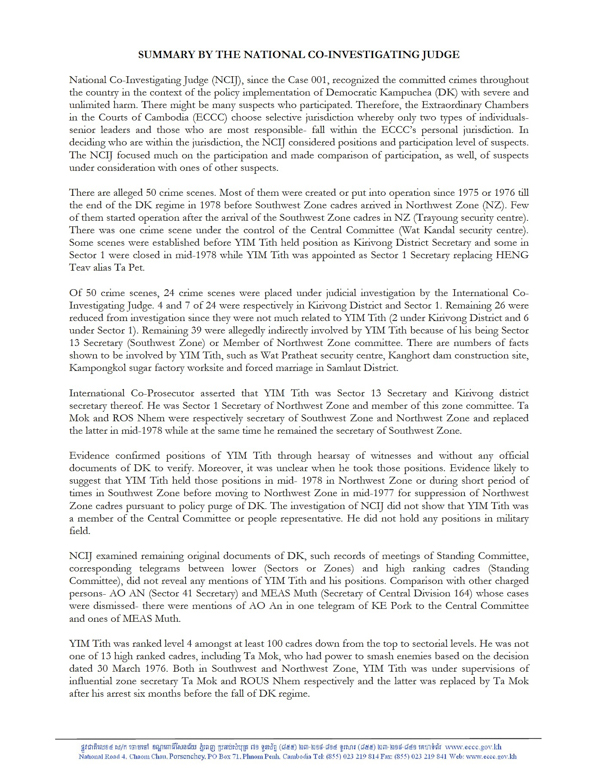 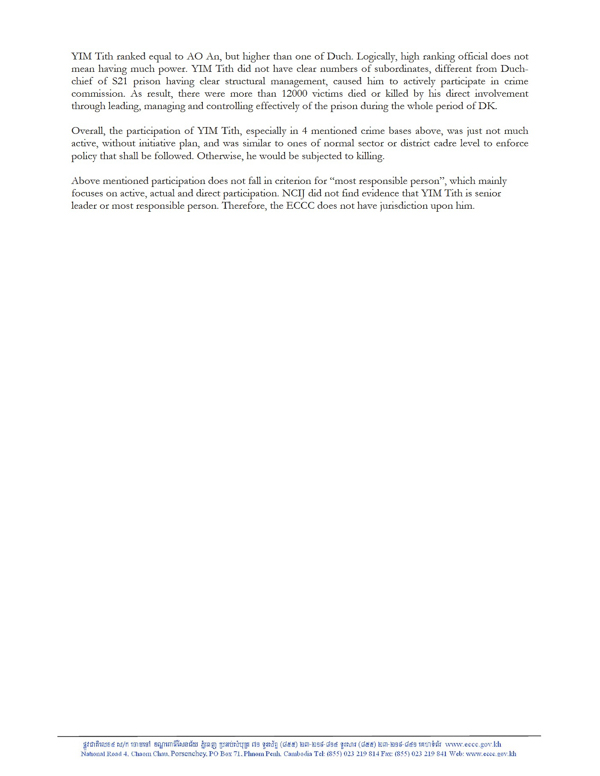 From the International Judge: Nicholas Koumjian: 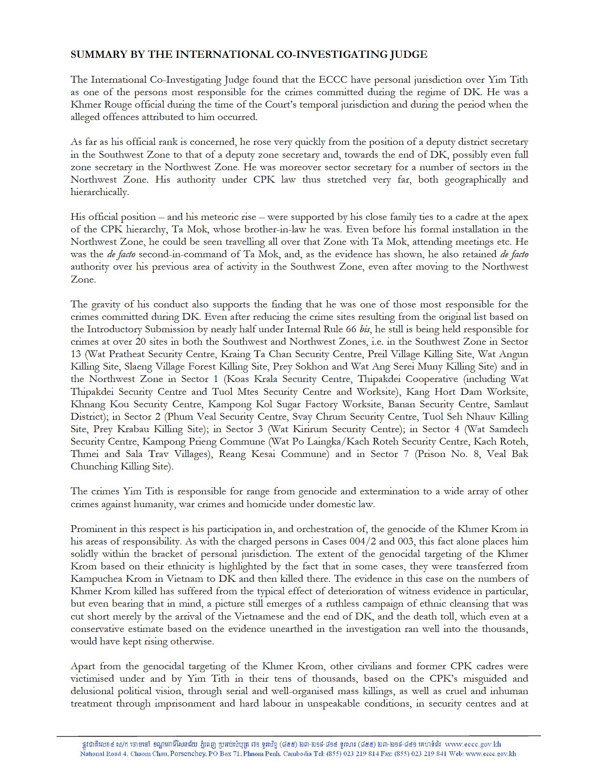 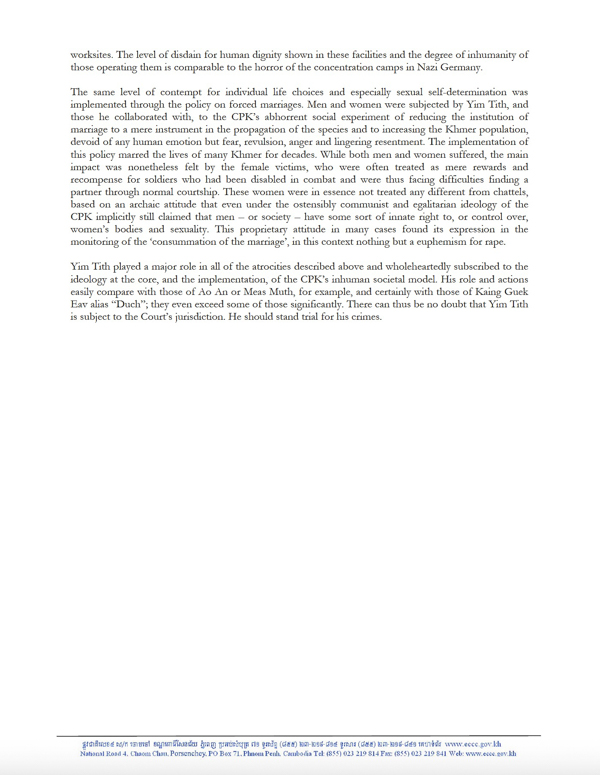 What will happen now? Is justice being served?

Chea Leang (Cambodia): Graduated with a Master of Laws from Martin Luther University in Germany in 1995. In 1996, she started in the legal profession at the Ministry of Justice and was promoted to Deputy Head of the Justice Department’s Office of Justice in 1999. She started her career as a prosecutor at the Court of Appeal of Cambodia in 2002 and took part in numerous court proceedings. She was also responsible for inspecting the work of prosecutors at the Provincial level. She has received other training such as: human rights in Denmark, legal and judicial cooperation in Japan, and criminal investigations, international in The Hague, Netherlands.

Nicholas Koumjian (USA): Prior to his appointment in the court, Koumjian was a senior defense lawyer for the trial of ex-Liberian President Charles Taylor in the Sierra Leone Special Court. He replaced the role of Abdullah Banda and Saleh Jerbo at the International Criminal Court in a case involving the situation in Darfur, and helped the victims of Ivory Coast. He was a civil party defense lawyer for the Charles Taylor trial, a senior UN-funded Crimes Unit in East Timor, and a lawyer at the International Criminal Court for Former Yugoslavia and the District Court of Bosnia and Herzegovina. Before entering the international scene, Koumjian worked as a prosecutor in Los Angeles for 20 years