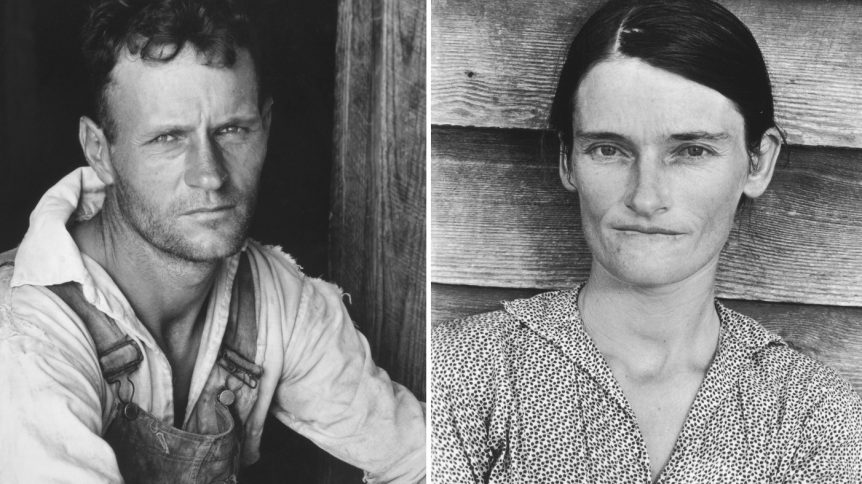 During the Depression, Fortune sent writer James Agee and photographer Walker Evans document the lives of cotton sharecroppers in Alabama. It was meant to be part of a series Life and Circumstances. Agee was a poet, and he described himself as ‘more a communist than not‘. Evans was on loan to Fortune from the Farm Security Administration (FSA).

Fortune never published the resultant story, and it only saw the light of day in 1941, where the work’s impact was rather overwhelmed by the events of WW II. It was released as a book Let Us Now Praise Famous Men, although only sold 600 copies. Later, it became a 20th Century classic.

Unlike the normal journalistic tradition, Agee put himself deeply into the story – to the point where we admitted to feelings for the visiting sister (Emma) of one of the families the pair documented, whilst he was living in their home. This is partly why the original work was rejected.  Yet the resultant collaboration is a modern classic – ranging from personal soul searching (Agee starts the book almost apologising for doing it) to anger about the conditions he found, and via dense, Joycean prose. It is illustrated with Evan’s powerful imagery.

There are two aspects I want to pick up, as the book has been reviewed and reviewed over again.

First, ethics. Agee renamed the characters in the book (so Floyd and Allie Mae Borroughs – in the header – became George and Annie Mae Gudger. Emma was Annie Mae’s sister, their father being noted in the book as Thomas Woods. Given the intense detail that Agee recorded of their lives, this was a tad surprising although an act of conscience on his part.

Of more note, it seems that none of the families got much from the enterprise – One of Allie Mae’s brothers claimed they didn’t even see the book. This is similar to what happened in other FSA project’s – Dorothea Lange’s iconic photograph of Florence Owens Thompson, popularly known as Migrant Mother, for example.

I would hope that all modern-day documentarians take a more respectful approach.

Second, prose. There is of course an ongoing debate about whether photographs should stand alone without text. I am not going into this more, here, as it is covered in several places in this journal.

But it is impossible to miss the depth of understanding that Agee’s prose offers the viewer about both the situation found and the people involved. Agee wrote with a  view to influencing his readers well beyond the tales of the ‘dust bowl’.

Interestingly the original book did not have an index of Evan’s photographs, and a little online detective work is required to get that detail. 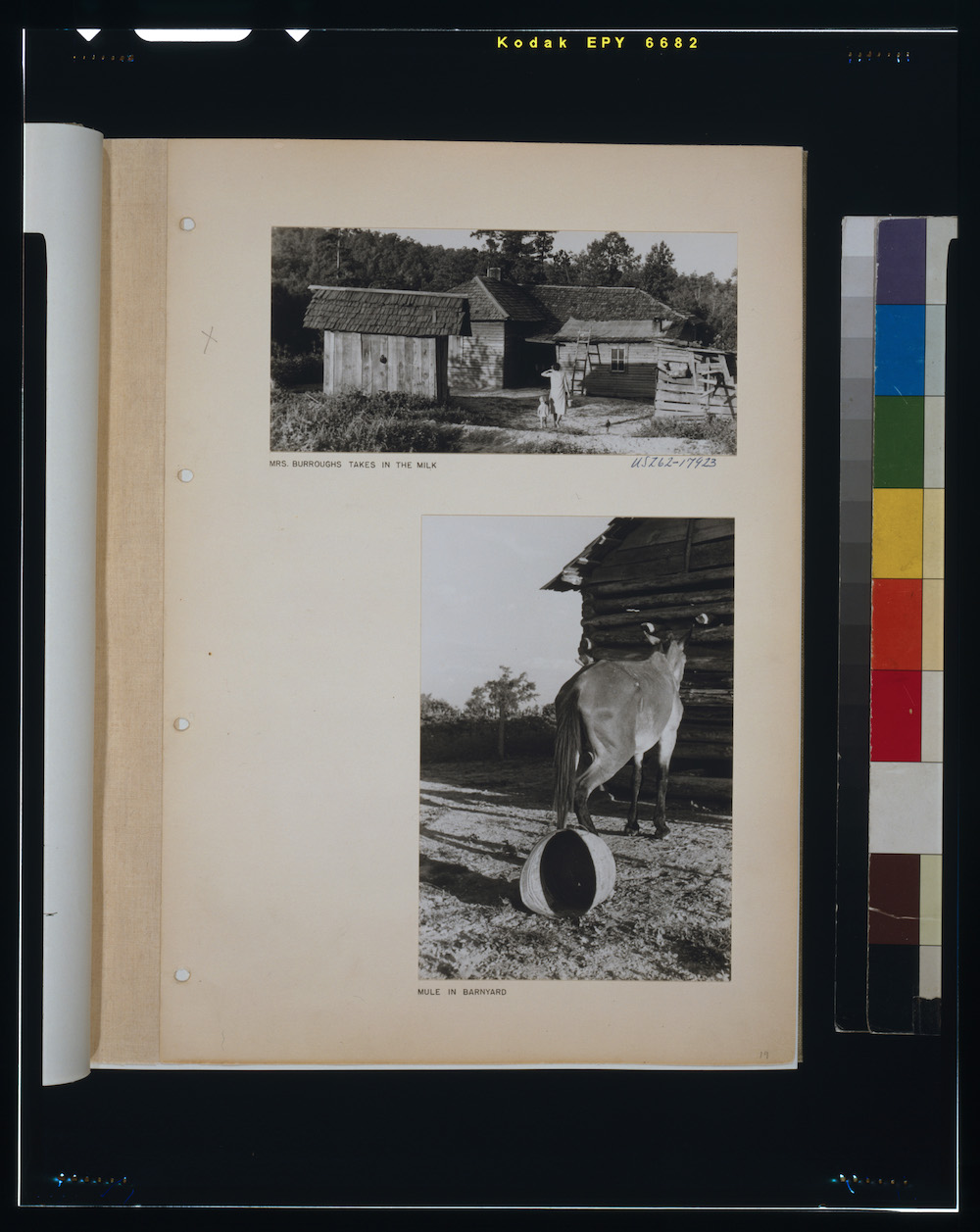 Reading Agee’s words adds so much to the understanding on the scene, far more than Evan’s could (or wanted) to show.

‘One of these fields begins very deep behind the house on its left, and along its left flank the cotton plants nearly touch the wall; it is nearly all in cotton. Back beyond it and beneath it, in a clearing in the tall woods, is a smaller patch of corn. The field that falls away two hundred yards in front of the house is all in adolescent corn, softly flashing, ending at tall forest whose leaves run like quicksilver wheat in the lesions of heated air. Out at the right of the house is the rough stretch of mid-hill, partly bare, fluted with rain, not planted, sprung with tall weeds and smoky grasses and with berry briars, young pines and little runs and islands of young trees, seeming open, yet merged before long in a solid coastline of well-grown woods. Out along the road that, beginning just below the house, leads out to the right and north, there are further small floors and slivers of farm land, all but one less than an acre, and lying much within the moistures of trees during several hours of the day, in cotton, in corn, in sorghum cane, in peanuts, in watermelons, and in sweet potatoes. Some of this land of Gudger’s is sandy clay, dull- orange to a dead sort of yellow; some is dark sand; a little is loam. He has in all about eleven acres in cotton, nine in corn, a quarter in sorghum cane, about half an acre divided among the melons, peanuts, and potatoes, and there are field peas planted in the corn rows‘. (1941: 112)

The same is true of the personal family details. Here is the now iconic photograph of Allie Mae. 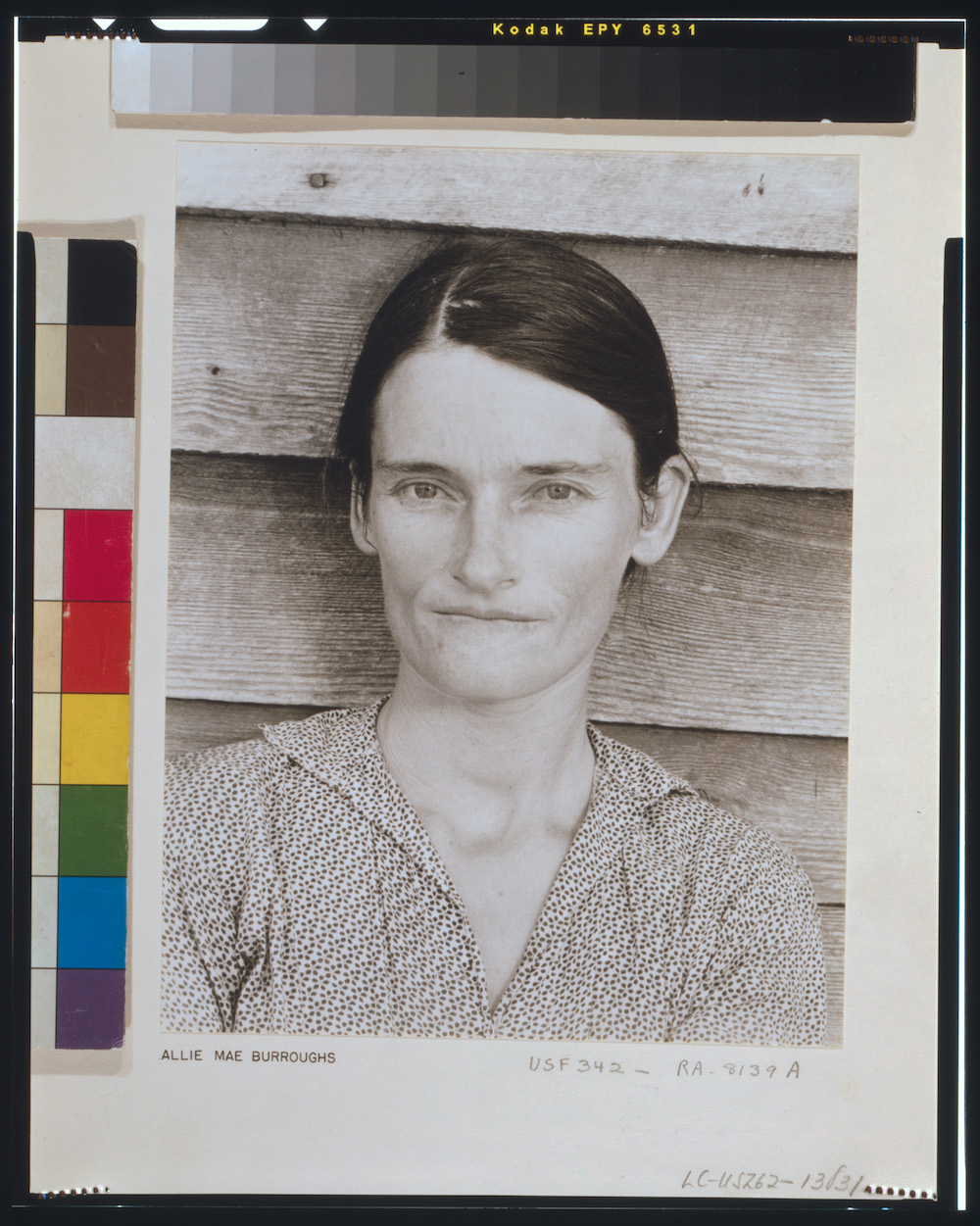 ‘Saturday, Mrs. Gudger:
Face, hands, feet and legs are washed.
The hair is done up more tightly even than usual.
Black or white cotton stockings.
Black lowheeled slippers with strapped insteps and single buttons. A freshly laundered cotton print dress held together high at the throat with a ten-cent brooch.
A short necklace of black glass beads.
A hat.
She has two pairs of stockings. She sometimes goes bare- legged to Cookstown, on Saturdays, but always wears stockings on Sundays.
The dress is one of two she would not be ashamed to wear away from home: they are not yet worn-down or ineradicably spotted. In other respects it is like all her other dresses: made at home, of carefully selected printed cotton cloth, along narrow variants of her own designing, which differs from some we saw and is probably a modified inheritance from her mother: short sleeves, a rather narrow skirt several inches longer than is ordinary. No kind of flaring collar, but in some of them, an effort to trim with tape. They are all cut deep at the breast for nursing, as all her dresses must have been for ten years now. The lines are all long, straight, and simple‘. (1941: 228)

Much as Evan’s photography is rightly lauded – his acute observational eye and his documentary detachment stand out for me – it is Agee’s prose that drives the book, and cements the reader’s understanding of the personal stories.

Parts of the book – which ranges from emotional angst, to logically listed detail, to poetic descriptions – is not always an easy read. And it is long. Still, I would recommend it to anyone concerned with the power of words. And I think it helps fortify one side of the debate.

A note on Agee: He was a heavy drinker and smoker, and he died age 45 in 1955.  In 1957, his novel A Death in the Family (based on events surrounding his father’s death) was published posthumously and in 1958 won the Pulitzer Prize for fiction.