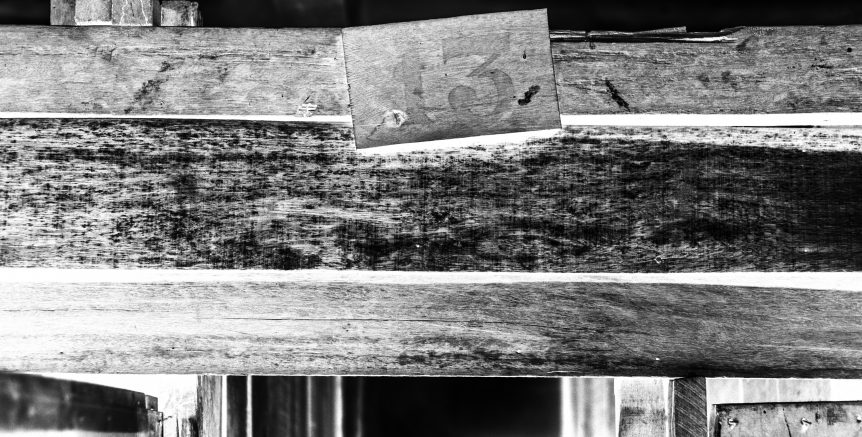 The impact of the Genocide of 1975-1979 is still, in many ways, hidden. It is visible only in traces, both physical and psychological.

My project is not about the Genocide per-se, but it does need to contextualise that terrible event as it sits in the background of the personal stories that I am exploring and documenting. It is a part of my personal narrative about Cambodia.

In earlier work, I created images some of which, frankly, fell foul of being ‘dark tourist’ photographs – rather literal records of the museums and mass graves associated with the Genocide. Some were more successful, I feel. Since that time, I have been exploring the idea of aftermath, shown by traces.

This work is influenced by that of Sophie Ristelhueber, Lukas Birk and others.

Partly through the exploratory work on Cyanotypes, I became intrigued by the notion of using negatives to portray these traces. I am acutely aware that there are lines of caution between effective and respectful documentary imagery, and over-done, crass, dark tourist photographs, and I began to see negatives as a way to both challenge the viewer and avoid some of these bear traps.

In researching the idea, I was intrigued by the work of artists such as Jennifer West, who uses projected filmstrips in interactive installations. West is, of course, taking the idea of using film way past my simple ‘traces’ exploratory. But her use of the negatives images inherent in the medium both as an artefact and as an apparatus is fascinating. She uses the images in overtly spiritual ways.

And the work of photographers like Daniel Nyblin (1856–1923) using glass plate negatives, has been shown to advantage alongside printed copies of the same images. In fact, I personally find the negatives more interesting, and more engaging, than the printed images.

Neither are directly applicable to my use of negatives, but both show possibilities.

For ‘Landings’, I have decided to show only ‘traces’ images, which frankly is a very narrow slice of my overall Cambodian work. Bluntly, I want to get feedback on the idea, and this seemed  way to do just that. Cemre and others have noted that this approach has some merit, though clearly much needs to be does to develop the work. For example, I have experimented with the idea of using semi-transparent ‘traces’ as interleaves in a  dummy book.

I think it is worth looking at how I got to this point.

First, a Photograph taken last week at Choeung Ek, known as the Killing Fields. Shallow, mass graves are visible. I am deliberately choosing a rather ‘generic’ landscape view, to see what is possible. This was taken as part of a rephotography exercise. I first visited Choeung Ek in 1994, so here is an image from that time, in situ today. Whilst I occasionally use black and white, my ‘photographic heart’ is in colour.

Still, I have experimented with black and white interpretations of the scene as I pursue traces. I find this interesting, as it does provide more focus on the shallow graves, yet, bluntly, is lacking impact.

On the other extreme, I experimented with digitally creating ‘colour negatives’. Whilst the colour here is not exactly Kodachrome, I think it serves to illustrate what is possible. More focus on the graves, but I feel it is falling into the ‘too arty’ category. I would greatly value the opinions of anyone reading this post. Overall, it is not really the kind of documentary image that I believe will sit alongside my story telling, colour  work.

I have also done a very quick scan of some of my old negatives. I do not yet feel convinced on the colour treatment.

So, I have experimented and created presets in Lightroom to manufacture ‘digital negatives’. Of course, if I pursue this approach further, I should actually take film shots in black and white, and use the negatives directly. Right now, though, I feel this is a good proxy. I feel that is is beginning to get some power, focused a little attention on the graves, and begging some questions in the viewer’s mind as to what they are seeing.

When I go back to the very first image, above, this is the equivalent. It seems to me that different details are being highlighted – the chain, for example, and the shapes of the flowers and bone shards.

And, from an audience perspective, such negatives require interpretation. They are just not our normal way of seeing. Instead, these negatives are a step in the process of seeing, not seeing itself.

I could see these traces working alongside other images, videos and artefacts in a multi-media installation as part of my eventual FMP. It was Sarah that suggested that they would also be amenable to using with light boxes.