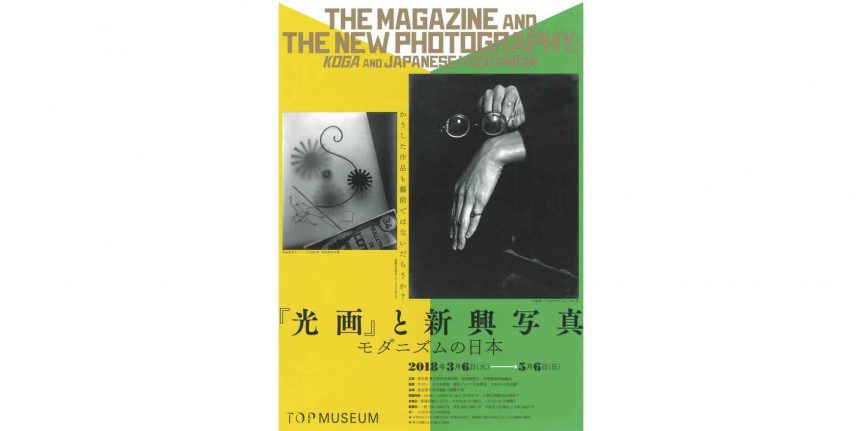 I have just been reading Return to Photography, by Nobuo Ina (1898-1978). Ina was influenced by thinking on photography emanating from Germany (Bauhaus et al). This essay was published in 1932, and predates Walter Benjamin‘s The Work of Art in the Age of Mechanical Reproduction (1936), with which it bears some similarities.

Ina’s essay appeared in the first edition of Koga magazine, which was published in 18 issues from 1932-33. It was hugely influential as a philosophical and practical grounding for Japanese photography, including the Surrealist school. He posits that the ‘machine quality’ of the camera identifies photography’s uniqueness, and its difference from painting. In fact, the pursuit of painting-like images was a false pursuit:

‘The camera’s machine quality is the origin of its uniqueness and reproductive truth’. (1932: 13).

Ina goes on to stress that photography can unleash new artistic possibilities:

‘Photographic art has great potential to produce new beauty if applied in combination with all the technologies of the current new era‘. (1932: 4).

He quotes Bauhaus texts, as well of those by Lazlo Moholy-Nagy and Albert Renger-Patzsch amongst others. He also follows the bauhaus line that photography has three forms of execution – camera less (specifically, photograms); new forms using machine technology, following from the camera obscure; and photo-montage. He also lays out three kinds of photographic styles.

I: Object: to express the special beauty of an object.

II: Photographic art as the record of an era, a report on life.

Ina means ‘documentary’. This became a serious preoccupation of Japanese photography, particularly after World War II, when the Country was searching for new and independent meaning, before and after the American occupation. In fact many photography theorists suggested that this search meant there was only an artificial line between the pursuit of ‘reality’ and the pursuit of ‘art’ in photography – directly leading to the Provoke, ‘protest’ movement across literature, performance and photography.

Ina notes however that:

‘One cannot simply fix an opinion in advance. A photograph can express shiny bright asphalt with a river-like effect. That is why in almost all circumstances a photograph needs a title to provide explanation. Newspaper photographers sometimes succeed in capturing a moment in our life through pure chance. A photographer must be highly sensitive to things like this’. (1932: 7).

This section is where the phrase Return to Photography comes from – as Ina believes that photography is a unique medium with which we can properly record modern society and culture.

III: Photography is “Sculpture in Light”.

Moholy-Nagy and Man Ray are representative of this trend.

‘The light is without shape and has no limits, and it is the photographer who turns that light into a structure’. (1932: 8).

What I find most interesting, though, is Ina’s focus on the individual behind the camera.

‘The alpha of photographic art is the man who stands behind the camera. Moreover, it is the man’s place in society – standing on a new place and capturing a new subject, recording a moment in the world, reporting, constructing in light – all these creative activities originate from the human as a social being. … The content liable to be used in the photographic art derives from moments in their social lives as humans. It cannot include anything other than exists in the natural world’. (1932: 13).

And he writes of photographer’s not looking with a human eye, but with the mechanical ‘camera’s eye’. In this, he pre-dates Flusser. He goes on to note that the dialectic opposition offer and content in an image is where the creation or art happens.

‘When the human, the subjective, looks at the object, he looks not with the human eye, but with “the camera’s eye”. Within the limitations of expression, he can see through the camera as the expressive method, and the light ray as the expressive medium – that is, the method of photographic art. In this way, in order to form the content a certain necessary method is required’. (1932: 13).

This has resonance with Benjamin’s observation that:

With photography, in the process of pictorial reproduction the hand was for the first time relieved of the principal artistic responsibilities, which henceforth lay with the eye alone as it peered into the lens. (1932; 4).

Finally, Ina recognizes photography’s widespread application across all aspects of modern, technological society. I particularly like his inclusion of ‘broadcasting’ and ‘criticising’ – perhaps foreshadowing the networked image, or maybe that is too much of a stretch.

‘Having said that photographic art is young and has little tradition, it is not subsidiary to other arts.  On the contrary, in our modern industrial and technological society, photography is particularly appropriate for recording social life, nature, broadcasting, analyzing and criticizing’. (1932: 13).

Again, something parallel appears in Benjamin’s work, when he discusses ubiquity of authorship:

‘For centuries the situation in literature was such that a small number of writers faced many diousands of times that number of readers. Then, towards the end of the last century, there came a change. As the press grew in volume, making ever-increasing numbers of new political, religious, scientific, professional and local organs available to its readership, larger and larger sections of that readership (gradually, at first) turned into writers’. (1932: 22).

Both Ina and Benjamin foresaw, to one degree or another, the impact of technology and its widespread implications on everybody becoming a photographer and a writer.

BENJAMIN, Walter. 1936. The Work of Art in the Age of Mechanical Reproduction. 2008 Edition. London: Penguin.