Last autumn I decided to join the local Frome Wessex Camera Club, something I had not done before, as I am not a ‘competition’ person, and I have a dislike of the kind of ‘technical nitpicking’  on images that can go on. However, the club is a delight. What brings everyone together is a love of photography, and a desire to learn. The group meets every week, and attendance can be between 35 and 55 people every week – which is a better record than a collective I have been part of for many years, Photo Bath.

I do not attend every meeting, tending to stick to evenings when there is a talk being given. Last Friday there was a ‘critique evening’, where members either brought along prints or digital images for review by a small panel. I thought I’d join in.

However, and very much to my surprise, the Chairman of the Club, David Chedgy, asked me to be on the 3-person critique panel a couple of minutes before the event started. I knew that David is wanting to open people up to more adventurous photography, so I had prepared, as an intended participant, a few street images in a ‘Provoke‘ style. But I did not expect to be a critic.

‘Street’ is hardly ever a genre featured in competitions – although one could make a good case that travel photography, a standard for such events, is just street in another guise. A subject for another post is that photographers generally easily take pictures of people whilst travelling to ‘foreign places’, but have real trouble doing the same in the local High Street.

I had conducted a workshop for the group on street candid portraiture in 2018, as part of the Surfaces & Strategies work, so I did know some of the group’s work, which helped. David introduced me as a ‘non-competition guy’ with a lot of photographic experience, and an iconoclastic view. How could things go wrong?

In any event, the evening was a success. I am an experienced public speaker and teacher, where I tend to focus on simplifying things for the audience – not in any way with a superior air, but because I have learnt over time that boiling things down, almost into bullet points, is the best way to approach such group conversations.

Some of the images were very good, and required little comment, other than occasionally a discussion about alternate crops or moving around to get a different view. Szarkowski’s 5 points were useful in this regard. The thing itself, the detail, the frame, the timing and the vantage point. This certainly helped in discussing work outside of my normal practice areas. 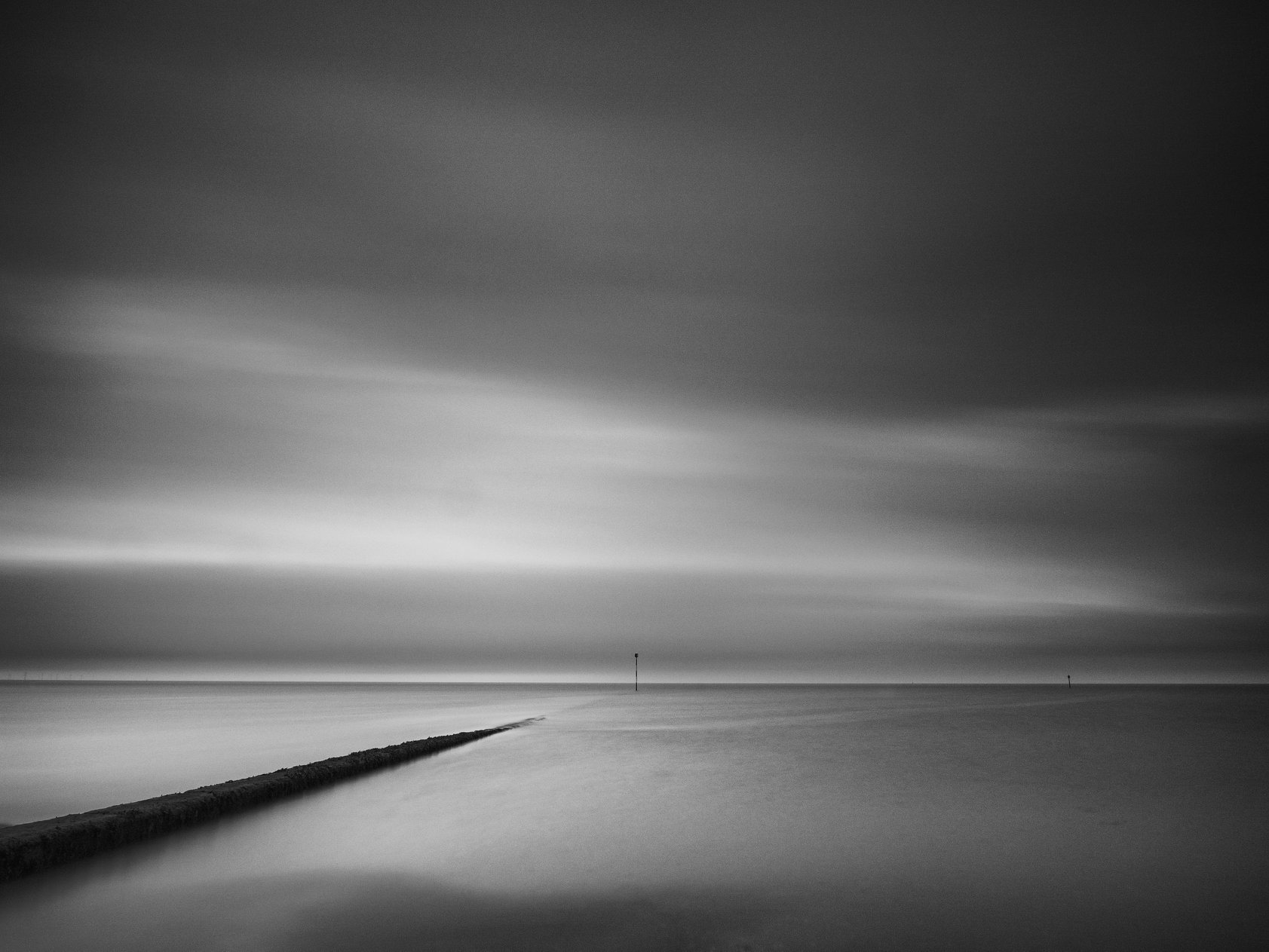 Variants on Szarkowski’s criteria do indeed appear in competition critique, though I understand from David that the tendency is to focus on the technical aspects of an image – sharpness, colour, compositional ‘rules’, print quality and so forth. I was thus also able to highlight some ‘pet hates’ – over sharpening and HDR effects – which detract from otherwise strong images , and which I was relieved to hear were thoughts shared by many in the group. It is just that club competitions which focus on technicalities tend to push people to such things in an effort to increase impact, rather than more fundamental, compositional work.

It was also useful to draw on Barthes and Flusser – the former to discuss the impact and stopping power of an image, and the latter to discuss how the photographer’s personal context and attitude (their ‘apparatus’) impacted the image.

I was at great pains to be as constructive as possible, though I admit there were a couple of images which just didn’t work, and I said so. Honesty is always the best policy in such situations.

Right at the end of the evening, the images that I had offered were up for critique – not just by the other two panel members, but, as it turned out by the entire audience. I have been fascinated by Moriyama’s work for a very long time, and although it is not my natural style on the streets, I do have an ongoing project to experiment with such imagery. I submitted the image in the header, and this: 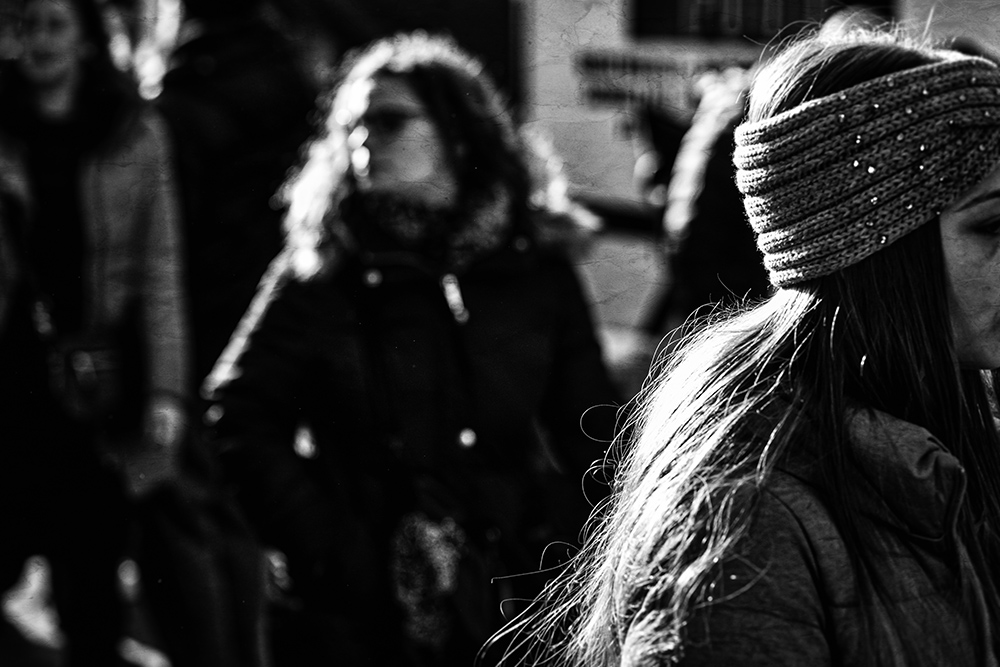 It’s fair to say that the images surprised everyone, although mainly positively.

David led the comments, saying that it is highly unlikely that they would win club competitions. But he went on to say that he thought they were strong, story-telling images. He liked the use of negative space and bold composition. There were a couple of audience members who bluntly stated ‘not for them’, disliking the cut-off frames, lack of sharp detail and so forth. But there was a surprising amount of positive discussion about the framing, the use of blur/bokeh (not often a club staple) and the tension in the pictures because of the ‘unusual’ compositions and relationships of the people portrayed.

This led to a productive discussion about the power of an image (or series) to tell a story. And I was able to examine the idea of shooting a series with a certain intention, rather than visiting a travel location or walking the local streets and just ‘seeing what happens’.

It also allowed me to offer some thoughts on Japanese photography, which was new to many people.

So, what did I learn? There is no doubt that the first year of the MA has given me some new tools to both evaluate images and to discuss them with others. Equally, being able to sort what is important from some of the pretentious nonsense one reads in critical theory is essential. People cannot learn if they are put off by the language being used.  They learn by being able to relate the feedback to their own practice.

One particularly rewarding moment was when a long-time club leaders came up to me and said that the distinction I made in  street photography between ‘lurking’ (waiting for subjects to enter a pre-determined frame) and ‘hunting’ (tracking an interesting subject until there is a useful background) was the learning of the night, for him personally.

All in all, as much a learning experience for me as any of the Club members, and great fun.