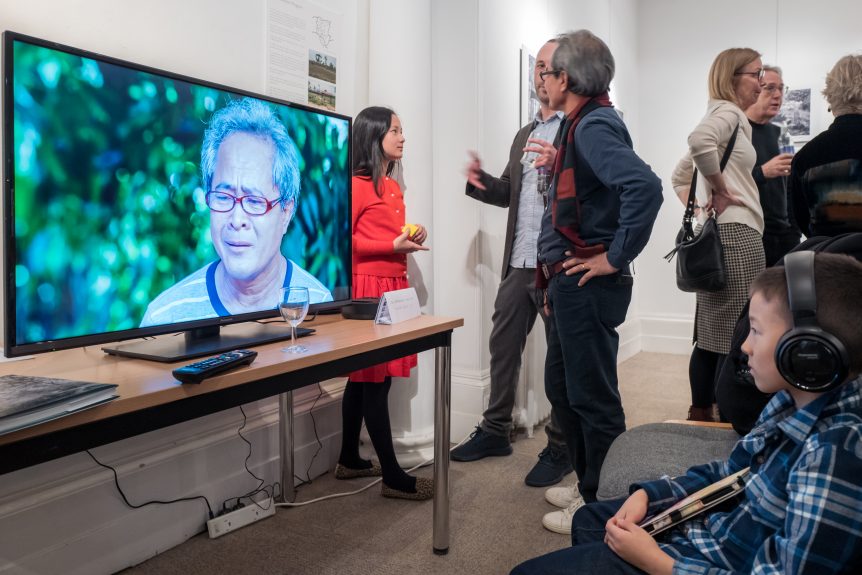 The main ‘private viewing’ was Friday, 6th December, from 6pm until 8:30 pm. I was very pleased to have between 70-75 guests, and in particular was totally surprised by our families from New York and also Luxembourg coming along. They had travelled here especially, organised (and kept secret) by Ingrid and Vicky. It was a lovely moment, and more than a little emotional.

There was also  smaller viewing, the previous evening, for members of the Frome Wessex Camera Club who could not be with us on the 6th. About 15 people came along.

The re-printed books arrived via DHL on the 4th from Phnom Penh – ‘just in time’ delivery – so we were also able to put those into the displays and on sale. Whilst there are a few things that we’d still like to improve on, I am very pleased with the quality of the book, and it got great comments from all who looked at it.

In fact, we sold 27 books in the first couple of days, which was a surprisingly good result. On top of that, and perhaps even more interesting, 5 of the photographs were sold. Selling work about Genocide at Christmas time was always going to be a tricky proposition, but I am gratified that the work has garnered great reviews so far.

Vicky and Matt organised the drinks and snacks, and the BRLSI staff were really helpful – in fact, rather enthusiastic as I was told by more that one that the subject matter and quality of the exhibitions was amongst their best in recent times.

I opened the evening with a short talk, and was followed by Sarath. At one point, the emotion took over but the humanity in Sarath’s words was so well received by the audience. Here is the video:

Both of us spoke from a few bullet points rather than formal scripts. From our somewhat different angles, we talked of the ‘hiddenness’ of what happened, even today. And we both stressed the power of education to deliver the hope noted in the subtitle of the show. Sarath also talked about the process. When we started this documentary project in February 2018, whilst we both had a general idea of what we intended to do, it has turned out to be significantly deeper. Sarath has not talked about his experiences very much before, including to his own family. Having these all written down has proven to be rather cathartic, and has excited his family.

After the introductions, Gunnar Anderson spoke about Sarath, praising his empathy and communication skills which have been essential to all the progress that was made in the Khmer Rouge Reconciliation Areas. Gunnar was the Save the Children (Redd Barna) Country Director in Cambodia when Ingrid and I first founded the educational program. We haven’t seen him face-to-face for quite a while, and he flew in especially from Oslo.

Almost 30 minutes of Q&A’s ensued, which spoke to the engagement of the audience with the subject matter. More than a couple of teary eyes were in the house.

It was good to see the plans come alive. The exhibition very clearly focused on the 14 photographs, and the layout led to easy viewing, with almost everyone reading the quotes embedded in the image. The introductory boards also got a lot of attention, as did the hanging posters with the Khmer Rouge quotes. Having the history and context in the display cabinets meant that there was encouragement to linger, and throughout Sarath and myself found ourselves answering many questions. I was pleased to watch people circulate through the installation pretty much in the direction of travel that I had planned for.

I have been in several group shows before, but this is the first time I have staged a one-man event. it has been an enormous amount of work, with more than a few hiccups, but it is immensely rewarding. It it also rather humbling to receive the feedback on the power of the show and the quality of the photographs and books.

From the visitors book: 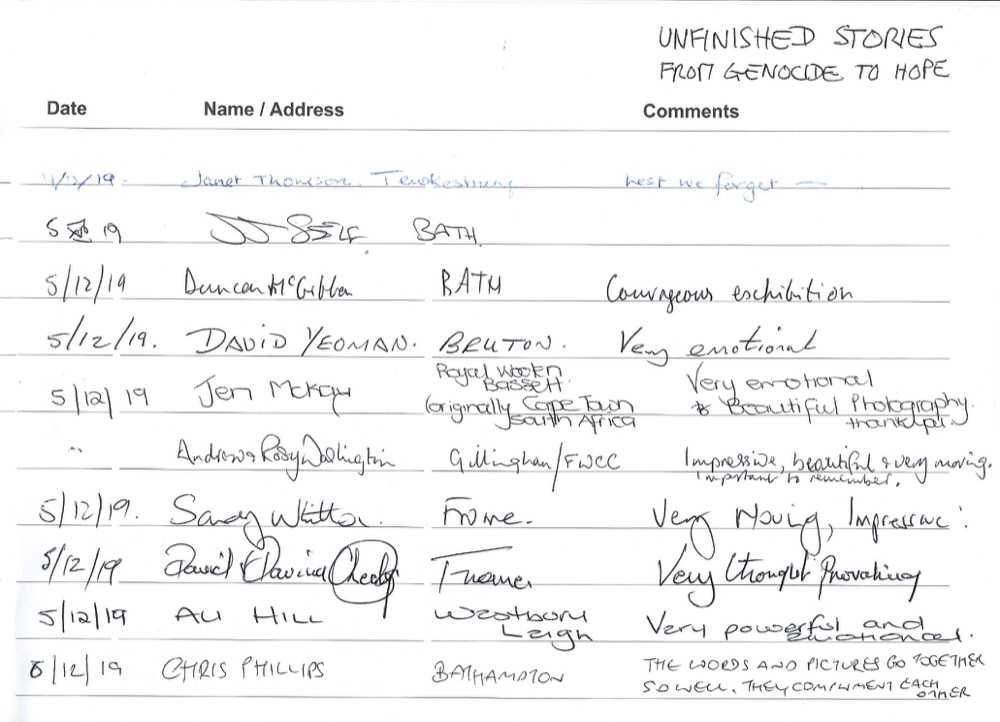 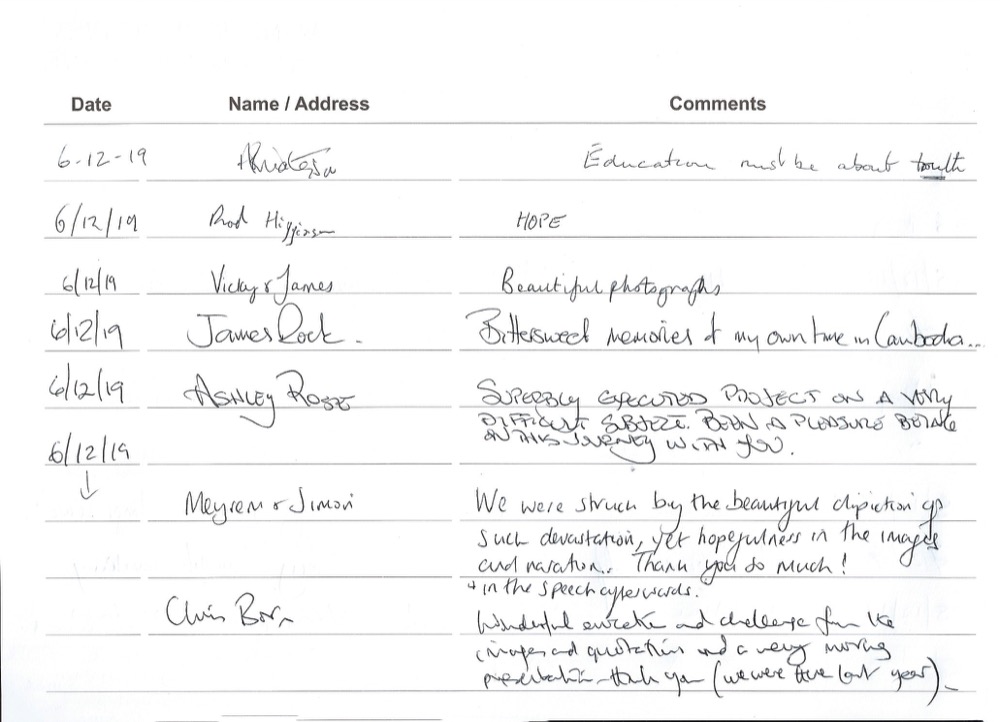 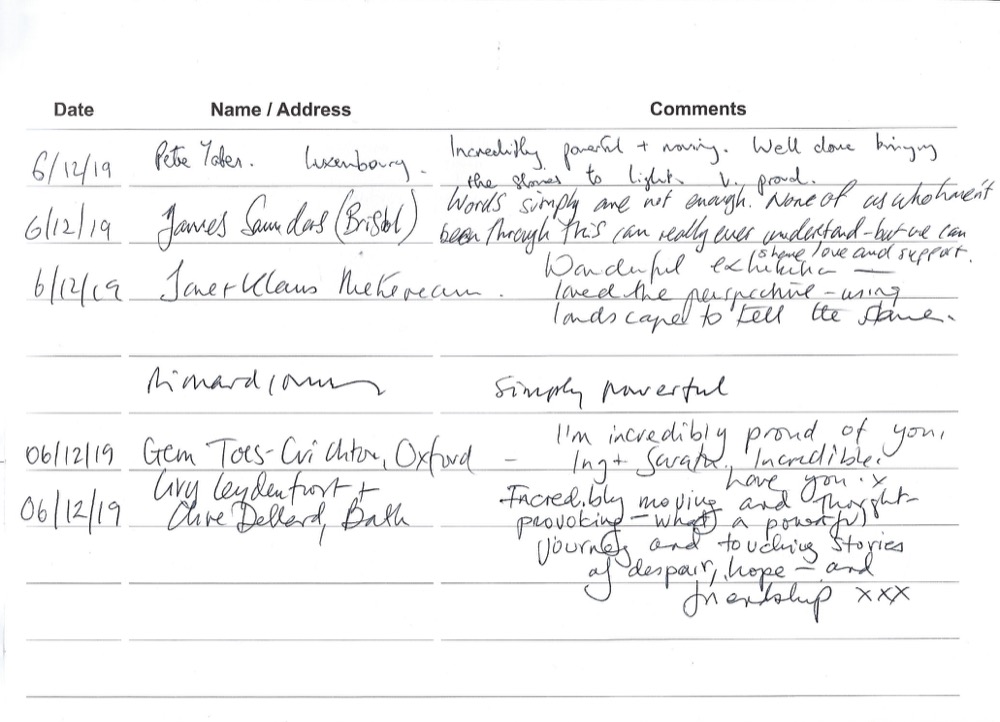 My social media accounts also seems to have had a traffic spike!