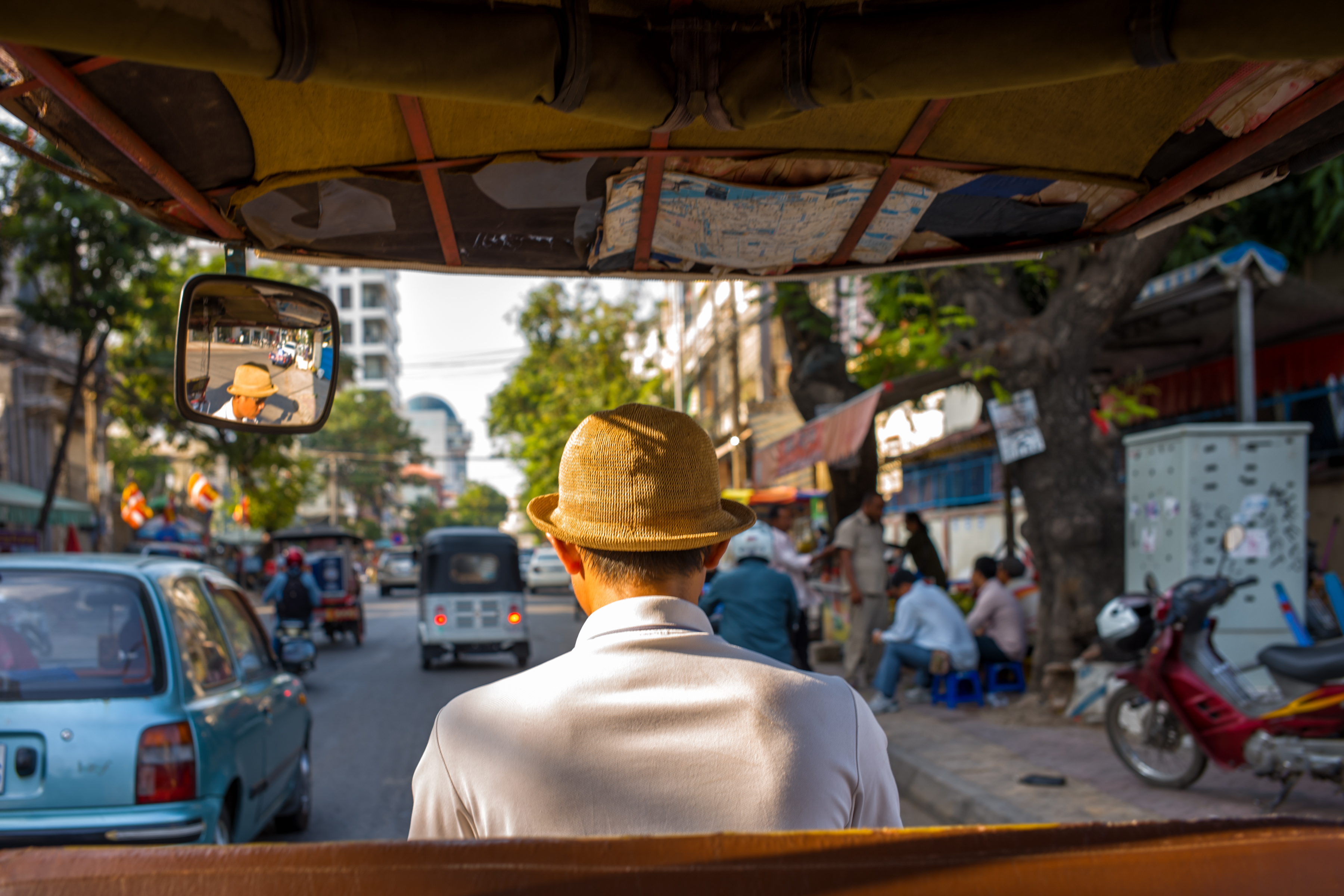 Within twenty four hours they emptied the city of around 2 million people, and declared Year Zero – back to a totally agrarian, socialist society. In the next 3 years, somewhere between 1-7 and 2 million people died, mainly from starvation and disease. But many were executed – often simply for being educated. It was genocide.

This is Mick Yates, and my project is about the Cambodian people that I know who survived that terrible time – and whose response was to put their entire life into teaching and education – the same education denied by the Khmer Rouge.

I have been a photographer most of life, and still have all of my negatives and slides going back to my teenage years. And like many other photographers I have tried lots of different genres. Probably travel photography, in its various guises, has been the mainstay.

I have been lucky to work and travel all over the world. In a current project, called ’75 Countries’, I am going through the archive to see what stories there are to tell. I can see that, to varying degrees, I have always tried to understand people going about their daily lives.

In undertaking the project, even before this MA, I had started to more properly research documentary photography.

I am obviously familiar with the ‘greats’, like Robert Frank and Walker Evans. Frank said “Above all, life for a photographer cannot be a matter of indifference”, and I feel the same way. I feel my photography should have a purpose, stronger than it has to date.

I am also very taken with the work of Adam Clark Vroman, who travelled the American West in the late 1890s / early 1900s. He took both landscape and portraits, aiming to be as ‘objective’ as he could. His careful, respectful images of Native American tribes was a stunning contrast to the often exploitative photographs taken by his peers.

More recently, I find myself drawn to the work of Hiroji Kubota, a Japanese-American Magnum photographer. His imagery of China and North Korea, from 1979, and his many trips through the mid 80s seem to me to exemplify a crossover between travel, documentary and journalism.

Kubota said “I think everybody has a great drama to talk about. Everybody”. He’s right!

Throughout my photographic practice, I have always been interested in colour. That’s perhaps because I used to paint.

I am especially intrigued by the work of Saul Leiter and Alex Webb. They use colour differently, with abstracted images on one hand, and layers of action on the other. Webb is a master story-teller, and a master of timing. Leiter, a master of light. As I develop my own practice, I want to go beyond how I currently see and use colour, to develop more of a signature style.

When travelling, it always seemed quite easy to make a connect with people, and take their photograph. Sometimes this allowed me to do fun street portraits, and sometimes something more important, like my work on the Sugar Daddy culture in East Africa, or the HIV Aids epidemic. For me, colour, light, and being able to move from the whole scene to the specific individuals in it are key. People are central to how I want my photography to continue to develop.

As I have begun to more formally understand my photography practise, I realise that ‘storytelling’, however peripheral, has always been part of how I have tried to shoot – looking for context, cultural and social clues.

And I find Gary McLeod’s notion of ‘rephotography’ critical to my project.

So let me turn to that project.

We first visited Cambodia in 1994. Unbeknownst to us at that time, part of the country was still under Khmer Rouge control, 15 years after Vietnam invaded Cambodia and stopped the Genocide. At the time, I was a tourist, though I did visit Tuol Sleng (the S21 interrogation centre) and Choeung Ek (the Killing Fields).

Subsequently, Ingrid and I developed an interest in all things Cambodian. In 1999 (after Pol Pot’s death) we were able to fund a reasonably significant primary school building program in Khmer Rouge areas. We did this in partnership with Save the Children (Norway) and the Provincial Education Office of Siem Reap. We went back many times, and I documented things in words and pictures.

Ingrid and got to know many of the ‘actors’, included some ex-Khmer Rouge. We were also able to broker two major grants from Japan to really expand the program.

As I started to think of the project for the MA, originally I was considering re-shooting how things had moved on, and re-examining my archives. But these first weeks weeks of the MA program have shown me that I need to do much more than that. I now believe that I did not do full justice to the people and how those years have affecting both their personal lives and Cambodian society as a whole. Even today, despite the best efforts of NGOs, the UN and various Government departments, education is not what it needs to be in Cambodia.

The central character to the story is a man named Keo Sarath. He, his mother and his sister – and his wife – all survived the Khmer Rouge, by hiding and living in the jungle. But 50 of his family died, including his father.

When we met him in 1999, he worked with Save the Children. He has dedicated his life to children’s education. And despite his most difficult personal history, he is always cheerful, with stories to regale about everything to anyone who will listen. He’s an irrepressible character.

This past week I was Sarath and his family, in Cambodia. We visited Tuol Sleng, where over 16,000 people were interrogated, forced to write confessions, and then were executed at the Killing Fields.

But this time I had a better glimpse into how Sarath himself viewed it all.

Part of the project is to ask the family to take photographs, with no direction from me at all. Tuol Sleng is a most somber tourist destination these days. As Sarath photographed, he was most taken with the images – the mug shots on the wall of those executed, and the pictures showing children labouring in the fields. He said that the eyes showed no hope, and he often sees that lack of hope, even today, in schoolchildren’s eyes. And he saw himself in the pictures of the child labourers.

His wife, Vanna, who was a student at the school before Tuol Sleng became a house of death, stood in her old classroom on the second floor, now full of tiny cells for the women imprisoned there. She told me later that she was reflecting on her lost education.

At Choeung Ek, the Killing Fields, visitors were mainly foreigners. Yet this time, it was very personal. Sarath described his feelings standing by the tower of skulls. We were looking at the terrible wires that bound prisoners before they were executed, shot, or bludgeoned with shovels or thorns. He described those bindings as a symbol that even today tie up the minds of the Cambodian people, holding them back.

Yet, at both Tuol Sleng and Choeung Ek, Sarath’s natural gift for education shone through. We talked to Cambodian school kids, explaining the history, and we talked with tourists, helping put more context into what they were seeing. As I said before, Sarath is irrepressible.

So, what will be in the project?

First, I need to understand the impact of history better, and visit in more depth the archive groups like the Bophana Audiovisual Centre and DC-Cam, in Phnom Penh. The project will certainly challenge my research (and possibly political) skills.

Second, I will need to retrace steps we took with Sarath and the others involved, in the heart of the countryside.

Third, I need to see what is going on in education today, including what Sarath is now doing. He has just left Save the Children (a long story) and is now with the Ministry of Education, in charge of national educational implementation.

There are many ways this project could go. At root, it’s about the linkages between the Khmer Rouge times, what happened to people, and how that impacted education longterm – seen through Cambodian eyes.

It could therefore be a largely biographical piece, about Sarath and his family.

Or it could be a more general documentary about education, and the still pervasive impact of the Khmer Rouge ideology.

To bring it alive, I am experimenting with video for the first time. As noted, I am also using images taken by Cambodians to incorporate in the work.

The end point seems pretty clear. I want to stage an exhibition in Phnom Penh, accompanied by a book – and then take it to whoever else will have it

I am not a journalist, and probably shouldn’t be to pull this off in Cambodia. But I do think I understand people. I am very excited about the project, though I realise it will be hugely demanding on my time and, frankly, resources.

The most important thing is that Sarath and his family are really excited about it all.

I thus see it now as not just a project, but as a responsibility.

Thank you for listening.