Today marks the availability of the so-called Super Deluxe version of The Beatles Revolver, which was first released 5 August, 1966. The reviews are all positive (so far), and I will not rehash them except to say that is is difficult to understate how different the album was at the time. Tomorrow Never Knows literally blew people away, and the cover by Klaus Voormann was a big deal (he won a Grammy for the art).

For me personally it is an important release, and I think still my favourite album of all time by any artist. I remember the day I got the mono vinyl, which I still have though it is rather worn.

It is no exaggeration to say that the music was on repeat everywhere. Extraordinary times, as only in May The Beatles had released Paperback Writer / Rain. In those days, singles and albums were quite separate.

I decided to go back and look at what else was going on in 1966. There was a Labour Government landslide election, England won the World Cup, white Rhodesia was a huge issue, as were protests against the Vietnam War. Spain was blockading Gibraltar. Pandas were mating, Longleat Lions entered our consciousness, the Kray’s were shooting people and Ken Loach started his journey to become a national treasure with Cathy Come Home. Credit Cards and ATMs were invented, Hovercrafts started service across the Channel, and electric train lines started to become the norm.

The saddest UK event was most certainly the Aberfan disaster, though a major BOAC plane crash also happened that year.

Time Magazine named the capital Swinging London, David Frost and Dr Who were on the telly.

As for me, well I was painting, trying all kinds of things and yet to settle on a style. Abstract was my main output, though our Grammar School art teacher (‘Chippy’ Heath) got me into cut-ups and more, often using the Sunday Times magazine which also introduced me to the world of photography via Don McCullin and others. I took up the camera seriously later that year. 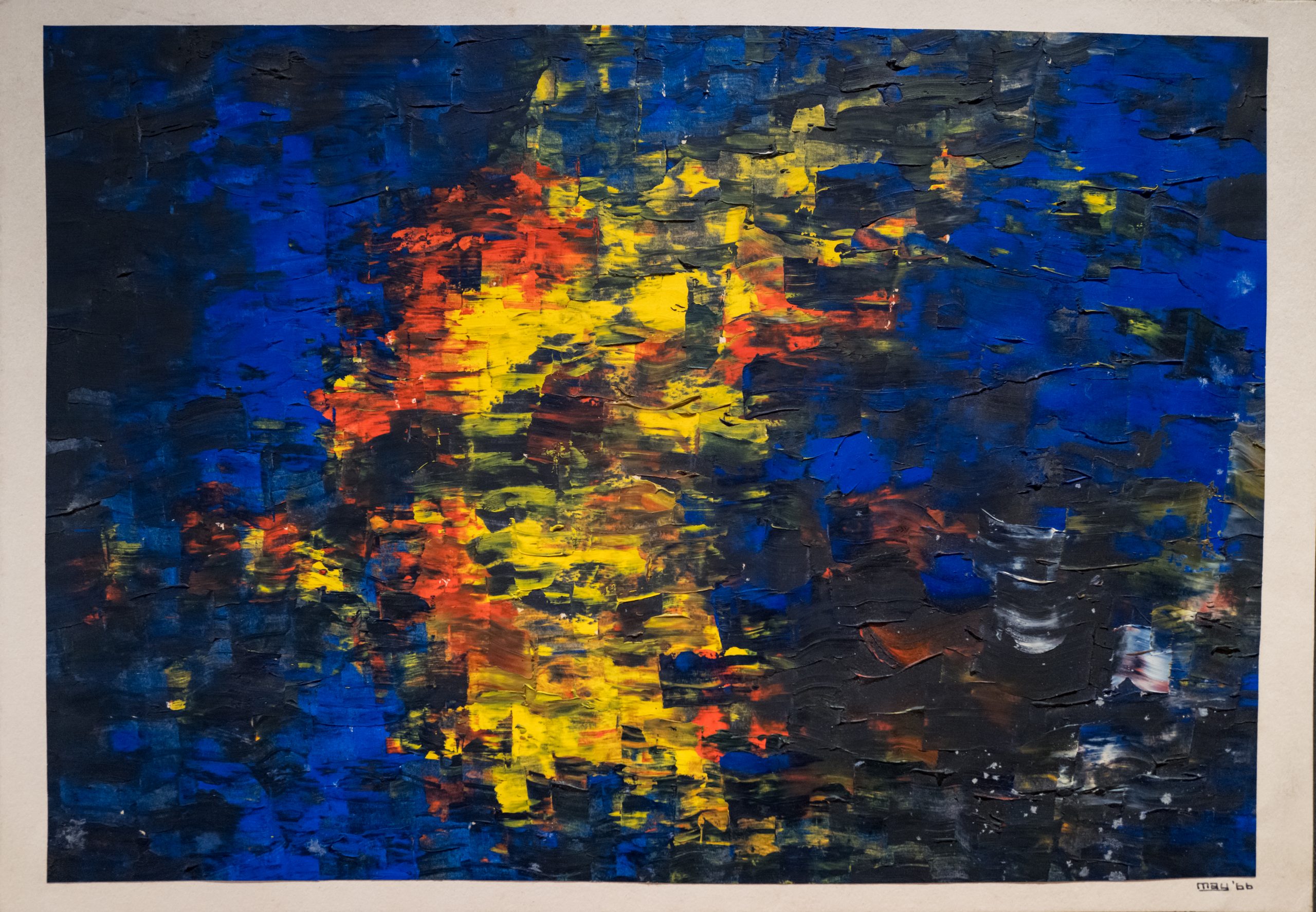 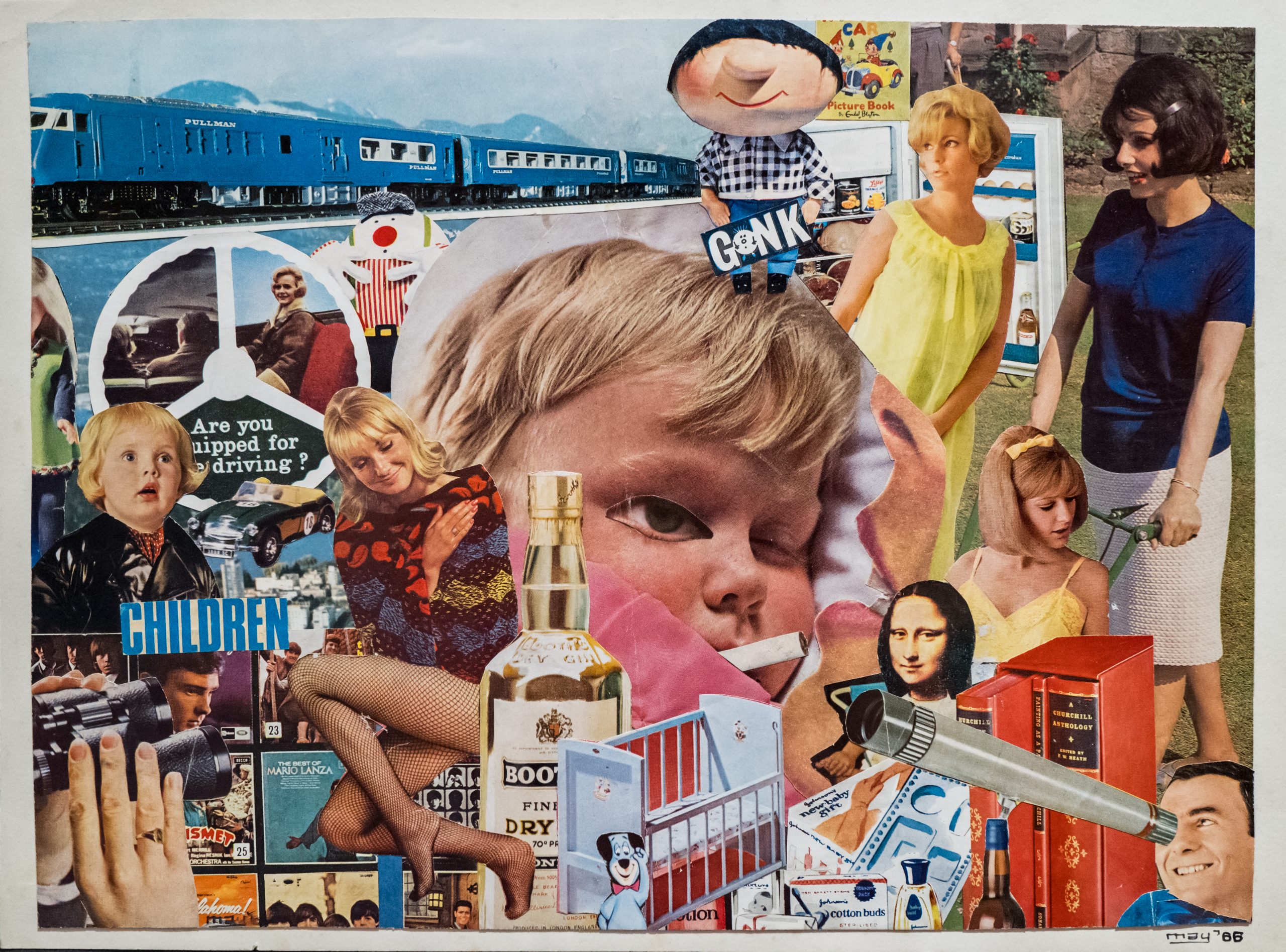 At school I was something of a swot (… don’t say anything … ) and O-Level results were released at the end of August. A bit incongruously, I was also a sprinter and relay runner in the Burton Grammar School Athletics team, something which did not survive my perhaps late discovery of all things rock ‘n roll that same summer (I was 16). 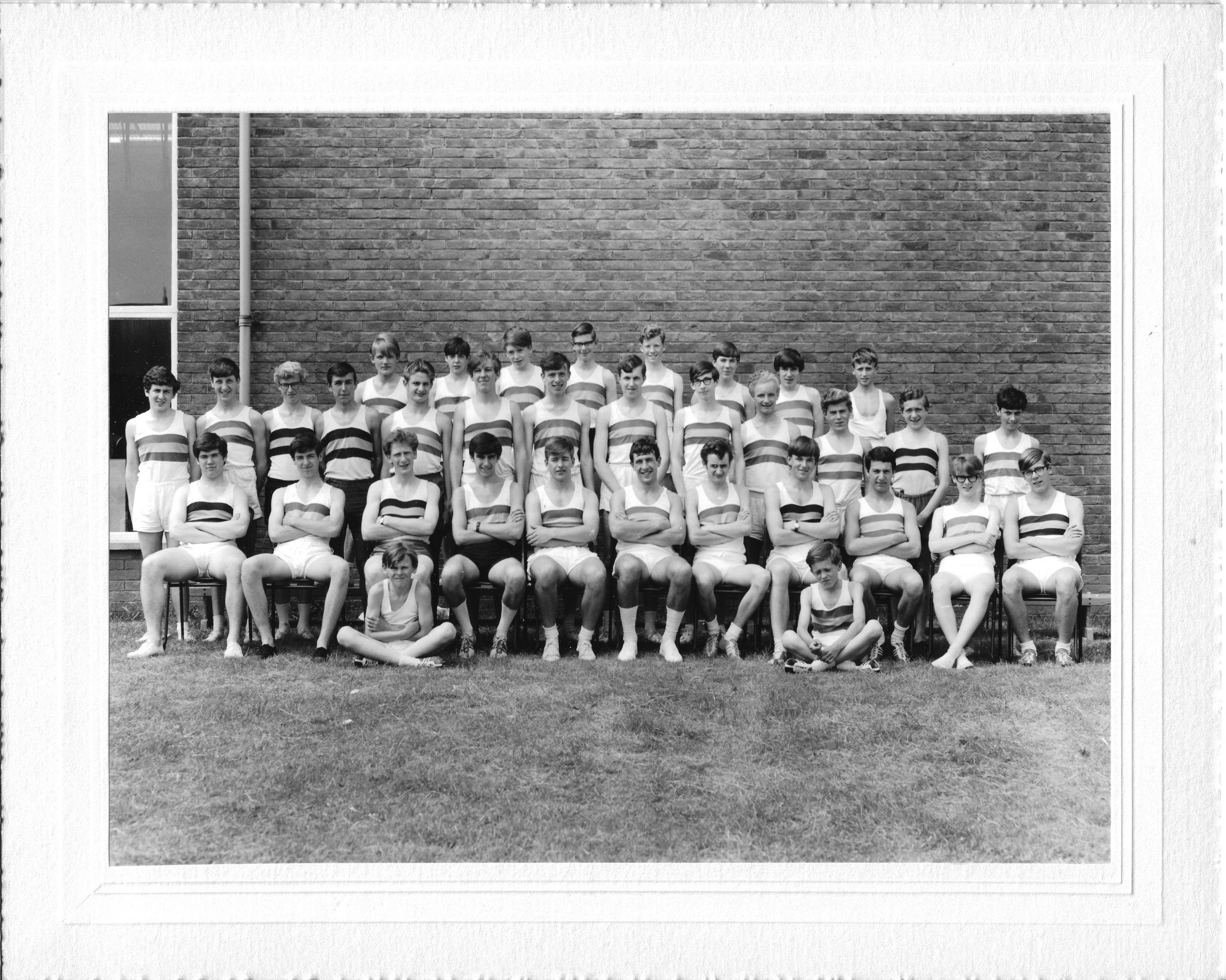 I have always been a hoarder (Ingrid is probably tearing her hair out as I write this), so I want back to my diaries of the time.

Well, on 3rd September my horoscope apparently foretold I would have a good time. That night was indeed party night. Revolver was on repeat, there was a seemingly endless supply of booze and other 60’s condiments, and I recall dancing to Good Day Sunshine with a young french lady. For a bumpkin like me who had never left the UK this was very exciting.

My diary tells when I got home, though I suspect that was a guess. 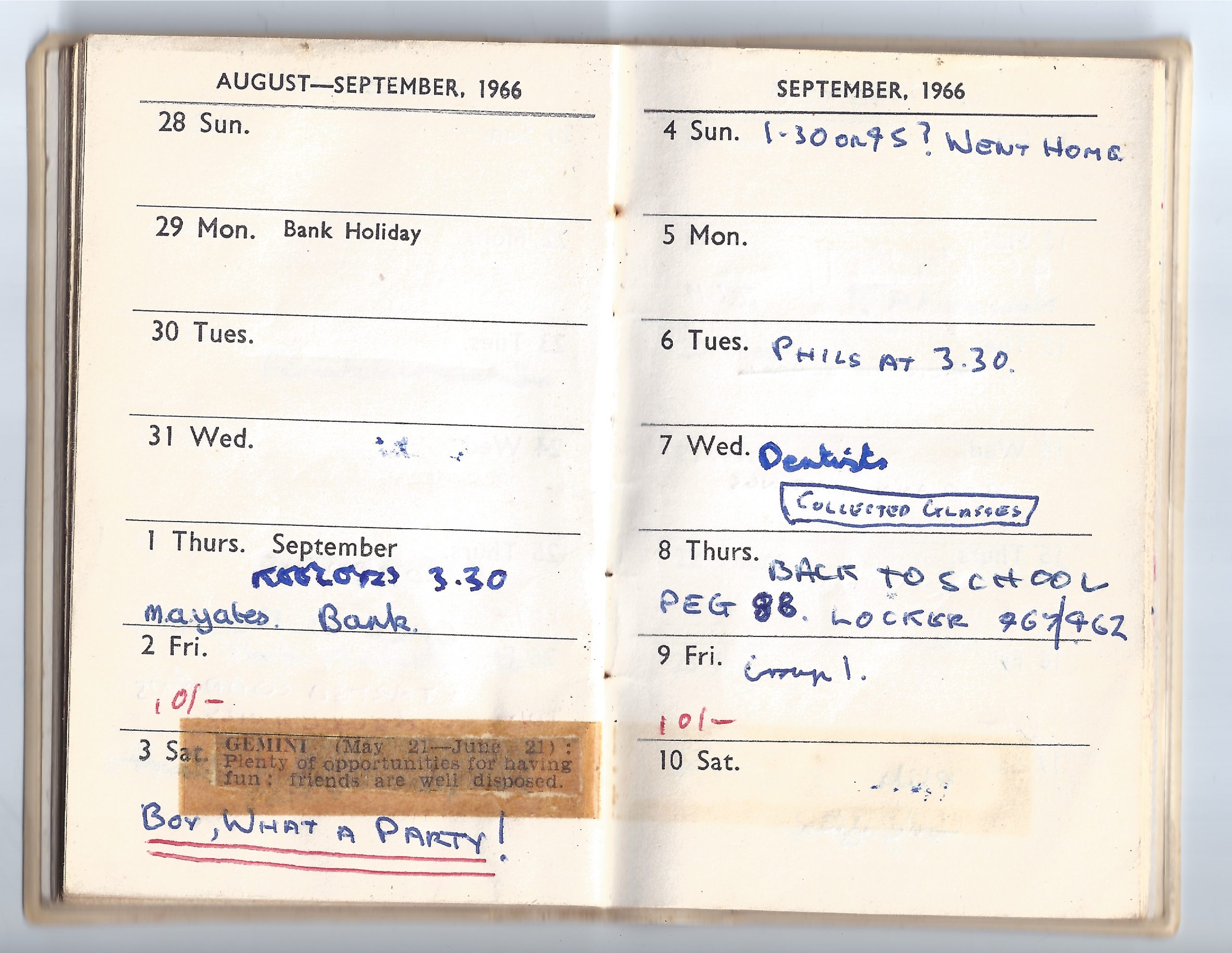 What else can I say?

1966 was a hell of a year, and Revolver anchored everything.

20 January – The Queen commutes the death sentence on a Black prisoner in Rhodesia, two months after its abolition in the UK.

1 March – Chancellor of the Exchequer James Callaghan announces the decision to embrace decimalisation of the pound (which will be effected on 15 February 1971).

5 March – BOAC Flight 911 crashes in severe clear-air turbulence over Mount Fuji soon after taking off from Tokyo International Airport, killing all 124 on board.

9 March – Ronnie Kray shoots George Cornell (an associate of rivals The Richardson Gang) at The Blind Beggar pub in Whitechapel, East London. Cornell dies in hospital, and Kray is convicted in 1969.

10 March – The Frost Report, which launches the television careers of John Cleese, Ronnie Barker and Ronnie Corbett and others is first broadcast on BBC One

11 March – Chi-Chi, London Zoo’s giant panda, is flown to the Soviet Union for a union with An-An of Moscow Zoo.

31 March – The Labour Party led by Harold Wilson win the general election with a landslide majority of 96 seats. At the 1964 election held just 17 months earlier, Labour had a narrow majority of five seats.

6 April – Hoverlloyd inaugurate the first regular hovercraft service across the English Channel, from Ramsgate to Calais.

7 April – The United Kingdom asks the United Nations Security Council to use force to stop oil tankers that violate the oil embargo against Rhodesia. Authority is given on 10 April.

11 April – The Marquess of Bath, in conjunction with Jimmy Chipperfield, opens Longleat Safari Park, with ‘the lions of Longleat’, at his Longleat House, the first such drive-through safari park outside of Africa.

1 May – The Beatles play their last conventional live concert in Britain, at the Empire Pool (Wembley) on the bill alongside The Rolling Stones and The Who.

2 May – Scottish inventor James Goodfellow obtains a patent for an automated teller machine using a plastic card and PIN.

16 June – The Beatles performed live on BBC television’s Top of the Pops for the first and only time, miming to Paperback Writer and its b-side, Rain.

3 July – 31 arrests are made after a protest against the Vietnam War outside the United States Embassy in London by around 4,000 people turns violent.

30 July – England beats West Germany 4–2 to win the 1966 World Cup at Wembley, in a game which attracts an all-time record UK television audience of more than 32 million.

1 August – The Colonial Office merges with the Commonwealth Relations Office to form a new Commonwealth Office.

21 October – Aberfan disaster in South Wales. 144 (including 116 children) are killed by a collapsing coal spoil tip.

29 October – Actor William Hartnell makes his last regular appearance as the First Doctor in the concluding moments of Episode 4 of the Doctor Who serial The Tenth Planet, regenerating into the Second Doctor played by Patrick Troughton.

16 November – BBC television drama Cathy Come Home, filmed in a docudrama style, is broadcast on BBC One. Viewed by a quarter of the British population, it is influential on public attitudes to homelessness and related social issues. It was written by Jeremy Sandford, produced by Tony Garnett and directed by Ken Loach.

20 December – Harold Wilson withdraws all his previous offers to the Rhodesian government and announces that he will agree to independence for the country only after the establishment of Black majority government. 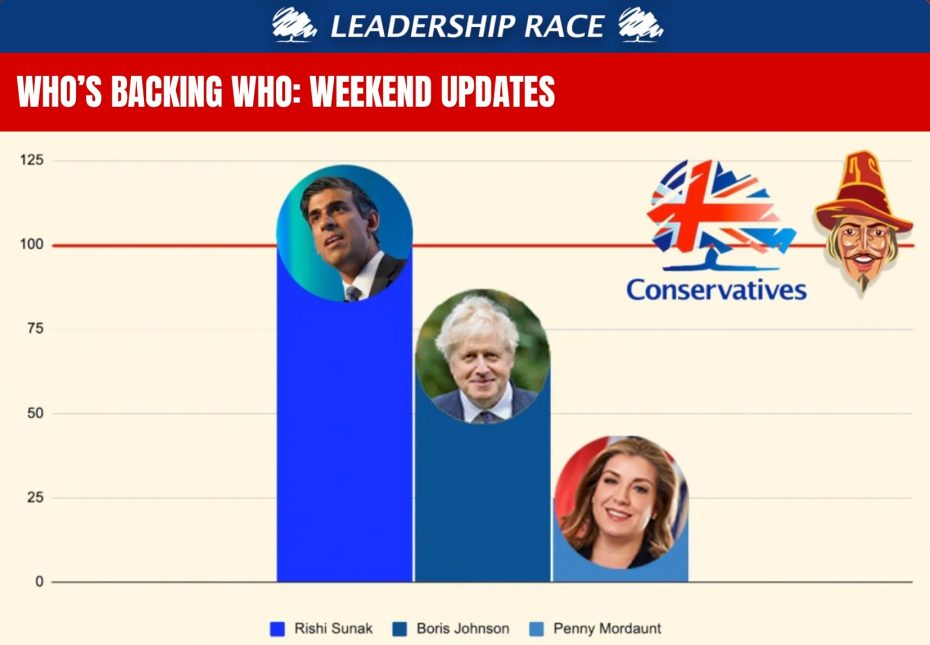 The public can only watch the continued machinations in Westminster with horror. We can complain, but the many are at the total mercy of a tiny few. Only a few weeks ago Johnson couldn’t hold onto his cabinet. A proven liar and a lazy self-server, now he’s a hero in the wings. What utter crap. Integrity seems an old idea.

Objectively whoever ‘wins’ the Tory leadership is going to be divisive and disliked. So many factions, so little chance to unify. To me the question absolutely should not be how the party holds onto power. It is not about whether Johnson would be a better vote winner than Sunak. It is what is best for the UK, for everyone in the country.

Politics is the art of the possible, and the clown cart of the past years has shown that they can’t handle even what is possible. Tax cuts without a plan, levelling up with no money, promises (the NHS?) with no delivery, one of the worse Covid death rates etc. etc.

No wonder we have a lettuce as a national hero, and the world sees the UK as fast-approaching 3rd rate status with a now negative financial outlook. And no, I am not talking the country down. The Government made it so.

For anyone with democratic beliefs, a General Election is the only way out of this, and then we all have to suck it up on the result. Whoever wins needs to get to work for the entire country and cut the puff and bluster.

Though I would be labelled a ‘progressive’ today, left of centre, I’m not a member of the culture wars ‘tofu eating wokerati’. As a long time business person, I’m a comfortable member of the British middle class. I’d benefit from tax cuts. But that is just not right for society as a whole. We need better services and infrastructure – that is where growth can come from. Having lived in Singapore, that oft-vaunted bastion of low tax and free enterprise, their services and infrastructure make the UK look like a developing nation.

Frankly, I just can’t stand the shit-show that is the current Tory party. They have had 12 years and look where we are. They are a disgrace. Incompetent. Unprincipled. An embarrassment. It really isn’t possible to be any worse. Simple as.