It is premature to know what is going to happen because of the disastrous Putin invasion of Ukraine, though one thing is easy to predict – many innocent people are going to die on both sides because of that man’s appalling 18th century imperial ambitions.

As an aside, it is equally appalling that Farage blames NATO and Trump thinks it’s a good move by Putin. Whilst that says a lot about them, their craziness is not new and not my main point.

Going back to certainties, a second is that Cyberwarfare will intensify on all sides – today Anonymous joined in, rather an unholy coalition with GCHQ, NSA, ANSII, NATO CCDCOE and others. What a time to be a hacker, and I hope they are all good enough. Just when we have all gone cashless, imagine no ATMs?

A third certainty is the return of the Cold War. If Putin annexes Ukraine, Cold War (likely, though as I write he apparently is open to negotiate, maybe because of Chinese pressure).

If a war of attrition ensues, aided by Western weapons, Cold War (possible). If Putin ‘strategically’ withdraws licks his wounds and tries again, Cold War (unlikely though possible). Of course Ukraine could win the war, and kick Putin out. Given the inequality in armed forces, that would be quite something.

Still, in all scenarios Putin has put Russia on the other side of that old curtain (certain) which will be very hard to shake off.

Maybe if Putin gets ousted by the Russian people, then no Cold War happens (possible but too hard to predict).

Let’s hope that NATO doesn’t fire weapons, then it is no longer a Cold War but instead we get WWIII (unlikely). Though as I write, Putin is threatening Finland and Sweden if they accede to NATO. The fact is that if Ukraine was in NATO, Putin wouldn’t have invaded and Russia would be at peace.

So a new kind of Cold War seems inevitable, which makes me think about who experienced the last Cold War and what it was actually like.

I was a kid, and I remember the air raid siren drills. I remember the Cuban Missile crisis (I was 12). I remember talking to friends about war with China (maybe I got that slightly wrong, but you see my point). I also remember the pamphlet ‘Protect and Survive’, finally made public in 1980 (yup). How to survive a Nuclear War. That pamphlet had its origins in 1963’s ‘Advising the Householder on Protection against Nuclear Attack’, a snappy, inspiring title which I also recall.

I remember hearing that my home town, Burton on Trent, was on the nuclear targeting list as we sat neatly between two major power stations.

Anyone my age will also remember Peter Watkins’ ‘The War Game’, a 1966 British pseudo-documentary film that depicts nuclear war and its aftermath. It was banned by the UK Government before its planned screening on the BBC in 1965. We all knew about its existence, though, as it premiered at the National Film Theatre in London in 1966.

That was the same year that my favourite album of all time was released, The Beatles’ Revolver. Interesting contrast.

Finally, I recall looking to buy a cottage in Cumbria in the early 70s, until we discovered that Sellafield was way too close. We didn’t buy.

In other words, the Cold War was ever present, and it was rarely far from our minds even on good days.

Fortunately it has not been in anyone’s minds since 1989 when the Berlin Wall fell and the Soviet Union crumbled. I was in East Berlin in 1986, so I had a bit of a view of how things were before that fall.

It is hard to see a return to the 60s and 70s, as the world today is so interconnected. We all now know what Swift is. We all have multiple information sources (thank Sir Tim for that).

But then I also never expected to witness a full blown invasion of a democratic, sovereign country happening in Europe in my lifetime. A World War seems unthinkable as everyone looses. Still, Cold War seems to be back with a vengeance.

All of our thoughts and hopes (I don’t pray) go to the Ukrainian and Russian people who are caught up in this madman’s dreams. Dark days indeed.

The Farm Security Administration (FSA) was a New Deal agency created in 1937 by Roosevelt to combat rural poverty during the Great Depression in the United States. It succeeded the Resettlement Administration (1935–1937). The FSA is famous for its photography program of 1935–44 that portrayed the challenges of rural poverty. Roy Stryker led the program.

In a fascinating twist, I have a copy of The Leica Manual, a book edited by Willard Morgan and Henry Lester, first published in 1935. The copy I have is the 8th edition, from 1942. It has 558 pages, and covers everything from how to take photographs with a Leica, film developing, and all manner of practical applications. What is perhaps of most interest is a chapter authored by Roy Stryker and Edwin Locke (noted in the book as being with the Farm Relief Administration).

The chapter is headed ‘Education Through the Eye‘, which features photographs by Rothstein, Jung, Lange and Shahn. It references the images as being courtesy of the Resettlement Administration, the early name of the program, contemporaneous with the first editions of the book. It also has photographs taken by Alfred Eisenstaedt, then working with Life Magazine, mainly to illustrate points on relevant factory and farm technology. The overall aim is to link photographs together to present a compelling social narrative.

As I read the chapter, I’m struck by how modern it is. Stryker and Locke cover idea selection, effective verbal storytelling, impactful page layouts, audiences, slide presentation technique and documentary film making. All stand scrutiny today as excellent practices in storytelling, and, dare I say, audience persuasion. Whilst the chapter is pitched as ‘school education’, at the end the authors make clear how they see their approaches as appropriate for all audiences that need to understand new things – in this case, the plight of the farmers in the depression, and the support being offered by the US Government – effective social propaganda.

There is also a fascinating description of the layout of the page which introduced Lange’s famous ‘Migrant Mother‘, tracing how the eye moves across a two page spread to deliver maximum audience response to the Mother.

I am reproducing all of the pages of the chapter. Click on each if you would like to study a larger copy. 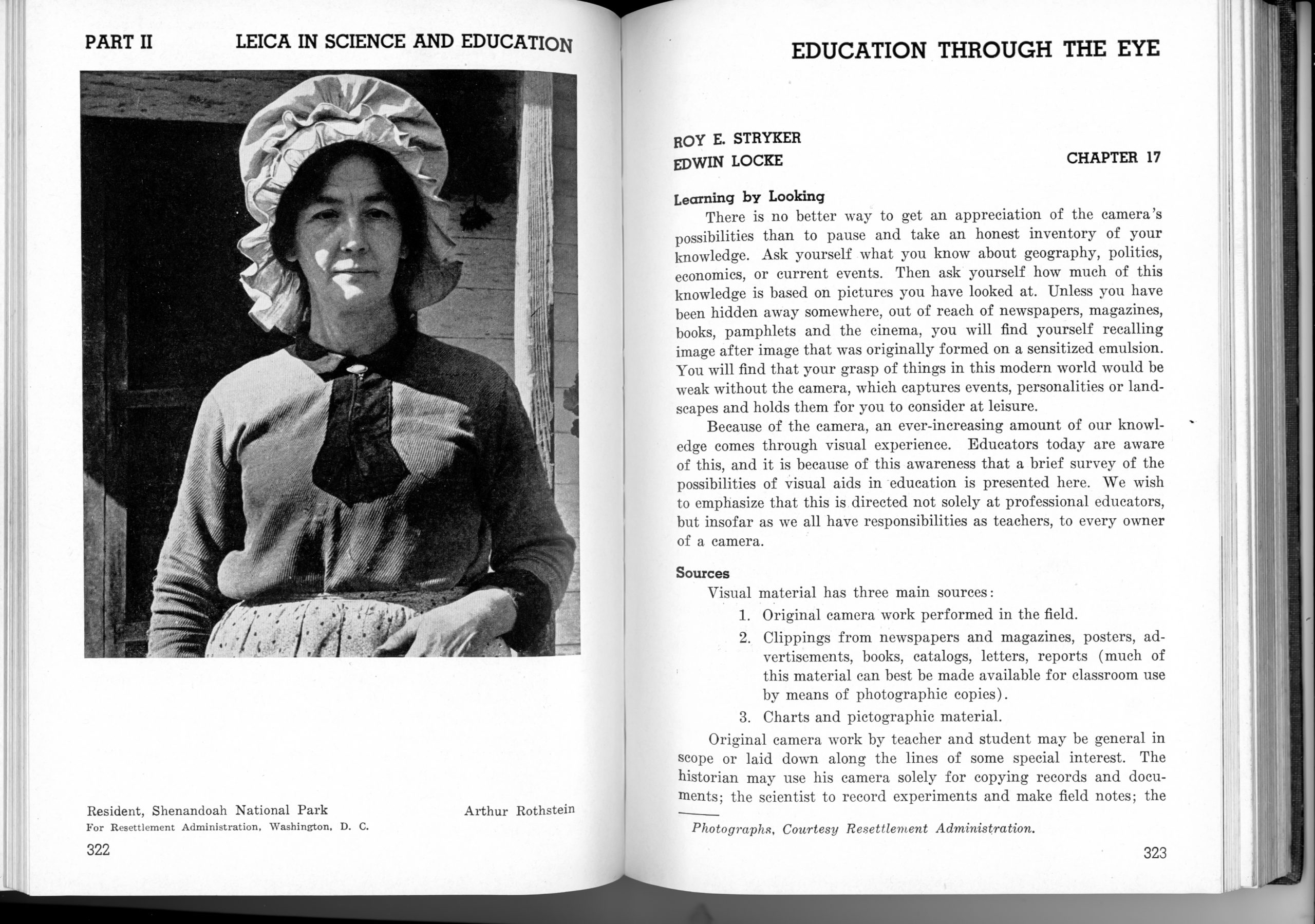 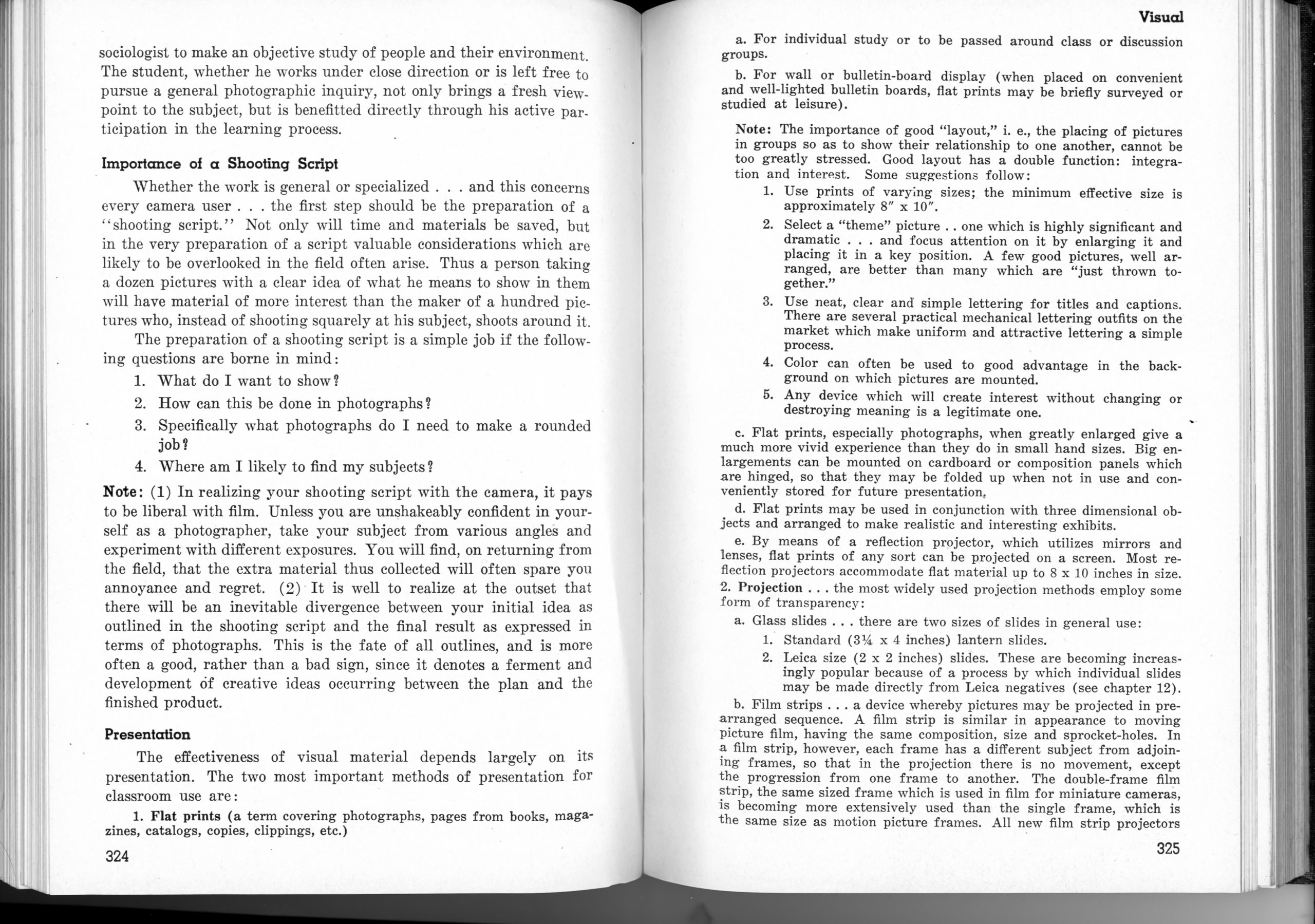 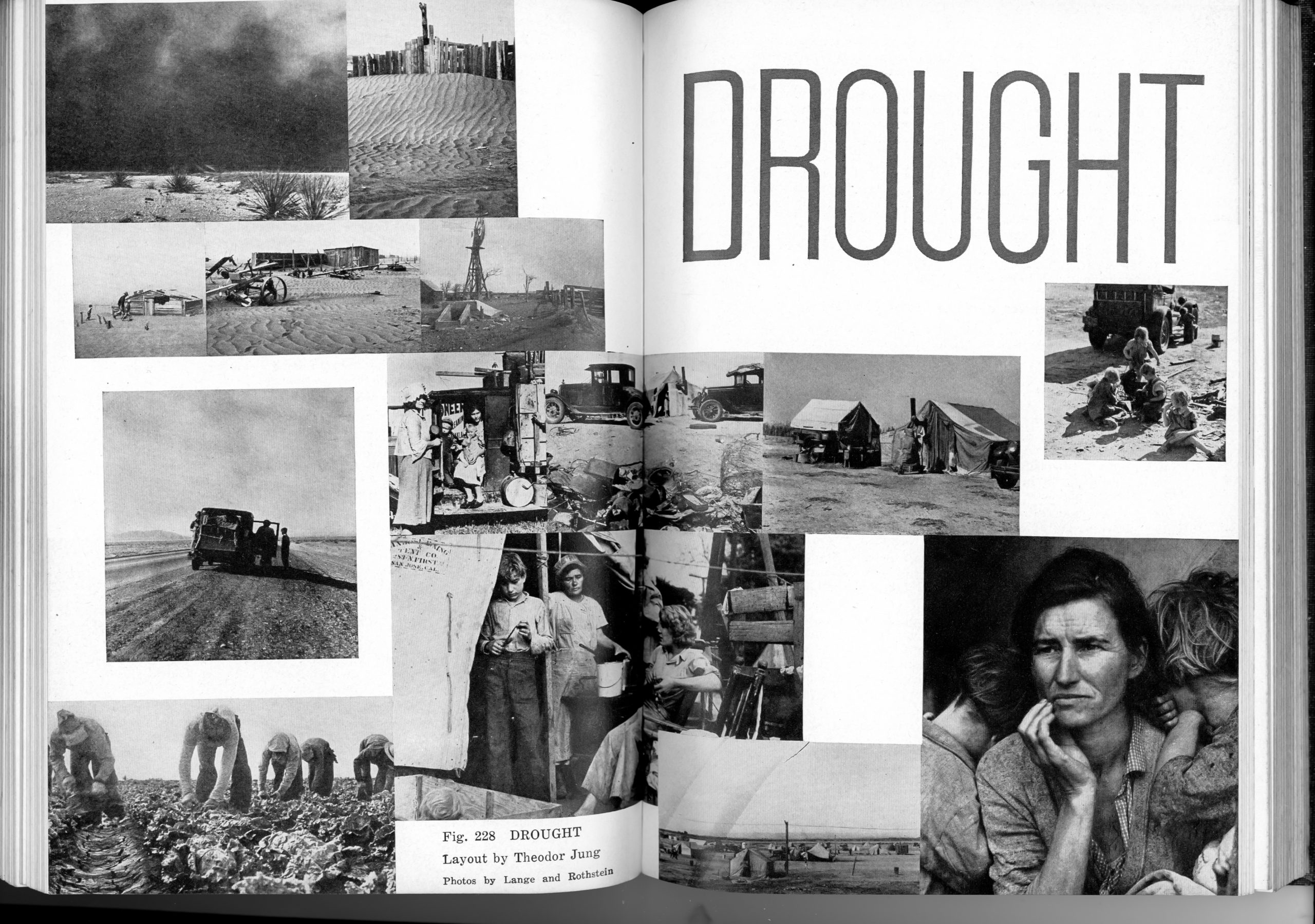 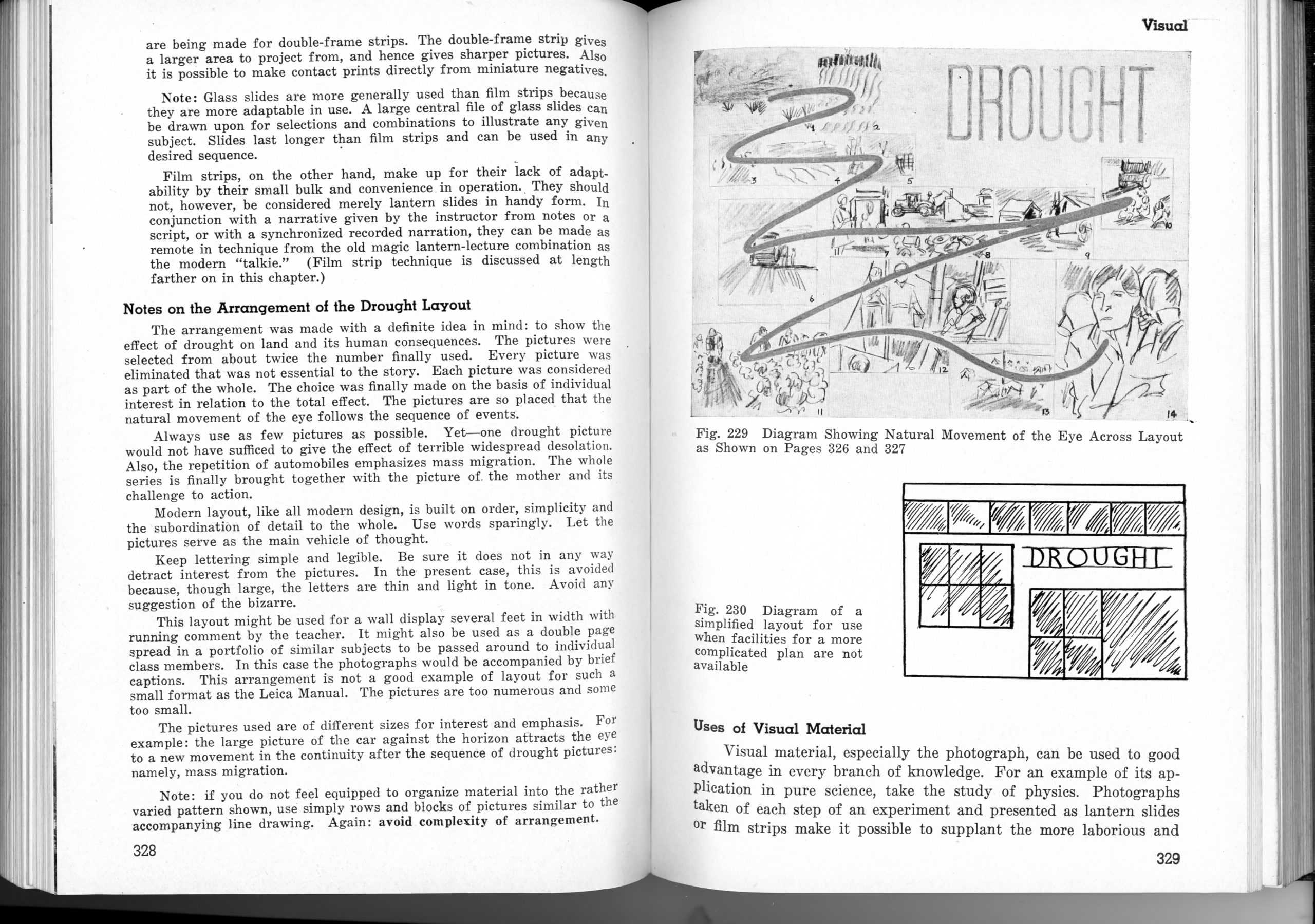 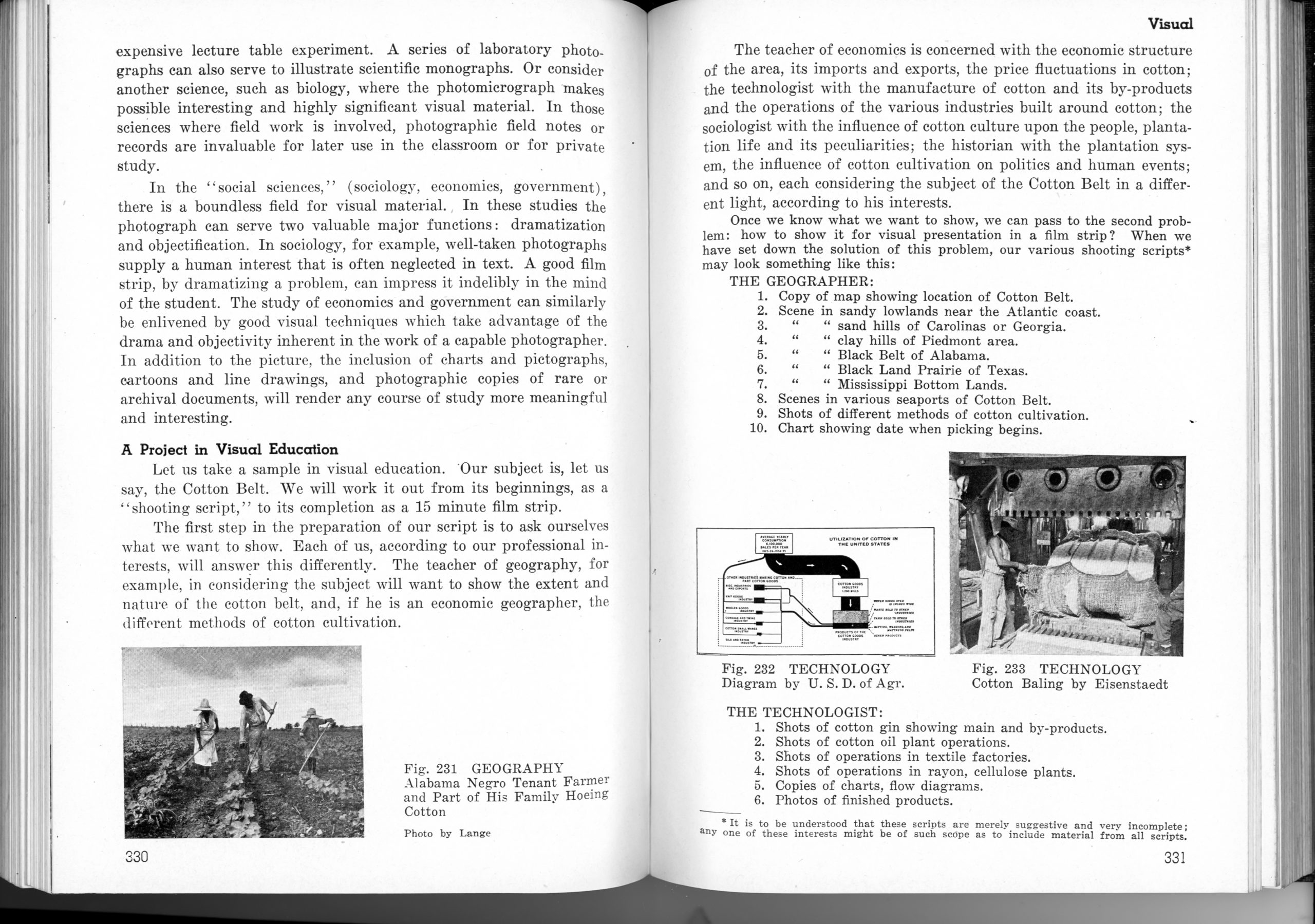 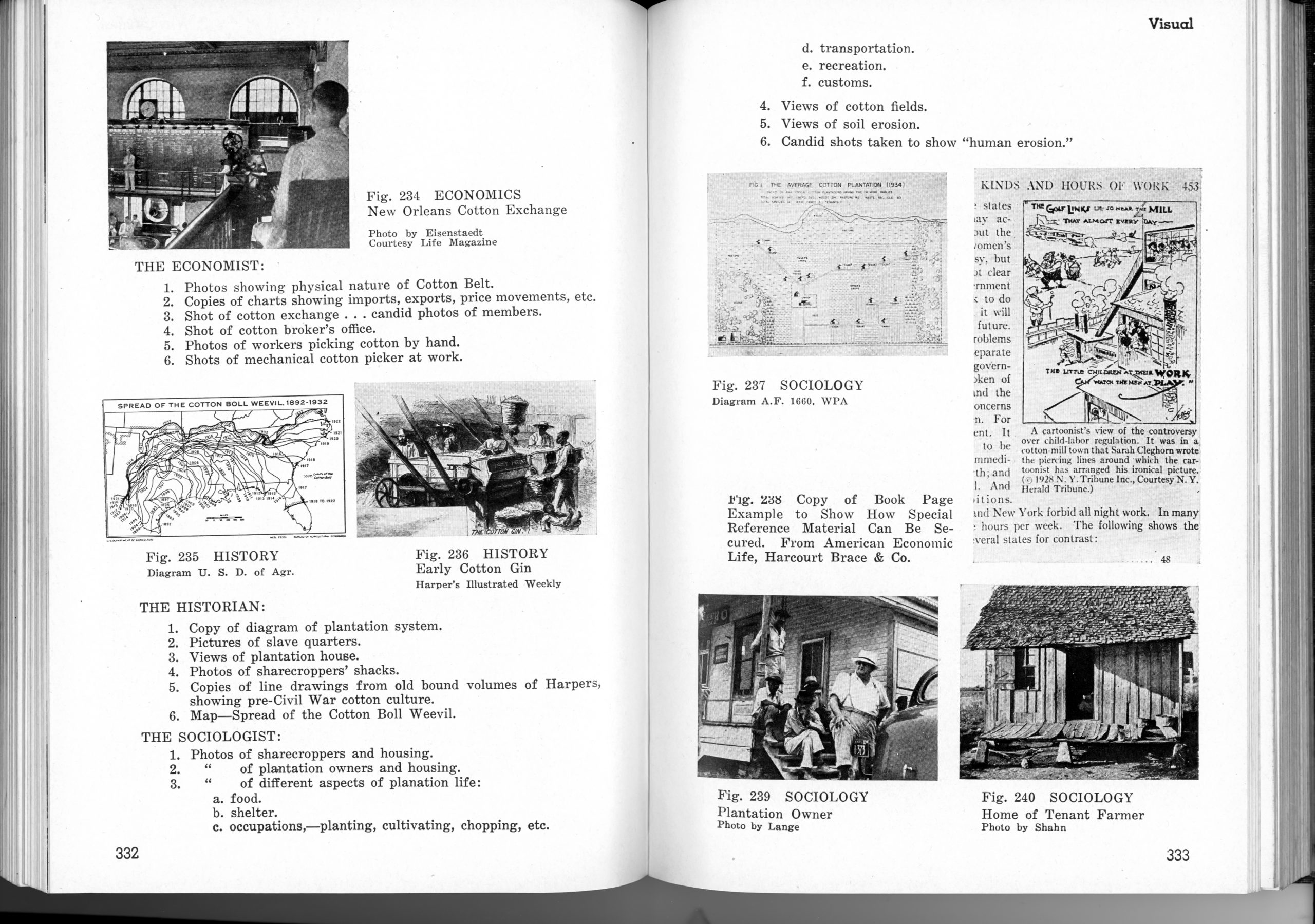 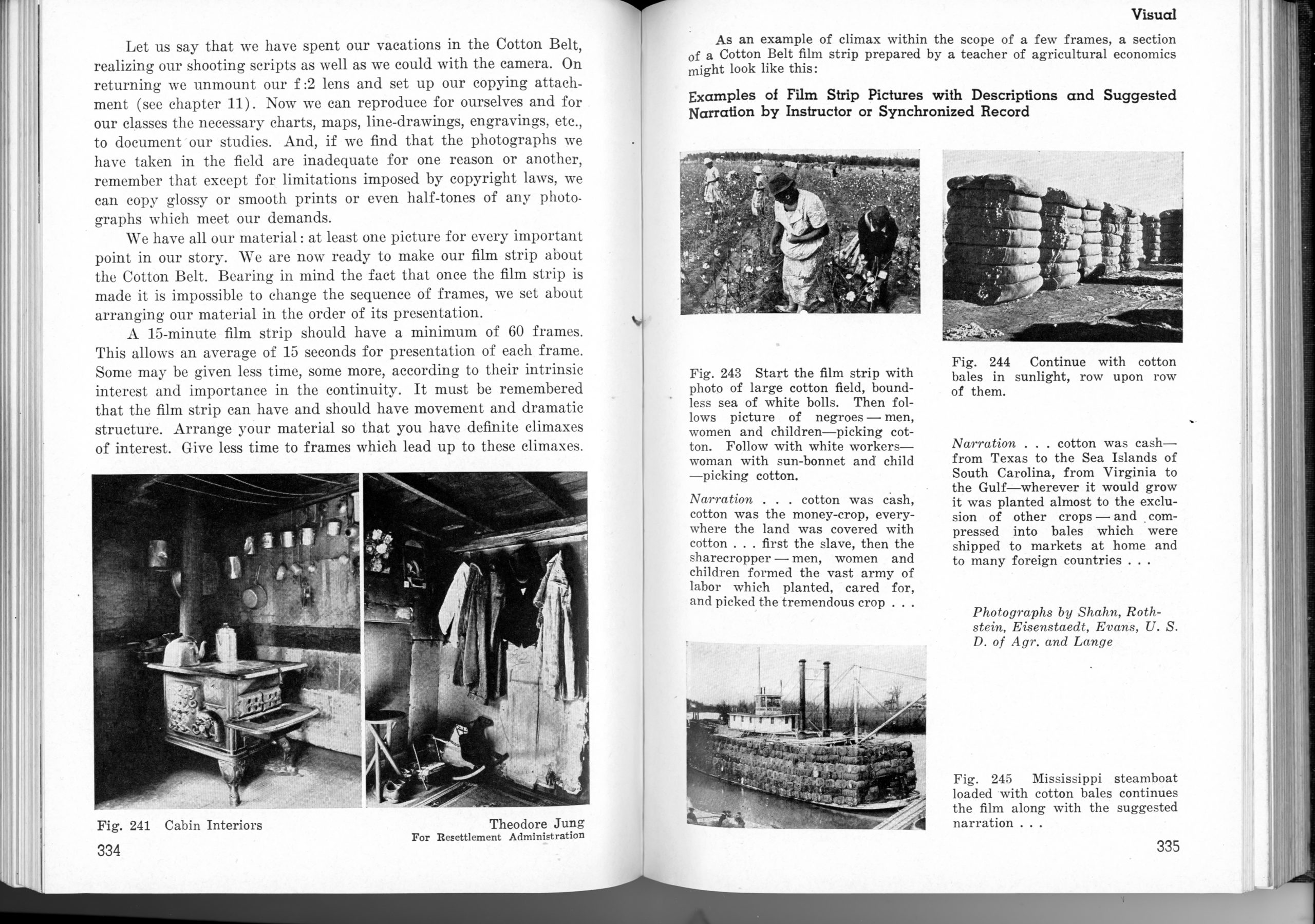 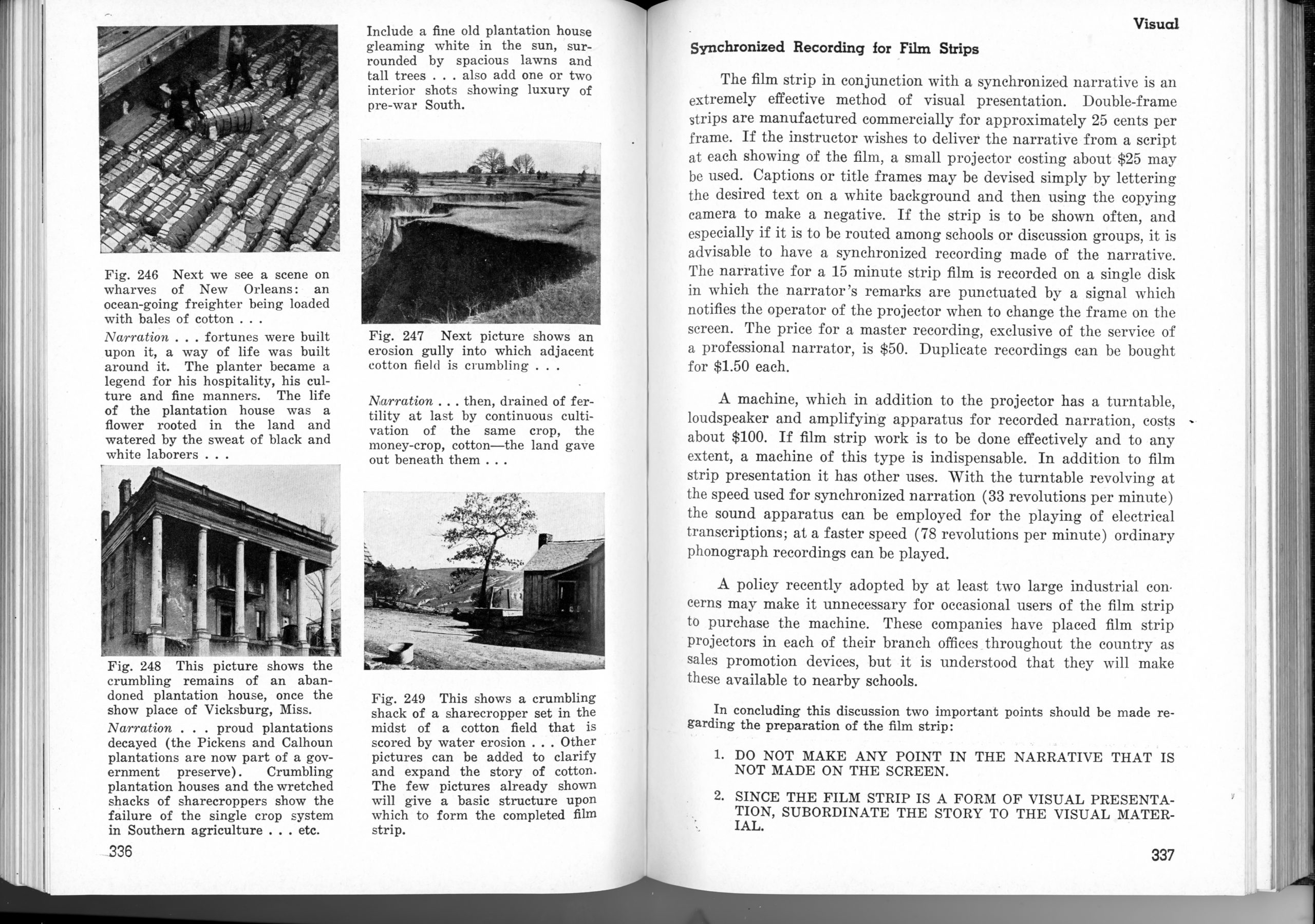 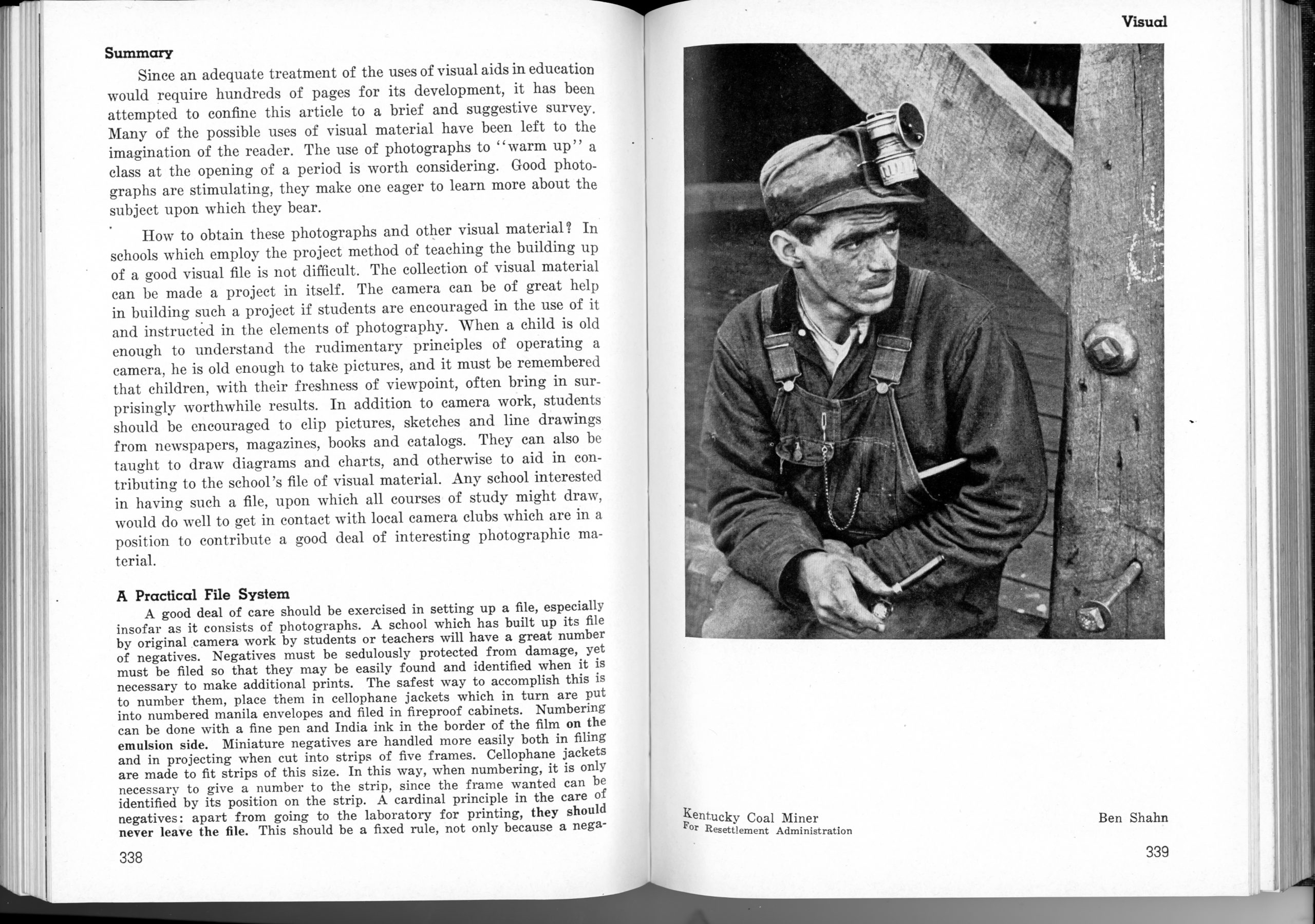 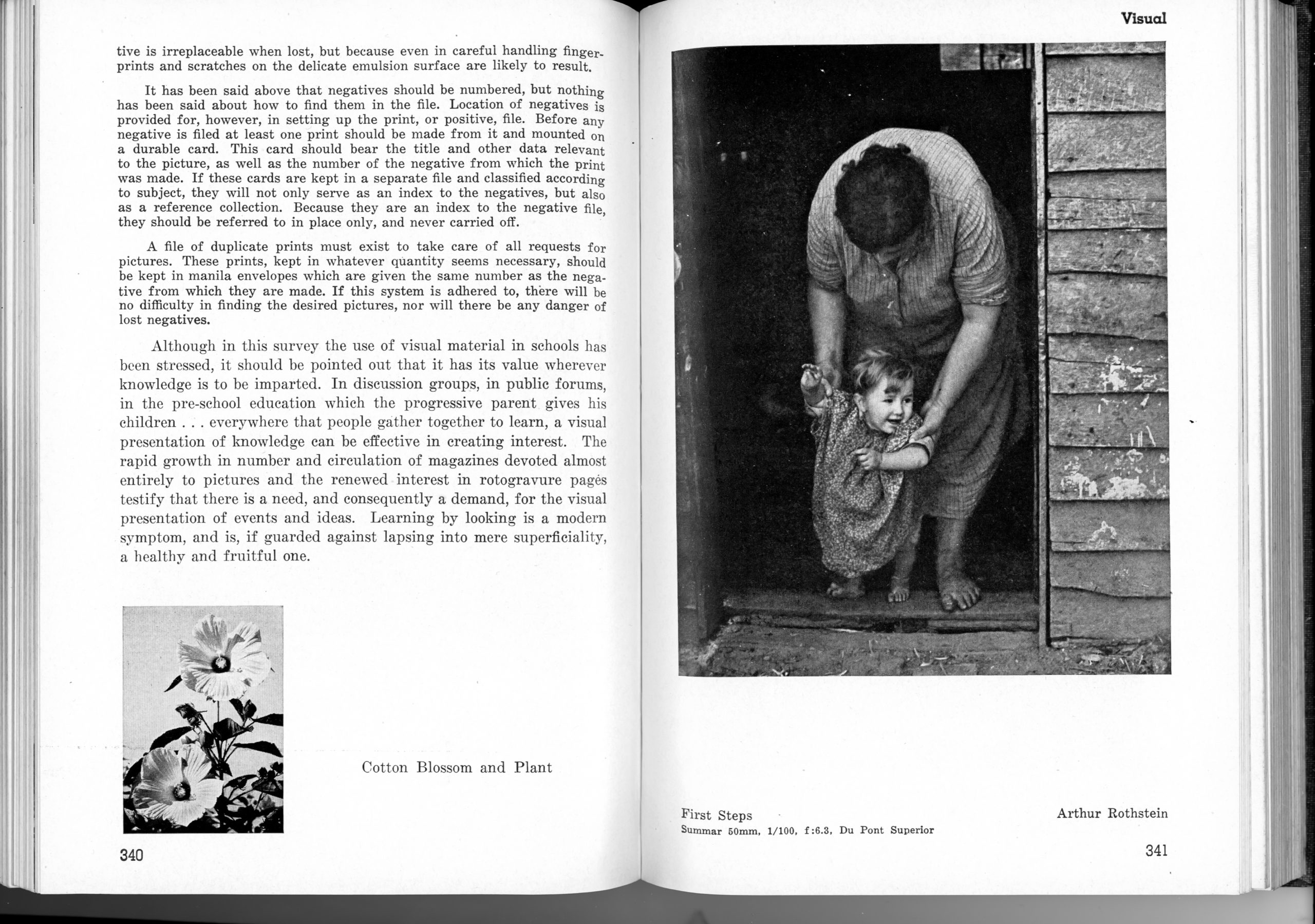 It is perhaps no wonder that the work of the FSA photographers is both so well known today, and so highly regarded. Stryker and Locke’s approach to documentary narrative and visual persuasion was compelling, showcasing the images and driving home the message they wanted to deliver.