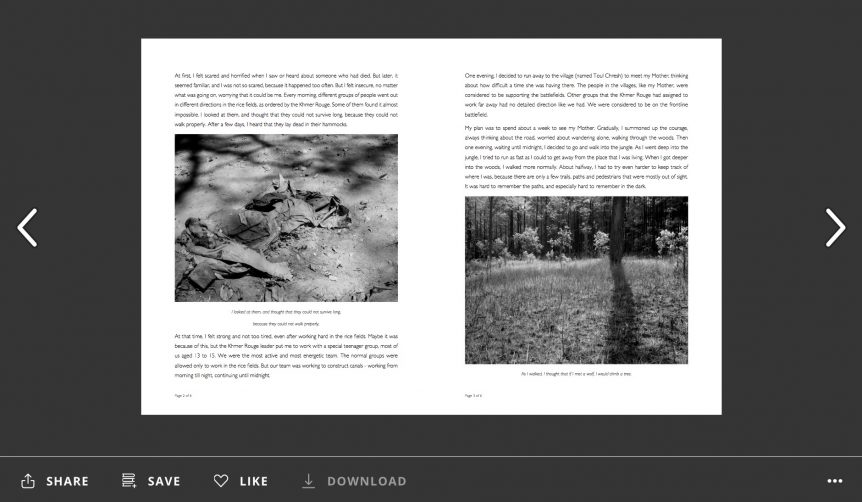 I have started thinking about Wendy’s challenge – to create mini-portfolios of the Unfinished Stories – to help the creative juices flow, look at ways to build portability into my work for the future, and to offer ‘take aways’ at the BRLSI Installation in December.

I have used Issuu before. So, I have uploaded one of the stories as I handed it out in the Arles review, to start the process of exploration.

I have only a basic account, which limited possibilities so I cannot embed the document in this page. But I want to explore before spending yet more money.

I have also used exposure.com, for a WIP and for Landings 2018.

I find it a great platform. So, I have taken that same story and created a draft.

Some of the ‘parallax’ effects do not work in the embed, but here it is, also.

Akeo’s Mother Passes Away by Mick Yates on Exposure

I am going to share these in a peer review with Krishna w/c August 19. 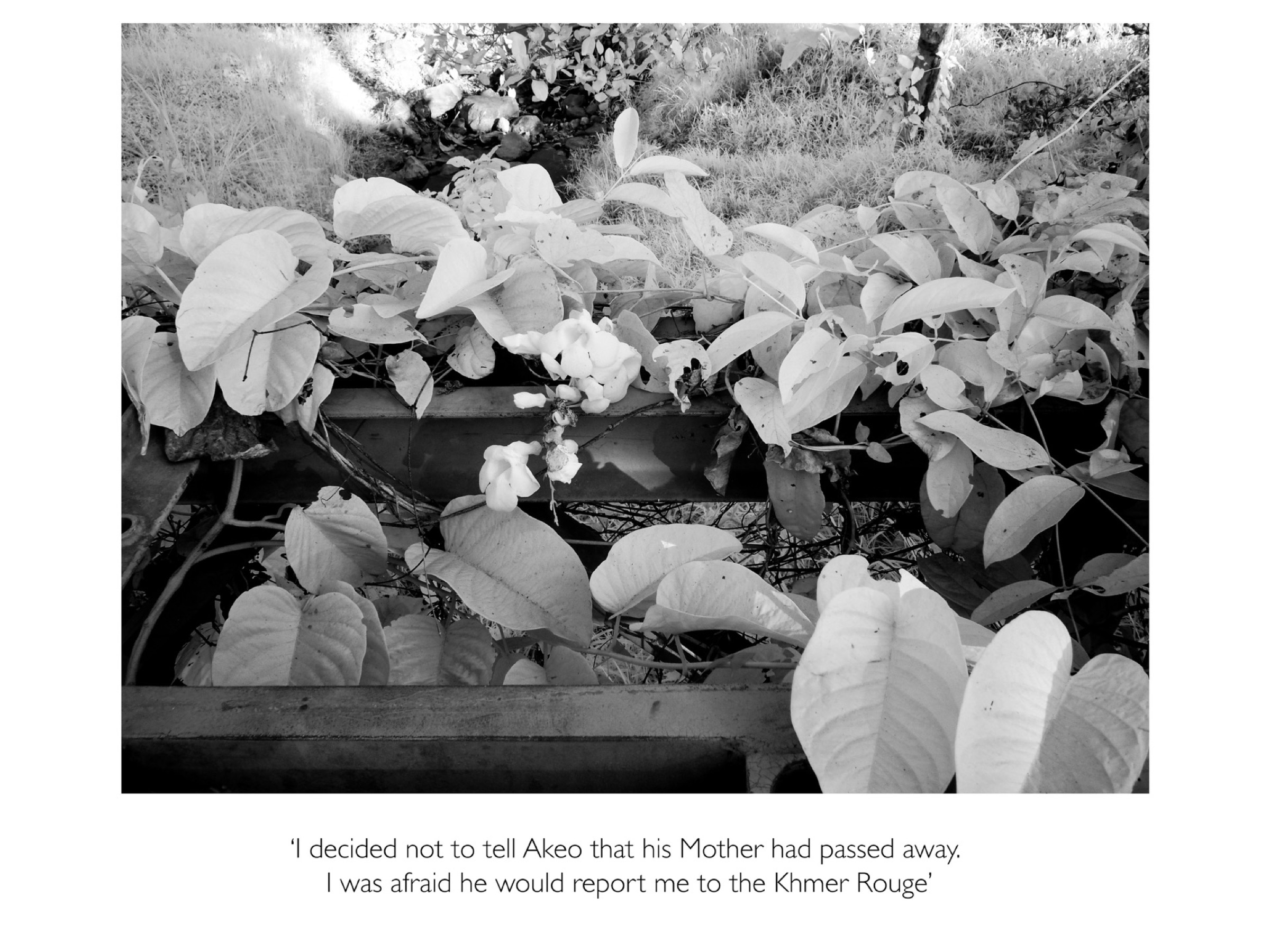 It was possibly in 1977, I do not know for sure, but it was a windy month for Spring, and rainy. I felt so desperate to see my Mother, to find out how she was being treated, because people died every day. I was a member of a children’s group, with about thirty children in it. No one had yet died in our group to that point. It was the adults, known as the ‘older groups’, who had had an epidemic, mostly leading to swelling and diarrhea.

At first, I felt scared and horrified when I saw or heard about someone who had died. But later, it seemed familiar, and I was not so scared, because it happened too often. But I felt insecure, no matter what was going on, worrying that it could be me. Every morning, different groups of people went out in different directions in the rice fields, as ordered by the Khmer Rouge. Some of them found it almost impossible. I looked at them, and thought that they could not survive long, because they could not walk properly. After a few days, I heard that they lay dead in their hammocks.

At that time, I felt strong and not too tired, even after working hard in the rice fields. Maybe it was because of this, but the Khmer Rouge leader put me to work with a special teenager group, most of us aged 13 to 15. We were the most active and most energetic team. The normal groups were allowed only to work in the rice fields. But our team was working to construct canals – working from morning till night, continuing until midnight.

One evening, I decided to run away to the village (named Toul Chresh) to meet my Mother, thinking about how difficult a time she was having there. The people in the villages, like my Mother, were considered to be supporting the battlefields. Other groups that the Khmer Rouge had assigned to work far away had no detailed direction like we had. We were considered to be on the frontline battlefield.

My plan was to spend about a week to see my Mother. Gradually, I summoned up the courage, always thinking about the road, worried about wandering alone, walking through the woods. Then one evening, waiting until midnight, I decided to go and walk into the jungle. As I went deep into the jungle, I tried to run as fast as I could to get away from the place that I was living. When I got deeper into the woods, I walked more normally. About halfway, I had to try even harder to keep track of where I was, because there are only a few trails, paths and pedestrians that were mostly out of sight. It was hard to remember the paths, and especially hard to remember in the dark.

‘As I walked, I thought that if I met a wolf, I would climb a tree’

As I walked, I thought that if I met a wolf, I would climb a tree. The howls gave me the idea that the Khmer Rouge were talking. As a wolf sounded closer, I tried to get closer to the trees, and move quickly from tree to tree, thinking that if I meet it, I can climb up the trees right away. I spent almost the whole night in the jungle, until I got to a field which I remembered was close to my Mother’s village. I had gathered things there, with my Mother, for our thatch-roofed hut. Not far from there I knew there were mass graves. Most of the ‘New People’, from the towns, had died, mainly due to illness and hunger. I did not have any fear of becoming such a ghost, but, just as before, I was always afraid to be in the dark.

In the morning, I approached my village. It was strange and hard to recognise, because originally many huts, about 20, were built in two rows of ten huts. Now there were only three left, along with our hut. Looking from a distance, I saw my Mother in the hut. As I walked in, my Mother was sitting next to the fire, a small copper rice pot nearby. When Mother saw me, she said, ‘You came here, to do what?’ I said to her that ‘No one would get me, I just missed her’.

She also said ‘Beware! You will be killed, if they know’. I kept silent and she continued to talk, ‘Let’s eat this wild rice, which I had cooked to take to the field’. I ate it plain, without salt. She told me: ‘Akhoach died a few week ago. He was my youngest brother and was about three years old. My Mother said that he was so thin before he died. She placed his body in the rice field next to our village. She showed a little blanket and the little cloths that she used to cover him in.

At that moment, I kept silent and could not say anything. But I later became more emotionally troubled by it all.

She described the situation in the village. ‘It is so authoritarian, the village is not the same any more, and most people have died’. She asked if I was afraid to go back to my site, towards the frontline. But she also said she would ask permission from the village chief for me to leave without being harmed. Members of his family liked her very much, and both he and wife were very nice to the villagers. Sometimes she gave them fish, crabs, snails, and frogs. His name was Ta Ham. As the Khmer Rouge village chief, he ruled the entire village, yet only one of his family was Khmer Rouge, or ‘old people’. The rest were the new people who had been transferred from other provinces to create a new village in the jungle of Koas Krala District, Battambang province.

When I was eating the wild rice, my Mother went to the village chief to tell him about me. A few moments later, she came back and said ‘I told him already. Tomorrow you can go back to the frontline, and in any case, they will give you lunch for today only’. Then I followed her to the fields. Whilst walking, she described the difficult lives of the more than ten families that lived near to us. All had died, with no one surviving. I did not remember most of their detailed stories, but I do still feel the sadness today.

‘Ten families lived near my Mother. Everyone died’

However, one case that I can remember was about the two medical doctor families. The Khmer Rouge had killed them all, because when their baby died, they ate their child. In another case, people were forced to move dead bodies from the village to bury them in the fields, near the village. But one day they were caught by the Khmer Rouge, as they were discovered eating a dead body.

Back from the fields, my Mother called me to the communal kitchen to take some food. I was nervous and worried, about what I would be asked by the village chief. But no one asked me anything. I saw that most people in the kitchen talked a lot with my Mother, and it seemed that they liked her.

‘Two medical doctor’s families were killed by the Khmer Rouge, because when their babies died, they ate them’

The next morning, before leaving, my Mother told me that that Akeo’s Mother had died a few weeks ago, and left behind two young daughters. Akeo was another teenager member of our group.

Back at our team, no one asked me whether I had visited my village. Only Akeo, who was my close friend, was curious. I was silent and did not respond to him, because of what I knew. Such situations made me very nervous because the Khmer Rouge could take me away from the group and kill me.

I decided not to tell Akeo that his Mother had passed away, as I was afraid that he would report me to the Khmer Rouge. If this happened, it is unlikely that I would survive, and because I still had a relationship with family members, they would suffer too.

Sometime later, I did decide to tell him. ‘I heard that your Mother passed away’.

He just looked at me and walked away, hopelessly.