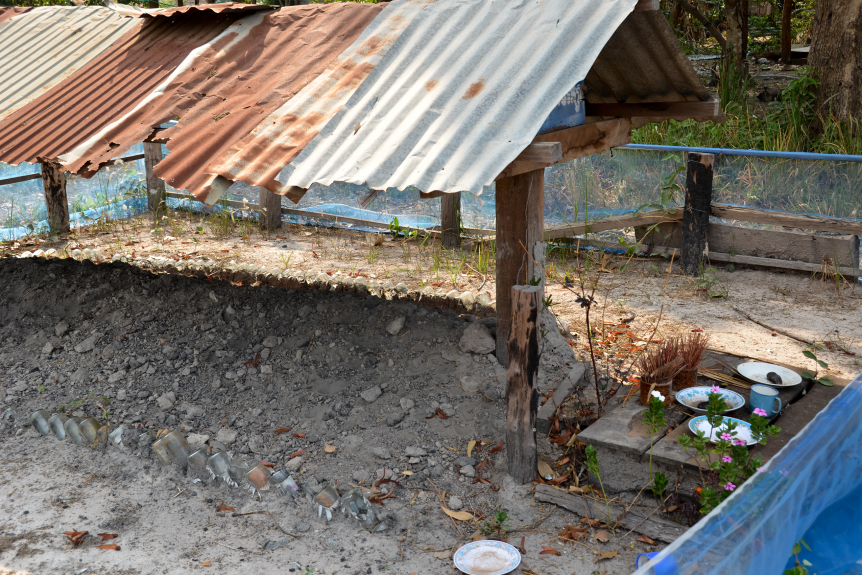 In Week Three Reflections, I noted some thoughts about how I might bring alive an installation / exhibition of the Cambodia project.

That, pause being pushed by Gary to consider using ‘photographic apparatuses’ that we don’t normally use, and an exercise on non-human photography, led me to explore the world of software.

I am not going to go through all of that exploration – but an idea did present itself.

Re-configuring the postcard. Often visitors take away postcards from exhibitions as aide memoire. Well, supposing they did that, and challenge aesthetically so that they are not just a ‘copy of an artwork’ but ‘an artwork with meaning’ in their own right?

And supposing I execute that in ways that shock or at least bemuse?

I started with some images of Pol Pot’s Cremation site, which is still there, just north of Anlong Veng. Pol Pot dies on April 18th, 1998 (an event which triggered our active involvement in building schools in Cambodia.

From the New York Times:

The Khmer Rouge rebels rushed the body of Pol Pot toward cremation today without an autopsy that could have determined whether the man responsible for the deaths of more than a million Cambodians in the 1970’s had died of a heart attack, as they have claimed.

With no proven cause of death, American Government officials and scholars who specialize in Cambodia said they could not dismiss the possibility that Pol Pot had died at the hands of his former rebel colleagues or others who had reason to want him killed.

The header of this post is an original image that I took in 2011.

Using Adobe Spark, I started laying out cards with multiple images, in a rather traditional style, as tourists would buy ay any site. But this rather trivialises matters. It is also easy to see in black and white, for impact. But then I tend to be a ‘colour’ person, so maybe even full on Pop? That seems disrespectful of the people who suffered because of his crimes, though the abstract images really beg investigation.

At the moment I like a collaged, layered approach, reminiscent of some of my earlier artworks. It is providing information, but I feel it’s also suggesting the ‘hidden’ nature of the long terms impacts of the Genocide.

An interesting creative exploration, but very much work in progress.