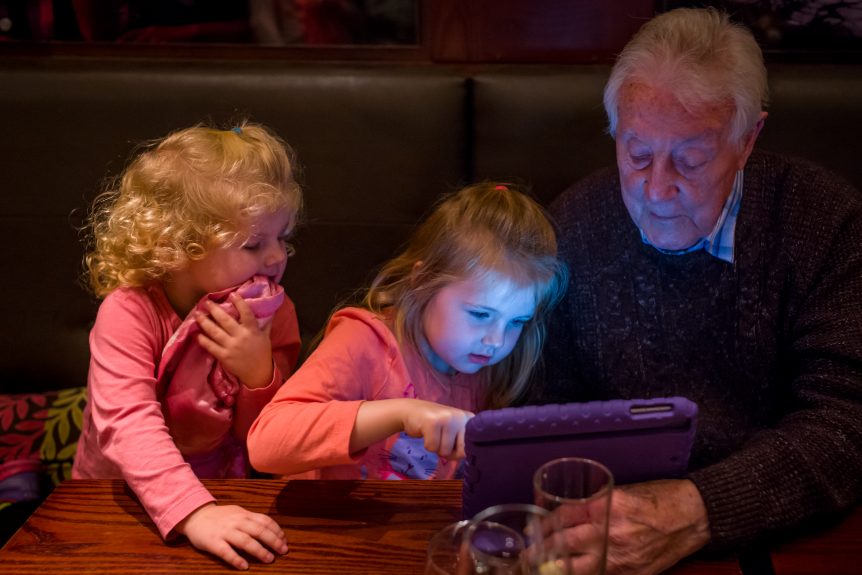 Two things happened in the last 24 hours, which I would like to connect.

First, I saw Sian Davey‘s guest lecture. Second, I had a conversation with Richard Young, a photographer and Fine Artist friend. That conversation is now in its umpteenth iteration. To set the scene, two images. Richard Young, At A Certain Moment

Taken in turn, Sian’s work is beautiful, deeply personal and long-term. The image is from her book exploring her daughter’s early years. Alice has Downs Syndrome, and Sian captures moments in her life, both the things that Alice has in common with other children, and those which set her apart. Sian is fearless in ‘taking the picture’, yet always does so in a way that combines a story with a consistent and beautiful aesthetic. In the webinar, it was interesting to hear Sian’s dedication to film, and then to 10×8 format (I wonder if she is captured by her apparatus, Gary?). It was equally interesting to hear her answer Danny’s question about Commercial work – Sian sees personal and commercial work as coming from the same source, essentially inside her, and thus sees it as a continuum. I look forward to her new work (she has a major commission in place at the moment).

Richard has a solid, commercial Fine Art practice, influenced by the New York Expressionists, amongst others, and has studied at Slade. His work usually combines graphic, figure and ‘written word’ elements. In a recent commission, Richard involved the buyer in the process of creating the image, even to the point of the buyer physically writing on the canvas. Richard has collectors, and a view of his work over the years shows a distinctive style, born from his excellent technical draughtsmanship and figure drawing. He’s always sketching.

Yet, on the other hand, Richard’s photography is far more experimental, with less reverence (in my view) for the craft or the medium. In conversation, Richard repeated a couple of points that he has made to me before, about my photography.

First, I need more ‘intimacy‘, not in the sense of physical closeness, but in psychological closeness. Something to learn from Sian? Second, that I seem rather ‘precious’ in my composition, handling of the scene, post production et al – something he eschews in his experimental photography.

We talked about the craft that we each pursue, and the infamous 10,000 hours of (needed) experience. This time, though, I offered that Richard was equally ‘precious’ about his painting, but not about his photography. He has a painting style, knows it, uses it, and it works. Yet in photography, whilst (I discern) an expressionist heritage, he’ll shoot whatever takes his fancy, and however he feels like doing it at time.

Richard is as much a slave to his apparatus in his main craft as the rest of us – including Sian.

On the other hand, I accept I am ‘precious’ about my photography (Richard believes I usually bring a photo-journalist mindset) yet not at all precious about my painting, which has changed a lot over the years. Of course, I don’t claim to be a Fine Artist!

It seems to me that understanding what we are ‘precious’ about, both to use it, hone it, make it work – and to break it up – fits well with the themes of this module. And I can’t help but go back to Beginner’s Mind …

Let’s think a little further, there are precious, semi-precious and non-precious gemstones; preciousness is thereby an expression similar to covet referring to one’s own perspective of the ‘value’ of something. Creative people often covet their own work, criticism becomes a message associated with harm and therefore they (or we) protect ownership and the creative work by trying to justify its existence. Taking a photograph takes judgement, the post production becomes part of the creative process, indeed it becomes too easy to develop some level of preciousness of the work, so during the creative post production process, the question is do I do anything to the image? Cropping or editing is a skilful process and marginal images can be reborn or taken to new heights.

The question is, can you walk away from it, leave the image to fend for itself, end your association or ownership. A little like deciding to throw a beautiful diamond away, never to be seen again. So, I am using preciousness to define the opposite, which is the point where the creative owner no longer needs to be recognized, when criticism is not important in itself but simply as a guide for seeing new opportunities. The view stands equally for work that I paint or I photograph. Tools (or apparatus) are a completely different question and are not in context with preciousness. Tools define the boundaries within which you can operate, is the colour gamut correct, is the rendition consistent, a 20mm lens has a different field of view compared to a 200mm lens with both distortions of what are perceived by the human eye. Do you become slaves to the tools, I would say that you do although we all slave to some conventions.I tend to describe myself as a Fine Artist and see no creative difference between the painterly stuff and the photography, they both provide me with excitement. Painting tends to take a much longer time, the idea can be conceived instantaneously or morph during production, can be very disciplined or totally undisciplined. Similarly photography starts in the same way, execution is immediate and post production plays around with the tonal or colour elements of the work with some cropping.

Curiously for me, I don’t use Photoshop to eliminate or add or distort elements of the composition – a clear departure from painting where the pigment is pushed around the surface and sometimes dramatically overworked with mixed media. Clearly the tools play a role here.

The process is precious as my skills take me to new places, however, my skillset is limited so I do tend not to explore areas where these don’t exist. I try not to be precious about the end result, the ownership no longer exists so the work stands amongst others for others to judge