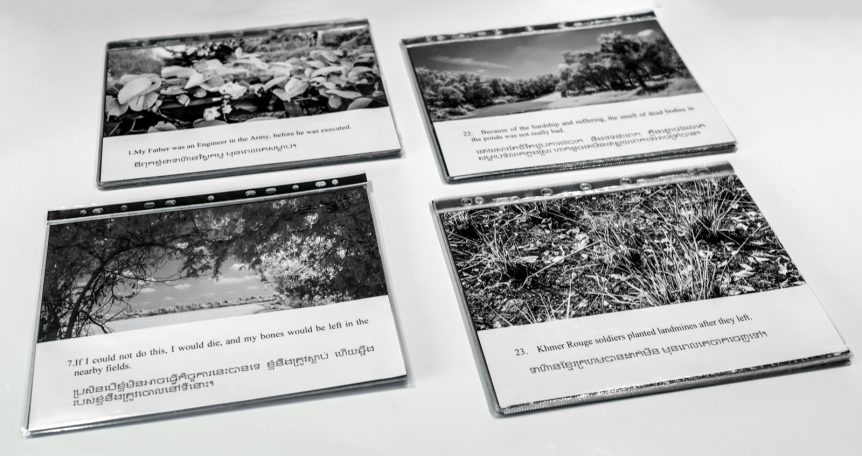 On Friday, I gave a talk to the Frome Wessex Camera Club, entitled ‘Unfinished Stories – From Genocide to Hope’. I was gratified that it was a full house. The presentation was billed thus:

‘It will cover a bit of my photographic journey, a bit of Cambodian history and educational progress, and a lot about making a modern-day photo documentary. And there will be a group activity.’

The main focus was to show how I explored different creative directions in the past (almost) 2 years, to arrive at the solution for my FMP. I talked about (and illustrated) the Cambodian Genocide, documentary approaches, dark tourism, atrocity, aftermath and ethics – not exactly light fare for the club. I also shared the video of Sarath talking about missing his mother, to set the scene for ‘Unfinished Stories’.

After I showed one of my FMP images, I asked the audience to split into groups. I gave each group a complete set of the 30 quotes from the book / final image selection. I also gave them a subset of the photographs – each group had a different set, and the photographs were in plastic sleeves so that they could place a quote inside the sleeve with the chosen image. Whilst I admitted that the task was rather unfair as they did not have the complete context of the stories and the photographs, they all set about the task with gusto.

I had underestimated the size of the audience so the groups were too large, but the learning was interesting.

Some were frustrated that they did not know exactly what the more abstract (traces) images showed. They wanted literal combinations. There was also a tendency to look at the details in each image and try to match something within it with a quote.

And the approach was very much ‘an image at a time’. No one started, as far as I could tell, by creating a story – either via an image sequence or a written one, based on the quotes.

We discussed these points collectively at the end. Back in the studio, I can see that each of the groups did come up with some examples that were very close to the way I have made these decisions.

In closing the presentation, I shared examples of my choices, and explained a little how I got there.

Several members of the group talked about how thought-provoking the evening had been. In fact, at the very end, David, the chairman, actually shed a tear as he closed the meeting, reflecting that such terrible things get hidden, and are still going on today.