‘Beautiful, simply powerful, thought-provoking, the words and pictures go together so well, courageous‘.

These are some of the words written in the visitor’s book after the first few days of the installation. I have been positively surprised, and more than a little humbled, by the interest that visitors have taken in the exhibition. In 6 days, including the evening preview, the show has had about 200 visitors.

My work is designed around paradoxes. First, the obvious one of such an appalling Genocide hardly being discussed, even in Cambodia. And so few people have been brought to justice. Second, there is paradox in understanding that today’s largely anonymous landscape hides the atrocities and the unmarked burial of so many victims. And third, my photography of  beautiful places set in direct counterpoint with a quote of terrible personal sufferings in itself a paradox for the audience.

In this post, I want to reflect therefore on some of the curation decisions taken around these paradoxes.

I have been involved in group shows before, both in the curation of images to be shown, and the hanging plans. But this is the first time that I have created a one-person show.

Whilst from the beginning of the MA I had determined to tell the stories of our friends who survived Khmer Rouge times, it is fair to say that I did not know how. Sarath only started to write down his history when I visited Cambodia in February 2018. Simeth had done some writing, in the form of PowerPoint, but not in a consistent fashion. I encouraged them both to create a series, without in any way dictating the contents. When I received the accounts, over a period of several months, I corrected a few grammatical points, but kept the original text as much as possible, to leave things authentic.

I sorted the stories into a rough historical sequence – before, during and after the Genocide years – and corrected some place name spellings and other details to present Sarath and Simeth’s stories essentially as one continuous narrative. This sequencing became essential to both the book design and the curatorial decisions for the BRLSI FMP exhibition.

In parallel I was exploring photographic techniques. Starting with Sophie Ristelhueber’s work, the notions of aftermath and traces were developed. On one hand I experimented with negatives for Landings 2018. The idea was to prompt the audience to look again and engage with what they were seeing, without the obvious tropes of dark tourist imagery. The work used a rather traditional narrative of the Genocide, centred around the Tuol Sleng torture facility and Choeung Ek (the Killing Fields). It was disconnected from the personal stories.

In August 2018 I did use one of Sarath’s accounts, I Missed My Mother, as a central idea behind the Surfaces & Strategies WIP, photographed using rather traditional colour landscape and traces work. I shot images which illustrated Sarath’s midnight walk through the jungle to see his mother.

Stepping back from these two bodies of work, I determined that I needed to combine the spirit of modern-day image exploration with the deeply personal stories as the template for Sustainable Prospects WIP. This also used negatives in A Prayer From Hell, again using Sarath’s story as a rough narrative. Many discussions with Cambodian photographers and others ensured the appropriateness of the work for that audience. For example, Youk Channg, Director of the Documentary Center of Cambodia (DC-Cam) coined the phrase ‘A Prayer from Hell’).

In retrospect, however, the work over-relied on some images which were perhaps too obvious in their content (e.g. skulls, bones, hands).

From that point on, I determined to investigate ways to combine the best of these ideas into a single body of work which was more metaphorical and less literal.

The discovery of Judy Glickman Lauder’s work was an ‘ah-ha’ moment. She mixed black and white, negatives and infrared to investigate the Danish exception to the Holocaust. However, Glickman-Lauder separated the historical narrative using these techniques from the personal, survivor stories where she used simple portraits. I determined to combine these ideas.

Infrared photography was an exciting prospect, offering a way to cut through the greens of the forests whilst suggesting an eerie, ghostly image quality.

I shot using this technique for the IC WIP in early 2019 incorporating for the first time quotes from the personal accounts (in English) and entitled Unfinished Stories. That title had first appeared in my project proposal for Positions and Practices, but was not really fully developed as an execution until IC. This became the basis for the FMP work, in which I firmly settled on using landscape in my statement as the principal metaphor for the Genocide.

Initially inspired by investigating Paul Seawright’s  work on Sectarian Murder, the decision to include text with the photograph became well-researched and central to my practice. I will not repeat that here, other than to note that discussion with others added the critical dimension of using Khmer script in the images, to anchor the work in physical space. The focus for FMP was very much on constructed images.

I created a series of about 30 photographs and quotes from the stories. Some of the matches were more literal than others, albeit still thought-provoking – a dying tree, dying people. Other images were much more enigmatic. I deliberately mixed landscapes and traces of landscape, to encourage sustained audience interest when viewing the work.

I also opted to use a unique metallic / acrylic finish. This print technique fully embeds the quotes into the image, leaving the audience in no doubt as to my intent.

Subsequent comments have also suggested that the unusual surface engenders a sense of both melancholy and other-worldliness. I have been gratified by many visitors wishing to discuss this rather technical aspect of the exhibition.

Unashamedly, and reflecting my ‘customer’ background I researched the final choice of images for the show. This largely confirmed my curation decisions, although it did add a couple of positive surprises. As noted above, I designed the show to have a roughly chronological order, mixing Sarath and Simeth’s stories, and types of photograph.

Wendy’s advice on the installation was very helpful and gave me confidence in the curation planning.

I opted to print at A1 and A2 sizes, with the later set out as a formal (elegant?) grid. This seems to fit the gallery space well, being dramatic enough in size without being overwhelming or cramped. 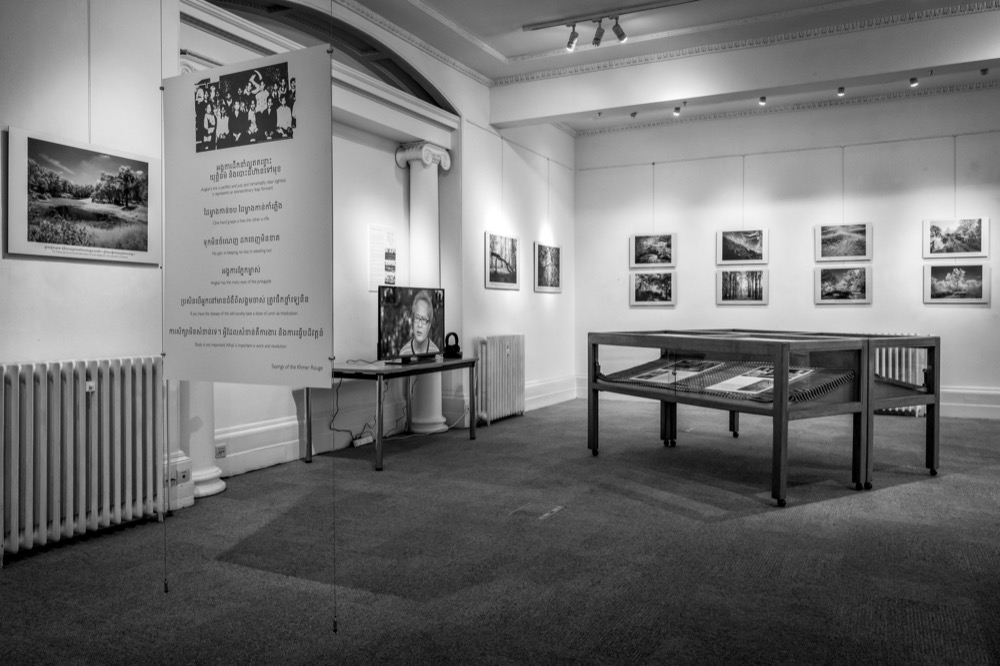 On the day of the hanging, I did move a few images around, mainly to manage some of the lightening limitations at BRLSI. Overall, though I am pleased with the results. Installation shots are here, which also illustrates the direction of visitor travel through the show.

From inception, it has been clear that the historical background of Cambodia and the Genocide is not very well known, other than soundbites like ‘Pol Pot’. At first, I thought that would mainly apply to my Western audience. But the lack of discussion of the subject in Cambodia  and the prevailing, rather simplified narrative of a  ‘few bad people caused an aberrant Genocide’ means that the need to set context is important for all audiences.

Studying photographers such as Susan Meiselas and Allan Sekula have really helped frame how to handle this side of the project, and I believe the show is readily transportable, now, to all parts of the world, with only language translations needed for the history boards.

The book includes a quite detailed history, and a timeline. It is the latter that I opted to repeat in the exhibition itself.

As the audience enters BRLSI, they first see the project statement. Then the focus is entirely on the sequence of landscapes / quotes, the only ‘interruption’ being the video of Sarath. Watching people circulate confirmed the strategy as almost everyone went from image to image, reading the text as they did so.

Only at the end does the detailed historical context unfold, using BRLSI’s display cabinets, and it could in fact be ignored. But generally it isn’t, as most visitors opt to study at least some items on display.

Offering leaflets explaining the key elements has also been popular, and the free postcards which feature the images hanging are also going quickly!

Again, from the beginning I have wanted the Yates family story around the school program to be peripheral. Whilst it must be part of the context – both explaining how we met our Cambodian friends, and why we all see the hope in education – the exhibition is about Cambodians and their stories of the Genocide.

The education program has also been physically executed at the end of the walk around, as a ‘positive’ ending.

I have used BRLSI before for group shows, but this is my first solo venture, and it has been both a huge learning exercise and a most satisfying project.

Taking the time to study the venue and plan has been an essential part of the project development process. It is good to see the plans translated into physical form. The gallery space is at the entrance to BRLSI, and it gets a lot of ‘passing traffic’ as people go to meetings in other parts of the building.

The hanging posters right in that pathway (with the sayings of the Khmer Rouge) have proven particular effective at getting people to pause, read, and want to see/know more.

And it is very gratifying, if a bit surprising, to witness such a positive audience reaction to the way the terrible subject matter has been treated.

MEISELAS, Susan. 1997. Kurdistan: In the Shadow of History. Chicago: University of Chicago Press.