One of my on-going projects is to digitise film archives from the 1960s, 70s, 80s and 90s. I started this process a few years ago, but have only recently decided to be more systematic – starting with those first boxes and moving forward. I mainly used Agfa CT 18 slide film, and like many others sorted the ‘best’ from the ‘rest’. Being something of a squirrel, I kept everything. The ‘best’ are in slide trays, ready to load into the Leica Pradovit P300 iR, a gorgeous machine with a brilliant zoom lens. The ‘rest’ are in their original Agfa plastic boxes – orange at first, then blue from the early 1970s.

I have now decided to scan almost everything, using batch processing of 12 at a time via the Epson V 850. To do so, I methodically work through combining the ‘best’ and the ‘rest’ in numbered sequence (yes, I actually have a handwritten catalogue of every slide). It is a long and involved process. But I have an established work flow, and there are gems to be found which makes it worthwhile. Right now I am in 1975, on an Egyptian vacation. 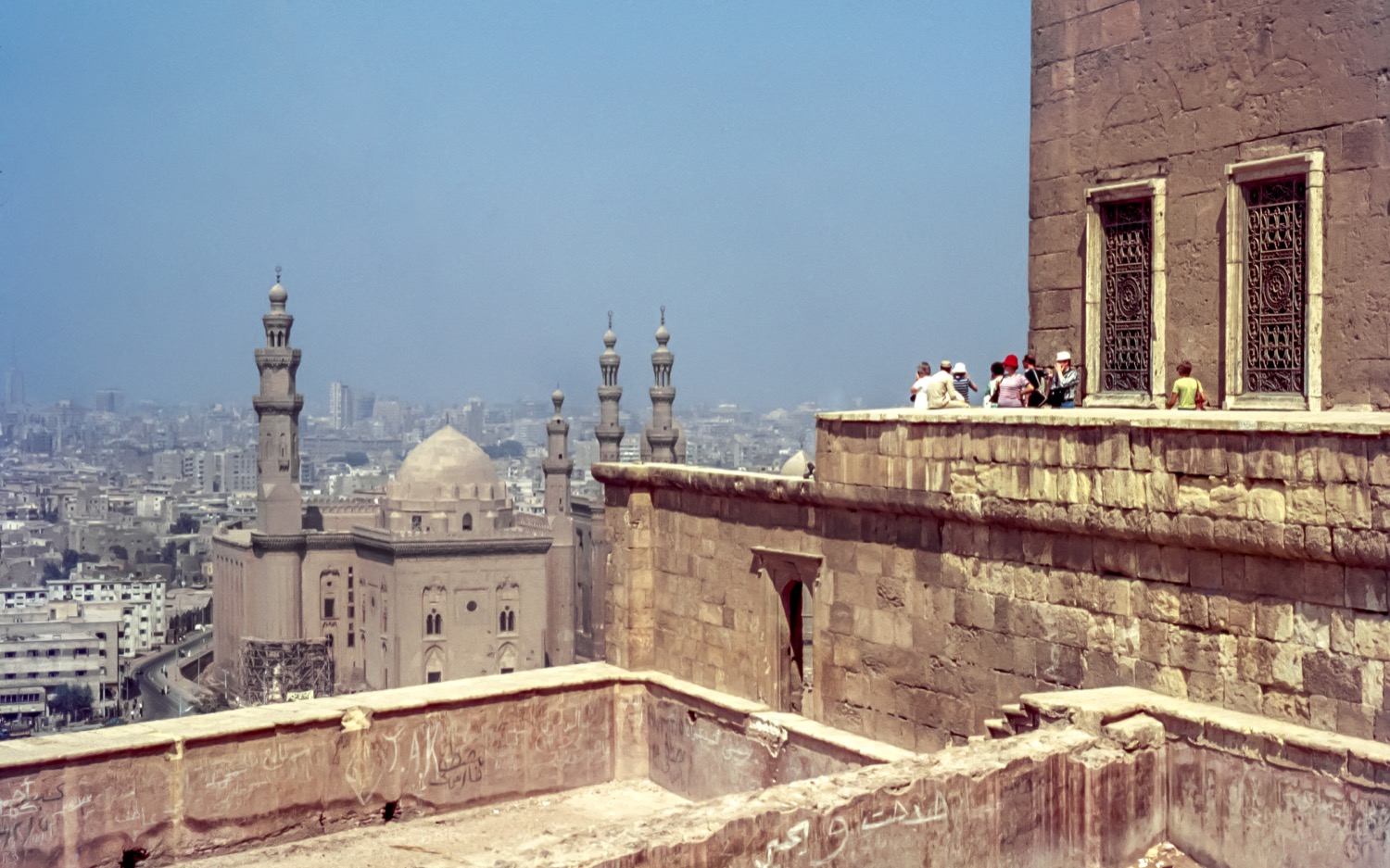 I had a Praktica LTL, which was manufactured between 1970 and 1975 (my previous Praktica Nova 1B was stolen in Paris, in 1973). Prakticas were cheaper than their Japanese equivalents, clunky, and noisy. But the lenses were pretty good. 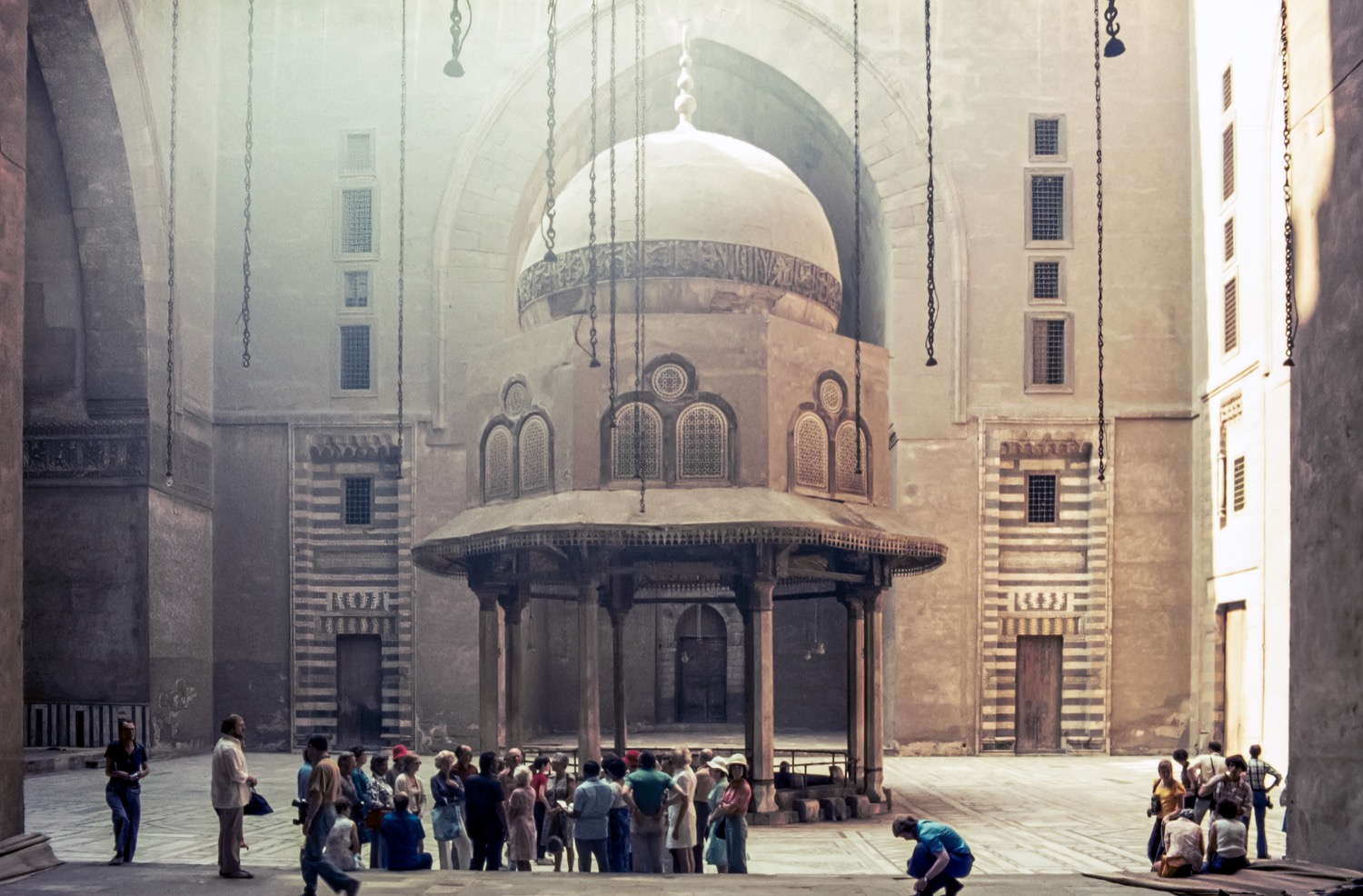 The work flow I use for scanning is this:

It is a time consuming process, but I have found that having a standard workflow helps a great deal.

Stepping back, I find it interesting that the discipline of taking slides meant that we tended to focus on ‘what was in the frame’ – and also exposing for highlights. 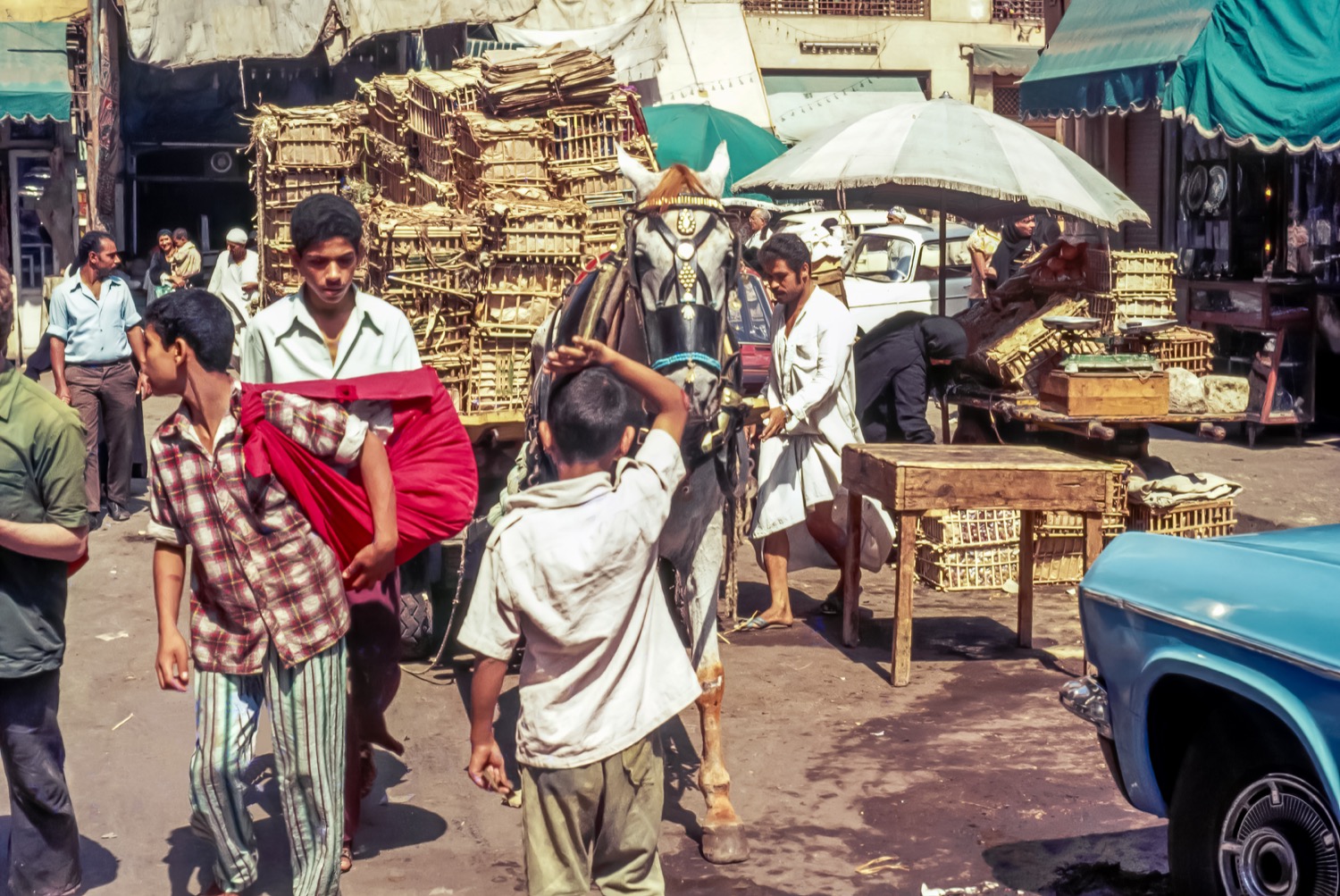 Perhaps the first ‘finding’ of my workflow is that, contrary to my tourist memory, I took a lot of photographs of people. 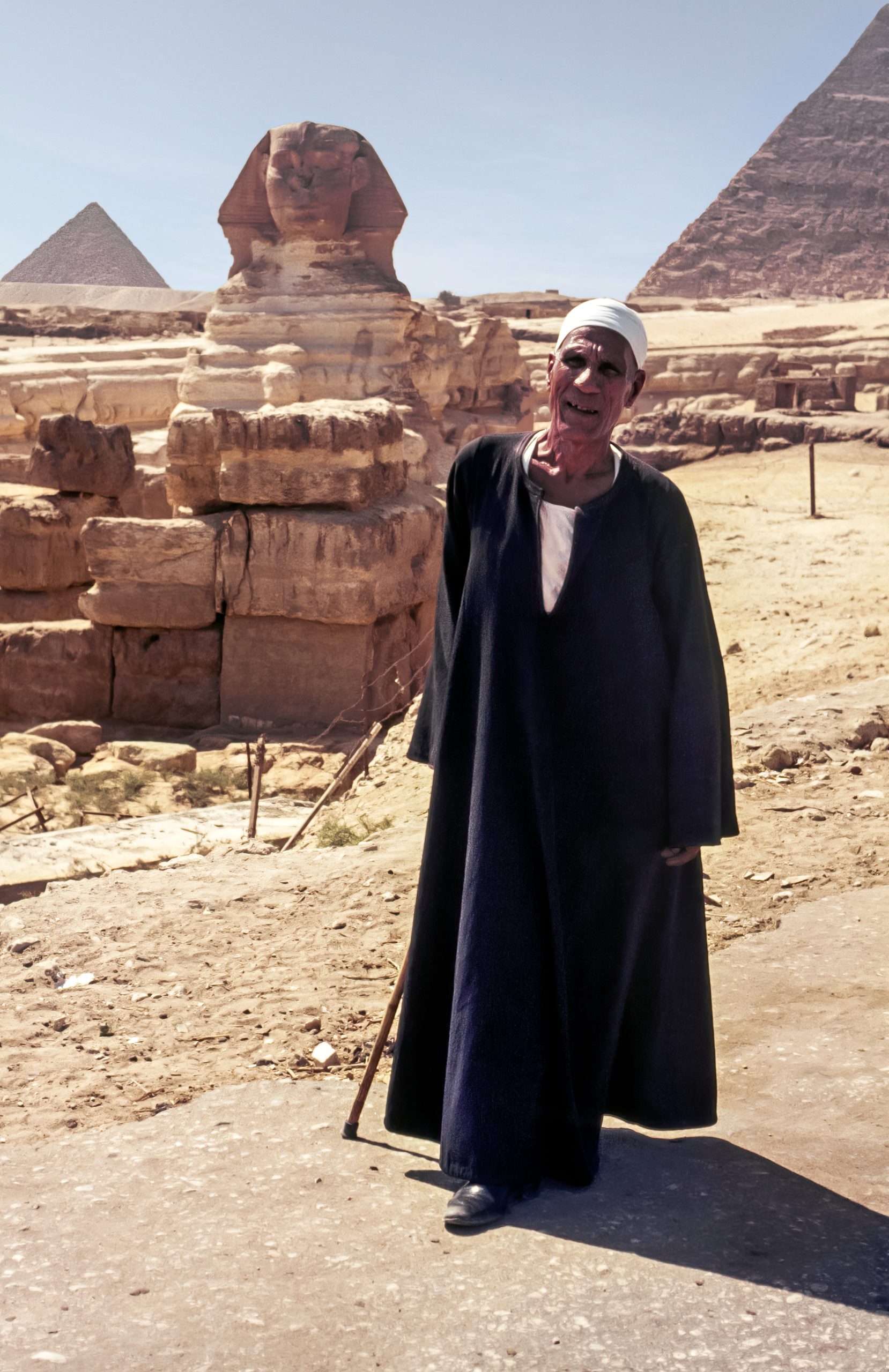 Yes, there are a few typical images of monuments, though frankly not as many as I seem to remember taking. 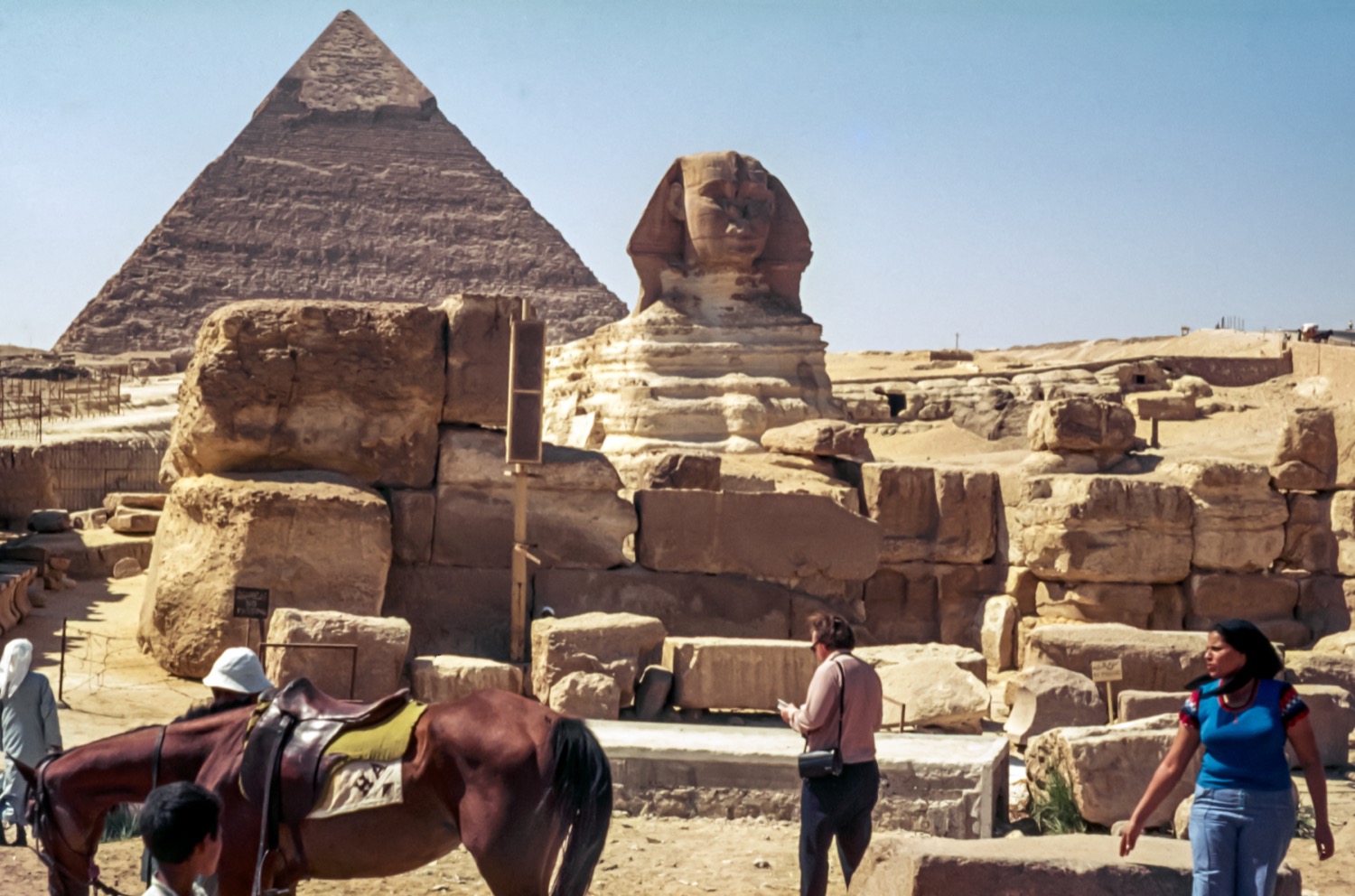 Mick Yates. 1975. The Sphinx and Pyramid of Chephren.

People have always been more interesting to me. 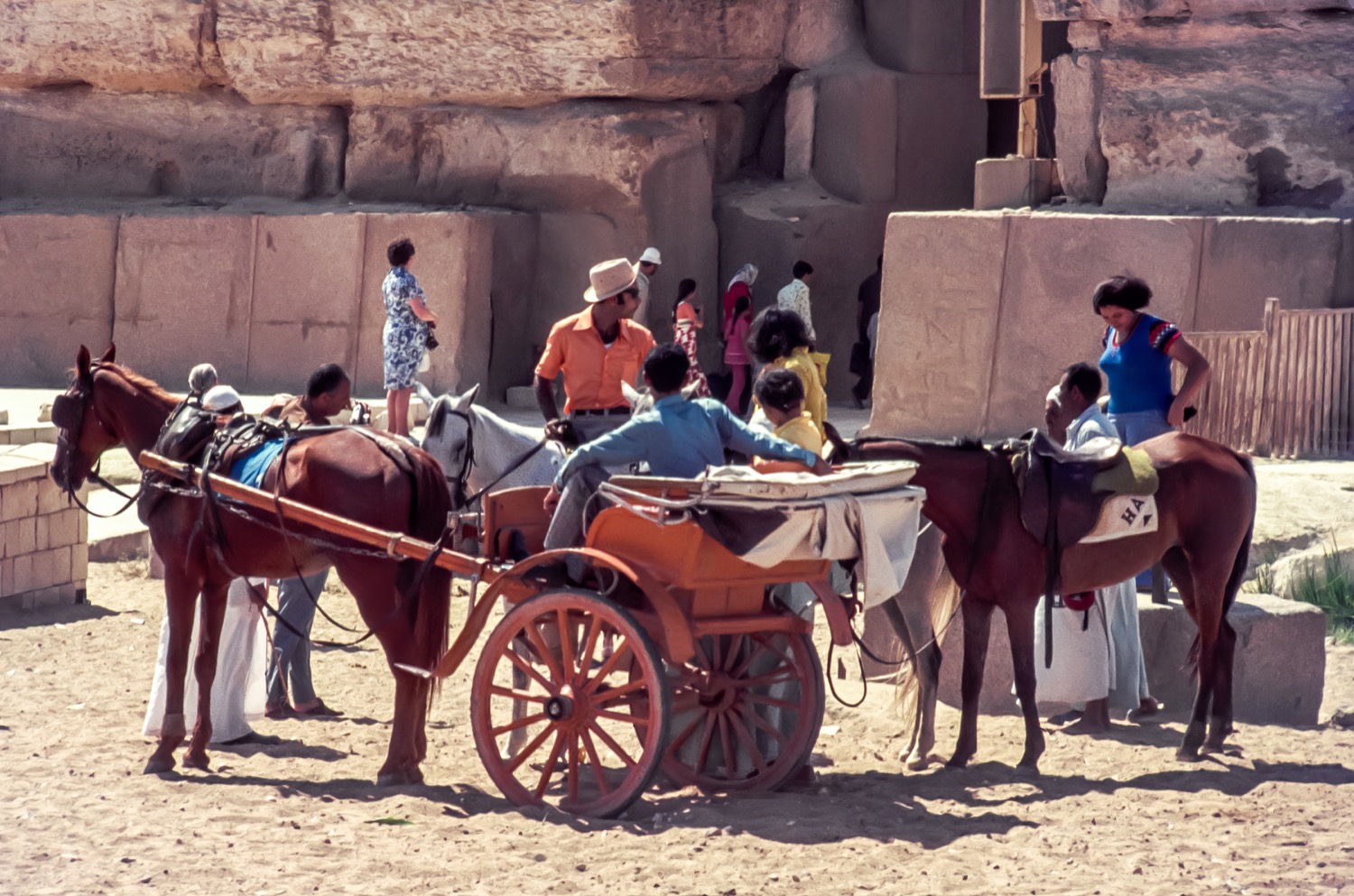 Now I understand the history of photography a lot better, I see that ‘street’ goes back to the beginnings of photography, with perhaps the flâneur Eugène Atget the first major exponent. It is only during the 60s and 70s that ‘street’ became a genre, rather than just ‘documentary. Anyway, I digress. 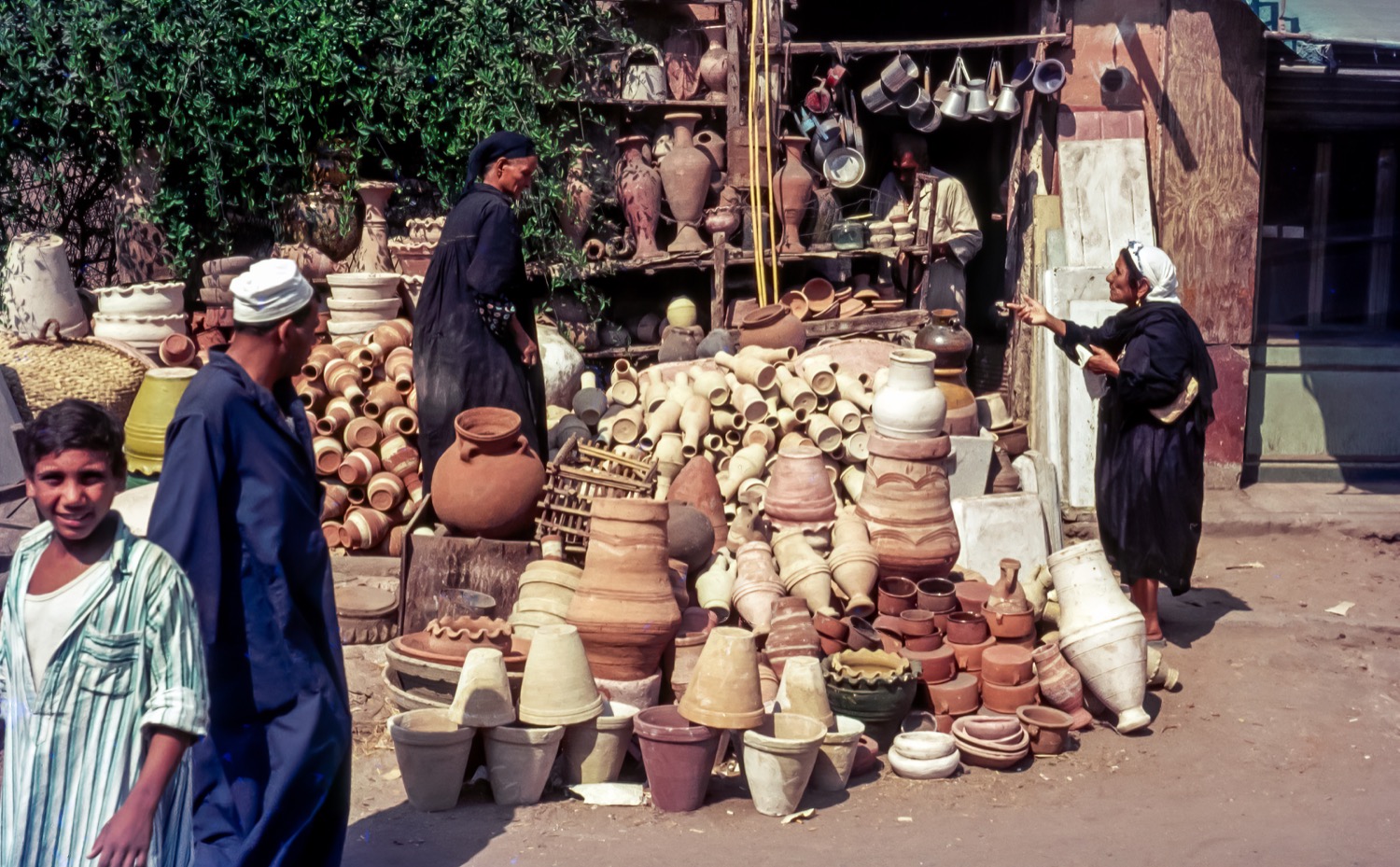 What I find absolutely fascinating is seeing new things as I work through the slides. I absolutely cannot remember taking the photograph above of a pottery sale negotiation. And whilst I tried to make good, stand alone frames, the happy coincidence of the boy in the foreground makes the image. This was taken from a bus, by the way.

Whilst I really took more than one picture of any given scene (overconfidence? Sparing the film?), I did often ‘work the scan. I do recall this photograph of the Citadel, which made my ‘best’ set. And yes, that was the actual sky colour, just restored a bit. 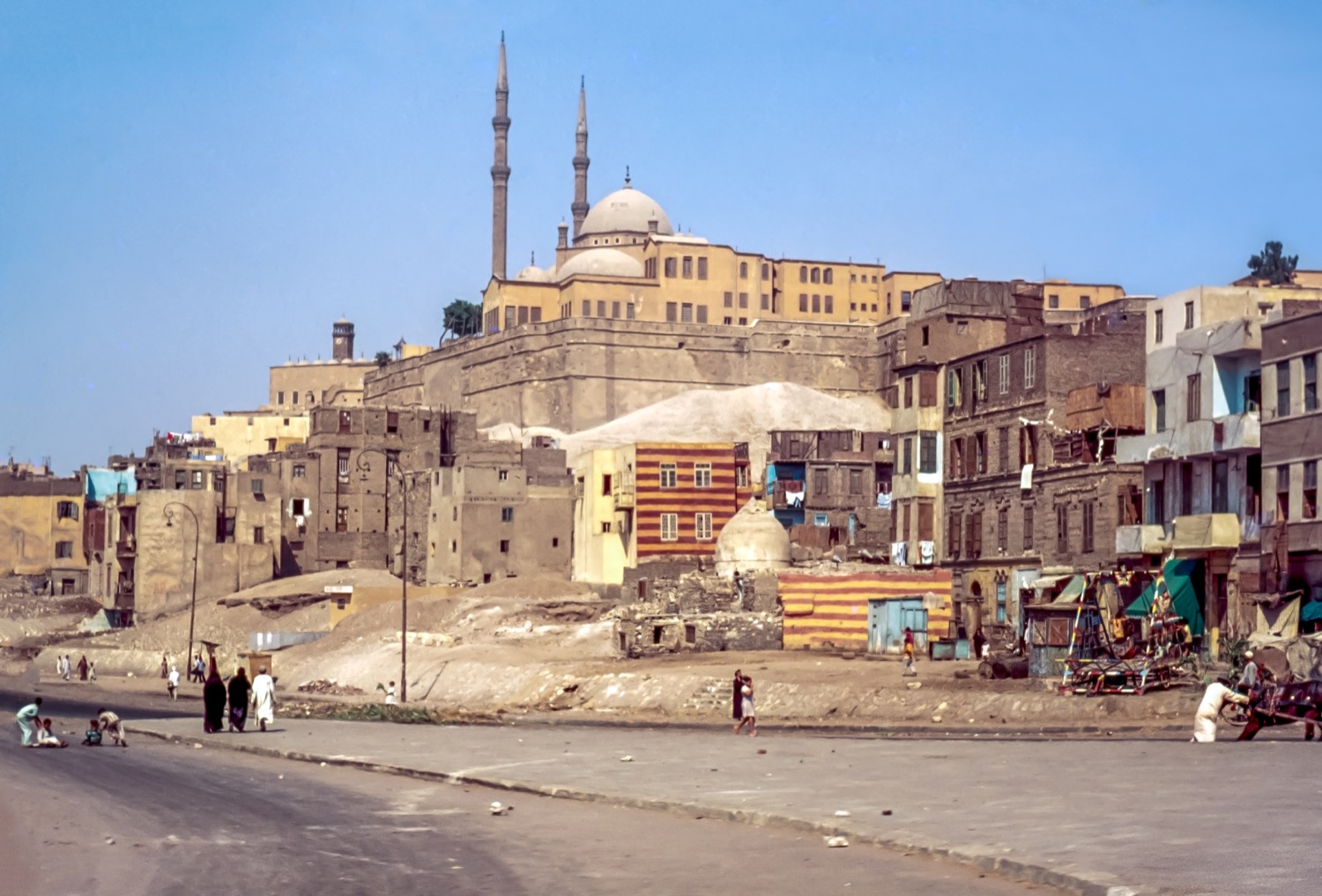 Going through the ‘rest’ I also found this photograph – an historic record of scenes gone by, I think. This was an image consigned to storage, as I assumed that it would hardly interest viewers of my original slide shows. But now, but as an historical, social document, it is meaningful. 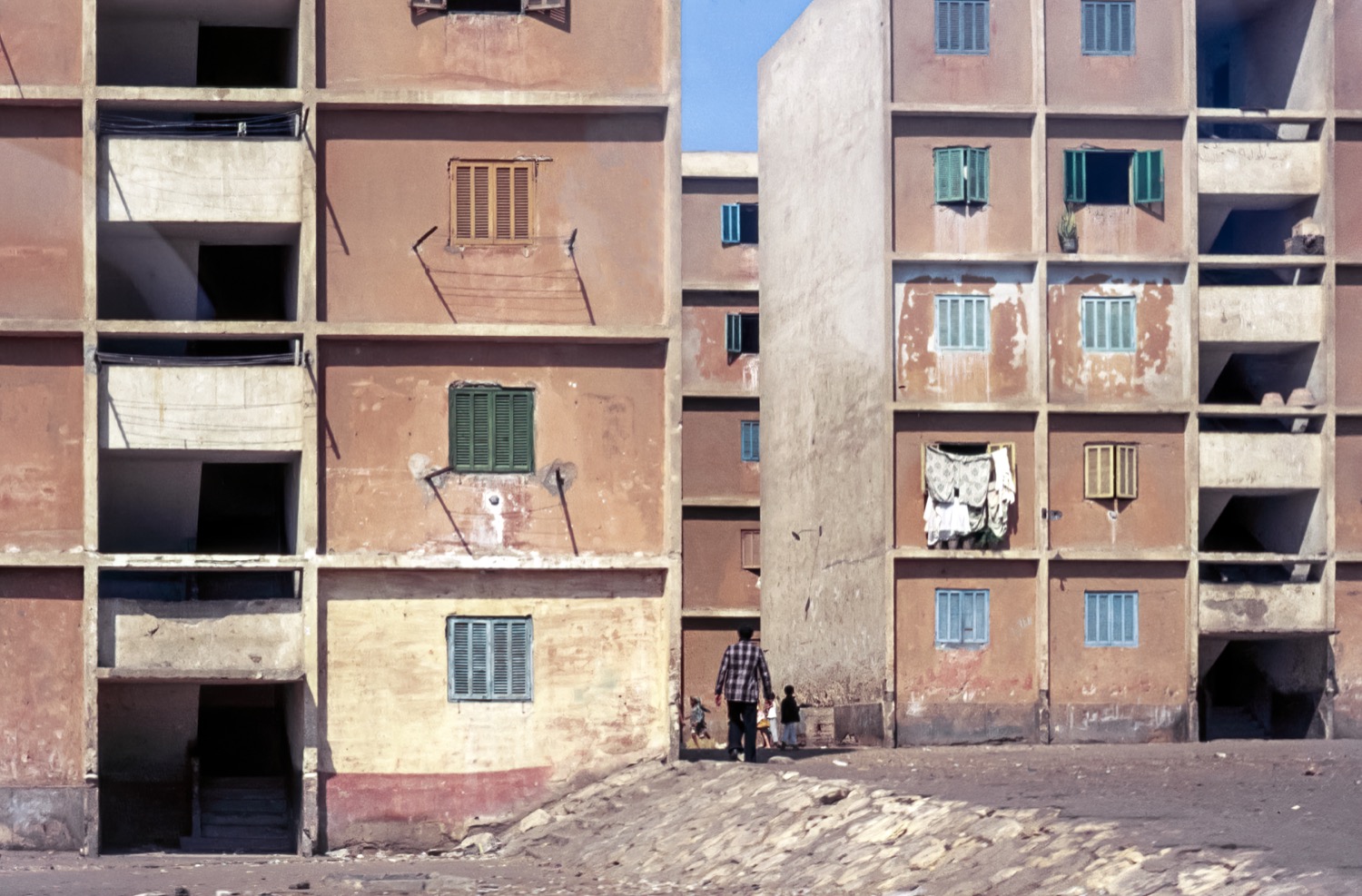 I had thought that my current overt pursuit of narrative is one of the biggest changes in my photography since I worked through the MA. But when I look back at the Egypt series, perhaps not. 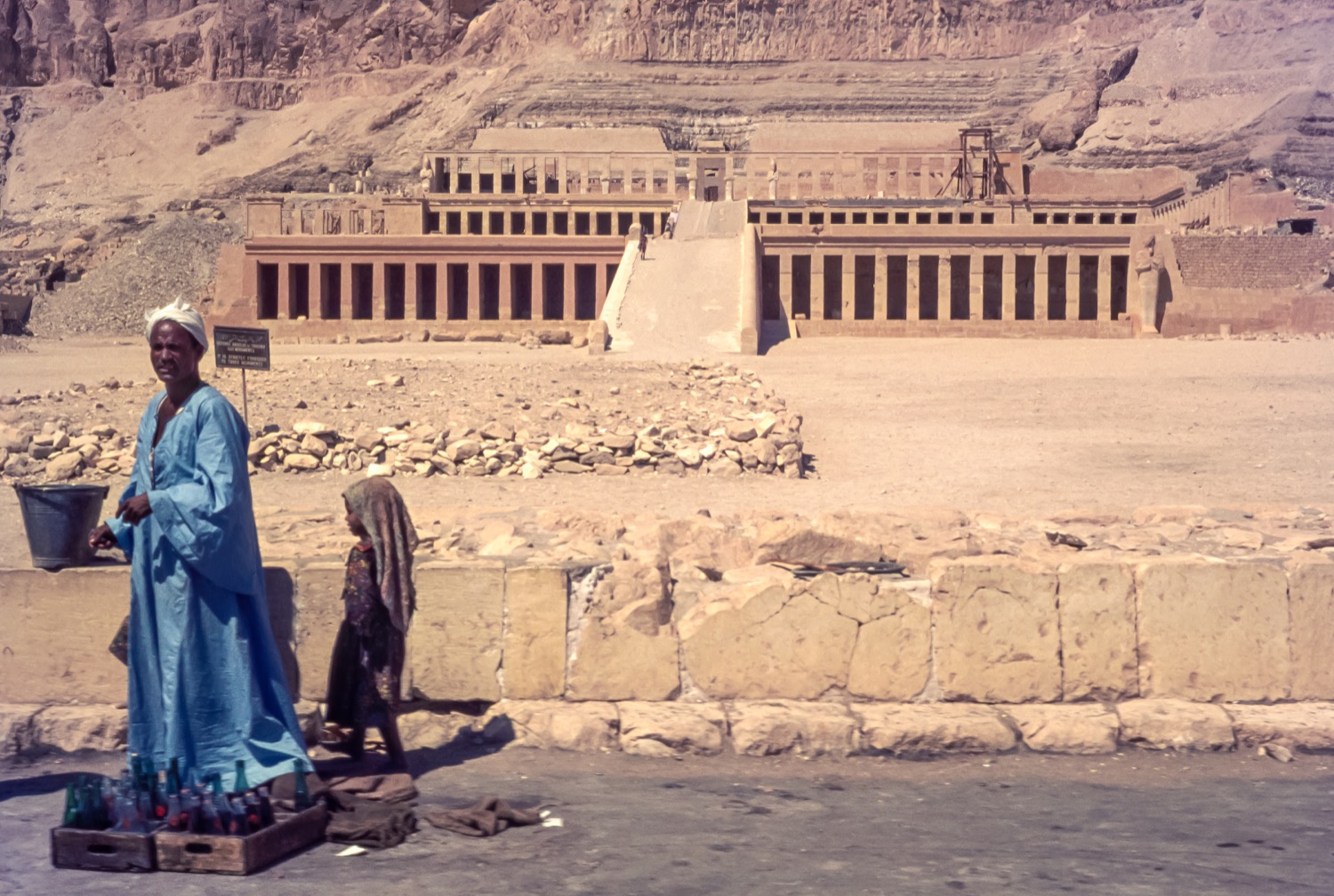 Mick Yates. 1975. Coke Seller at the Temple of Hatshepsut, Luxor.

I recall this event. It was a scorching hot day, and our small tour group had just got out of our bus. Out of nowhere this very resourceful gentleman (and his daughter) showed up. Coca Cola appeared, kept cold with ice from his bucket. He sold out in minutes. I managed to take the photograph before the seller was mobbed by customers.

And then there is this, which had been consigned to the ‘rest’. I had thought that the image was not technically good enough to make the ‘best’. 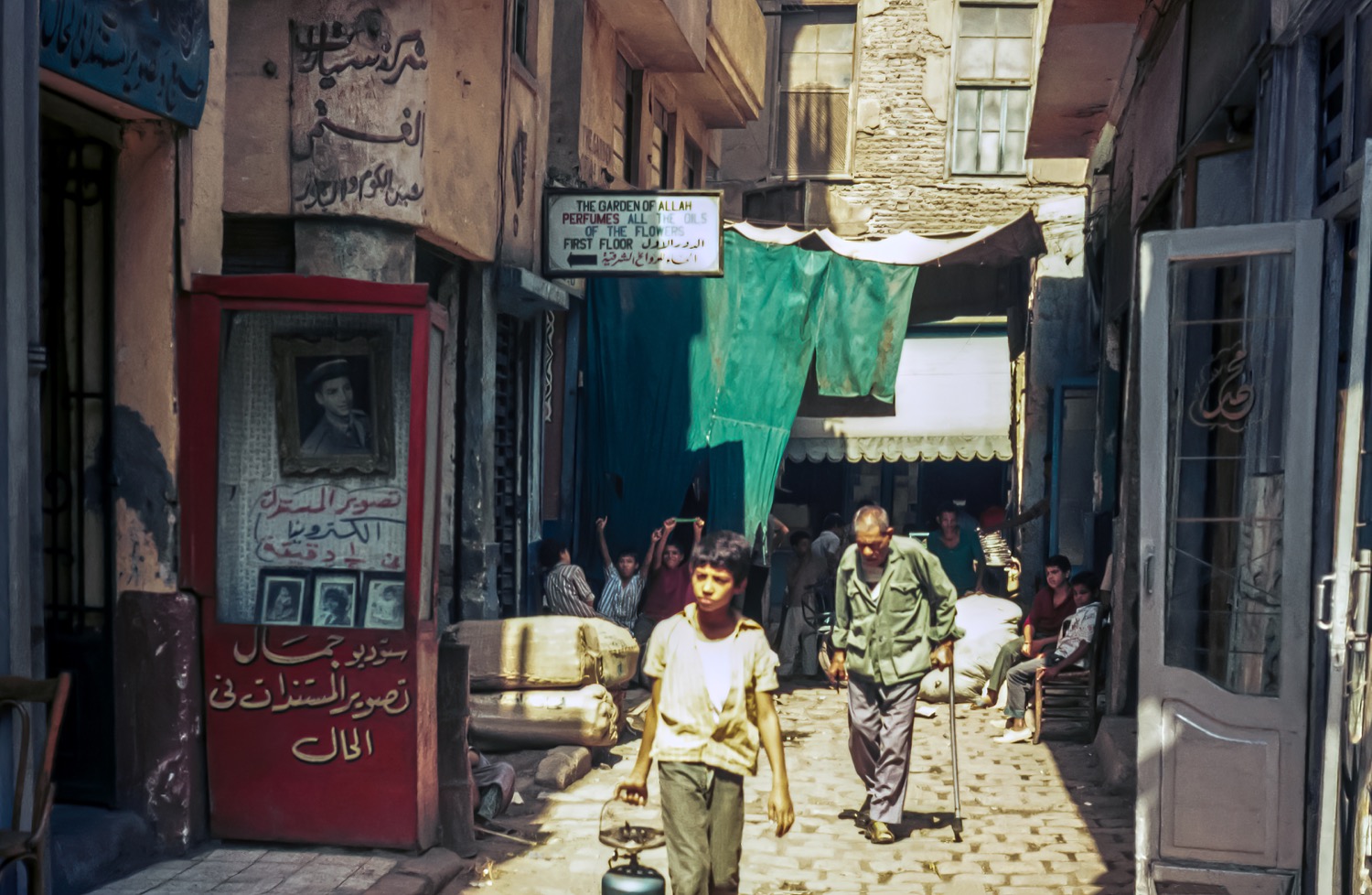 When I actually properly looked at this photograph, I saw layers. I do not remember taking it at all – probably a bit of a ‘grab’ shot as we walked these streets. But then you ‘see’.

The boys are trying to attract my attention. The photographer is advertising his portraits, probably taken with a large plate camera (and an Arabic-speaking acquaintance noted that he is selling photocopies, ready in 30 seconds). People are going about their daily chores, and there is a cafe at the back. Eventually you visit the perfume shop ….

The boy at the front is blurred, and without feet. So this is not an image for the RPS or the camera club. Colours faded. But I love it.

Looking again, seeing, and finding a narrative is rather more interesting than photographing the Pyramids. That is, unless you climb to the top in the evening, when the tourists have gone, as we did with a guide. I am sure now this is strictly forbidden … 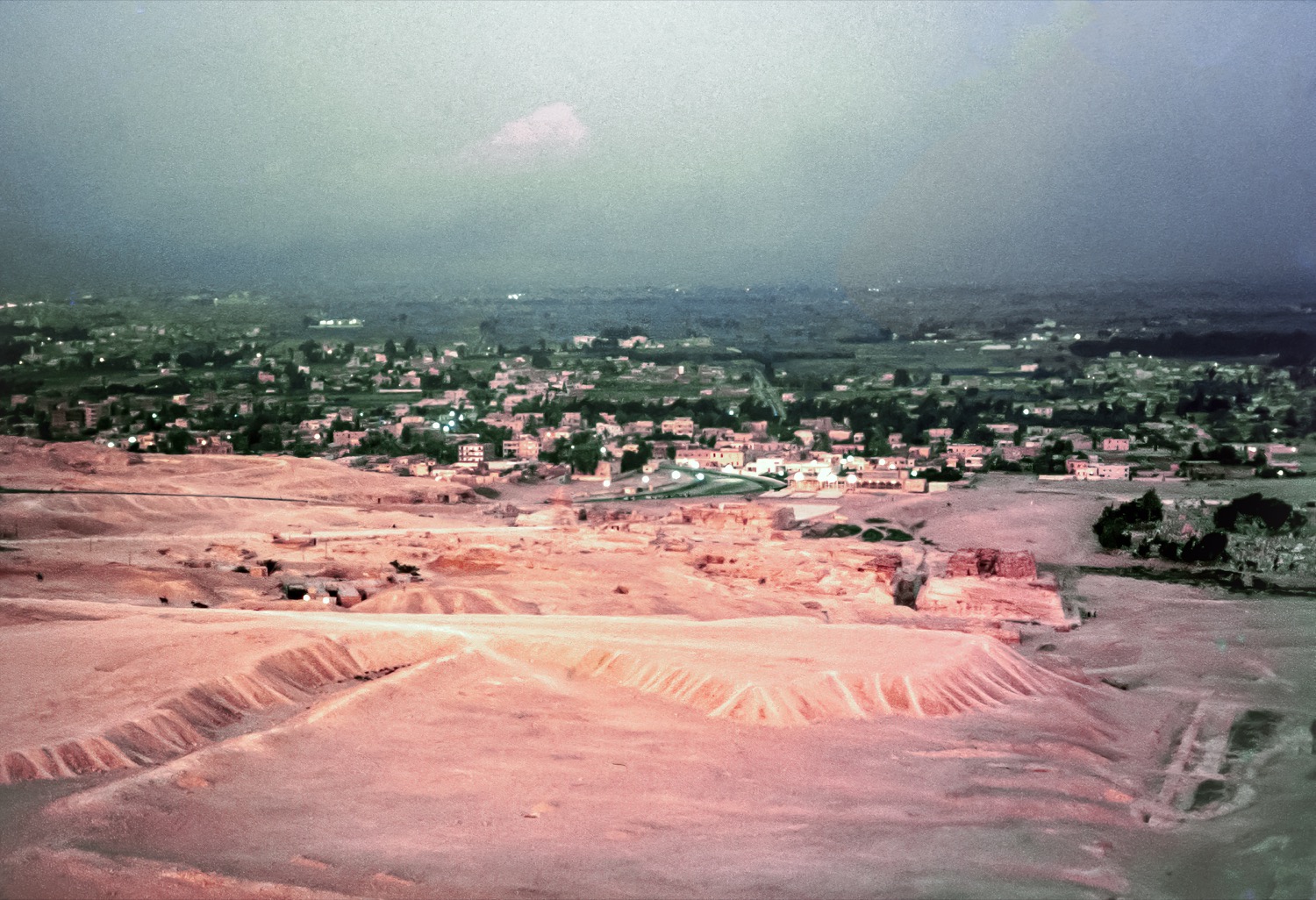 Mick Yates. 1975. View from the Great Pyramid of Cheops, Cairo.

And here is a view from the next day – to the west from Cairo Tower, looking towards the Pyramids, 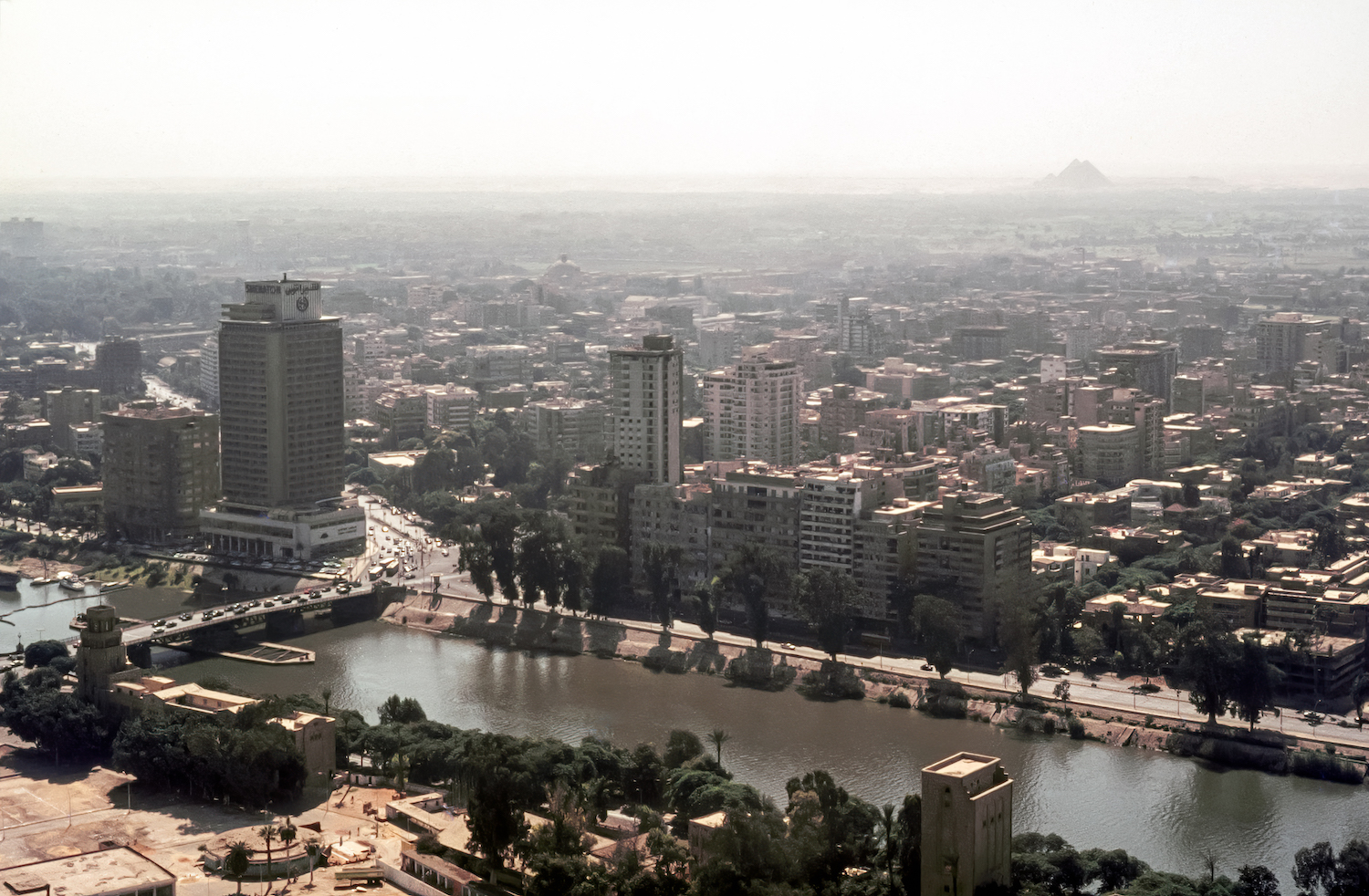 And, looking the other way, towards the Egypt Radio and Television Union. 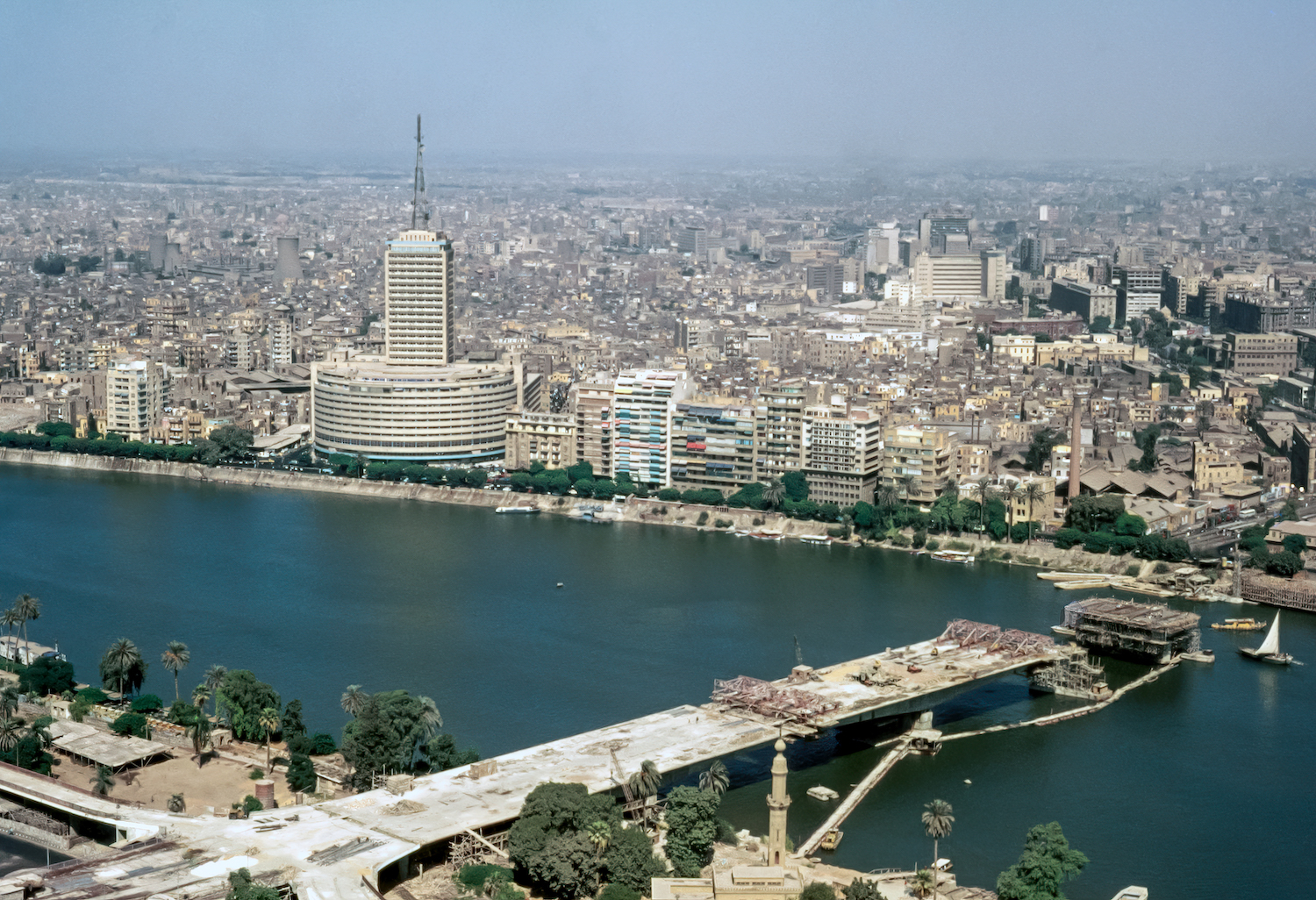