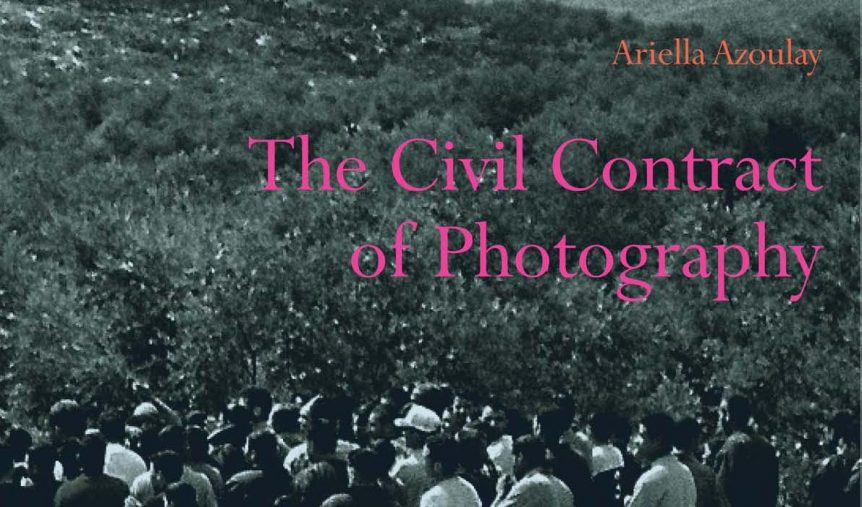 These notes are not a full book review – more the key points that struck me, appropriate to my project work.

On ‘The Civil Contract of Photography‘, 2008

Interesting thoughts on Jonathan Walker’s palm .. he had it photographed (1845) with the SS tattoo he received (as a slave stealer). He was imprisoned for freeing slaves, so his photograph was opening up a new community of viewers and concerned citizens (pg 20)

‘The invention of photography offered the gaze an absolute plane of immobility, a plane on which all movement is frozen, transformed into a still picture that can be contemplated without disturbance’ (pg 93)

‘Even when this encounter [photographer, photographed, canera] occurs under the conditions of distress or disaster, when a threat looms over or has already caused harm to the political [citizen] space, as a space of plurality and action, the act of photography and the photograph it produces might, at least potentially, restore it [the citizen’s rights]’ (pg 93/94)

Azoulay’s main point is that photography can restore citizen’s rights.

Also, Thompson was quoted as saying ‘I’m tired of being a symbol of human misery, moreover my situation has improved’, in Marie-Monique Robin ‘Les 100 Photos du Siécle’ (pg 125)

The photographer owns the rights in law, but Azoulay disputes this in practice.

‘The exercise of photography in such [disaster] situations is actually the exercise of citizenship – not citizenship imprinted with the seal of ‘belonging’ to a sovereign, but citizenship as a partnership of a governed person taking up their duty as citizens and utilising their position for one another, rather than a sovereign’ (pg 104)

‘The photographed individual remains entirely outside the economic transaction’. (pg 107)

‘To put it another way, the form just the civil contract of photography takes us the form of mutual obligation that precedes the constitution of political sovereignty’. (pg 109)

‘Photography … is an instrument that thwarts the restriction of citizenship to a particular nation-state’. (pg 118)

‘To give expression to the fact that a photogrophed person’s citizen status is flawed … whoever seeks to use photography must exploit the photographed person’s vulnerability’. (pg 118)

Miki Kratsman’s 1998 photo of adead ‘migrant worker’ turns him into a bearer of grievance – not of the worker himself, but if the dispossession of citizenship. (pg 121)

Photography as an impartial judge? (pg 121)

‘The Palestinians became citizens of the citizenry of photography long before there was an possibility of their becoming citizens in the ordinary meaning of the word’. (pg 131)

‘The Civil Contract of photography is not a specific contract made with a specific photographer, but the expression of an agreement over certain rules among users of photography and the relation of those users and the camera’. (pg 157)

I find Azoulay’s chapter ‘Emergency Claims’, essentially on Palestine, interesting but, frankly, more related to how the media is used to support the State’s policies, than it is to how photography can give back citizenship to the dispossessed.

Her comments contrasting ‘statement of horror’ to [my words] ‘manipulated and normalised news’ seem almost counter to her own arguements for a kind of absolute power in a photograph vis a vis the spectator’s gaze. Puzzling. (pg 187)

On ‘Getting Rid of the Distinction Between the Aesthetic and the Political‘, 2010.

Second claim – the photographer makes a significant series of choicesduring the photographic event and regarding the look of the final product – the photograph – beginning with the actual decision to point the camera at a certain event or person and up to decisions as to color or camera-angle that will determine the tone of the frame. (pg 252)

‘ … a photograph is never merely a product of material in the hands of an individual creator. A photograph is the space of appearance in which an encounter has been recorded between human beings, an encounter neither concluded nor determined at the moment it was being photographed’. (pg 252)

‘ … as I have said above, the political is not a trait and cannot be attributed even to images whose contents address explicit political issues. The political, even in its minimal sense, is not compatible with a trait of an image or of a person because, as previously stated, it only exists where people are assembled, and it disappears when they disperse. When one considers the presence of the photographed persons, it becomes clear that the photograph was created and is shown in conditions of plurality.

Even when the photograph does not show people, the area in which it was taken is always an environment created by human beings to be dwelt in. The photograph by itself is not political but the space among people, where it takes place, can potentially become political’. (pg 253)

Each one of the three realms of vita activa – with their three dimen sions of action, speech and gaze – can be characterized by behavior patterns, rules and their own norms that distinguish them from each other:

‘The first, the orienting, is exercised constantly by each and every individual; the two other forms of gaze, speech and action need, as I said, the information it produces.

The second form is exercised more selectively in realms of knowledge, interest, training, profession, craft or art. It is accompanied by specific authority and constitutes it, such as the artist’s or the physician’s authority. It exists between the professional subject and her professional environment and specific objects within it, and does not require the sharing of objects of knowledge, action or gaze but rather accounting for their results, subject to the disciplinary or institutional rules within which it acts.

And the third form of speech, action and gaze, not subject to disciplin ary or governing rules, is a form that exists in plurality. First and foremost because the object of the gaze, for example, is not demarcated a priori, and everyone may arrange it differently and turn any gaze and gazer into an object.The action principle of such a civil gaze presupposes non-subjugation to external authority. The intervention of such authority directly damages not only the gaze of several individuals but also the open principle of this space itself, that must remain shared, un-possessable, not enslaved to a spe cific group, regime or realm. (pg 257)