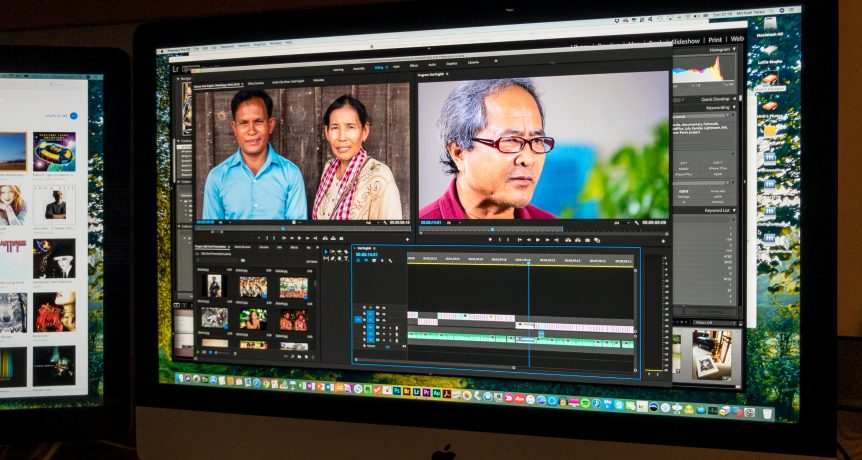 I am exploring the long-term impact of the Khmer Rouge Genocide, and especially its impact on education. This includes revisiting our family history with that country and its people.

Rather than creating a documentary about that Genocide, I see it as contextfor the real focus of my project, which is capturing and making public the unfinished stories from Cambodians, and particularly from Sarath and his family.

So, what work has been accomplished during this module?

In working through the ‘photography without a camera’ project, I re-discovered cyanotypes. This led into the creation of more purposeful images than shadows of flowers, and got me exploring negatives as a way of asking my audience questions about what they are seeing. These are the subject of my Landings contribution.

There have been other photographic projects this module, which have led to reflections on my practice. I shot the politician Owen Smith, during an anti-Brexit event.

Somewhat differently, I spent 4 days documenting the visit of Andrew Mlangeni. Andrew was a cell-mate of Nelson Mandela during the Apartheid years, and was in London to receive the freedom of the City, amongst many other things, such as meeting the Royal Family.

As I reflect on these events, I believe I am doing a technically solid job, appreciated by my clients. The images contain environmental context, and the subject’s character comes through.

But I am observing events, indexically and rather dispassionately. I am not ‘in the picture’. I am being a press reporter. I am striving for more than that in my Cambodia work.

I was in Cambodia again. I had several objectives for the trip, reflecting both imagery needed and changes in my photographic practice:

With my colleagues and friends, Sarath, Simeth, Sireidy, we went on a road trip up north, to the ex-Khmer Rouge areas.

We visited some of the schools that we were involved in building, met the staff and children. Part of this was rephotography of the places and people involved, and part was seeking new stories.

I had met Chheng Den several times before, at a school near Trapeang Prasat. Yet only on this trip did I hear that her son, Metta, who started in the school, is now doing a PhD in Japan. A wonderful example of the positive power of education – and a reminder that I had done a less than stellar job of capturing data on our previous visits. I have significantly changed my documentary process.

Perhaps most importantly, the people that I was with – who I’d known for 20 years – started opening up, and telling me their stores, some that none of us had ever heard before.

Let me turn now to one of several development areas that I see are required in my practice –Intimacy.

My work historically has tended towards the observational, indexical. Whilst this stands me in good stead in covering event or reportage assignments, it is not getting the emotional impact in my images that I need for the Cambodia project,

The movement towards ‘traces’ in my contextual (and landscape) work is starting to nudge those images in an interesting direction. The combination of physical closeness, abstraction and focus on detail to engage the viewer shows promise, and could apply to my portrait work.

Abbie Trayler-Smith‘s image, which took second prize in the Taylor Wessing contest, shows rapport with the subject. The girl’s haunting (or haunted?) expression speaks volumes about what she has experienced, and poses questions about her story. To be critical, one wonders if eye contact would help even this terrific image?

On this last trip, I therefore consciously explored different approaches to portrait work.

I think this is an impactful, stark execution. But on reflection it needed more time to shoot, with a better lighting setup, to be technically excellent.

I also photographed the neighbours of Sarath. In conversation with them, we came up with the idea of picturing them with portraits from their past. That could be a theme to further develop, linking past and present in a way that begs questions.

And, I did further explore portraits of Sarath. I do think these are stronger than the candid portraits that I produced in Positions & Practice. But I do not want to document everything via‘photographic storyboards’.

Nor do I want to use stereotypical, Hollywood style ‘walk in the jungle’ images.

I had already decided to use video as part of my project, so I also experimented with that.

Let me turn now to discuss my work on context and environment, which also needs to feature in any final project.

Part of this project is to go back and rephotograph sites that we have been to, many times before.

This is Choeung Ek, the Killing Fields, and you can still see the many shallow graves across the site. I have been taking photographs here since 1994. The signs – well – they are still there, very much the same, although things are now built up and controlled.

I did try some rephotography, but frankly the way I did it was a bit of a trope, so not really satisfactory.

I have always looked-for stories when I’ve been taking landscape and urban images. But I am not a landscape photographer in the sense that I carefully set up the scene, use a tripod and so on. I am more a street photographer ‘in’ the landscape.

So, I have naturally looked-for details, inside the scene. This has been partly why I have gravitated towards the ‘traces’ idea.

In earlier work, I created images which could be (and were) critiqued as ‘dark tourist’ photographs. Rather literal records of the museums and mass graves associated with the Genocide. I thus went back to Tuol Sleng, to take more pictures.

First, a rather straightforward ‘’ of the cells.

Then an image of the same place that begs questions – why that number, what does it represent, who was in that place etc.?

It is not just about taking close ups or abstractions. It is about considering the implications of the image, including how and in what context it might be viewed by an audience.

My traces work is inspired by, amongst others, Sophie Ristelhueber. In some ways she ‘defined’ the concept of Aftermath photography, with her work in Iraq, in 1991, published in Fait. Her work is compelling, moving from large scale to close in, from aerial to details on the ground. taken together, the work has a clear narrative. However, whilst graphically strong and with a very clear narrative, again I find this somewhat observational.

Christian Schwager made a series My Lovely Bosnia (2003 – 2005), around the still-present land mines in the landscape. Some of the images are specifically illustrating the landmines ‘in situ’, with demarcated areas for clearing. Others show the beautiful countryside. The overall effect is engaging, almost poetic, leading the viewer to consider the impact of war on landscape. Somehow, though, I feel the need to be closer, to make the viewing more personal, from the viewpoint of the local inhabitants.

Almost at the opposite extreme, Adam Broomberg and Olivier Chanarin created a series on The Red House a prison and torture facility for the Baath Regime in Iraq, in 2006. They focused on the graffiti.

This is very much in the ‘traces’ genre that I am exploring. Again, engaging, and also more personal. Who were the people that made this graffiti, and what happened to them? Yet, it lacks the context of the prison. Taken out of that context, some of the images could be almost anywhere.

So how has this impacted my Work in Progress?

I decided to focus on Sarath’s ‘trip through the wood’ to see his Mother, during Khmer Rouge times. I blogged about this story in my CRJ.

I had set about shooting ‘landscape’ traces on my last visit, and have creating a series of images which implies Sarath’s story, rather than which attempts to be a visual storyboard of his journey.

Beyond this portfolio, there is a lot going on

I am conducting a Street Portrait Workshop in Bath, this weekend.

Some of my ‘traces’ images are featured in a PhotoBath group exhibition in September. It is also in a book due at the same time.

And I am working ‘by remote’ with Sarath to create a book of stories, which we hope to publish in Cambodia, in Khmer, in the next few months.

So, in summary, I believe that this Surfaces & Strategies module, as well as the feedback I received on my Positions and Practices portfolio is significantly shifting my practice.

I am talking imagery in a more mindful, almost abstracted way, whilst retained the strengths I had in capturing context. I am aiming for a more consistent, intimate approach, which I am now starting to better define. And I am continuing to explore new media and modes of presentation of my work for eth eventual audiences.

Thank you for listening