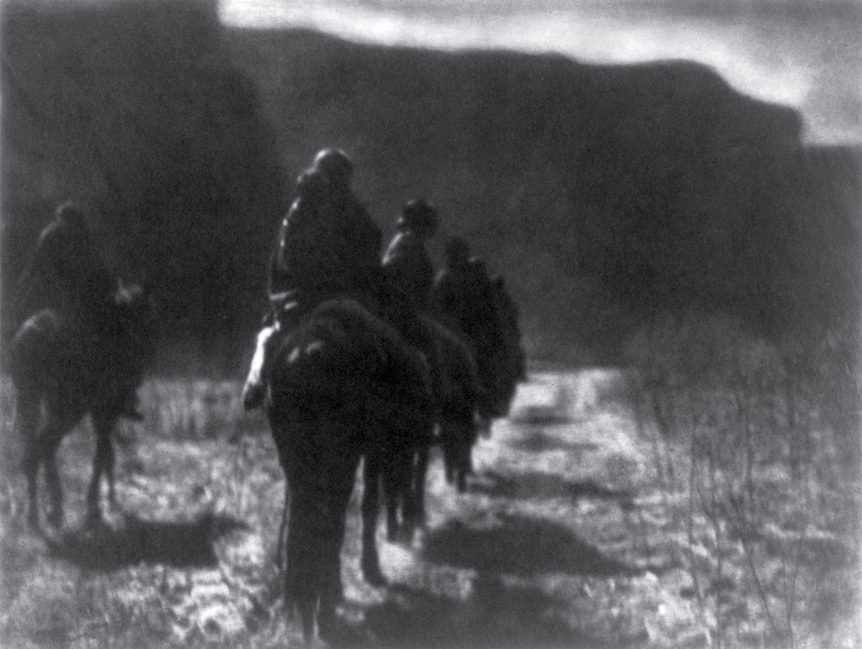 I have just finished reading Photography’s Other Histories, edited by Christopher Pinney and Nicolas Peterson. It is a well-researched work covering a lot of ground on two broad issues – the mainly European/Western use of photography with ethical mindset of colonial thinking, and ethical early use of photography in a few selected non-European countries.

There are many examples of both conscious and unconscious colonial gaze, and it was fascinating to read how Japan used ‘scientific colonialism’ (including photography) to justify its takeover of Manchuria. Misguided attempts at the use of photography in anthropology were legion – for example, the taking and then distribution of photographs of sacred (and secret) Australian Aboriginal ceremonies.

In the essay Supple Bodies, by Christopher Wright, Captain Francis R. Barton’s (1865-1947) photographs of (mainly) young, semi-nude Papuans. ostensibly to document tattoos was also covered. He went so far as to draw on the girls bodies to make sure the tattoos stood out on photographs. He was a self-declared amateur anthropologist, and his work is in the Royal Anthropological Institute.

Of course, all of these should be put into historical and cultural context, but much food for thought.

It led me to download the Australian Institute of Aboriginal and Torres Strait Islander Studies Guidelines for Ethical Research. This is now being updated, although it is probably already a ‘best in class’ statement.

I want to highlight one article in the Pinney & Peterson book, by James Faris, Navajo and Photography. He has conducted longitudinal studies of how the Navajo have been portrayed – from the times of the US attacks against Native Americans to the present day. I am not going to get drawn on the politics of Genocide – though the case is compelling.

Instead, I was drawn to Faris’ framework for looking at the photographs, reproduced here. 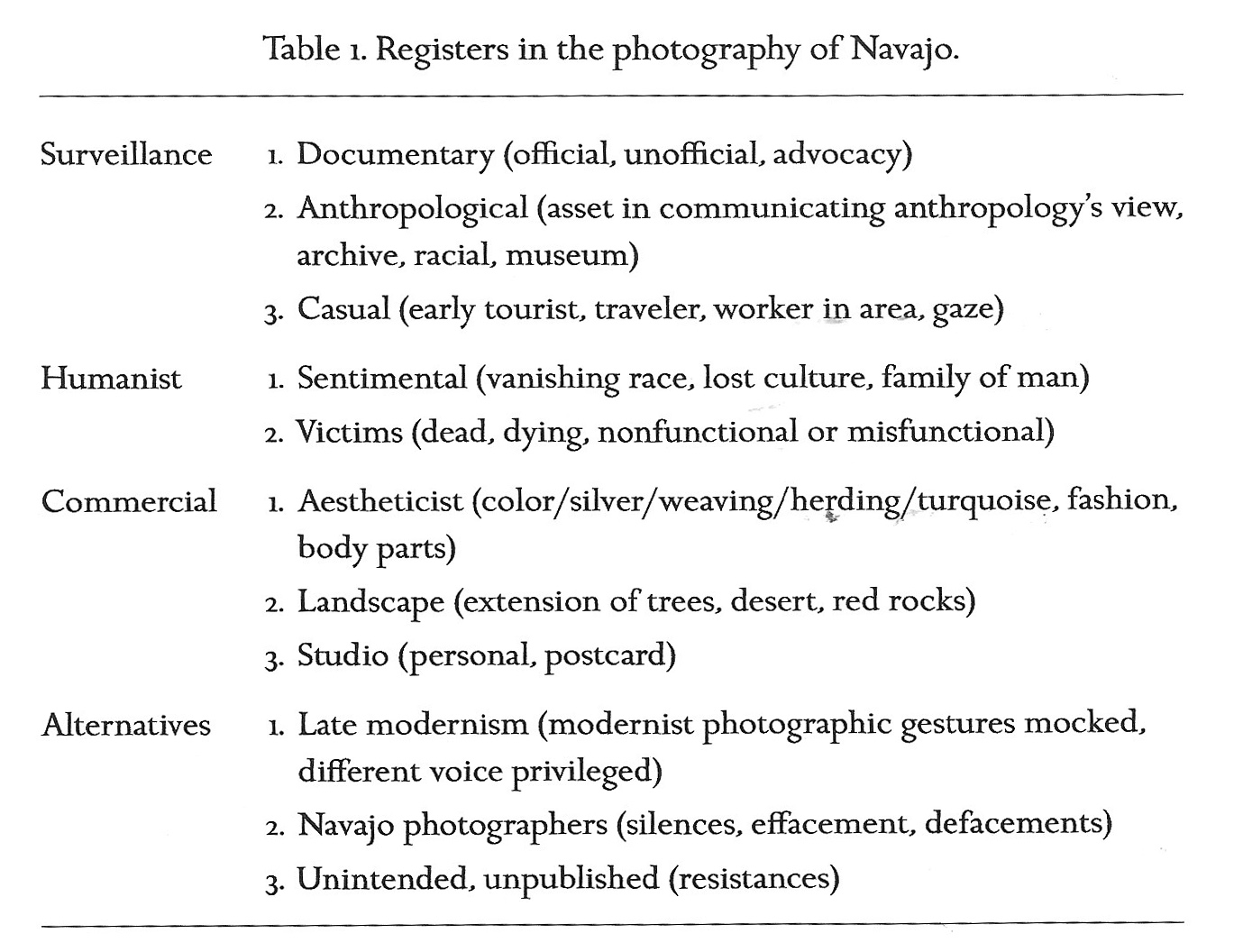 James Faris. 2003. Registers in the photography of Navajo.

This ranges from the relatively banal and good-intentioned, to the crass. What is very clear was how photography was used to perpetuate and distribute stereotypes.

The header above is Edward S. Curtis’ (1868-1952) Vanishing Race, a posed photograph showing both a romantic view of the Navajo and their ongoing demise. Time magazine notes:

‘Fearing the imminent disappearance of America’s first inhabitants, Edward S. Curtis sought to document the assorted tribes, to show them as a noble people – the old time Indian, his dress, his ceremonies, his life and manners.  … Curtis turned these pictures and observations into The North American Indian, a 20 ­volume chronicle of 80 tribes. No single image embodied the project better than The Vanishing Race, his picture of Navajo riding off into the dusty distance.

Theodore Roosevelt, a contemporary of Curtis’s and one of his most fervent supporters, wrote the following comments in the foreword to Volume 1 of The North American Indian:

‘In Mr. Curtis we have both an artist and a trained observer, whose work has far more than mere accuracy, because it is truthful. … Mr. Curtis in publishing this book is rendering a real and great service; a service not only to our own people, but to the world of scholarship everywhere’.

Not many words here about the Navajo or other tribes, and their plight as they adjusted to the ‘new world’. Indeed, some of Curtis’ photographs were of westerners in indigenous dress, and others were posed.

It seems very clear that this is a story told for Westerners, about the demise of the Navajo, rather than any attempt to document (or even celebrate) the uniqueness and importance of the Navajo culture.

A strong case could be made for Curtis’ overt complicity in the long-term stereotyping of the Navajo.

The author of the article, Faris, notes that:

‘It should be clear that these sorts of photographs are an early pastoral version of advocacy or victim photography, such as represented today by people like S. Salgado or S. Meiselas – the aestheticising of misery‘. (2003: 93)

Whilst I do not agree with him about either of these photographers, (see one of my Salgado posts), the general point that he is making is valid. Curtis was funded by J.P. Morgan (a $75,000, 3 year grant), was published by Harvard University, and was well regarded by the US Bureau of Indian Affairs. Yet the work is as much political as photographic.

An example of Curtis’ ethnographic photography is one of his many ‘deadpan’ portraits of Navajo women. 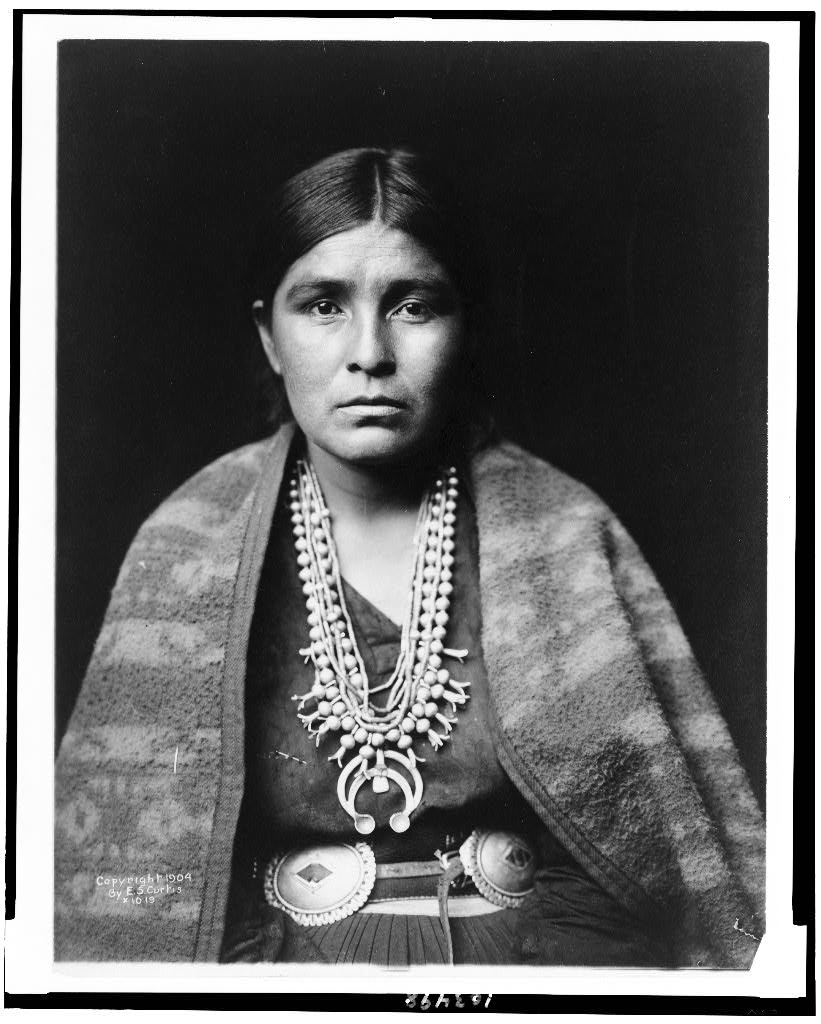 Clearly posed, with a ‘vanishing’ background. the end of an era, perhaps? Interestingly, the jewellery belonged to Curtis.

On the other hand, Curtis also took this beautiful image of the same woman 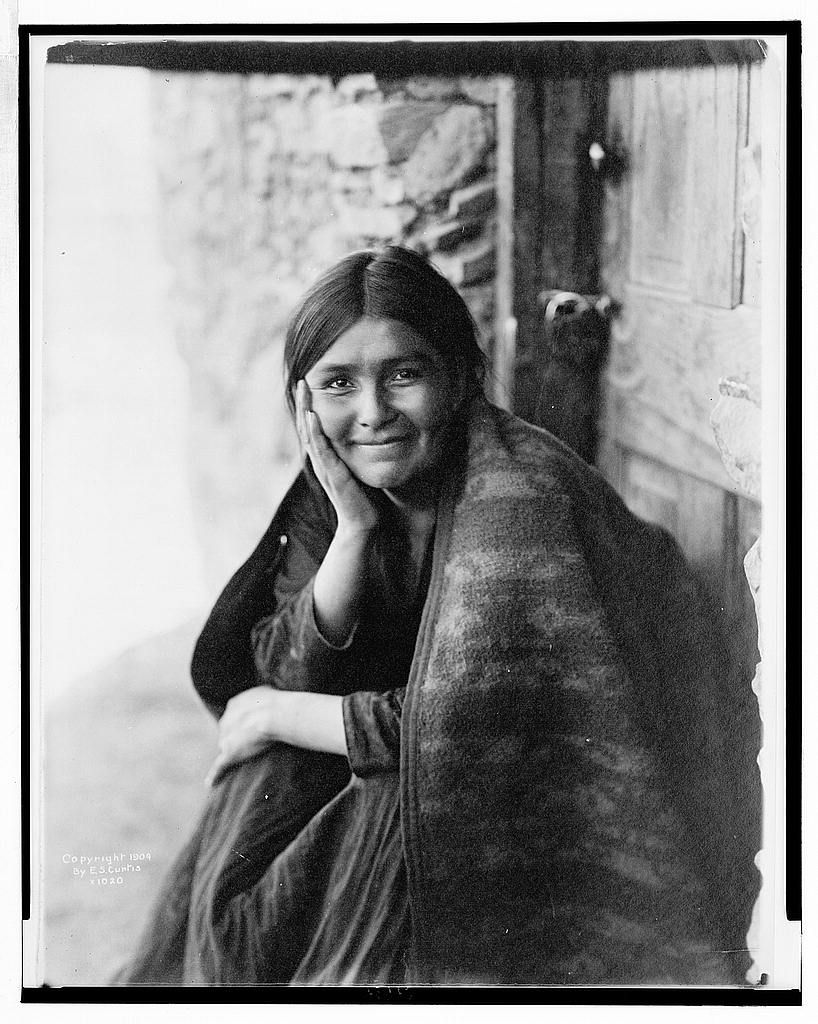 An excellent, relaxed, and quite modern environmental portrait with some interesting insights into the woman’s life and surroundings. She was clearly at ease with Curtis, and there is no sense of ‘past’ here, only of future.

This makes two points for me. First, what has been chosen to represent Curtis’ work (the header, for example, featured in Time Magazine’s Top 100 Images list) is at least as much to do with editorial and political considerations as it is to do with the photographer.

Second, when dealing with the ‘colonial / white’ gaze, it is possible to take respectful photographs which both record the ethnographical details and shine with humanity. That is where I see both Salgado and Meiselas situated, and something I aspire to.

Stepping back to Faris’ Registers, whilst a good list he seems to take a determinedly negative view of the possibilities. I think it is missing some key ideas.

First, politics. This should be overt, and can reflect either the negative gaze and intent of the coloniser, or the positive work of indigenous (or other artists) to fight against the injustices of such gazes. In simply calling these ‘alternatives’ Faris misses the point.

Second, humanity and respect. Curtis himself took some photographs in this way. I would argue that Vroman almost always did. There is nothing to prevent a good anthropological image also having deep respect for the subject.

Third, discovery. This refers to both the subjects of the work, and the eventual audience. This requires an awareness of the possibilities of collaboration and participation.

There is a quote on the AIATSIS website referring to the acceptance and power of its mission amongst indigenous peoples.

There is a lot written today about ‘collaboration’ and ‘social engagement’ in photography. (see Anthony Luvera). But it seems to me that is nothing new in the history of the medium. It is just we now vocalise it, and arguably with too much self-importance on behalf of the photographers who make the claim.

Fourth, consent. Whilst hard to get clearly in place (and from the right people), that does not eliminate the need for it. The AIASTIS principles underline that.

I expect to be touching on these points, at least peripherally, in my FMP submissions.