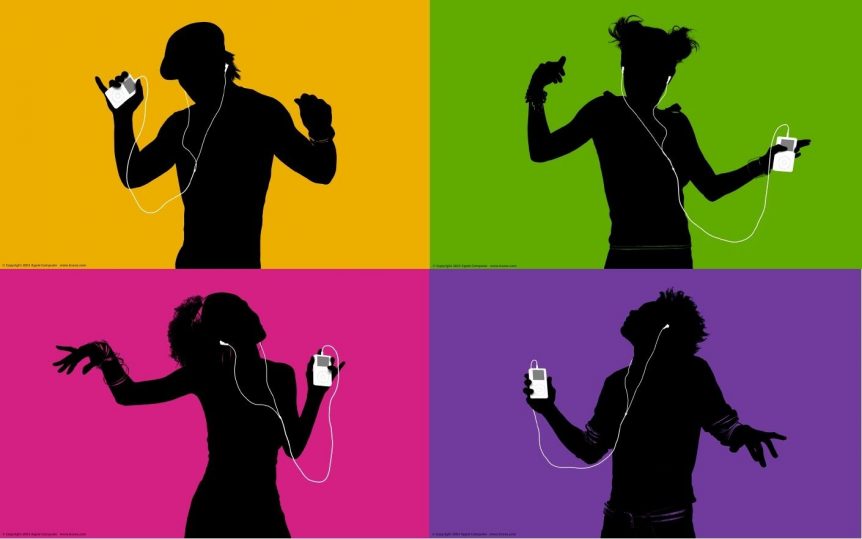 She concludes that ‘advertising only “makes sense” when it resonates with certain deeply held belief systems’ (Undressing the Ad, pg  5).

I have been reading with great interest the posts on Canvas regarding the ‘reading’ of ads, considering the dominant reading of an ad (essentially suggesting the meaning intended by the maker of the ad), an oppositional reading (the viewers unexpected and often negative response the the ad), and a negotiated reading (where ‘movement’ occurs to create meaning, often with compromise). And I find myself agreeing with many readings, especially on stereotyping and cultural clumsiness.

First, I have to make a disclaimer, as I was in the ‘advertising industry’ for over 30 years, responsible for marketing in literally dozens of countries – admittedly, though, on the brand manufacturer side, rather than  in agencies. I commissioned, critiqued, and approved ads of all kinds.

The issue of stereotyping and culture is writ large in any comments on advertising – as is that of time, where social and cultural perceptions of what is essentially good and bad changes. 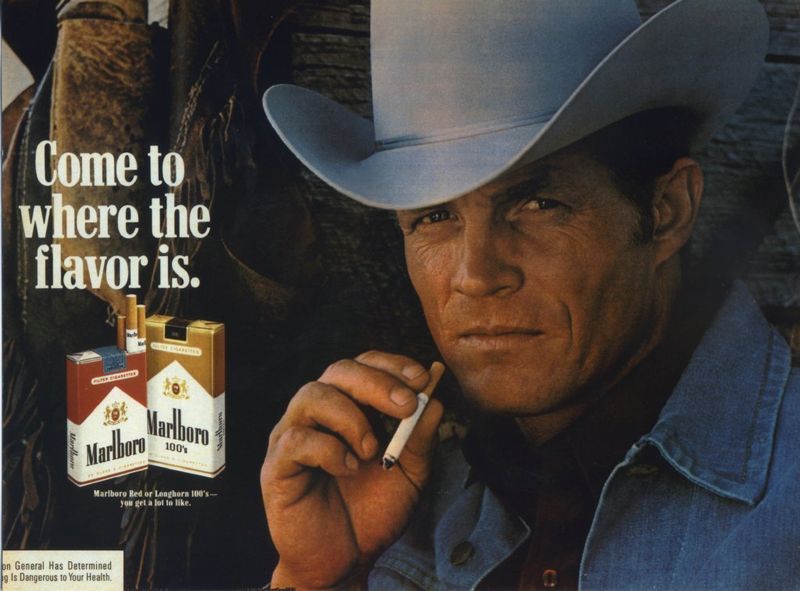 Cigarette advertising is a case in point. I admit to a fondness for the imagery of Marlboro Man, with all its not-at-all-subtle encoding of the male stereotype and American cultural aspirations.

The reason for that fondness is not because I approve of smoking. In fact, Eric Lawson, pictured in the undated Marlboro ad above, and provided by his wife to the LA Times, died in 2014. He was the fourth Marlboro Man actor to die of a smoking-related disease. Ethically, the campaign, with the benefit of hindsight and time, is seriously flawed.

Rather, my fondness is because I recognise that there was a clarity to the Marlboro advertising, both in its core idea and its execution.  It has a classic and overt linking of a physical product (and its brand) with imagery aspirational to the target audience, sustainable over time. There was also consistency in the core ideas, messaging, aesthetic style and composition.

I won’t go back to the debate on ‘icons‘, but the brand and its advertising are still ‘icons’ to this day, as recognised and appropriated by Richard Prince. 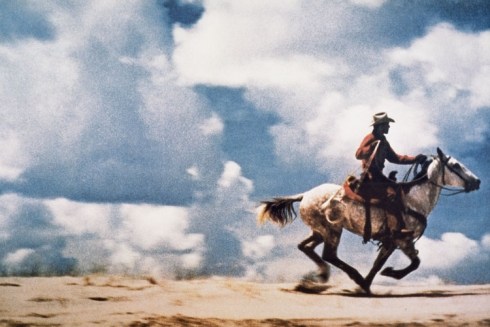 So, my contribution is to offer an advertiser’s perspective on how ads are created, bearing in mind that I have had at least as many duds as successes. I would like to focus on Frith’s ‘intended and cultural meanings’.

First, there is always a ‘target audience’. The phrase ‘mass media’ suggests otherwise, and today’s social media channels seem to think that they have invented ‘targeting’. Not true. The target has always been there. This could include activities (homemakers), demographics (age, new families etc.), aspiration oriented (including sexual conquest), or political (consider the UKIP poster) and so forth. All that has changed is macro to micro targeting – and even that is suspect (for another post, perhaps).

Then, advertising has always been culturally specific – as well as reflecting political, financial and business context. It is no surprise that many examples quoted, good and bad, are American – essentially the business of advertising was perfected in that country. My first job, in the 1970’s after Uni, was with Procter & Gamble. The company are generally reckoned to have invented branding in the 1920’s.

I learnt that effective advertising must be targeted and be socially/culturally appropriate. One can argue that Apple advertising crosses cultures, appealing to the very large global tribe that wants connectivity – the header is from the iPod launch. Apple are careful to avoid most cultural bear-traps.

On the other hand, consider this:

Yes, the Global market for skin lightening products is huge – estimated around $4 Billion today (I think that this a gross underestimate). There is a long cultural tradition of fairer skin equalling a higher standard of beauty. In China, the Legend of the White Snake, also known as Madame White Snake, is a foundational fairy tale, often now simply called ‘The White Lady’ (of Hangzhou – where the prettiest ladies live).

Many viewing this from a Western perspective would consider skin lightening offensive and maybe even ‘imperialistic’. In fact there are campaigns to ban these products. Yet, the market is expected to double in the next few years. And it’s not just for women. Here’s a fairly new Indian product: 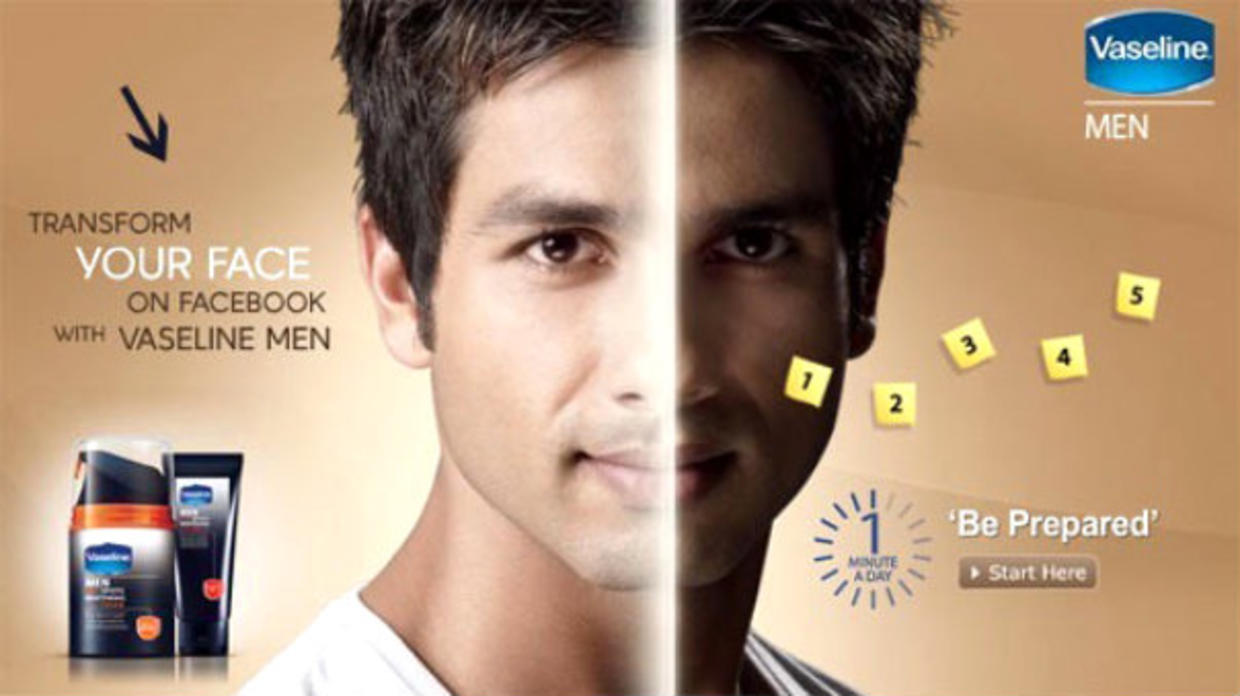 So, cultural consideration is always a part of advertising, as is the target audience. Which leads naturally to the critical question ‘What is the Big Idea’ that can appeal to possible buyers.

Before we get to a semiotic analysis of the advertisement, I was taught (and in fact used to teach) that the best ads:

1. Have a ‘big idea’, which provides a needed benefit for a specific target audience, including location and culture. Sometimes, it is an unmet need, a latent need, revealed in research or by pure genius creativity – Steve Jobs and the iPhone, for example. Others are obvious when you see the ad. Fair & Lovely is an example.

2. Offer supporting information, hard data or visual proof of why the product or service actually works. You can see that in the fairness products. That is less hard to read in Marlboro, other than the overt linkage of product and lifestyle.

3. Are created with the appropriate style, imagery (both overt and implied) and aesthetics which are both relevant at the time and have longevity.

Naturally, many ads do not do all of this, but it is a framework to help both creation and subsequent decoding.

Barthes, in talking about advertising, said:

The advertisers denoted meanings are included in the framework I suggest – the signified. But, I would also submit that the advertiser attempts to influence the connoted meanings, especially by understanding and addressing the target audience/viewer, culture and the aesthetic framework.

Yes, the viewer might have a different interpretation, but that does not alter the advertiser’s intentions to provide as ‘complete’ a meaning as possible.

Years ago I was lucky enough to be General Manager of a Category at P&G, in the USA, whose brands included Crest toothpaste, at the time the long-standing market leader.

Crest’s insight was that people did not want to endure the pain of dental surgery – no cavities. That was more important than pure cosmetics. To support the claim, the brand got the first recognition from the American Dental Association. And it was all executed in a family oriented, fun but professional way – no tricks.

Here is an early ad – before my time (!), although we used similar ideas – the big idea and appropriateness to the audience had sustainability over time. 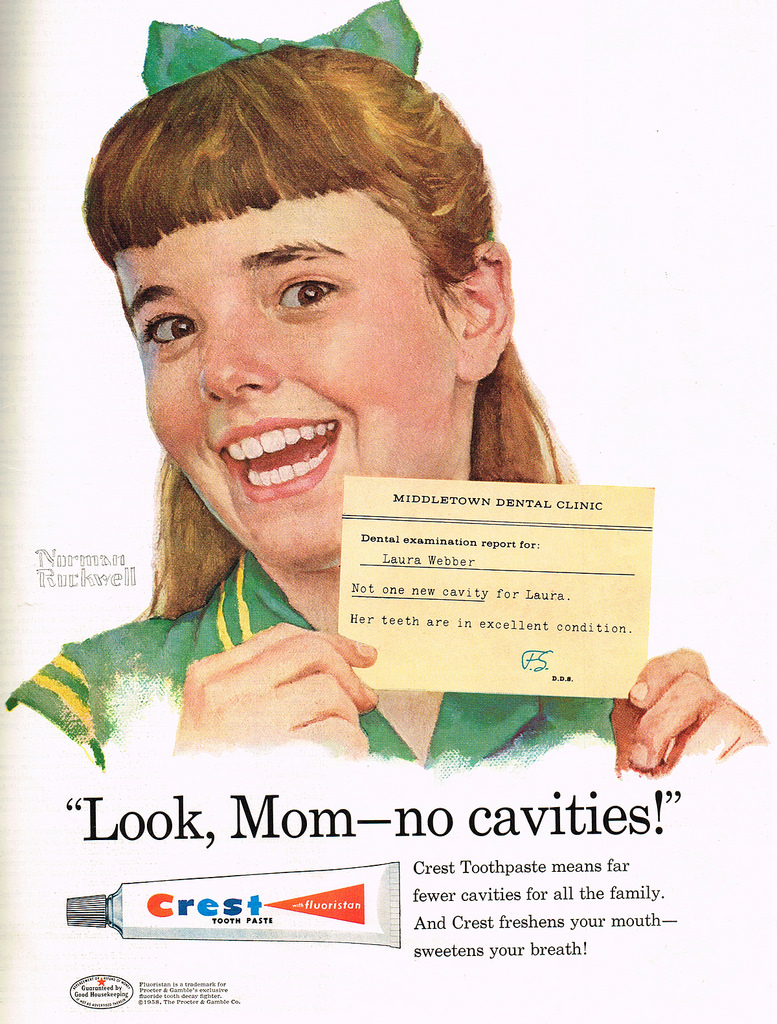 Let me finish with another brand that I once had responsibility for – the Japanese premium skin care product SKII, when we lived there. This is hugely expensive, and features a unique ingredient, Pitera, a yeast discovered by monks who found that in making beer, their hands stayed youthful looking.

Here is a how the brand is presented online in Japan, featuring a young celebrity. 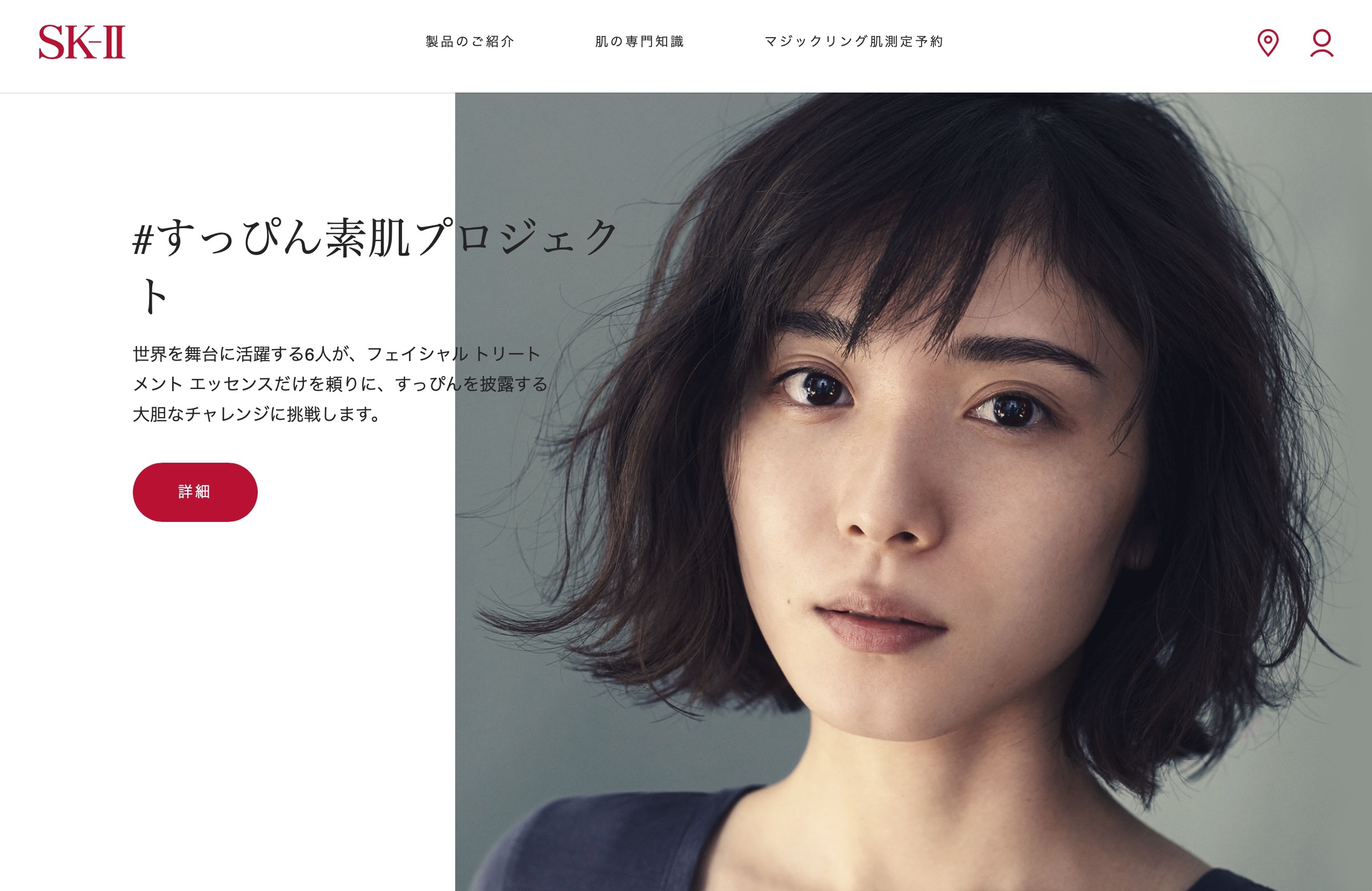 And here is an example TV commercial, with subtitles, which might explain a little more.

I wonder what people think?